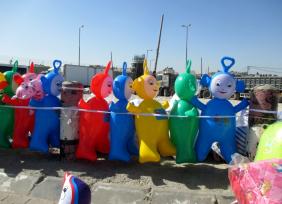 Only after he stubbornly repeated the sentence over and over and said he’s going, and an additional broken sentence in the language in which we communicate, his non-Hebrew and my non-Arabic, only then did I understand that in two days “he” is being released from jail, and I understood that perhaps the man, unconsciously, was being more accurate than me, and that not the word is important, but the essence, that release from jail, the transition from being a prisoner to someone returning to live at home, with his family is, for the person being released, truly a journey.

It’s not an imaginary journey, but one that was imagined and practiced and dreamed of and filled his days and nights and those of thousands of others like him, which preserved him and them during those days, and particularly during the nights, and which accompanied and warmed them when it was cold and sent them a breeze to ease the stifling imprisonment and relieved their longing and loneliness and wiped their tears and cradled their bodies.

That journey, an existing, invisible dimension, is the strength and the power of the person who survives.

I wonder who is that boy being released after seven years in prison and what happened to someone whose youth was robbed and to the mother whose son was stolen from her?

I’m also trying to imagine what the graveyard of youth and losses looks like and where it is and what’s engraved or painted on the gravestones?  For if not there, what becomes of the memories and where will the boy inter them and how will he bear the weight of the pain of all he experienced there?

But he, the boy who “is going in two days,” and who is unique in his parents’ eyes, is far from unique in the society to which he belongs, only another example of childhood shattered and youth erased under the weight of occupation.

And the man telling us, a relative of the boy who “is going in two days,” is one of many who are no longer able to support their family in their place of residence and must seek a living elsewhere.

He and his brother, who live in a locality near Hebron (“Come to Kiryat Arba, we’re right nearby, come visit,” he invited us), a place whose residents have for many years been victims of the army’s terror and the settlers’ abuse, and in order to have money “for bread and milk for the children” (their words) they left home, jointly rented a dwelling unit in the refugee camp and each day move among those who arrive at the Qalandiya checkpoint and offer whatever they can sell.  They return home to their families only on weekends.

And the same day on which he told me about his relative, the day he said “he’s going in two days,” he was selling inflated Teletubby dolls.  Colorful dolls, potbellied, the size of a child, standing in a straight line.  Dolls whose ears are deaf to the story of the boy being released, who is 22 years old, and their wide eyes gaze blankly and don’t see the man telling about him or the people who say nothing and the chasm yawning between them.

There are no customers in Iyad’s store in Hizma. 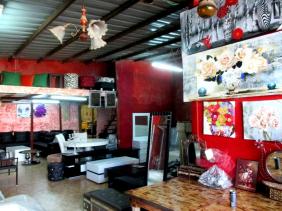 Since the day the army blocked all the entrances to and exits from the village two weeks ago and set up barriers and erected a sign calling on the residents to hand over those who “violated public order” (thus), and reopened the village only three days later, Jewish customers no longer arrive.

The ones who arrive are representatives of the Civil Administration who issued demolition orders for houses located only a few hundred meters away from Pisgat Ze’ev.

And the army also continues to show up and harass:  armed soldiers patrol the village streets, close the entries and exits for an hour, two hours or more, like on Sunday when the village was under a closure

from six in the morning until ten, or ten-thirty, according to Ayyad.

And not only Ayyad’s store is empty of shoppers, all the stores and businesses are, most of whose income comes from sales to Jewish customers, because it’s cheap here.  You’re expensive, Ayyad says.

An armored car was parked at the Beit Hanina junction.  Border Police soldiers got out to hunt people: 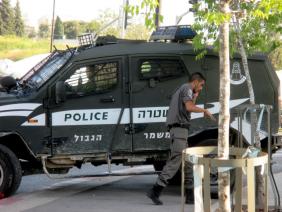 They stopped a bus carrying Palestinians from the West Bank, told the driver to open the door, two armed soldiers entered, searched, apparently found, and ordered the driver to drive somewhere with them.

Again collective punishment was imposed on an entire group of people.

Some of the passengers, if not most, must certainly have crossing permits as required by Israeli law, but simply by virtue of their being Palestinians they have no rights, and who are they to complain?