Refused entry to Israel: Prisoners of the Shabak, the police, and the Civil Administration

Since 1967 Israel has occupied the West Bank (known as the Occupied Palestinian Territories), which is inhabited by close to 3 million Palestinians.  In order to impose itself on the occupied population, Israel has established, among other means, an intricate bureaucratic system: "the bureaucracy of occupation".

A Palestinian resident of the occupied territories who wishes to enter Israel, the settlements or the seam zone (the area between the Green Line and the separation wall/fence) for any reason – employment, business, to work their land trapped in the seam zone, travel to Jordan, obtain medical treatment in East Jerusalem or in Israel, visit relatives, visit an inmate in an Israeli prison, etc. – requires a permit (authorization to cross and be present in the seam zone).  Tens of thousands of Palestinians from the occupied territories are subject to a sweeping “blacklisting,” one of the most serious aspects of the occupation regime.  The blacklisting of Palestinians may be based on the claim they ostensibly represent a security threat (refusals by the Shabak); are being punished for entering Israeli to work without authorization or with forged documents (refusals by the police); because of various debts or being suspected of violating administrative regulations (prevented by the Civil Administration); or for innumerable other reasons.

A significant portion of the blacklistings has no justifiable basis!

Since 2005 teams of Machsom Watch volunteers have been tracking blacklistings.  We document them, submit complaints to the Civil Administration and other officials regarding those blacklisted and assist them to fill out the official forms needed to remove the prohibition on entry.  They have issued a number of reports available on the Machsom Watch website summarizing the information they’ve collected.

Tens of thousands of Palestinians appear on blacklists.  The list of those blacklisted by the Shabak has, over the years, grown completely out of control, and even if, in some areas, many people have been removed from the lists, they continue to grow and Palestinians continue to go back and forth among the occupation authorities in a desperate attempt to be freed from them.  They are denied information about the reason for the blacklisting, its duration and ending date (particularly those blacklisted by the Shabak) and to whom can they appeal to remove the prohibition.  They are therefore caught in a terrible, frightening trap that increases the Kafkaesque helplessness of the occupied population and severely damages its social cohesion.

One of the most important aspects of our teams’ work with respect to the complex bureaucracy of the machinery of occupation is providing reliable and accurate information to those blacklisted regarding the nature of the prohibition imposed on them and the official procedure required to appeal it.  Hundreds of people contact us every month requesting we determine their situation and understand what documents they need to submit an official request to remove the prohibition (personal documents, employer documents) – according to the ever-changing regulations of the District Civil Liason (DCL) offices, the area in which they live or the arbitrary whims of military headquarters.

Those blacklisted can hire an attorney to obtain that information but the fees are usually beyond their ability to pay, and often the information is neither reliable nor complete.  We are careful to provide accurate information about the complicated bureaucratic regulations which are being constantly changed.  We do so in order to minimize the applicant’s frustration as much as possible and avoid requiring them to return again and again to the DCL without knowing what was lacking in their previous submission.

After the required documents have been collected we prepare official requests on behalf of those blacklisted to remove the prohibition (in some regions the laborers and merchants are referred to local offices for this purpose).  They themselves submit the forms to the regional DCL and receive confirmation they were submitted and the date on which a response can be expected, usually after two months.  With respect to DCL offices which make it particularly difficult to submit requests (Jenin and Qalqilya, for example), we are assisted by Tamir Blank, an attorney.

We follow up the handling of these requests vis-à-vis the Civil Administration Public Inquiries Officer and determine what the response was.  When we have an answer we notify the applicant whether the prohibition was removed or their request denied – even in jurisdictions where the DCL also notifies the applicant, in order to ensure that they receive the information.

Unlike what many people believe, we have no influence on the outcome of the appeal.  We have no connection with the Shabak or with the police dealing with the appeals.  We can only provide information to people and use what we know and the fact we speak Hebrew to help them fill out the forms and provide an account of their situation.

Our team dealing with the police blacklist also follows up the services provided by the police officers at the DCL.  Their job is to serve the Palestinian population, but they lord it over the Palestinians and often treat them abusively, and the information they provide regarding very important matters is usually incomplete.  The police officers send them back and forth, complicate and even undermine their ability to arrange what the bureaucracy requires of them.
We investigate daily whether a policeman is present at the Bethlehem DCL and the Etzion DCL (most people who contact us are from those areas); follow-up by phone and in face-to-face meetings with the police officer at the DCL together with the applicant so that he be given the information; and assist them to obtain the documents necessary for dealing with the police file, documents those blacklisted hadn’t been able to obtain by themselves.

A different team assists those blacklisted to obtain permits for medical treatment or to accompany a patient to a Palestinian hospital in East Jerusalem or to an Israeli hospital.  Sometimes it’s a matter of life and death.

An additional team assists people who have been blacklisted because they hadn’t paid accumulated fines or debts.  We try to clear their way through the bureaucratic tangle, understand what the source is of the debt and whether it can be reduced or be repaid in installments.  It’s important to realize that since the Israeli postal service doesn’t deliver to the occupied territories. Palestinians aren’t notified of traffic violations (including a minor violation) by mail and therefore don’t pay the fine in time.  The fines and accumulated penalties continue to increase, and when the person is finally notified of their debt it’s already reached tens of thousands of shekels.  Traffic fines are only one of the many injustices in this area, wringing vast sums of money from the poor and weak.

Two additional human rights organizations should be mentioned who are doing important work with respect to blacklisting:  Hamoked Center for the Defense of the Individual deals with the denial of crossing permits to Jordan permits to the seam zone, refusal of family visits (family reunifications of Jerusalemites) and the refusal of visits to prisoners.  Gisha deals with refusals of travel permits from Gaza to the West Bank.

This interaction provides a rare and important form of contact both for Palestinians and for us.  We’re almost the only Israeli-civilian voice they have contact with.  Most have only met armed Israelis – soldiers, police, and settlers – and the usual interaction involves threats and commands.  We always treat politely those who come to us, respect them, deal patiently, and despite language difficulties on both sides we manage to understand each other, gain their trust and even arouse hope.  This might be the first time in their lives they feel they’re being treated objectively and respectfully, allowing them to understand what they must do and also share heartbreaking personal accounts or descriptions of the ridiculous, frustrating dead-end situations in which they find themselves, the lot of a nation which has been occupied and oppressed for almost half a century.

The significance of all these activities is not only humanitarian, allowing people to obtain crossing permits as part of the struggle for human rights.  Our activities are a manifest expression of our political position opposing the occupation which requires us to take both a principled and practical political stand that fits in with Machsom Watch’s fundamental purpose – to report and document.  This activity allows us to document one harsh aspect of the repressive system run by the Shabak, the police, the Civil Administration and the military commander in the West Bank, backed by the Israeli executive and legislative authorities.

Read more about the INVISIBLE PRISONERS 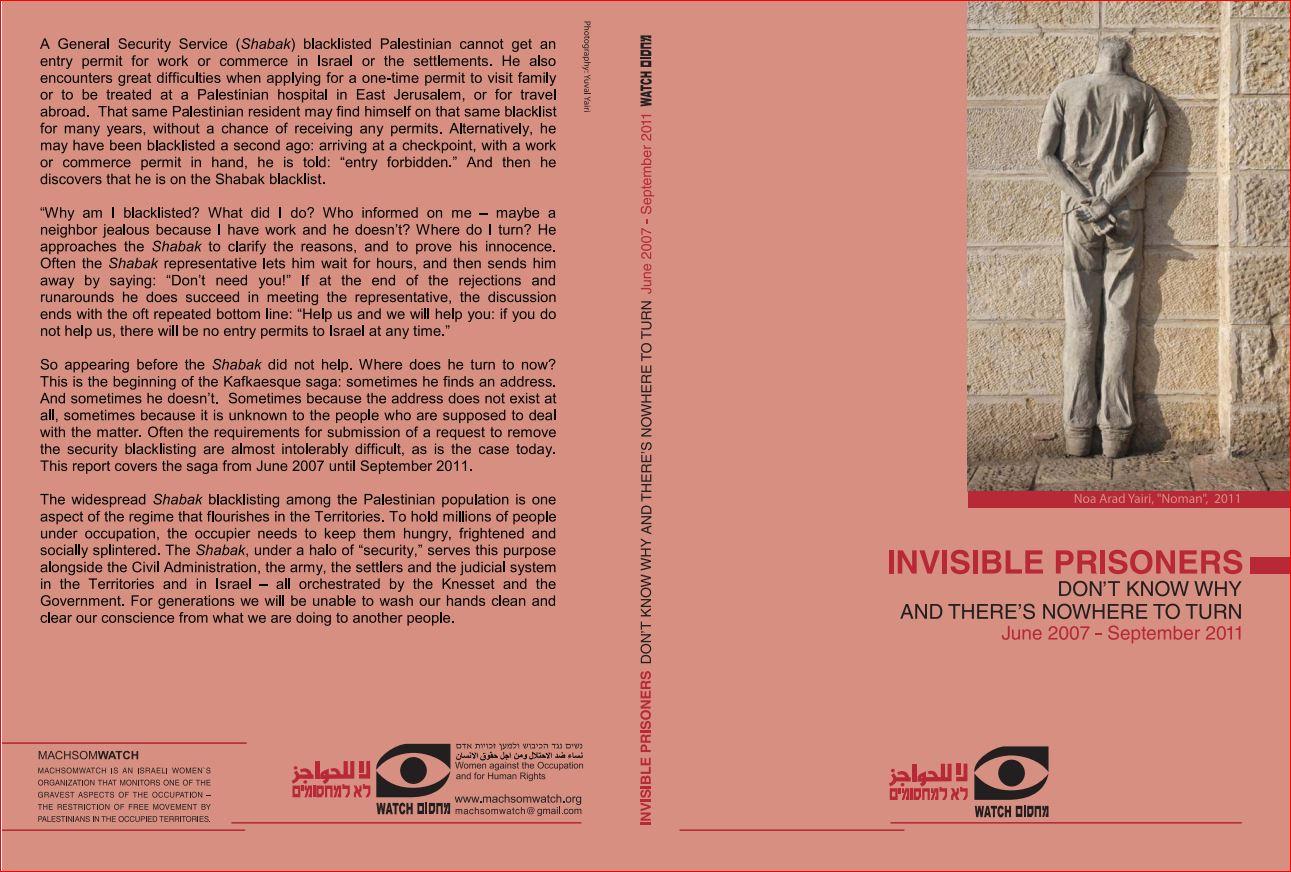