14.10 Qalqiliya with 15 cars and a swift passage. At Azun the entrance is still blocked with barbed wire and mounds of earth and a Hummer is stationed there. At Jit the entrance to the village is opened and the checkpoint not manned.

14.45 Beit Iba, 12 cars moving steadily and people entering Nablus are checked but there is no line. The commander, the evil spirit of the checkpoint screams at one of those standing in the line at the entrance, "Don't look." And again, "Did you hear? Stop looking."  It is not clear at what it is forbidden to look. He also does not know.

15.00 The commander sends us away from where we always stand and says he will close the checkpoint. We show him the letter which forbids him to do so but this does not interest him. He is the commander and is telling us to move off. He says his name is Moshe. We move a bit, thinking to come forward again later but at least to stop the checkpoint being closed in this terrible heat, even if only for a few minutes. We report to Noah and ask her to tell Gabi, our lawyer that she should send the attorney general a report that the commander wants to close the checkpoint because we are present.
Three women are detained. A woman so veiled that only her eyes can be seen is sent to the isolation to be checked and then freed. One of the detained women is freed and another 5 minutes and another as well.  One remains.

The commander is tense because of our quiet presence where we wait for those coming out of the checking. It seems he is looking for someone to send away and so he does sending out from the shed those who are waiting for their relatives or dressing. He sends them out into the blazing sun. I ask him if the shade is only for the Jews and he says that is so. That he would also prefer us not to be there because he says we care more about the lives of the Palestinians than the Jews. The shed is empty but he does not want to see Palestinians. He wants them to wait in the sun. In spite of his wickedness the queues are handled with efficiency.

15.00 Two Israeli students who study in Nablus are detained. 15. 25 Another two are detained.  At 15.30 Moshe, the commander, leaves the checkpoint and Ran takes his place. The evil spirit is relieved by a good spirit. I ask ran for permission to sit on the bench and he brings me one from the checking area and invites me to sit. The bench is long and there is place for others and I invite two women who are waiting to also sit.
The soldiers run in alarm to hunt those trying to bypass the checkpoint. The sentry in the watch tower has informs them that he can see those trying to slip through. The wait in the line is about half an hour. A Palestinian asks Ran to fee the two women in the enclosure. Ran checks but says they are detained for security reasons and must wait for that to end before they can be freed.

15.40 Another detainee is brought in. A soldier brings water to one of the men.

15.45 The two Israelis are freed. Ran explains that there is a military order forbidding Israelis to enter Nablus.
15.50 There is an electricity failure and the turnstiles do not work. But because one is not in order….it dafke works. But the checking is done and it is as if the two turnstiles are working.
Again a veiled woman is taken to the isolation to be checked.

A Palestinian sitting on the bench tells me the following story.

His nephew is detained and he is waiting for him. Each time he is detained because of the last 4 numbers on his ID which the number of a wanted man.  The boy is sick and cannot live far from home in Nablus during the week. So he spends all his time at the checkpoint.

A commotion ensues. A man who passed in the humanitarian line is sent to the enclosure. He opposes this and refuses adamantly.  He is a teacher and as such can pass in the humanitarian line even if he is young. But the soldier does not know this and pushed him to the enclosure. He will not go and it seems was "cheeky." The spectacled soldier is furious and shouts at him "Shut the fuck up! Fuck you.!!" The man is not alarmed and will not move or go into the enclosure. It is not often that one sees such opposition and steadfastness. He speaks English and says. "I want to know why? What did I do? Check my bag. I am a teacher." One of the soldiers says, "You will sit here for a week." The soldiers want to push him in with force. We called Eran who came at once and after listening to the man gave him his ID and freed him to the dismay of the soldiers. The man did not forget to thank us as he left. What luck he had that the evil commander had just left.

16.20 The electricity returns and also the evil spirt…who had chased everyone out of the shed to the sun and terrible heat. The man waiting for his nephew is still there and 5 people are detained. We inform the centre and leave. There is no point in speaking to the commander. There is no line of cars and we go on to Anabta and A‑Ras. 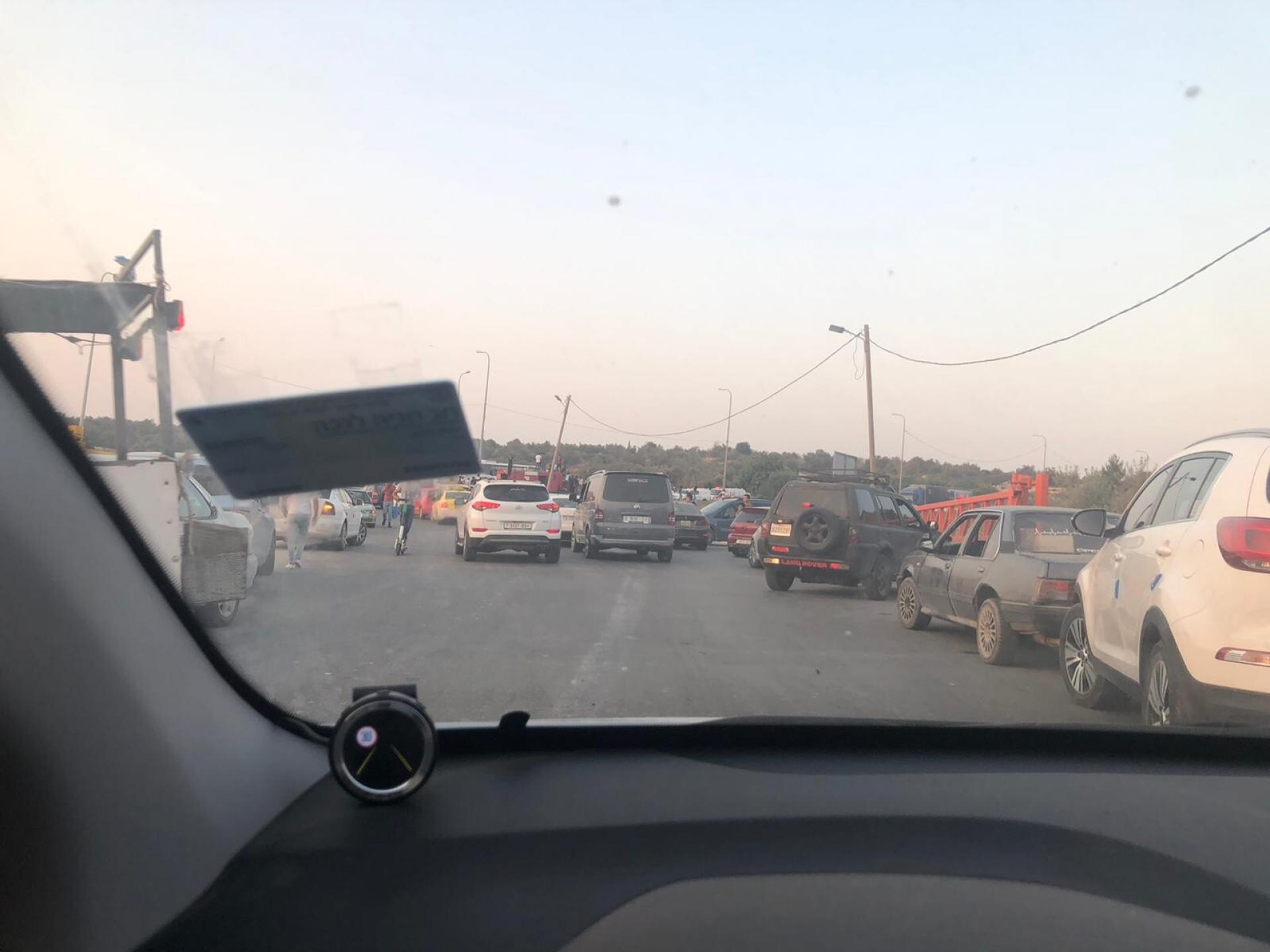