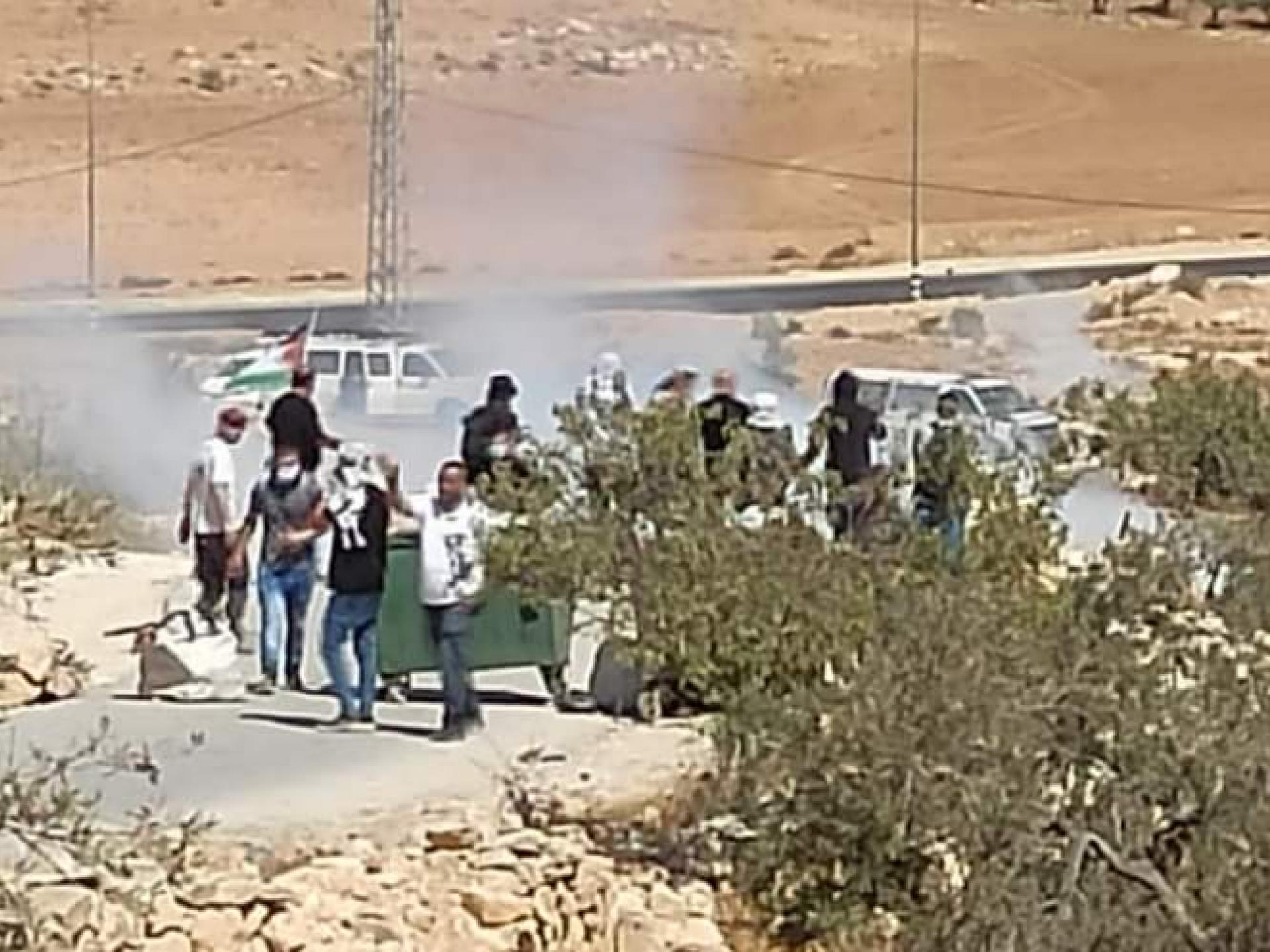 Meitar crossing - the parking lot on the Palestinian side is packed to the brim with cars. This morning many workers were still passing by. They will return early, because in the early afternoon the closure

for Palestinians begins. Not for us, the privileged, of course. I'm not even required to show my ID at the checkpoint on the way back. Muhammad, who does not belong to the chosen people, is required to do so.

We drove along Route 60, to examine the new roadblocks along it. We made a detour: we passed Dura al- Fawwar, the Sheep Junction, and from there we headed towards Zif, Umm El Kheir, Carmel, Ma'on and At-Tuwani (route 317).

There are many new dirt blocks. Along the entire road, starting from the checkpoint, there are dirt embankments, on both sides. On the side of the fence, behind the embankment there is an open area - it was already reported in the past about the bulldozers that uprooted all the vegetation.

Further on - a military observation tent on the left, a barrier in front of Meitarim.

A signpost for Havat Yehuda - a settler from Eshtamoa (the farm is an offspring of the illegal outpost of Eshtamoa, which in the meantime is growing and growing). The farm is located on private Palestinian land. There is also a new way to Eshtamoa. There are many more signposts.

At the signpost for Samu’ (Palestinian settlement), election propaganda of Smotrich is pasted. As with many other signs. Smotrich stars here.

New roadblocks on the left - at the entrances to Deir Shams, which leads to Dahariya and Hebron.

Passage to agricultural lands is blocked. . Blockades opened by the residents are also seen. Literally a dance of rotating obstacles between two unequal forces: the Israeli army, and the difficult life of the Palestinian residents.

Further on - both sides of the road are blocked by earth embankments. There is complete control over the residents' movement options.

I had not been here lately. I started here over fifteen years ago, with Hagit, when there was still no internal peripheral road, school yard, electricity poles, clinic, kindergarten, water connection. Most of the villagers lived in caves.

But there was Maon and Havat Maon, situated on the tops of two hills above the valley of At-Tuwani. Saber, who was a local leader (he passed away several years ago), invited us, at the beginning of the summer, to see a water hole into which the settlers of Havat Maon had thrown a dead chicken, thereby eliminating the hole for that summer. And Tuba's children arrived (if at all) at school by a very long road, which bypasses Havat Maon from afar.

Since then, the people of the village have pulled themselves up by their shoelaces, and there are not enough words to praise them . We also met a resident of the village who was driving a commercial vehicle. But, only one thing has not changed, and has only gotten worse: the violence from Maon and Havat Maon.

We met Bassel, who works at a newspaper, speaks English (he learned from the international activists who live in At-Tuwani). Nasser's son. Bassel is committed to his village - declares that he will not leave and will fight for their right to live and develop the village.

Reported here:  the violent activity of the security forces (occupation) on Saturday, inside At-Tuwani.

It was the intention of the residents of At-Tuwani to organize on Saturday morning to go to Sha'b-el-Butum near Mitzpe Yair, for a demonstration there.

Early in the morning, the army surrounded the entire village, on the surrounding hills - private land of the villagers, and blocked the exit to the road between the settlements. The villagers didn't even have time to get past the clinic. Two jeeps entered the village, accompanied by foot soldiers, and also a special police unit, and started throwing tear gas grenades at the people, and at the houses. The people of the village asked them, over the loudspeaker, to stop, because there were also small children in the area. It did not help. The tear gas was thrown both by the soldiers inside the village and by the forces on the hills.

The army stayed in the village for about four hours. There was also a special police unit and jeeps.

We met, in At-Tuwani, Ashraf Mahmoud al-Amur, from Ar-Rakiz. He speaks Hebrew - worked in Be'er Sheva, and on the Egyptian border, but now he is denied entry, because of the mess in Ar-Rakiz. He said that he built a house with a metal roof (probably a type of corrugated iron). At the end of July, his house was destroyed. They also destroyed the water tank. They returned to the cave they lived in before: he, his wife, and five children.

There are four families in all of Ar-Rakiz. Water is drawn from At-Tuwani. He was arrested last week in At-Tuwani.

Amazing, with what equanimity and acceptance with reality these people report on the ruins of their homes.