9.00  On road 60 there are still manned checkpoints at Dura-el Fawwar.

The new checkpoint of the neighborhood of Kapisha is active, but after a telephone conversation the soldiers let us through. It is not at all clear why there is a checkpoint there.

We went to visit Bassam who is living on the Zion route opposite the House of Contention and his shop of the other side of the street. He tells us that during the holiday a little girl of 8 was knocked over at the House of Contention by a woman settler.  He shows us photos. She was evacuated by the police and Offer Ochana. He said that two days later he saw the woman driving. That is her lisence was not taken from her. The child was taken to Hadassah . Her condition is moderate. She was being operated on while we were there and her aunt told us this when she came with a local reporter.

He tells us that another child was knocked over next to his shop in the last month and was taken to Makassed Hospital in Jerusalem. Her father arrived and told us that she was already at home with her arm and leg in plaster but otherwise all right. And here too the woman settler continues to drive. They are sure that it was done on purpose.  They also have photos of this happening if it is necessary.

Near the Tomb of the Patriarchs, a Border Policeman informs Muhammad that since he is a Muslim, he can not park his car. We show that his ID is that same as ours and that he is an Israeli citizen just as we are. This is a confrontation we had not had for a long time. This is the first time that Ariela has been confronted with an apartheid incident  and she is shocked and tries to convince the soldier that this prohibition does not make sense. We decided to leave with Muhammad and go to park where he is permitted to do. But then an Israeli guide came up to us accompanied by a Japanese reporter who is here for an extended period. He asks us to remain and explain what is happening here. Muhammad insists that we stay and goes off to wait  for us at the parking place which is allowed to him until we should  finish our explanation.  This was very important as just before that they had met Orit Struk who had explained with deep conviction at the settlement there without in any way mentioning the rights of the local Palestinians.

So then we explained about our organization and  our views. The Israeli guide says that his wife is in the army and from her he hears that the army is much more dovish than the government.

Other than that everything is as usual In Shuhada and Tel Rumeida. Emptiness, soldiers, checkpoints and flags.

The army is still there making life difficult for the family.

The family shows us the paper which is signed by Col. Itzik Cohen, Commander of the Judea Region, and General Roni Numa, Commander of the Central Command, regarding the seizure of the land for one day. Also the aerial photograph taken on the location of the house at the Hursa-Dura junction. They say that commanders had been there and promised to leave and to take the situation into consideration.  This was two weeks ago and since then they have disappeared . The soldiers and the officer who are there are too junior to determine anything. But they make life very difficult. Almost every evening they go down to the road, block it and check cars for about two hours. T. tells me that they live there in peace and do not know what they want from them. He said that now conditions are being created which are causing unrest and if children and adults will be stopped  there will be incidents and they will be blamed.  And all this is because the road to Negohot is not far away and also the entrance to some of the vineyards of Lakhish which only the settlers will be able to open. They simply do not understand what is happening and why.

While we were speaking a man and woman soldier come down from the roof and cross the road to the pillbox and threw a remark at us saying that they do know when they will be leaving. The soldier tells the woman soldier not to talk to us. 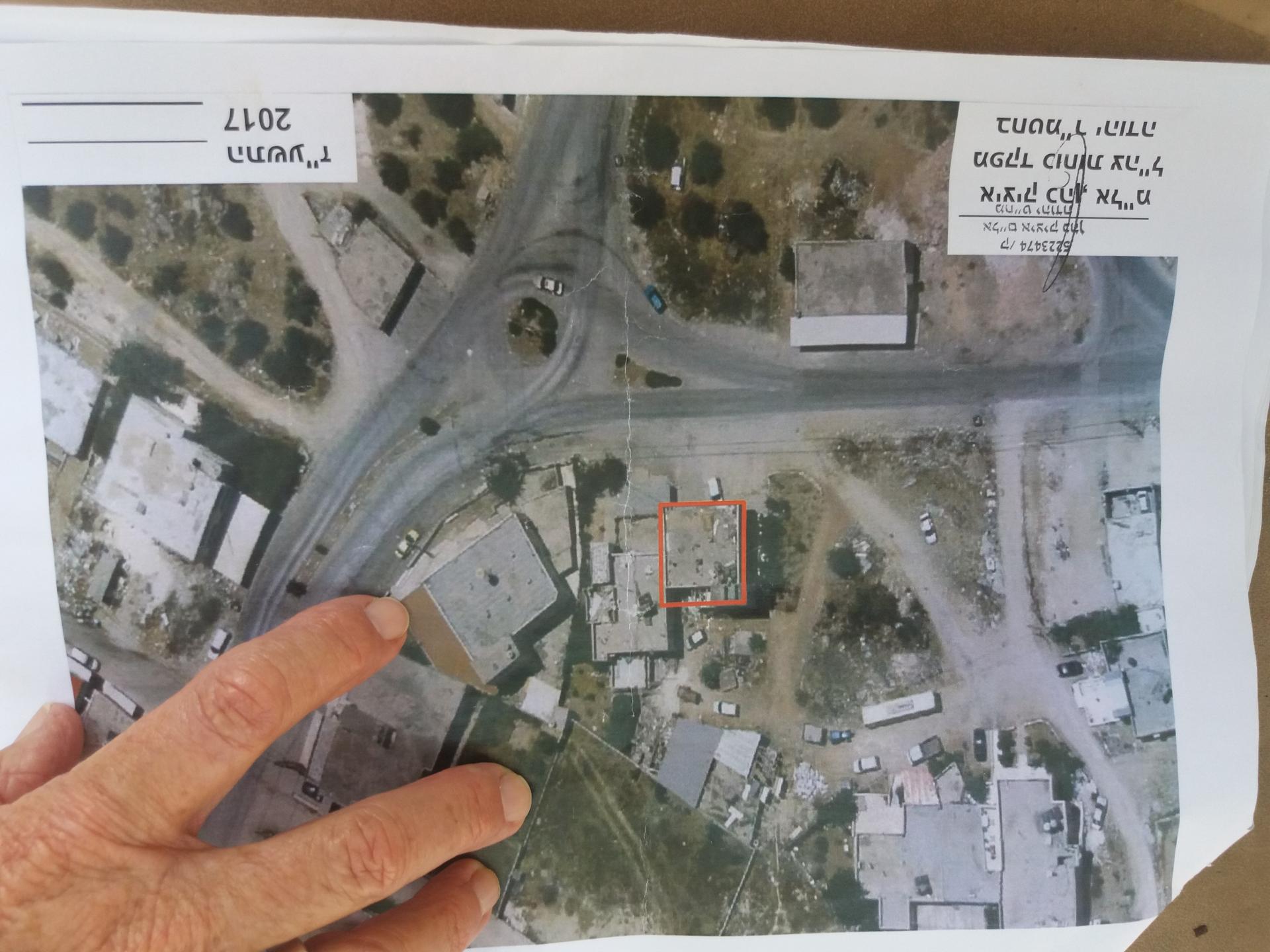 An aerial photo of the house and the crossroads of Hursa-Dura
Photo:
Ariela Slonim 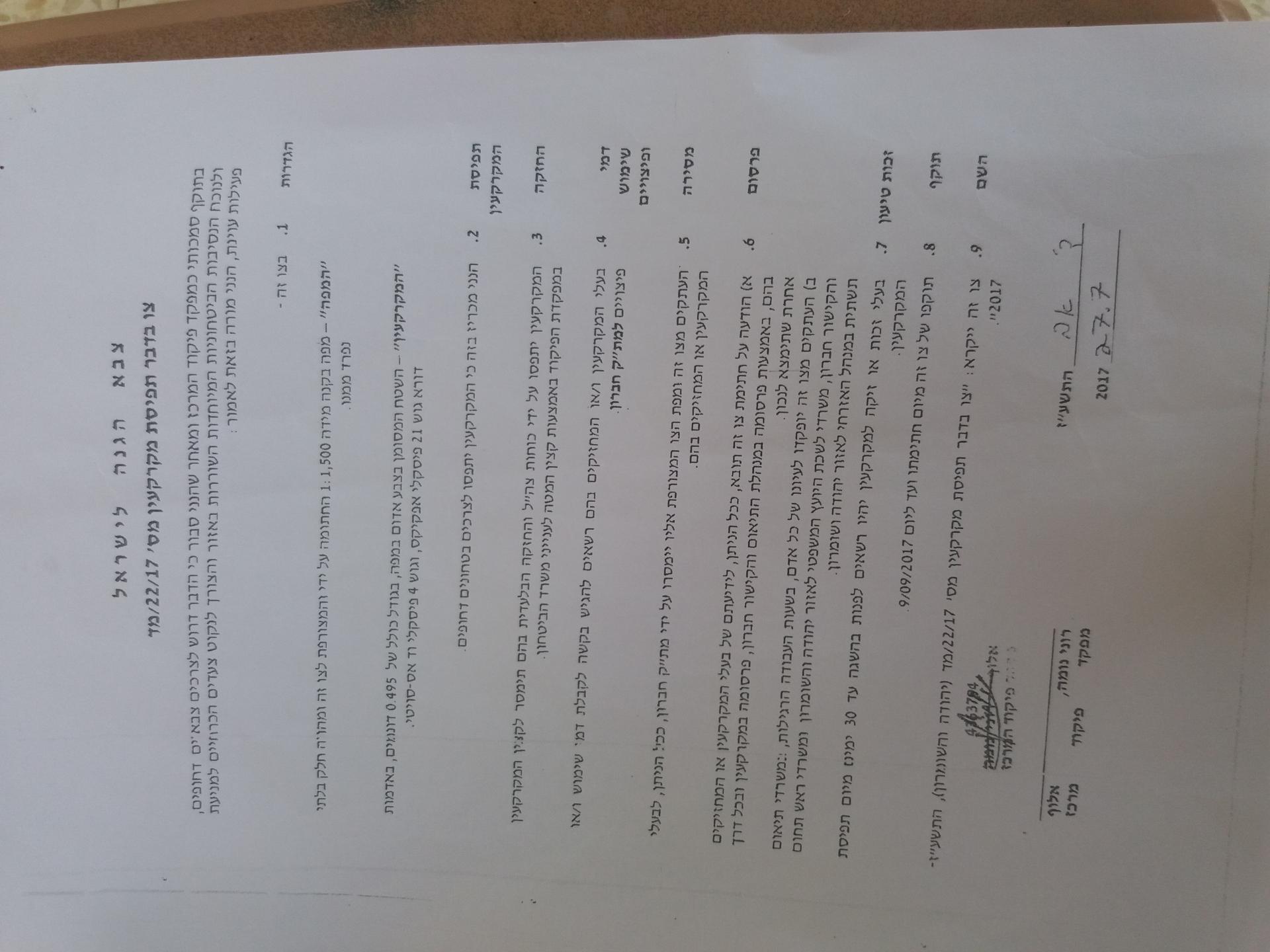 The requisition orders of the house signed by General Numa of the Central Command and the regional commander, who promised to evacuate it a day later.
Photo:
Ariela Slonim