We entered through Tarqumiyya checkpoint at 10 AM.  Everything went smoothly.  No laborers in the shed.  Many cars in the parking lot.

Nothing irregular on Highway 35.  The landscape is beautiful.

At the Shuyukh-Sa’ir junction the entrances to them and to Hebron have been blocked.  The “back to back” procedure is in place for everything, both people and goods.  The settlers outdid themselves, painting Israeli flags on all the concrete barriers (no one erased them). 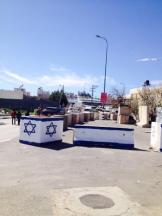 A large sign on the gate dividing Kiryat Arba from Hebron, “We demand territorial continuity of settlement from Giv’at Ha’avot to Kiryat Arba.”

Soldiers guard the white tent serving as the Hazon David synagogue.  It sits on land belonging to the Ja’abari family and had already been demolished by court order but the settlers rebuilt it and now there’s a booth with soldiers.

At Curve 160 the entire security apparatus is being renovated.  We wonder how many fences and fortifications will be added there, on the assumption that’s how to solve the problem of occupation.

We passed along the section of the Worshippers route near the Cave of the Patriarchs and were again sad to see all the windows and doors of the homes facing the route blocked and locked and welded shut, because worshippers pass there…

Tense quiet at the Cave of the Patriarchs.  The soldiers are jumpy and respond aggressively to everything, including our parking next to ‘Abed’s shop as usual.

They also stop women and search their bags.

We visited Z.A., an impressive woman whom we’ve visited before.  Now she and her family live between the two buildings bought by settlers [according to them].  Her home belongs to someone else.

She and her family still live in this hell, piles of garbage surround the entrance as well as the rubble of demolished walls, all the work of representatives of the chosen people.  The doors are chained, a booth with soldiers protecting the location from settlers who from time to time try to come to pray and riot.

She remembers us and welcomes us willingly.  We told her we had tried to meet with her a number of times but without success.  She’d often not been home in recent months because of the situation.

And then she recounts what they’d gone through on the days the settlers had invaded, broke things, demolished, and beat people.  Hell.  The army on the rooftops, tear gas grenades, soldiers and sick people injured so badly they required hospitalization, they were trapped in their home for two days and her husband wasn’t allowed to return home from work.

Her ten year old son who’s a pupil in Al-Ibrahamiyya next door is constantly harassed by the soldiers.  She’s glad the teachers have been on strike for two weeks.  Her 18 year old son was badly injured a month and a half ago by soldiers who beat him.  It’s not the first time, of course.  She was afraid they’d arrest or kill him because their trigger fingers are now itchy.  She ran to the Cave of the Patriarchs police station, asked them for help, they came but agreed to ask for his release only on condition that he go home.  Her 45 year old husband is very ill and collapsed when he saw what they were doing to his son.  Though the boy returned safely he needs psychological help.  He’s depressed.  He was in bed during our visit, in the afternoon.  She told us about such suffering and difficulties every day and about great despair and tremendous anxiety about the future of her children in this life.  And we again told her how ashamed we are and how it hurts us and how much we hope it ends already and promised to remain in contact and return to observe and report…

We exited to the street where the soldiers were shouting at a guy and making him stand with his back to us, his hands on a wall.

TIPH personnel watch and do nothing.  The soldiers from the booth next to the Cave of the Patriarchs run over roaring, “Don’t let them photograph,” talking aggressively and rudely to everyone.  A vehicle with an officer also shows up.  He says something to his soldiers and drives off.  To our relief the incident doesn’t deteriorate into something worse - too many eyes were watching - the soldiers release the detainee even though he answers them back and responds angrily to the way they treated him.

A settler couple and their infant pass.  “You,” he says to us, “are making trouble.  It’s all because of you…”

We didn’t drive to Tel Rumeida, which is still a closed military area.