Chronicle of a brutal occupation

From the checkpoint to Hebron along Highway 60 everything has been washed clean and bright, and it’s quiet.

As we came to the Kiryat Arba gas station we already saw much heavy equipment, many instruments of destruction parked there, hinting at upcoming demolitions somewhere.

But the story of 90-year-old Zahira Dodanis from Shuhadeh Street came first.

So we went to her and with the help of Mufid and Zidan Shaharabti we visited her in her alternative accomodations and heard what happened to her after we saw the door of her house welded shut.  Zohira’s skin is fair, her eyes clear and she appears younger than her age even though her eldest son is already 75.  They say the story began, essentially, on the day of the heavy snow, when there was a fire at a prefab belonging to settlers  which was located behind the row of houses and shops adjoining Beit Hadassah.  Zahira lives on the floor above the shops and when everyone came to see the fire they discovered the back walls of ten shops had been broken into, the shops plundered and the electricity for the prefab had been stolen from them.  The fire occurred because of a short circuit.  The IDF and the settlers denied that electricity had been stolen and said the fire was caused by Molotov cocktails thrown from the 90-year-old Zahira’s home (perhaps by her).  So, for security reasons, she must evacuate her home.  Without warning and without any opportunity to take any necessary belongings with her she was removed from the house and its doors welded.  Now she’s living in a house belonging to the family but there’s no refrigerator, washing machine or other belongings she needs.  And what will happen in the future?  No one knows.  Everything was photographed yesterday.

You can contact them and obtain the information, which I saw.  Incidentally, Ofer Ohana was very active.

Zidan, who in 2006 lost an eye from a beating by settlers and Mufid, whose back was broken by a beating by soldiers six years ago and metal plates were inserted as a result, said that they received no compensation, weren’t permitted to receive medical treatment in Israel and the lawsuit is still underway.  Mufid also says that his daughter had been run over by a settler a few years ago.  Luckily she recovered, but other than a weak apology nothing happened.  He said people came from Yesh Din but nothing’s happened since.  Moreover, last Thursday, says Mufid, he returned from Area H1 to his home which adjoins the stairs to the Cordova school, opposite Beit Hadassah.  The metal detector at the Tarpat checkpoint buzzed because of the metal plates in his back and the new soldier who doesn’t know him insisted on patting him down in a humiliating manner.  When he insisted on talking to an officer someone came, apologized, and asked whether he accepts the apology.  Mufid said all they ask is to be treated like human beings.  “We’re tired of being humiliated,” he said.  Maybe others should talk instead of us.  They take out packages of tranquilizers.  Everyone here takes them, they say.  So we’re reporting it.

Perhaps what they have to say will be heard by someone who could also do something.

We walked to the Tarpat checkpoint.  The milk seller and his donkey argue for a long time to be allowed through the gate to H1 to sell his goods.  The soldier insists that he can go through, but not the donkey. 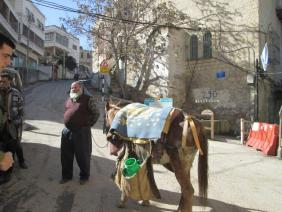 Who’s the donkey here, I ask, and the soldier explains that once he allowed him to go through and was reprimanded because the donkey damages the gate.  With surprising patience the soldier politely explains that he has to be there even though he doesn’t want to be, in order to guard against terrorists.  “Do you know how many Molotov cocktails are thrown here, and the checkpoint was already burned down…”  I tell him about Mufid and he admits he was the soldier who patted him down and did apologize and spoke politely and they’re all liars.  And Zahira’s home is actually empty and the commander told him the fire was caused by a Molotov cocktail.  In brief, the soldier presents the version justifying the army’s behavior and I give up and simply ask him to remember there are 60,000 people whose homes are here and they pay a heavy price because of 600 Jews who claim rights  for themselves while denying others their own rights and security…

We decided to return via Highway 317 and then saw the morning’s instruments of destruction in action.

Just past Zif junction, before Dir’at, is a small village right below the emplacement overlooking the road to Yatta.  Its name is Rifawiyya.  A crowd of many villagers, soldiers and heavy equipment causes us to stop.  Two houses have in fact already been demolished; we see the third being destroyed.  Piles of household goods dumped on the ground.  And the destroyers now wait for them to remove the water tank and satellite dish from the roof.  Nice of them, right?

Everyone’s photographing everyone else, all for their own reasons.

Everywhere the confrontation between soldiers and residents is on the verge of exploding but the many foreign press photographers cause the soldiers to restrain themselves.  I also took photographs and put them on Facebook.  I’ll try to send them to Machsom Watch.

M. says, after watching for a long time, “That’s enough.  Let’s get out of here.  I can’t bear to see any more.”  So we drove away and on the road, near the way to a-Tawwani, saw another squad of soldiers, perhaps guarding the outer perimeter of the destruction.

“And I said to myself, what a wonderful world…”