‘Ata Jabar’s attempts to live next to Kiryat Arba.

The Meitar checkpoint operates without any particular problems.

Highway 317 is almost empty of traffic.  Traffic is heavier on Highway 60.  We see people harvesting olives along the roadside.

H., our acquaintance, the owner of a grove below A-Tuwani, decided not to harvest this year.  There’s not enough fruit on the remaining trees that weren’t cut down by the settlers.  We arranged to come help when he works in his grove.

Hebron is full of paratroopers and Border Police soldiers, as usual.  But we saw no detainees

while we were there, nor any special problems.  A new sign on Beit Hadassah with a verse from Jeremiah (32:41):   “Yea, I will rejoice over them to do them good, and I will plant them in this land in truth with My whole heart and with My whole soul.” 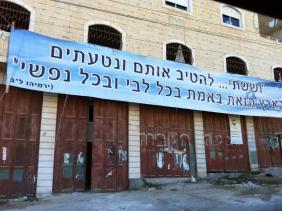 Little children hang around with soldiers at the guard post next to Beit Hadassah.  The symbiosis already extends to schoolchildren and kindergartners.  This holy city, like Jerusalem, is full of human rights violations by people who give belief in god a bad name.

We visited ‘Ata who lives right below the Nofei Mamreh neighborhood.  After the land on which Kiryat Arba was erected neighborhood by neighborhood was expropriated from him and his family, the authorities continue to try and make life impossible for him.  After he’d made arrangements with the Civil Administration and with Mekorot, the tomatoes and beans again sprouted among his grape vines.  But the largest hamula in the area wasn’t able to reach a similar agreement so the authorities decided to impose collective punishment and shut off his water also.  His request to separate the water supply and the metering was unsuccessful.  He’s always paid for the water and will continue to do so.

So everything wilted – there are no tomatoes, no cabbage, no beans and the vines are also thirsty.  A large family which makes its living from the land is “stuck” in view of the settlers.

Their only sin is their land, coveted to expand Kiryat Arba.

So their lives are made unbearable in the hope they’ll give up and leave.

The matter is now in court.  It’s lucky there are a few good people trying to help.