Nobody is waiting at the Meitar checkpoint.  All the laborers are already on the Israeli side.  We again note that those manning this checkpoint behave appropriately.

A military vehicle stands at the entrance to Dahariyya.  Soldiers are inside; they don’t get out, but they’re there, right next to the sign notifying that you’re entering Area A, making their presence known.  We photograph them; one responds with a rude gesture.

The road is full of cars and pupils at this hour of the morning.

Reservists at the Dura-Elfawwar junction; they’ve come down from the pillbox, stand around. “Area A” newly inscribed in sloppy handwriting on the concrete barrier, one soldier standing on guard next to it, two others stopping cars coming from Elfawwar on their way to Dura and then on to their territory, Area A, to Hebron. That’s their daily routine – why interfere with it?  Why come in to upset daily life?  How else could the reservists feel they’re doing something important?  How else could they tell themselves and their families that this waste of time and money has some meaning, some justification?  So they stand on the road in the morning, conducting searches.  “When will you dismantle the checkpoint?” we ask.  “At eight,” they reply.  More proof that it’s only to give them something to do:  If there had been a real reason for the checkpoint, they wouldn’t have already known when it would come down.  Wouldn’t they remain until the problem had been solved?  But there’s a schedule:  From 7 to 8:  a flying checkpoint.  Breakfast is at 8, so they have to leave.  Meanwhile:  we’re in charge here.

The same occurs at the Pharmacy checkpoint, though the soldiers there are from the Lavie battalion. They’re stopping cars at the outskirts of the southern entrance to Hebron. Only Palestinians are allowed to use this road.

“Don’t talk to them,” one soldier says to the others.  We hear them explain about Ella, a friend of theirs who appeared on the “Big Brother” program [on Israeli TV].

Two guards stand at the concrete barrier at the entrance to Kiryat Arba, next to the hitchhiking station.

“Mitzpeh Avichai” keeps expanding on the hill to our right.  Solar heaters, cars, etc.  It doesn’t seem that anyone thinks it’s illegal.

In the city, many children on their way to school. Paratroopers guard the Worshippers’ route. Paratroopers are also at Curve 160 today, rather than Border Police. Border Police man the other checkpoints to the Cave of the Patriarchs.  We drove to the Tarpa”t checkpoint, hoping they’re allowing teachers from the Cordova school to go through the gate. No, it’s locked. The locals tell us that a few days ago a girl was found with a knife that she’d carried intentionally. She was happy to be arrested. It’s what she desired, because she didn’t want her father to force her to marry someone she didn’t want.

We’re told about another guy who was arrested for touching a soldier when he asked him not to be rude to a girl he was searching. “But,” he added, “there are also good soldiers, who are kind and embarrassed.”  Hagit “dares” to rip down a sign reading “Kahana was right.” A young soldier starts yelling at her: “Rip down your own signs. The settlers have a right to put up whatever they want!  You’re not allowed to remove it.” He seems very jumpy. His commander calms him down, asks Hagit to move back a little. From the side it appears he is strongly motivated to detain Palestinians. His companions say they’re acquainted with the detainees

and he lets them go. It’s still quiet at the Cave of the Patriarchs.

Everything’s as usual at Beit HaMeriva.  Soldiers on site, but someone made a path between the concrete barriers so residents of the neighborhood could take a route which should never have been blocked.

We left the city with a sigh of relief, as always. Nothing special happened today.

We drove home via Highway 317 to see whether there’s anything new on “Antenna Hill,” not far from Zif junction.

In fact, this is “Mitzpor Ziv,” established in memory of two employees of the Israel Electric Company who were killed there in 2003.

Now an Israeli flag flies there. Locals tell us that people have begun to come pray there. One day they placed a trailer or something like it, but it was demolished. There are signs of some kind of construction.  We should keep track of what’s happening. 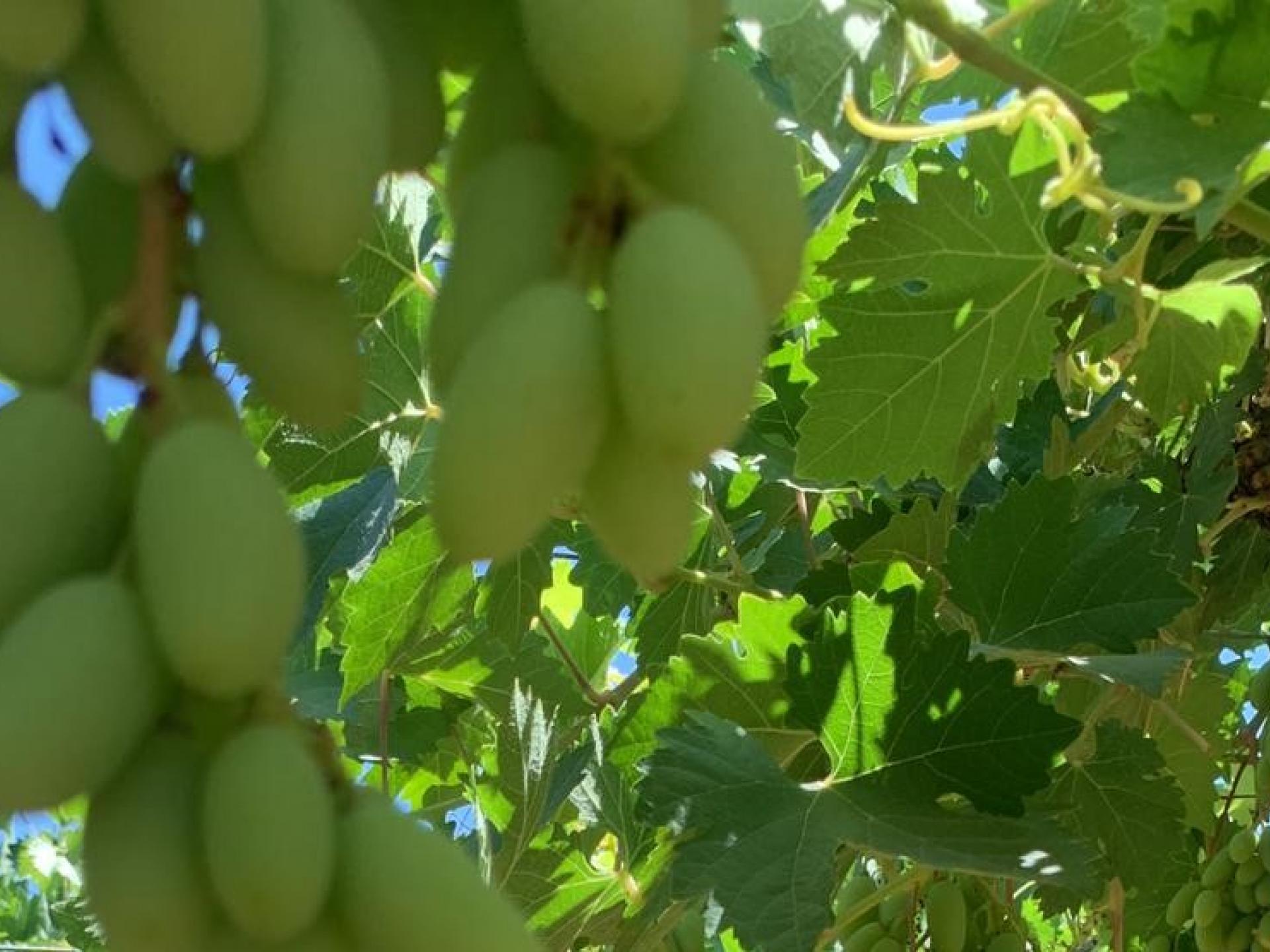 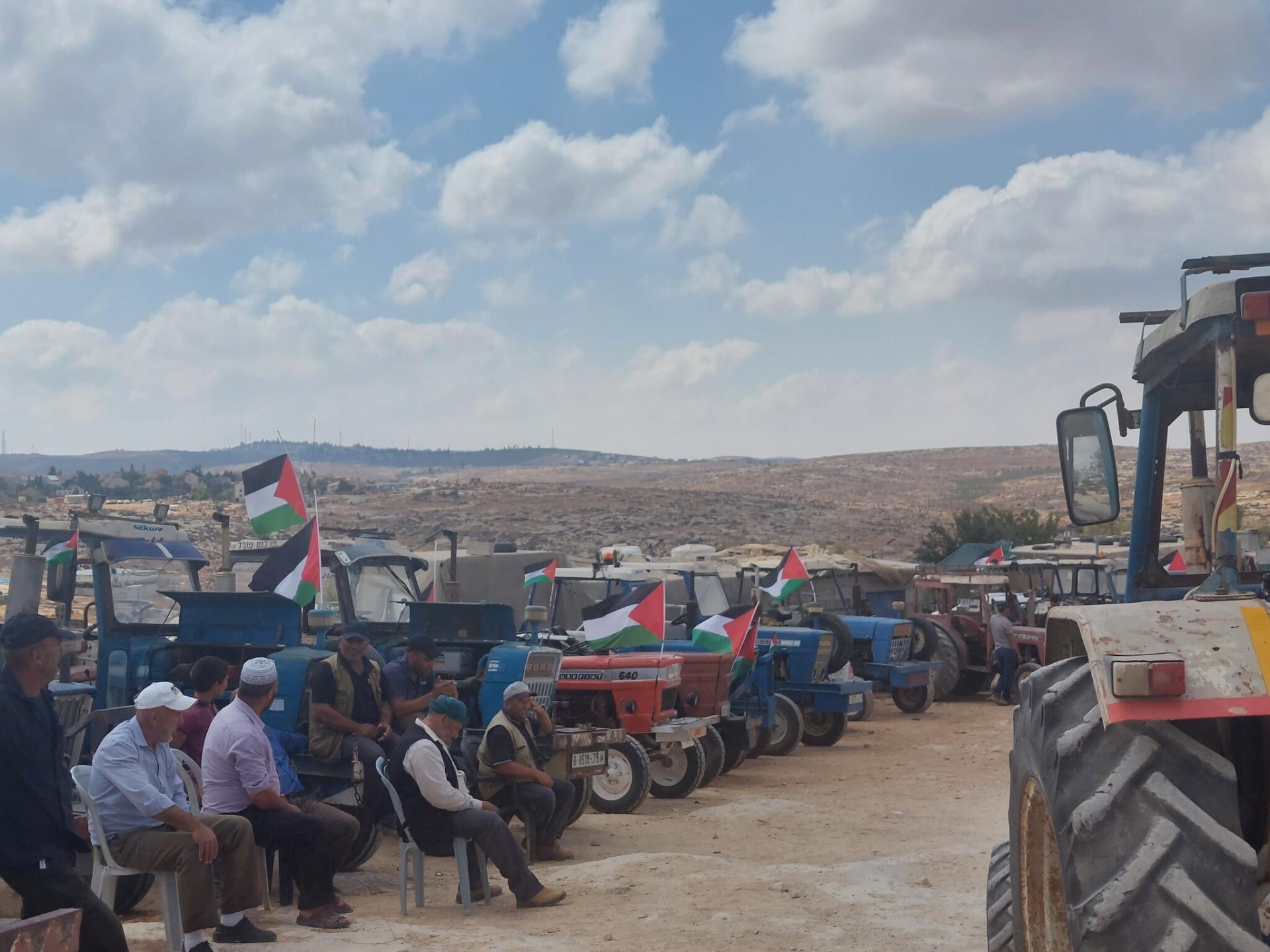 Susiya - a meeting of tractors and their drivers