While the checkpoint on Highway 446, as you approach Deir Balut, is open, an eviction order threatens 12 dunums in the heart of the nearby neighborhood.  Threatening and real:  electric poles have been felled and olive trees uprooted.

We first entered the neighborhood a few days ago (25.1.17) to determine who owned the land of the Deir Kle’a antiquities site located in Nahal Shiloh-Eli and Deir Sam’an nature preserves, imprisoned within the Leshem settlement, and whether the owner had been asked about the archaeological dig, or agreed to it, as the law requires!

But, at the last minute, past and future exchanged places, here and there:  Eviction order no. 392601, dated 20.1.16, declares/accuses the Deir Balut neighborhood of an “incursion”:

“An incursion into State Lands of Alei Zahav”

An incursion into “State Lands”?  Or to lands of the Alei Zahav settlement?  Which is, in fact, Leshem, and, even more accurately, the neighborhood that is under construction now, called New Leshem.  New Leshem differs from Alei Zahav not only by being more religious but by being a separate municipality.  All subsumed under the dubious term, State Lands.

We met eight men from the neighborhood, including Mohammad, who came especially,from Hebron.  They provided us with copies of documents (they’ll bring the Turkish land registration document tomorrow) and with their phone numbers (the landowner hesitated until the last minute, and as a gesture of trust dictated it to me), and the expert’s calling card.  The conversation proceeded in a mix of three languages: Arabic, Hebrew and English.

On 20.12.16 a “warning” notice was posted on the fence, with a handwritten Hebrew description of the eviction order:  “Approximately 12 dunums including an access route, a concrete wall, a wire fence, a water tank, electric poles, some 200 young olive, almond and fig trees.”

Then te eviction began:  a hail of rocks and boulders that knocked down the electric poles.  The violent, scornful behavior of the bulldozer operator:  “Go to court,” he told the owners of the olive trees as he uprooted them.  The house adjoining the area hasn’t had any electricity for an entire month.  Assurances, and contacting the electric company, didn’t help.  The owner was a young man with seven children who sounded on the verge of a breakdown.

The documents included a decision by the Judea and Samaria Appeals Committee regarding an appeal from 2014 submitted by A., the landowner (who also owns the land of the Deir Kle’a antiquities site).  Reading the document, which on its face seems to be an achievement dearly obtained (an expensive attorney), in fact indicates an intention to expropriate and annex at all costs.  If not today, then tomorrow.

Four paragraphs in the decision by “the Honorable Judge Major Meir Wisgar”:

Par. 1.  “Yesterday the respondent notified that the eviction order, the subject of the appeal, has been cancelled.”

Par.2.  “The respondent explained that the area that is the subject of the appeal was included in land that had in the past been subject to a declaration, but ‘after a process of coordination of declarations of state lands by the Blue Line committee it was decided to remove the area that received the eviction notice from state lands.’”

Great.  The Blue Line team removed this area from “state lands.”  That is, recognized Palestinian ownership.

And then comes Par. 3, announcing that we’re not done yet:

Par. 3.  “…Removal of the area from among declared state lands should not be considered to confirm the appellant’s claim that the land belongs to him or to anyone else, and that his status vis-à-vis the land, including its being again declared state land, may change in accordance with the factual situation and relevant legal provisions.”

How many months of effort, and how much money, did he devote to the appeal?  Especially since the same eviction order will appear anew two years later.

The area lies among the houses.  In 2015 private construction adjacent to the area was stopped, including the walls of the mosque which we photographed for our previous report (25.1.17).

Par. 2 of the 2014 decision may offer some hope to cancel the order via an appeal to the Supreme Court.  A Palestinian attorney represents the landowner (but note, in this connection:  Talia Sasson’s article in Ha’aretz from 31.1.17, and Avigdor Feldman’s from 2.2.17.  But still…)

I gave all the documents and relevant phone numbers to Alon Cohen Lifshitz, from BaMakom, which has access to the relevant maps and the professional ability to assist the landowner if he wishes (Chana Zohar put me in touch with them).

We briefly visited Deir Ghassaneh and immediately heard about the army’s nighttime incursions, destruction of furniture, and arrests.  The youth who told Mohammad, our driver from Kafr Qassem, about them refused to believe there was such a thing as Jewish women opposed to the occupation.  It was obvious that the little checkpoint symbol couldn’t replace a vest (like the one photographers and members of international organizations wear) with a large, noticeable text – something like “Machsom Watch against the occupation,” in Arabic.  We could also use a personal calling card with an image of a checkpoint and a statement “Against the occupation.”

Our volunteer guide to the ancient area of the village that had been restored by Riwaq refused to give us his phone number.  I’m sure he wouldn’t have refused to take ours.  A calling card can be presented later to him to examine and use if necessary.

The only person whose phone number we obtained had been jailed for a month and his health had suffered as a result.  He’d like to obtain medication from Israel (I put him in touch with our friend from Hars, who knows the schedule of PHR visits in the occupied territories). 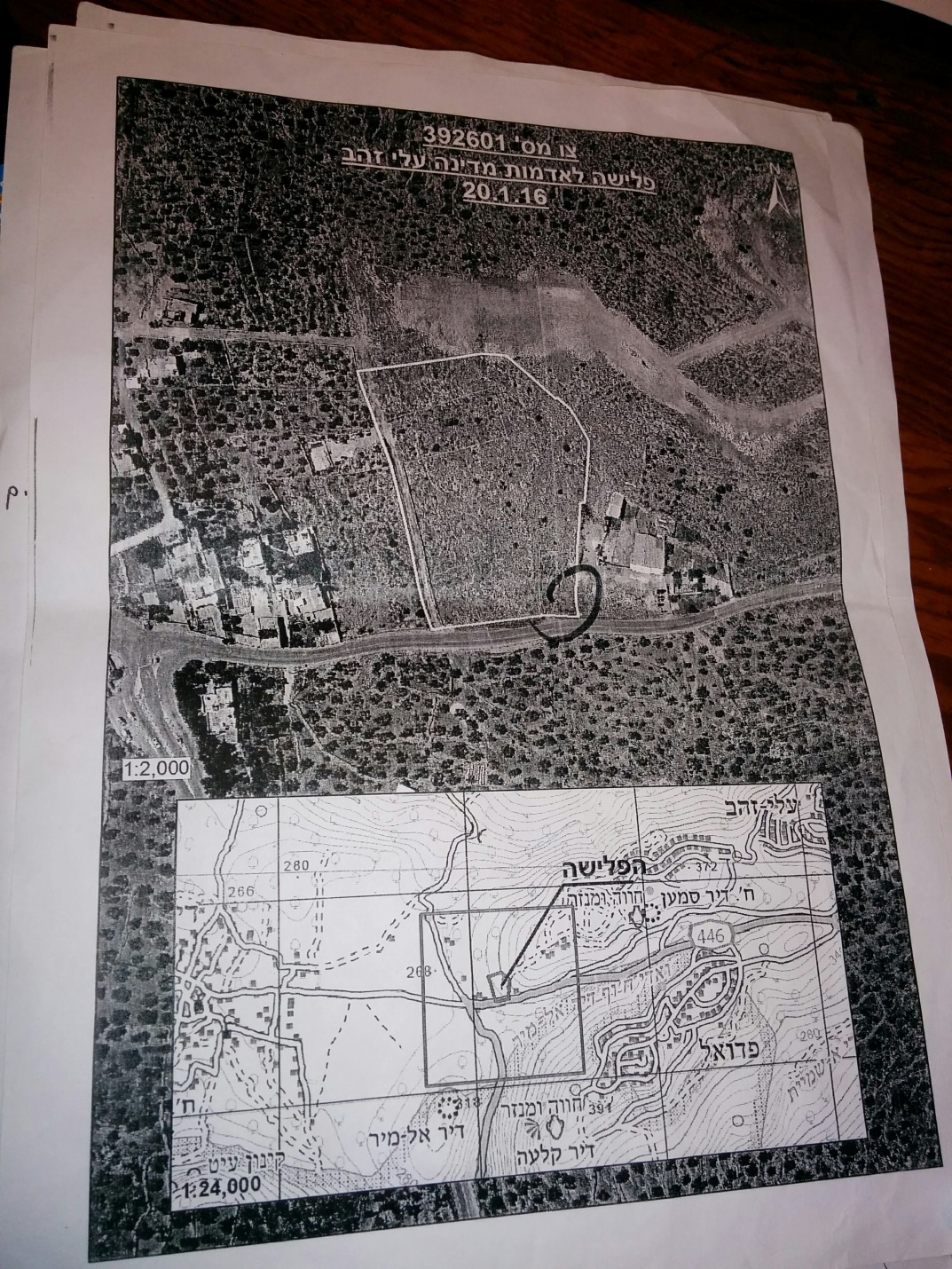 This is what the Deir Balut neighborhood, described in this report ,looks like (center right).  The photo was taken from the mouth of the cave at the Deir Kle’a antiquities site on the opposite hill.  A site on land owned by A. – though we can assume the state believes it’s part of the “state lands.”

We haven’t yet investigated the matter carefully. 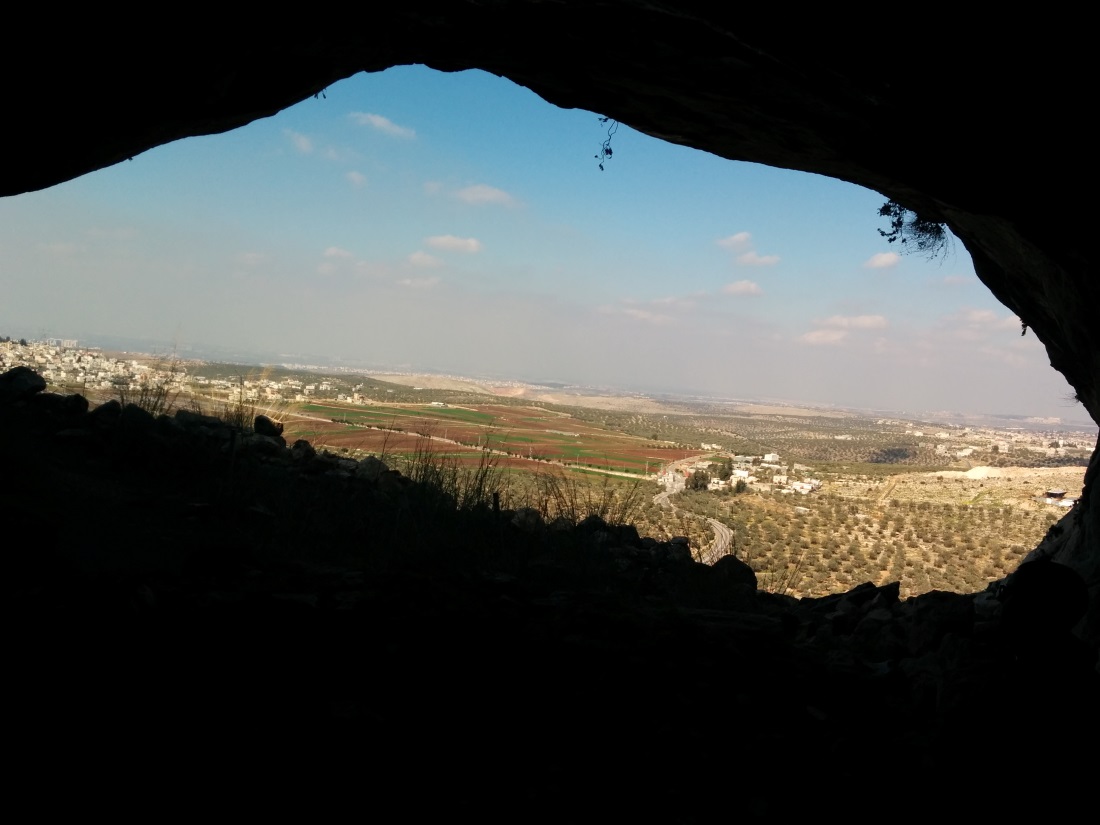