The Hebron Agreements were signed in 1997 (long ago).  They specified the arrangements that would apply to Palestinian civilians remaining in Area H2, under Israeli security control.  Civilian Palestinian construction would require approval by the Hebron municipality.  If the municipality approves, the Civil Administration is forbidden to intervene.  The IDF, as an occupation army, has veto power over these building permits.  The veto must be imposed only by the most senior commander – the GOC Central Command.  He must issue a formal order – but need not exhibit it.  The Palestinians are not required to fill it out.

Gideon Levy published the following account in Ha’aretz on September 9, 2016:

Soldiers from Naha”l regiment 50 have been for the past week guarding a Palestinian building in Hebron all day and all night lest its owner go up on the roof and continue his construction.  The soldiers say they have an order from the GOC but they’re not allowed to show it.

That’s how IDF soldiers, from a combat unit, moral and indomitable, young men serving in an elite unit, stand on the street all day and all night, guarding 'Aref Jaber’s home.  Their mission includes preventing strangers from entering this apartment building and a total prohibition against going up to the roof.  The residents of the building, including the children, are also not allowed on the roof.  Why?  All the soldiers know is that Jaber is prohibited from continuing to build his house.  They have no idea why and say they have an order from the GOC in their pocket which classifies the building as a closed military area, but they’re not allowed to show it to anyone.  The secret order.

“On Monday of this week two pleasant soldiers on the morning shift stood on the street,  covered with smiles and extremely good-natured.  Ex-kibbutzniks, one from Yehiam and the commander, a sergeant, from Ma’aleh HaHamisha.  The sun beat down on their heads covered with cloth khaki hats, armed from top to toe, heavy walkie-talkies on their backs, ready to carry out the daring mission in the best possible manner:  from time to time they offered a piece of candy or a chip to one of the neighborhood children. 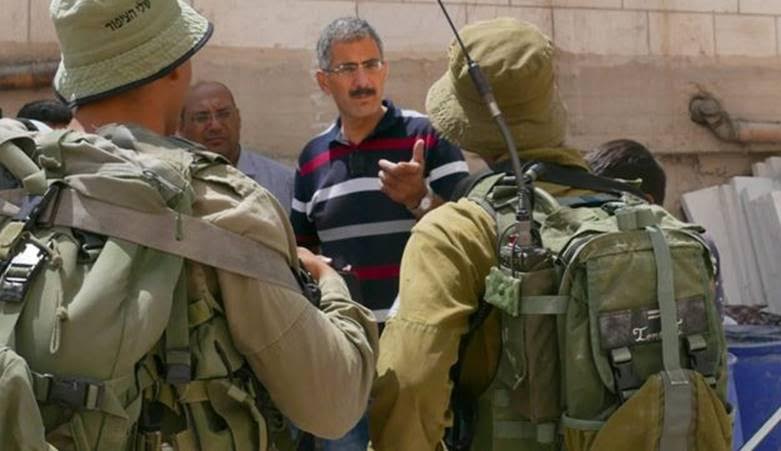 'Aref Jaber in the courtyard of his home, this week.  The IDF spokesman stated ‘The owner and his family are allowed to enter the house freely.’

“Suddenly the soldiers tensed:  the 12-year old son of the homeowner was observed going up to the roof.  The two soldiers crossed the street and with extraordinary politeness ordered him to bring the boy down.  If not, they warned, they’ll call for reinforcements and the boy will be arrested.  That’s what they said.  The father gave the order and the boy descended from the roof.

“A short time later a security threat arose that was no less serious:  A Palestinian Huriyya network TV crew attempted to pass over the threshold and sneak into the courtyard to interview the homeowner.  The force stiffened.  Again the two soldiers crossed the street and politely warned the homeowner and the TV crew.  When the journalist asked to see the order, they told him they had it in their pocket but they’re not allowed to show it.  It’s confidential.  This entire surreal incident occurred because of a settler from Tel Rumeida who contacted the Civil Administration which prevented the construction from proceeding.  Chad Gadya.”

This morning the story was repeated.

'Aref wanted to bring into the house the building materials lying outside lest they get wet if it rains unexpectedly.  He brought laborers and paid them.  The soldiers, who saw the building materials being brought into the house, stopped the work.  'Aref telephoned his attorney and us…  We realized that our presence only increased the likelihood of a compromise .  We called over the TIPH personnel who were nearby.  As we came back 'Aref had not been arrested and the soldiers had left.  The building materials remained inside.  The soldiers were pleasant and delightful and understood they need to have an order in their hands in order to implement the policy.  The Civil Administration’s situation room told me over the phone that they’re aware of the matter and they’re not getting involved. 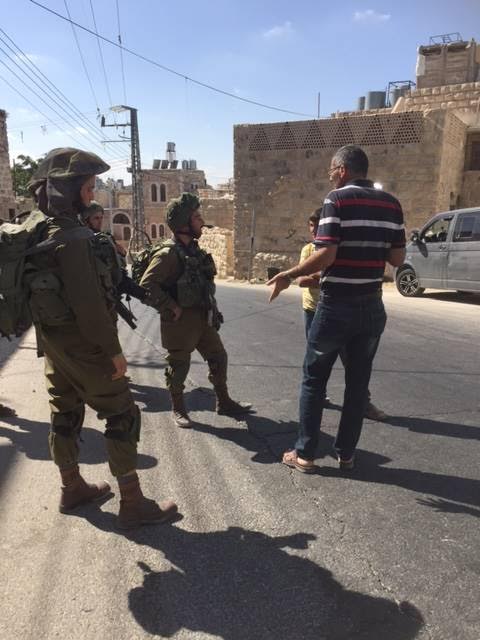 Last week the son of this nice man you’ll see in the video told M., our driver, what Michal had reported.  Today he told it to the camera

Parents of youngsters in Hebron are extremely, constantly fearful of what could happen to their children, and that contributes neither to reducing tension or to encouraging coexistence.

All the soldiers we saw, including more than usual along the worshippers route, held their weapons at a 90 degree angle.  As though they’d received orders to be ready.

The official entrance to Bani Na’im is open and the settlers are working in the vineyard without a military escort.

But the southeastern entrance is closed and The Nation Of Israel Lives! 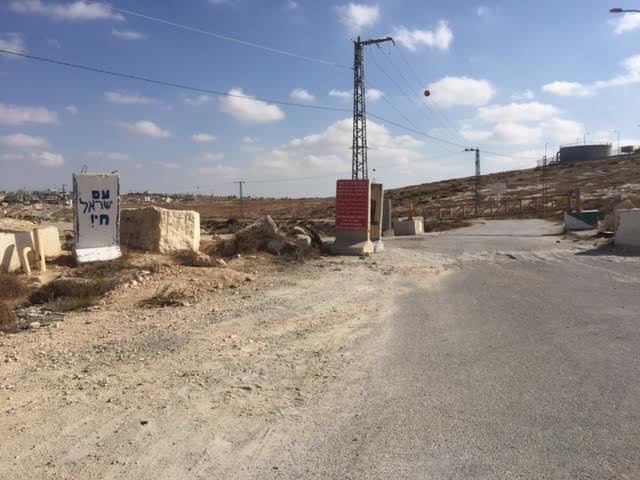 At the illegal Asahael outpost (the location of Haya Yokhenet from “Eretz Nehederet”) they’ve begun construction of permanent buildings (the entire settlement is illegal).  One entrance to the village of Abda (from Highway 60) has been blocked again, as well as the only entrance (on Highway 60) to the village of Deir Razakh.