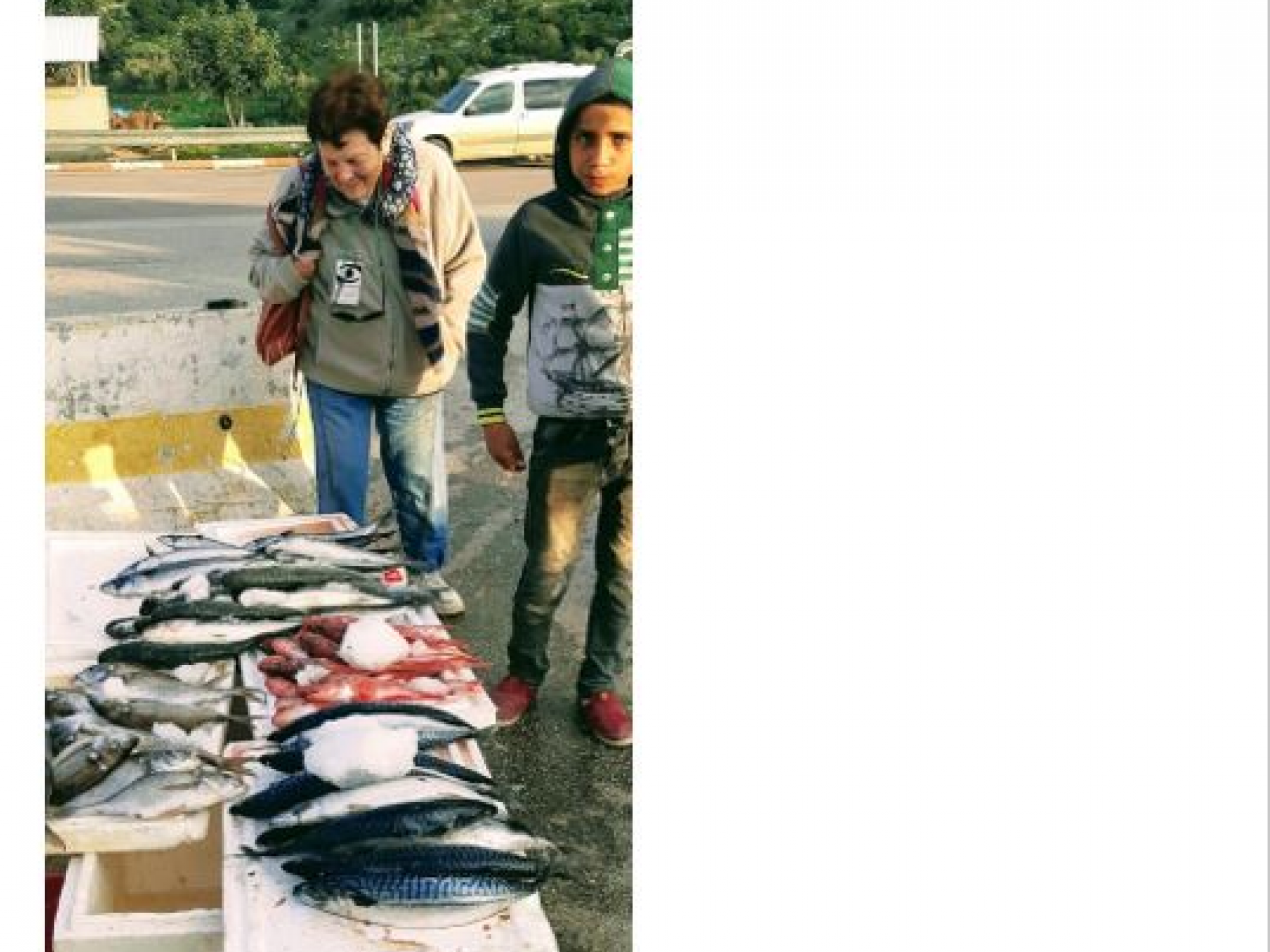 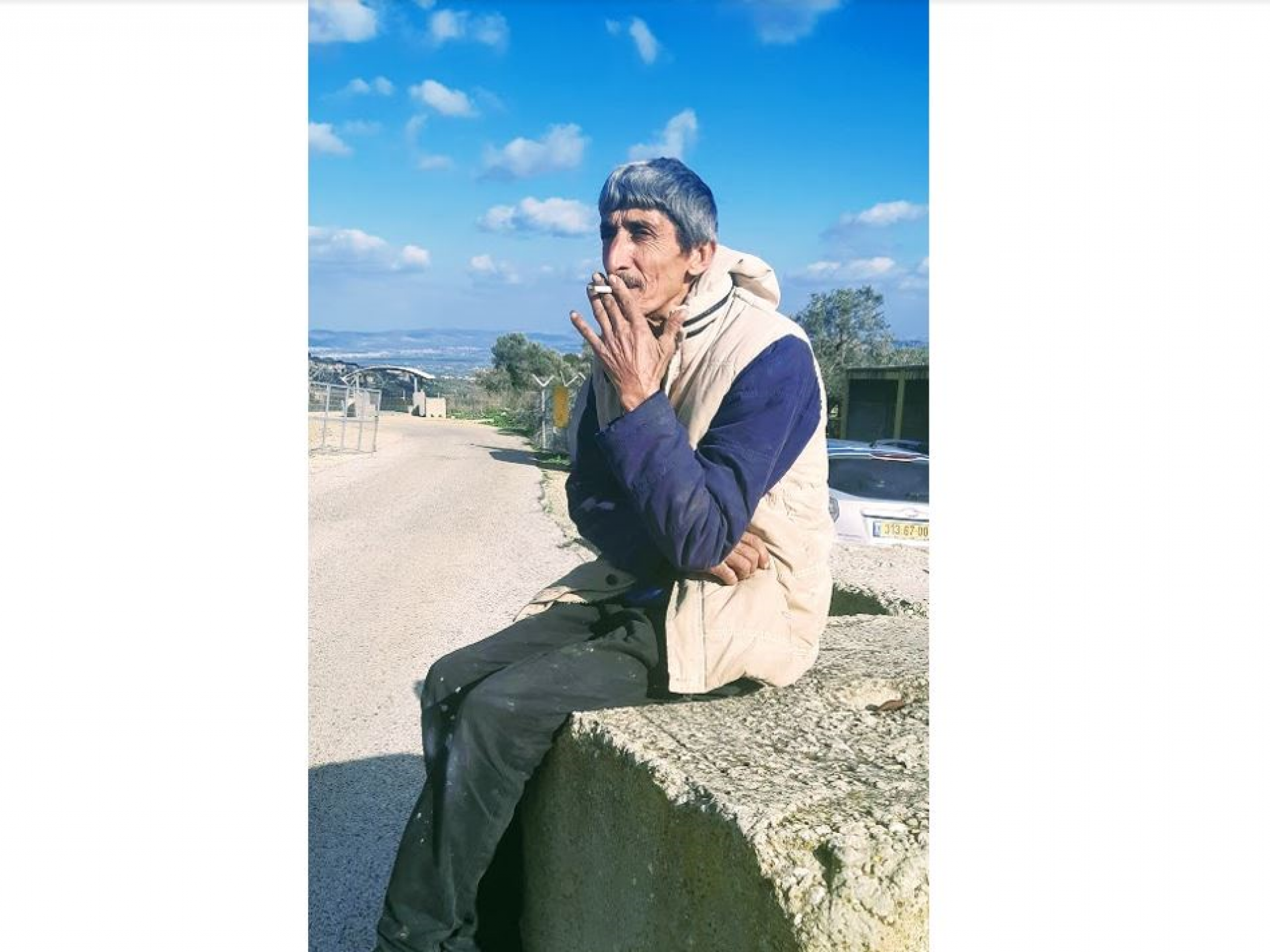 Anin Checkpoint: Before the separation fence we went to Israel every day and life was honey

Anin Agricultural checkpoint 15:10
Five people wait for the soldiers to open the checkpoint so they can go home after their workday or various errands. 62-year old P. (photo left) does not need a transit or work permit in Israel. Twice a week he may cross here, and on other days at any other checkpoint thanks to his age and ID alone. He is a plumber and has not found work for three days now, returning home empty-handed. No money for food he says, my 21 grandchildren come on Friday, search my pockets and I have nothing to give them. As in every conversation we have with him, he reminisces about the bet time in his life. Until 1967 villagers raised cattle, sheep and goats, grew vegetables and fruit for their own use, money was not abundant but food was aplenty. There was a Jordanian army post in the village with 4 officers and as a child he used to sell them cold water and coffee. Then came the 1967 war, the Israeli army entered the village on many jeeps, the Jordanian soldiers ran away and the village was occupied. Then the land of endless opportunity opened up – everyone got rid of their livestock and went out to look for riches in Israel. I had Jewish friends, he says, who were like my own brothers. The Intifada and the Separation Fence broke the dream and everyone came home. All his sons are married professionals, livelihood is difficult for them all, and “that’s the way it is”, he concludes, chain-smoking.

The Israeli soldiers arrive to open the middle gate. But wait a minute, they forgot to bring a key. Well, the most…. army in the world. 20 minutes later the key arrives and everyone gets through.

Tayibe-Roumana Agricultural checkpoint 15:30
The soldiers arrived one minute before we did. They on the security road, and we through the town of Umm Al Fahm. Five men wait to get back home. They complain that their transit permits are not being re-issued. “The Palestinian DCO, like the Israeli DCO, does nothing for us”. The soldiers get ready to open the checkpoint. Our friend, Abu Ali, over 60-years old, informs us joyfully that 20 days ago he married a new wife, a second one. Congratulations, man! his friends applaud.

Barta’a Checkpoint 16:00
(In the photo, Roni is impressed with the size of the fish)

Much workday action. Construction workers get back from their workday in Harish city, holding small blue lunchboxes, bypass the terminal quickly and come out in the Palestinian car-park. Apparently most of them have private cars and the taxi drivers remain without work. People say they’ve heard this checkpoint is about to be shut down! They complain that in the morning only one belt is functional and everything moves slowly, with lots of nerves. The two little coffee vendors run to us, pouring us cold bitter black coffee. We make a big mistake and give both of them much more than one shekel, the official price. In no time another four little ones stick to us and do not give up. A hard, sad experience. One can also find here fresh fish from Jaffa, fresh tomatoes straight from the field, strawberries and more.