At the Eyal CP we meet Palestinians who cannot find work in Israel and hear about how they are robbed by the work contractors.

The sparsity of people passing at the 935 CP as compared to the Jiyyus North CP which is opened only at the olive picking season, shows what difficulties are heaped on the inhabitants of Jiyyus who are forced to pass, during the rest of the year, at Jiyyus West 935.

At 04:30 I collected a guest from the hotel and then Anneline, on road No. 5 under the bridge, and we arrived at the Eyal CP before 05:30. All the unorganized parking possibilities were packed full with private vehicles waiting for workers. The square was packed full with people and we cleared our way with difficulty among the crowd. We arrived at a small group of not very young people, hoping to find work.  Every fortnight they get an authorization for four days to pass over to Israel for this purpose. Their chance to work is when one of the regular workers of a contractor is asked to bring another worker. They complained about the work contractors to whom one has to pay 2600 IS (every month?) if they arrange a working place: “they don’t do anything and earn each month tens of thousands…”.

It is still dark, beyond the gate one can see a continuing stream of Palestinian workers who hurry to the vehicles which collect them. There are some who tarry for prayer.

We tried to approach the entrance zone to the checkpoint near the separation fence and the observation tower, and found out that the passage was tightly closed and the whole area looked like a neglected backyard. Through all the fences one could see a quite quick progress of the queues along the fence in the direction of the turnstiles. After 40 minutes almost all the parking area was cleared of people, and the transportation vehicles collected the outgoing workers.

We passed by the Tzufin and Azun checkpoints and arrived at the Falamiya North (914) CP, just as it was being closed. We continued to Falamiya South\Jiyus West (935) CP before the soldiers opened it, although they were already there, at 07:00 exactly. A relatively elderly couple in a private car, a tractor and about 10 men (some of whom mounted the tractor after it passed), were waiting to enter the seamline zone.  The owner of the tractor complained that this time he received the authorization only after a long wait and that his son, who used always to receive an authorization for a year, didn’t receive it.  He has a large piece of land beyond the fence, and a pump which his son is supposed to activate. After a few actions of back and forth and after they offered him an authorization for the son if he himself would give up his own, his stubbornness had the upper hand to a certain extend and the son got an authorization for 4 months.

We continued to the Jiyyus North (965) CP, the passage which is near the village and the plots of the farmers, and which is closed most of the year.  All along the road descending to it there were many vehicles, tractors, trucks, carts and we understood why there were so few at 935. When this CP is opened they are not obliged to drive by winding roads a few kilometers northwards, and within the seam zone again southwards to their plots. 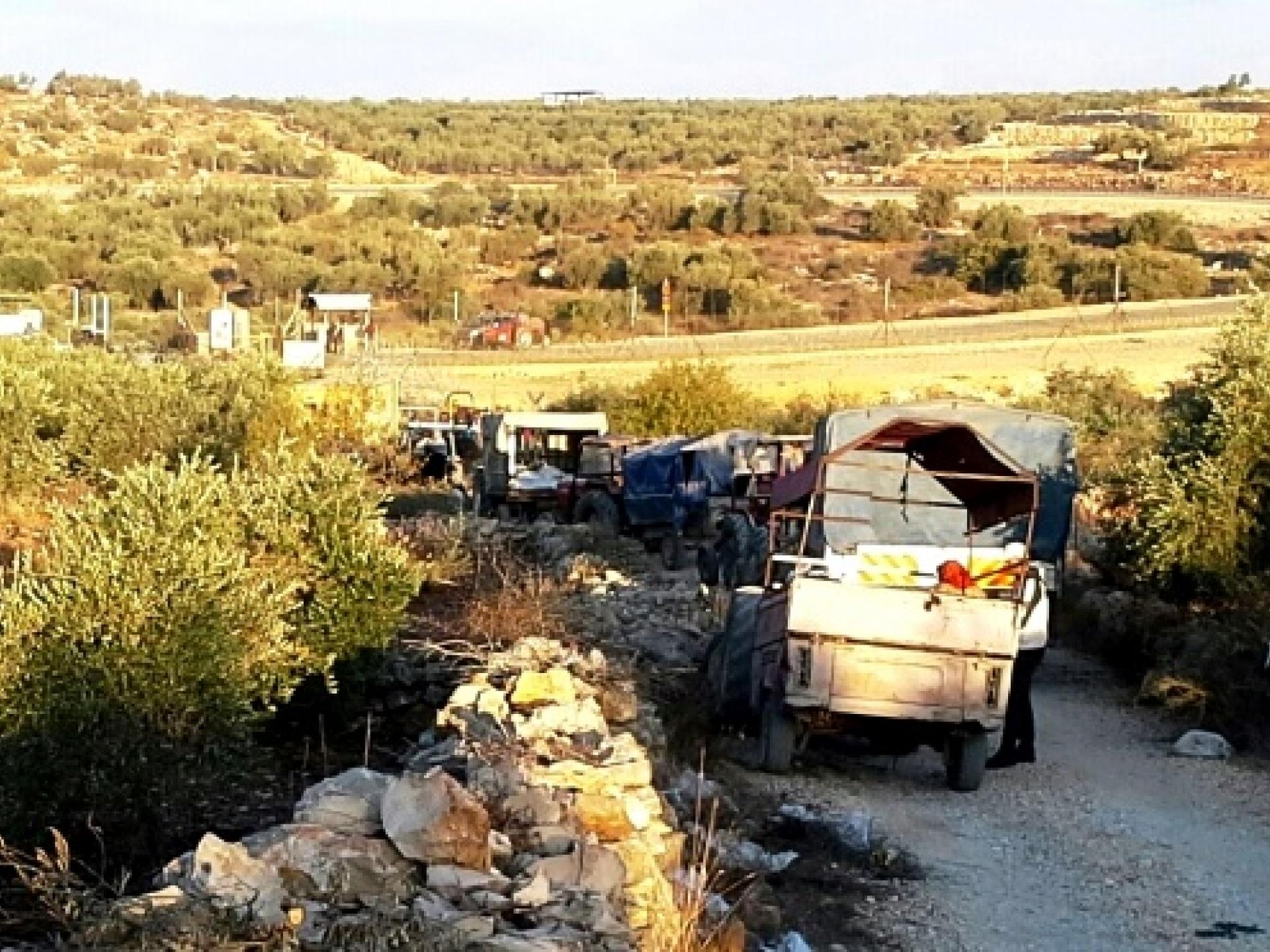 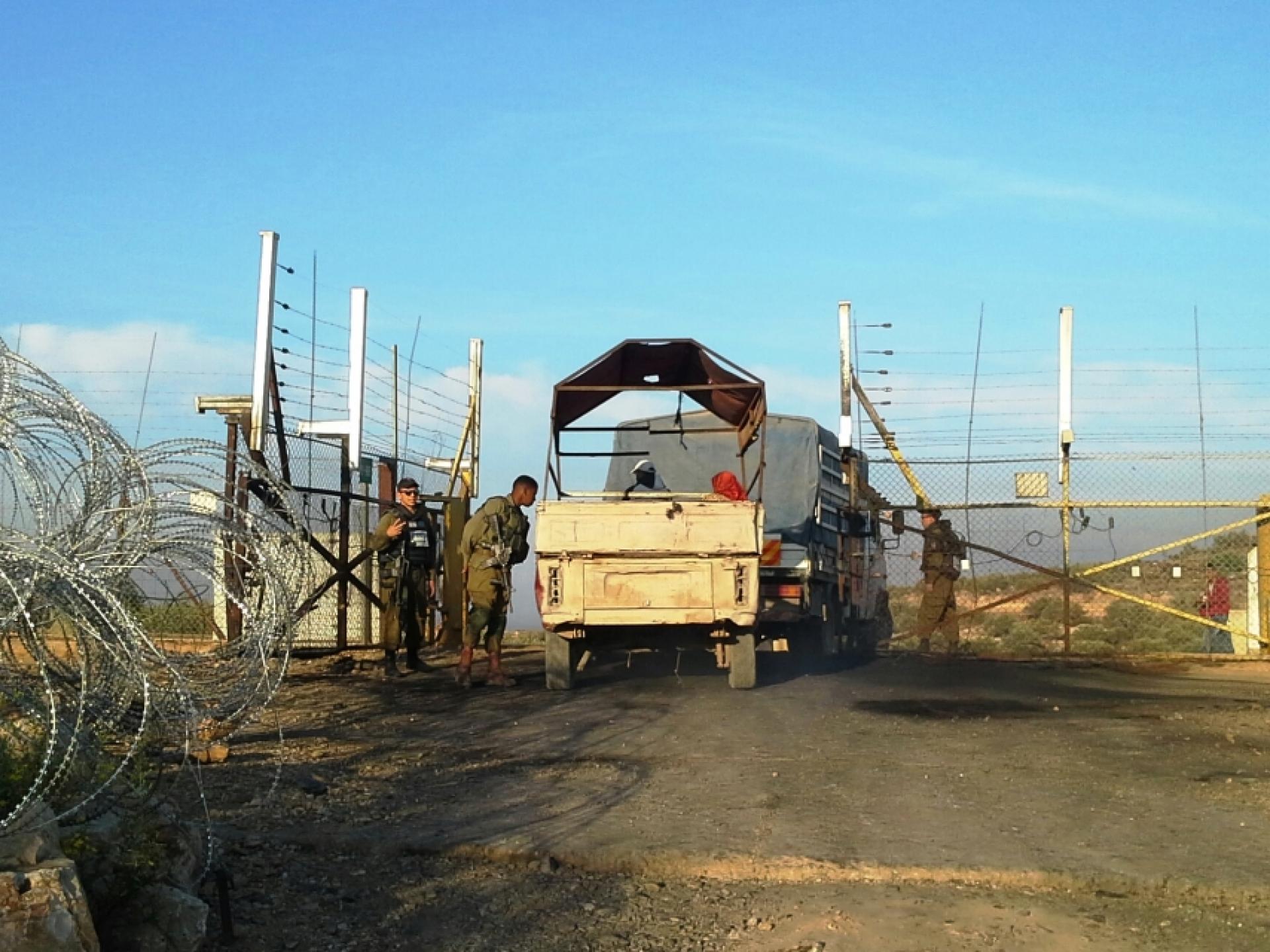 We returned by way of Jayyus, went to visit Z. in Azun and back to Israel via the Eliyahu CP. There were only two vehicles with Israeli number plates being checked. When we left we toured at the Ministry of Defence and the Security Company facility to see and wonder at the environmental development. We were told how far we were from the Green Line and we made a short tour with explanations till the Ras A-Tira CP, permanently closed, and a visit a Arb A-Ramadin.

From there we  drove southward to the Elkana enclave and to Hanny’s gate, in order to explain how the separation fence bypasses the settlements which are built on Palestinian soil, in order to give the impression that they are “in Israel”. The pile of rubbish near Hanny’s gate grows larger and larger. It doesn’t seem that this gate which is supposed to be opened for the olive picking, has been opened this year. Not much is left of the olive groves.

The big surprise awaited us near the Oranit CP which we wanted to show our guest although we knew that it was closed. When we approached on the “Road of Life” we saw an unexpected view: 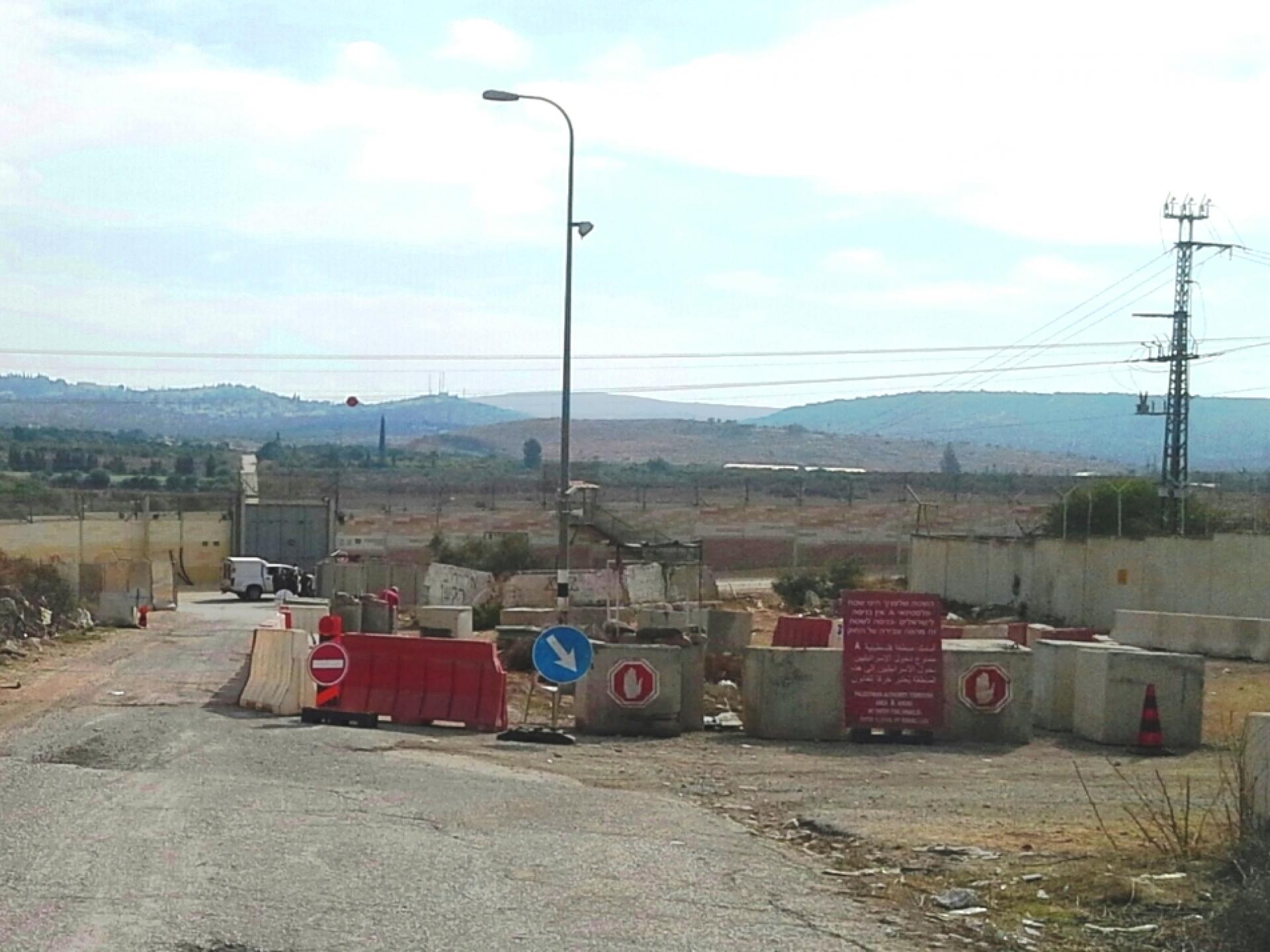 Looking eastwards. Blocks, a signpost “A Zone”. In the background the Oranit CP 1474 in the separation wall
Photo:
Annelin K

We descended from the car and asked a worker who worked by the blocks what that was and he answered: a film.

It turned out that this wasn’t a joke. We went to the CP near which there were soldiers and two military vehicles. The pleasant soldiers from the Magen Dan base explained that indeed they changed the area to look as a  CP for “Fauda”.

Life as if in a film according to Anneline 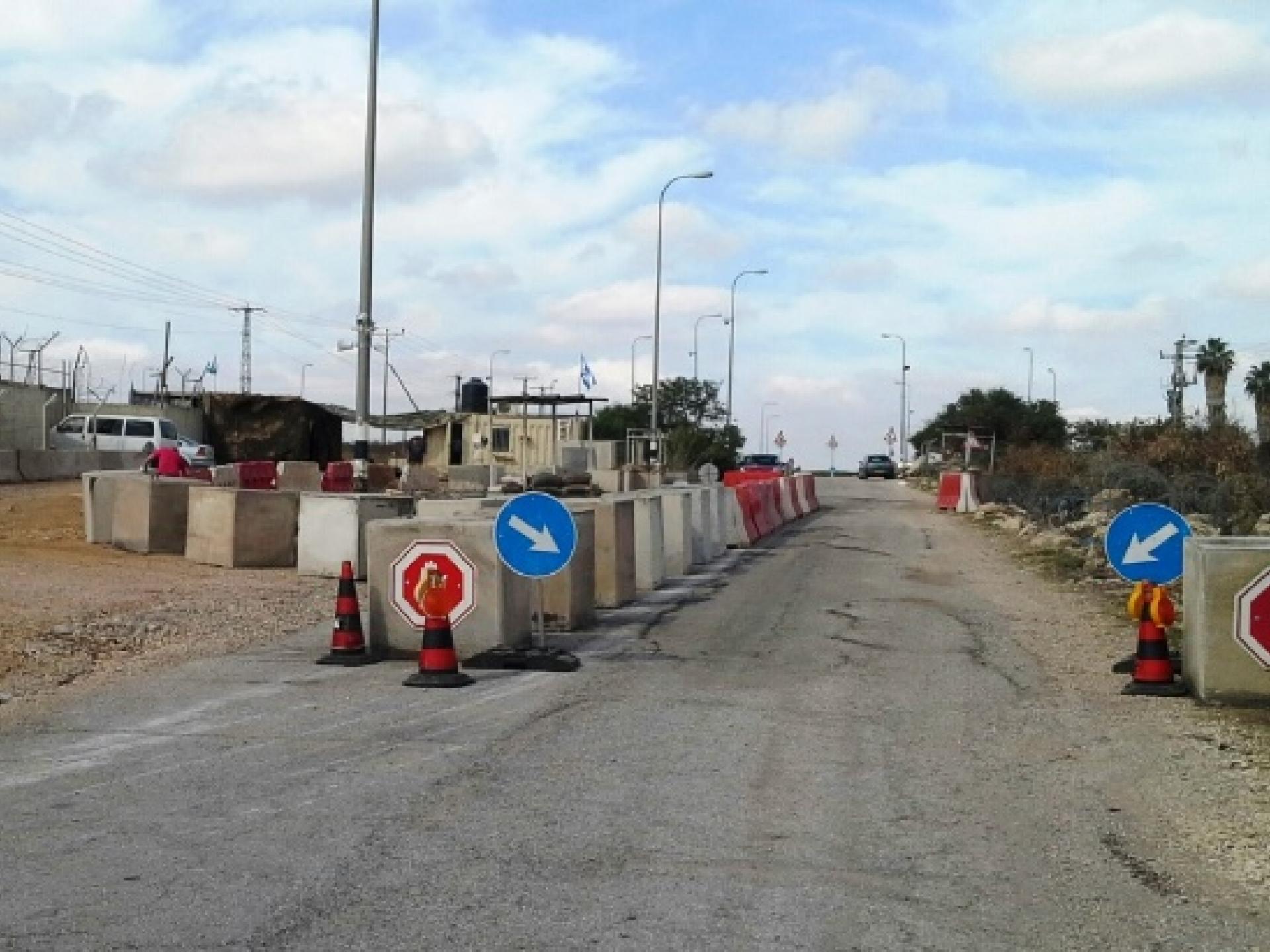 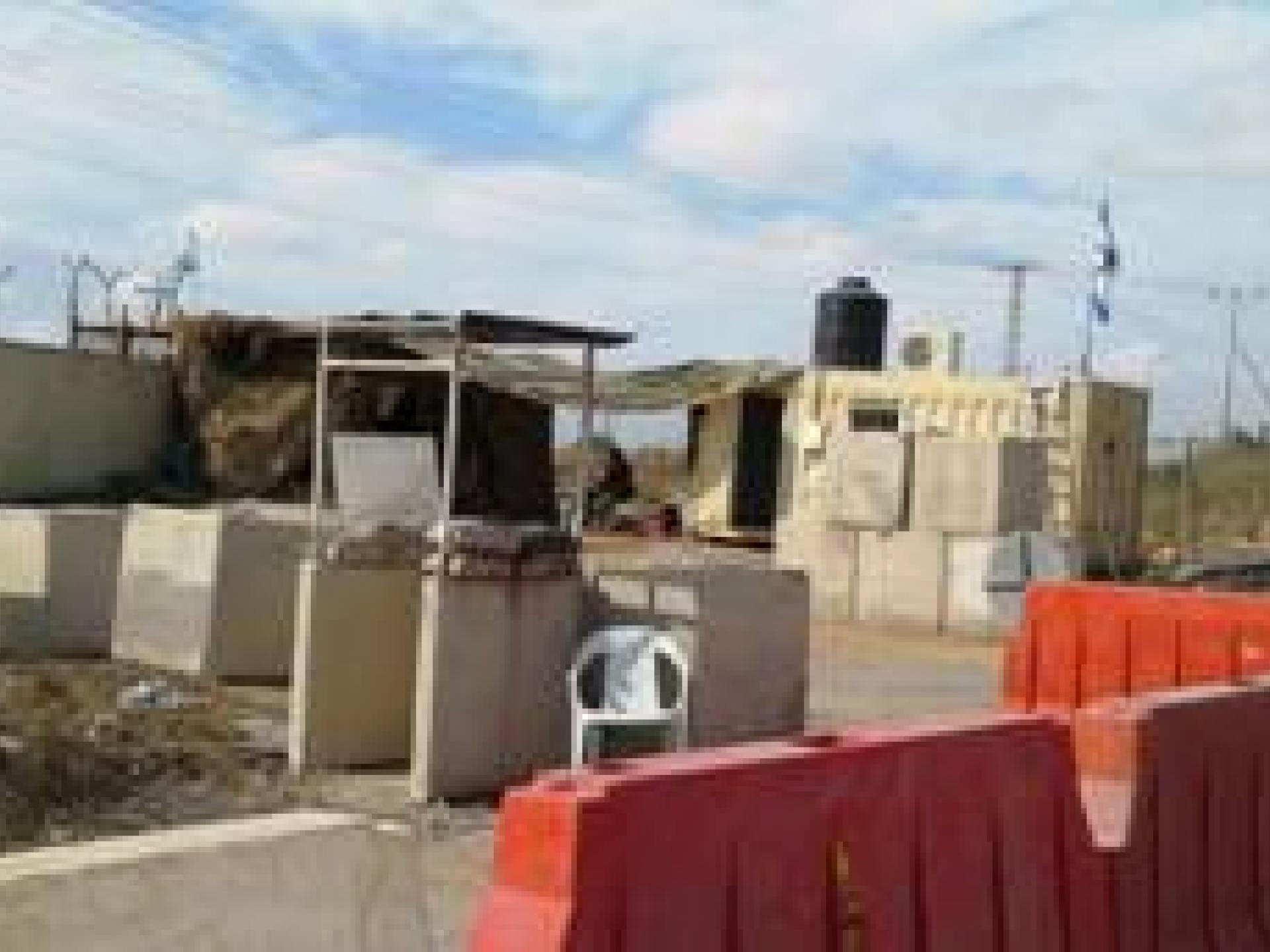