All five checking stations were open when we arrived at 5:30 but the progress forward was agonizingly slow and from what we could see the lines reached back very far, perhaps as far as the road (as some later told us). It was hot. The mood was tense. As soon as we entered, people called to us from the lines to speak with them and told us that the situation had been like this  -- unusually long lines, slow progress – since the start of Ramadan the previous Thursday.  Others told us that the previous day, Monday, had really been hell, as though this morning were not bad enough. But that was before the line discipline broke at 5:37 and people rushed the entrances to the cages. We had thought, in our innocence, that those responsible for running the checkpoint would have deliberately eased conditions there in honor or Ramadan. We found exactly the opposite.

What didn’t go on there, in addition to the standard melee of pushing, shouting, whistling, climbing to the top of the entrances to the cages (which we also though, in our innocence, people would spare themselves during Ramadan)? Bathrooms locked in face of the those brave enough to enter them; a security guard who shouted at, provoked, and threatened the men crammed into the cages that he wouldn’t open the turnstiles unless (unless what? who knows?); the woman soldier responsible for opening the turnstiles suddenly beginning to open them one at a time, rather than all three at once, which naturally only heightened the tension, anger, and despair.

We walked outside for a moment to check the movement of traffic through the vehicle checkpoint, which has improved considerably since the removal of the traffic circle that was responsible for difficulties for so many years. And when we returned to the shed, we were hit by the sharp odor of human sweat (caused by all the action at the entrances to the cages), in addition to the heat and the dirt inside. 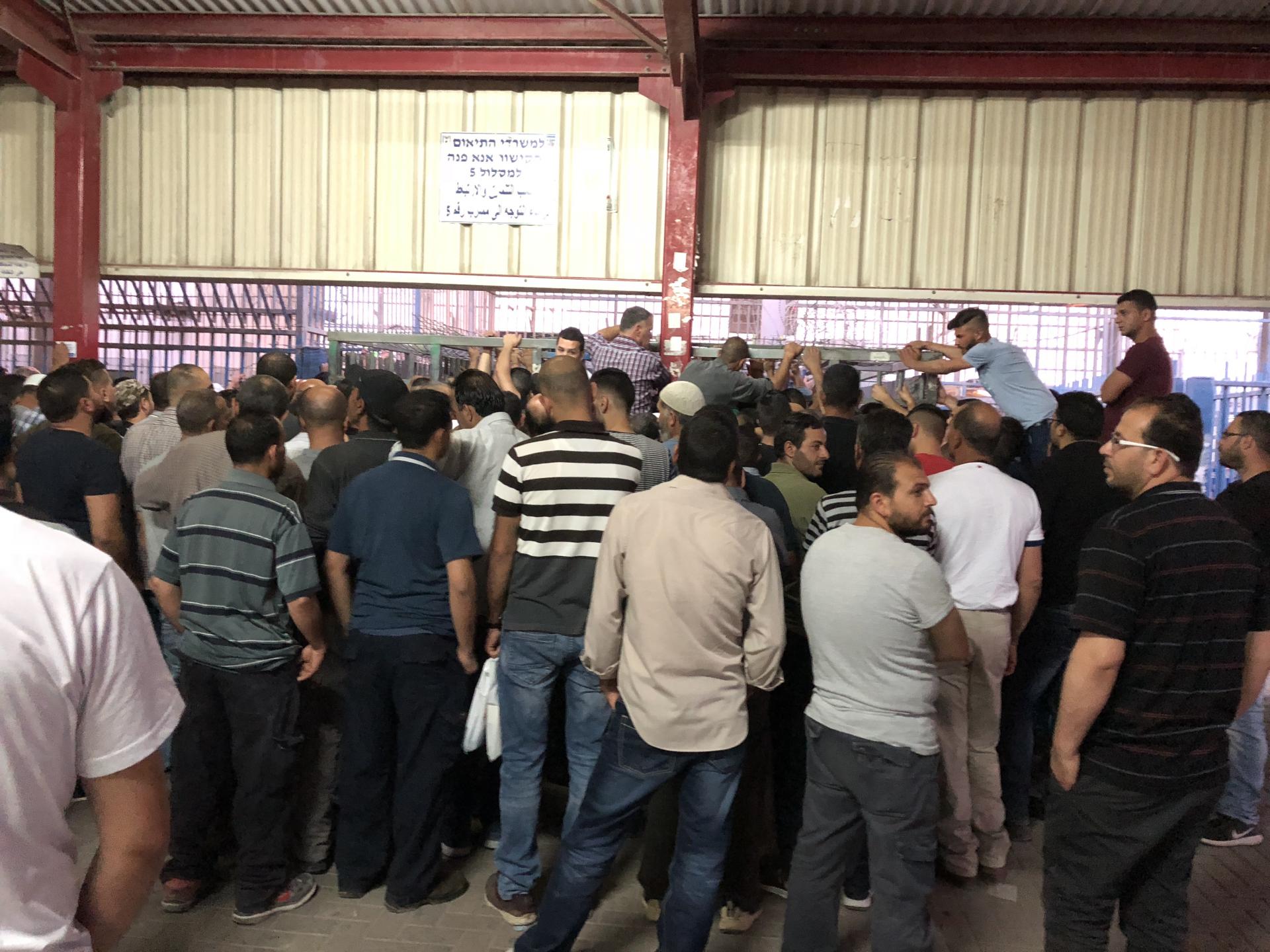 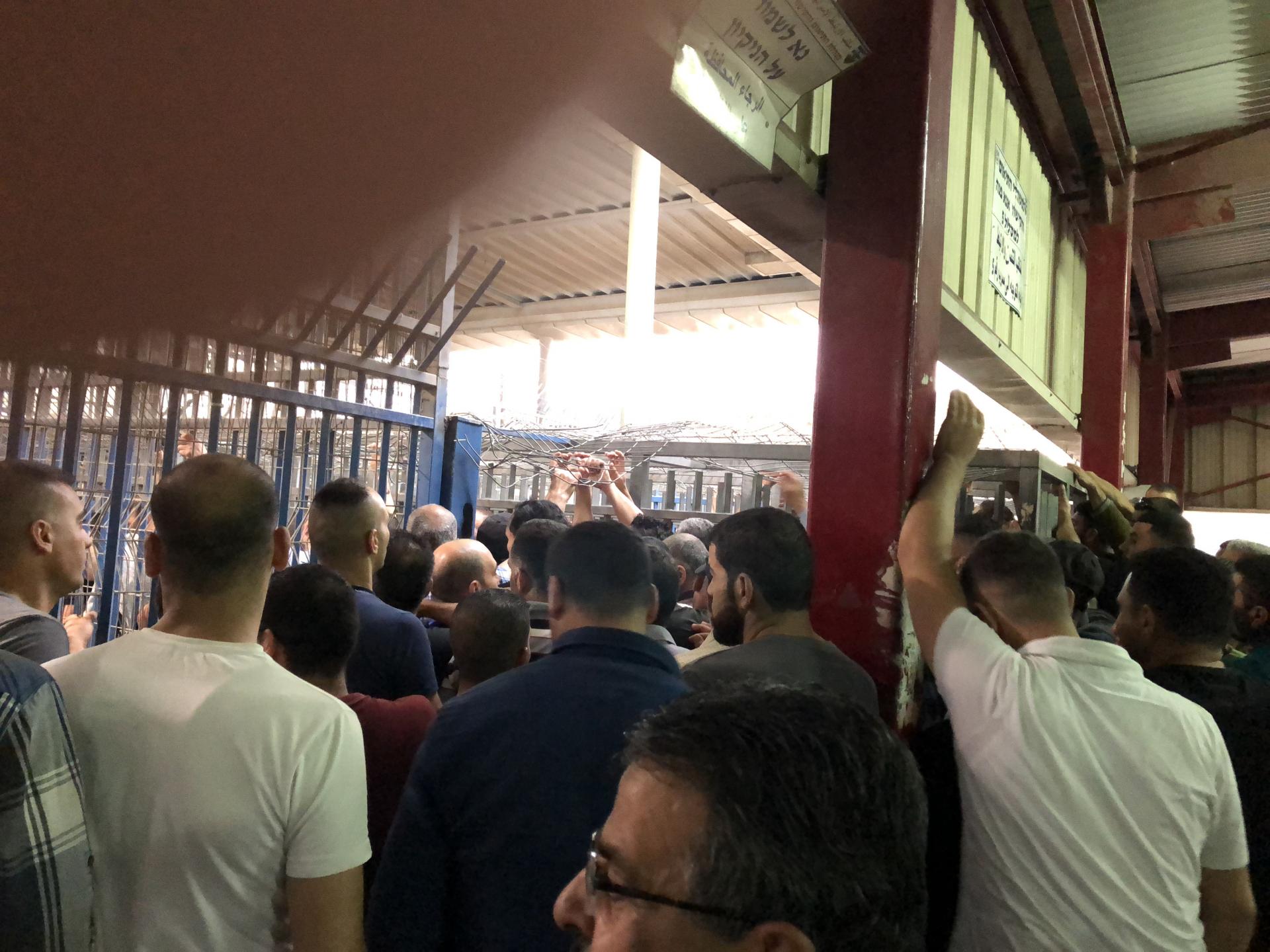 In the course of the shift people approached us with stories of the situation during the previous days and also with some insights. Two of them told us that since the start of Ramadan, the workers in the chicken processing factories in the nearby Atarot Industrial Zone, who usually pass through the checkpoint in buses, now must come through the pedestrian checkpoint – which adds hundreds of more people to the lines during these “peak” hours (see a conversation with the Civil Administration officer below). In short, after an hour of the melee, lines had formed again by 6:40, although the tension remained high, mostly at the entrance to the cage on the left, which is known as a magnet for trouble.  However, at 7:30, one of the checking stations closed and did not open again before the end of our shift.

A crowd began to gather at the Humanitarian Gate starting at 5:45 and rose to more than 20 people before the Civil Administration officer and two security guards arrived at 6:20. At first it appeared that the security guards had taken command of the gate and were operating it in a new (and detrimental) fashion. They opened it, checked the documents of the people coming through on the inside (between the gate and the turnstile), then pushed back the crowd of people whose documents had yet to be checked and locked the gate until they would decide to open it again. Earlier that morning, we were told by people who regularly pass through the Humanitarian Gate that yesterday, when the gate was operated only by security guards because no Civil Administration soldier came (or came only after they had passed through it), this new system caused considerable anguish, not to mention wasting people’s time (one aspect of “yesterday really was hell”). But while we were considering how to protest this new and abusive system, we saw that the Civil Administration officer had apparently decided to assert himself, because the next time the gate opened he allowed all those still waiting to go through at once. And thereafter he operated the gate smoothly and properly until about 7:30, when,  for whatever reason, the officer and the two security guards left the checkpoint via the shed (a rare occurrence), and the gate remained closed until the end of our shift. 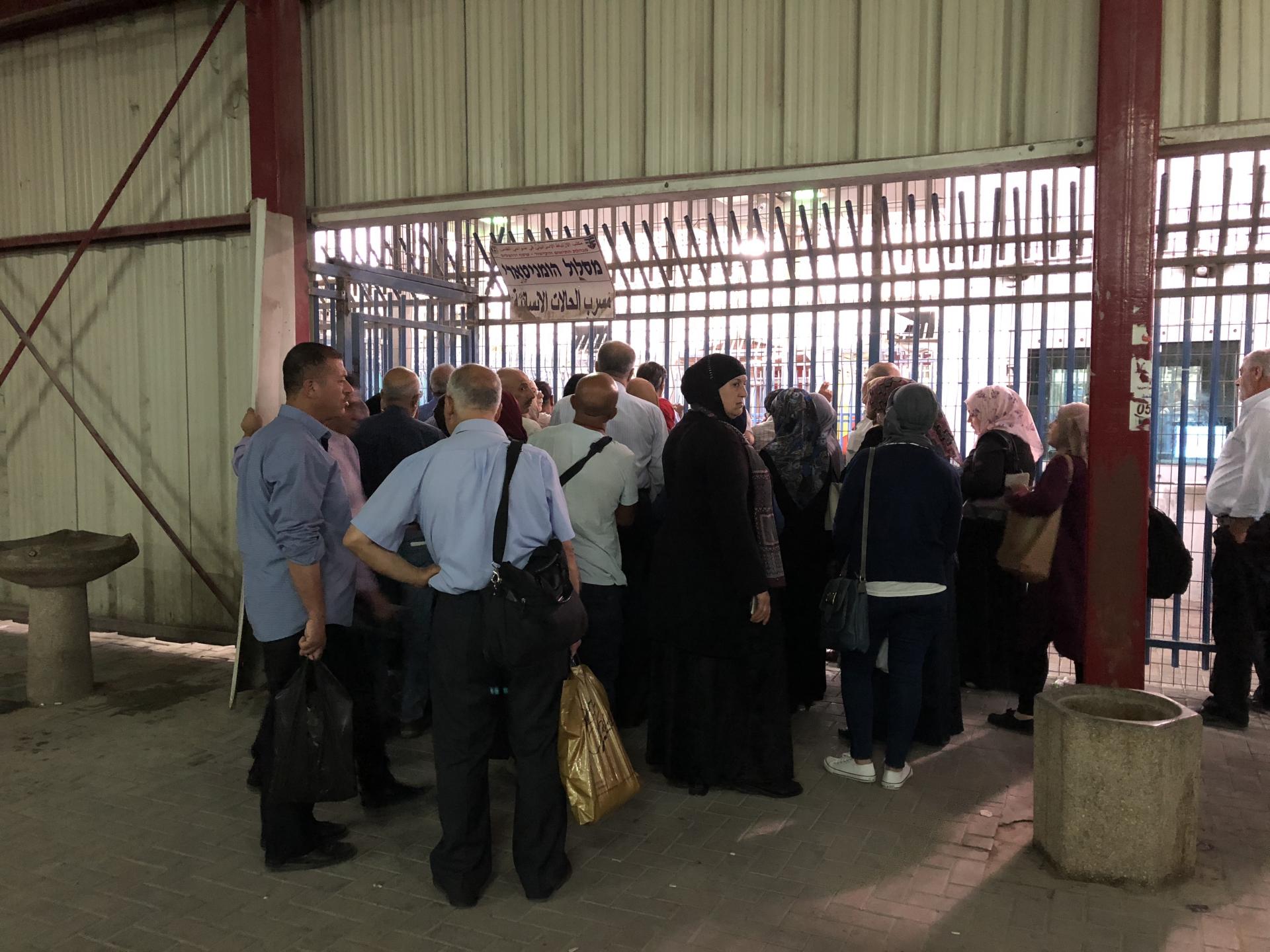 Before they left, however, we asked the officer about the cancellation of the arrangement for the workers in Atarot who usually passed through the checkpoint by bus, and he explained that the checkpoint’s public transportation land was closed for Ramadan.  We, of course, know that this holds on Fridays during Ramadan, when the arrangements for passing through the checkpoint change and are expanded. But why the lane is closed during the work week was beyond our understanding. And since you never ask “why” at Qalandia, because that question is irrelevant there, we will seek an answer to this question through other channels.

At 7:15 we joined the shortest of the re-formed lines going through the cages and exited the checking station 30 minutes later.