A tour of the checkpoints in central and southern Jerusalem 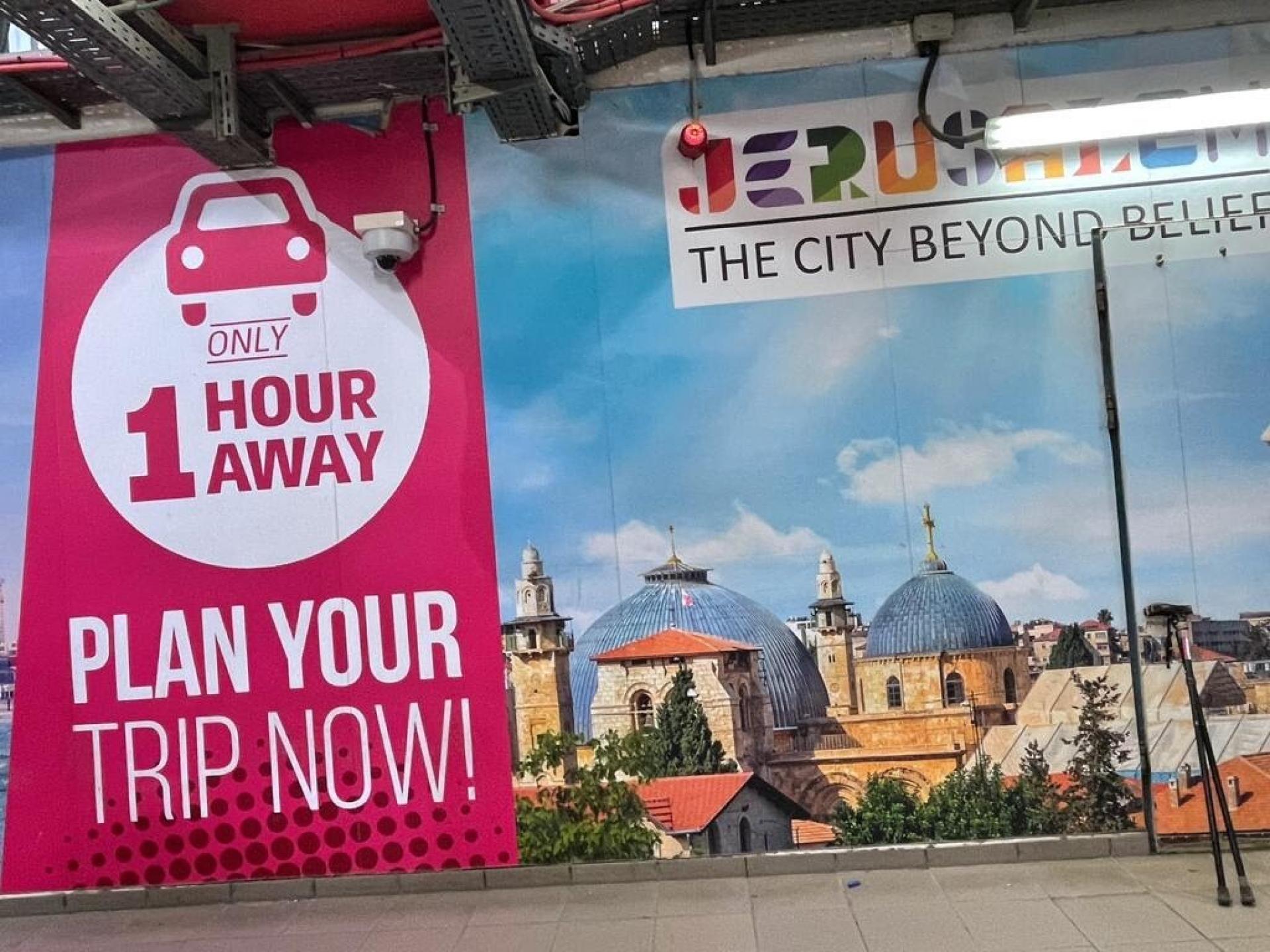 And Netanya asks: To whom are they trying to sell a dream here? 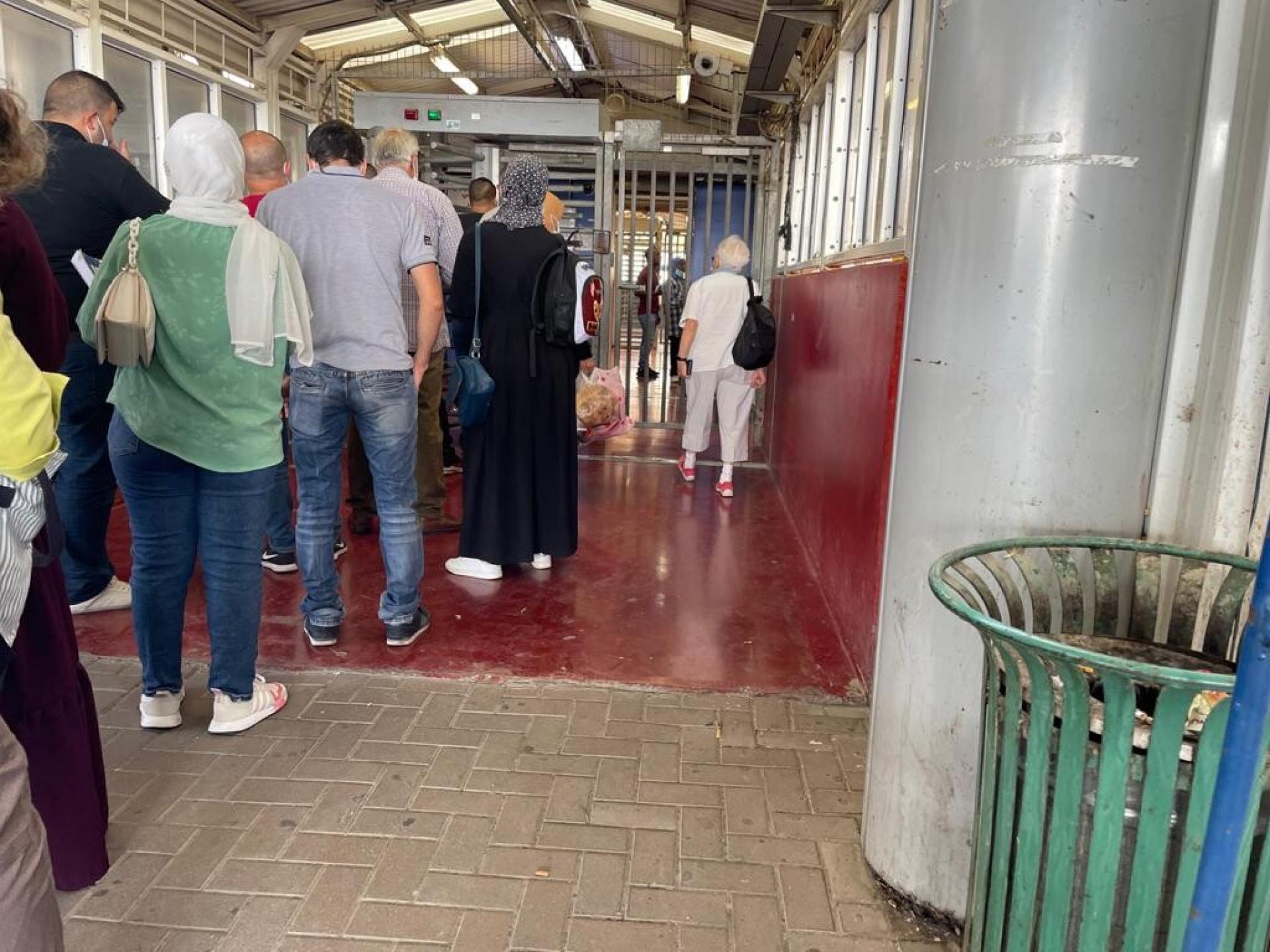 A long line at the Olives Checkpoint 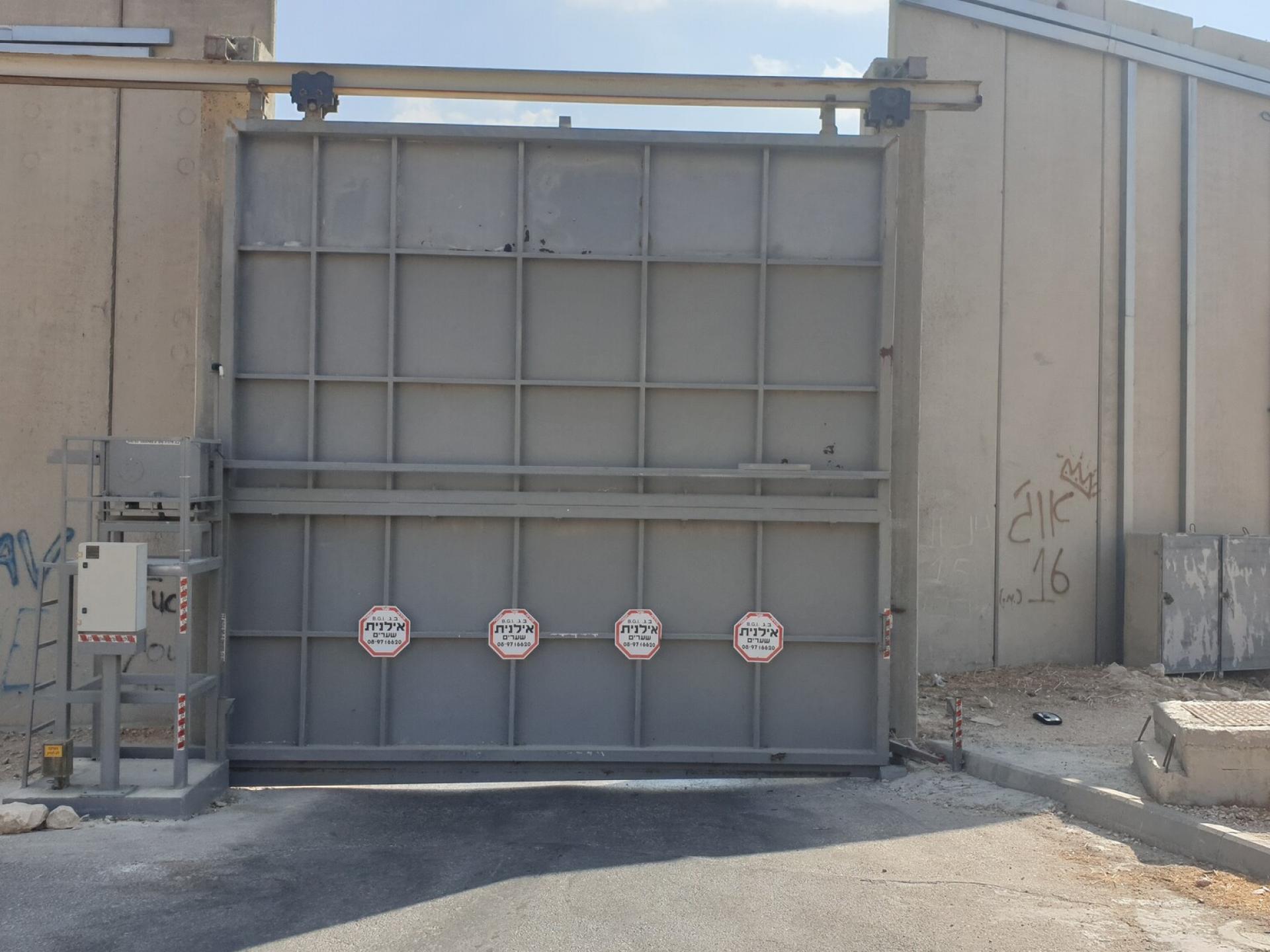 A gate in the separation wall

Between Jerusalem and A-Za'aim to Anata

During the ten days of atonement  the Palestinians seem to be taking advantage of work days without the (recently expanding) closures, but the movement of those entering is still relatively sparse. In general, the mood is subdued after the capture of most of the escapees from Gilboa Prison. The Jerusalem Municipality is vaccinating students with a Palestinian identity card who are studying in Jerusalem. Heavy traffic jams in the morning on the access roads to the city, both to the old city and to the new city. The Yom Kippur closure

The Rosh Hashanah closure ended two days ago, and tomorrow at noon begins the Yom Kippur closure. The humanitarian crossing is not open, and only one crossing is open on the Israeli side, but there is no overcrowding. Overall there are fewer people crossing than usual, in this shortened work week. Most people look away from us with a dejected look. One can easily sense the frustration that followed the euphoria of the bold escape from Gilboa Prison, after four of the fugitives were caught and failed to reach the West Bank or across the border. The images of humiliation, the evidence of the lack of assistance from the Israeli Arabs, the feeling that the failure demonstrates the situation of all Palestinians - trapped with no possible way out - all this was very painful.

A security guard is sent to remove us as usual, but we refuse and they leave us to our own device. Across the board we hear not a word of trust in the Palestinian Authority, their tragedy and ours.

The poster that guarantees access to Tel Aviv, which is only an hour away from the checkpoint, looks both pathetic and cruel.

Terrible traffic jams for those leaving the Har Homa settlement towards Jerusalem. Luckily we are in the opposite direction to Sheikh Sa'ad via the new American road. Haaretz journalist Nir Hasson wrote that this road is beneficial to the residents of East Jerusalem in their movement to Bethlehem and the southern West Bank, but we did not see impressive traffic, perhaps because the continuation roads are no good in either direction - neither to Bethlehem nor to Old City of Jerusalem’s center.

A new fence was built at the Sheikh Sa'ad checkpoint, and now obstructs the view of those about to cross from the Sheikh Sa'ad to Jabal Mukaber and Jerusalem (perhaps because of the German television’s video filmed from there?).  But now it is clear from the outside that there is no queue, just a drizzle of people leaving. From a conversation with a few students attending high school in Jabal Mukaber we learn that they have no special problems in transition. They say all students are vaccinated. Even those with a Palestinian identity card. The crossing at the checkpoint drags only when the Military Police ask for certificates from both younger and older students. The checkpoint passages gets blocked then, but it happens only infrequently.

In a conversation with the head of the neighborhood council, N., he confirms that the municipality invited all students from Sheikh Sa'ad who are studying in Jerusalem to be vaccinated in Jerusalem - regardless of the identity card. Another point of credit for the mayor. There had been concerns of problems in students’ passage due to the lack of vaccines from the Palestinian Authority.

Travel in the neighborhoods of Ras al-Amud, Abu Dis and a-Tur and the Olive Checkpoint

Up to the fork junction to the Silwan neighborhoods there are no traffic jams and it’s evident that the American road (paved in 1920) has been widened and renovated in the past year. From there on, the road is narrow and bumpy and serves both directions. We spent more than half an hour on it until we climbed the Mount of Olives and from there to Abu Dis and the Ras al-Sabitan checkpoint - El Zeitoun - which is on a hill inaccessible on foot. This checkpoint overlooks Road 1 to Ma'ale Adumim and the Dead Sea and the vehicle-checkpoint through which only Israelis and permanent Palestinian residents of Jerusalem are allowed to enter the city. Everyone else must travel to Azaria and walk through the Olive Checkpoint with a permit.

We passed the checkpoint on the Palestinian side and were surprised to see a large queue at the usual exit checkpoint to Jerusalem. The transfer rate was very slow. After about a quarter of an hour another position was opened and the queue dissipated.

Once again we found that there is no correlation between a printed vaccine certificate and the information contained in the checkpoint data. Is it because the immunization certificate is fake? Not necessarily, perhaps in the DCO in Qalandiya, they have not yet entered the data of the person who was vaccinated. On our previous visit there was a discrepancy due to the checkpoint computer not updating the DCO data from a few days ago (and we were told then that at the checkpoint the data is displayed only as there is a certificate / no certificate and the examiners do not have access to the DCO computer system). In those cases of discrepancy, the Palestinians are sent to the very distant Qalandiya DCO to clear the matter.

The person who arranged with Hannah B. to meet in Issawiya and travel to show her this barrier and detail the problems in its opening did not come. We had to find the checkpoint ourselves with the help of the driver. This is a closed iron gate in the separation wall, which prevents access to both a-Za'im and Anata, and to the a-Za'aim checkpoint on Road 1, which allows entry to Jerusalem and Israel. Before COVID it would open every morning for two hours from 6:00 to 8:00 and in the afternoon from 16:00 to 18:00. Workers went to and from work and buses to Anat'a and non-Za'a. Since the beginning of COVID it does not always open, and when it does- for shorter time periods.  Hannah will write a complaint to the Civil Administration regarding the matter. Hope it helps.

Back to Jerusalem via a-Tour, we see a crowd on the sidewalk surrounding a team of policemen and people, and stop to see what is happening.  It turns out that a foreclosure team from the municipality was dispatched to a  house whose residents owe NIS 150,000 in property taxes! They are currently asking for NIS 2,000 and will give an extension of three months to obtain the rest of the amount. But the members of the household do not have such a sum. The head of the team explains that all this is part of an operation to try to offer favorable conditions to residents for repaying years of property tax debts. The head of the team teases and tells us: "Well, try to help him get money to return the property tax." We give the concerned neighbors the telephone number of the humanitarian hotline and know that the situation is actually unsolvable. The people in the house are older, so it is hard to believe that they will cancel their residency and deport them. But will the municipality compromise on a more reasonable amount?

Located adjacent to the Separation Wall ("Jerusalem Wrap") at the north entrance to Bethlehem, this checkpoint cuts off Bethlehem and the entire West Bank from East Jerusalem, with all the serious implications for health services, trade, education, work and the fabric of life. The checkpoint is manned by the Border police and private security companies. It is an extensive infrastructure barrier and is designated as a border terminal, open 24 hours a day for foreign tourists. Israeli passport holders are not allowed to pass to Bethlehem, and Palestinian residents are not allowed to enter Jerusalem, except those with entry permits to Israel and East Jerusalem residents. Israeli buses are allowed to travel to Bethlehem only through this checkpoint.
The checkpoint, which demonstrated harsh conditions of crowding and extreme passage delays for years, started employing advanced electronic identification posts and has upgraded its gates