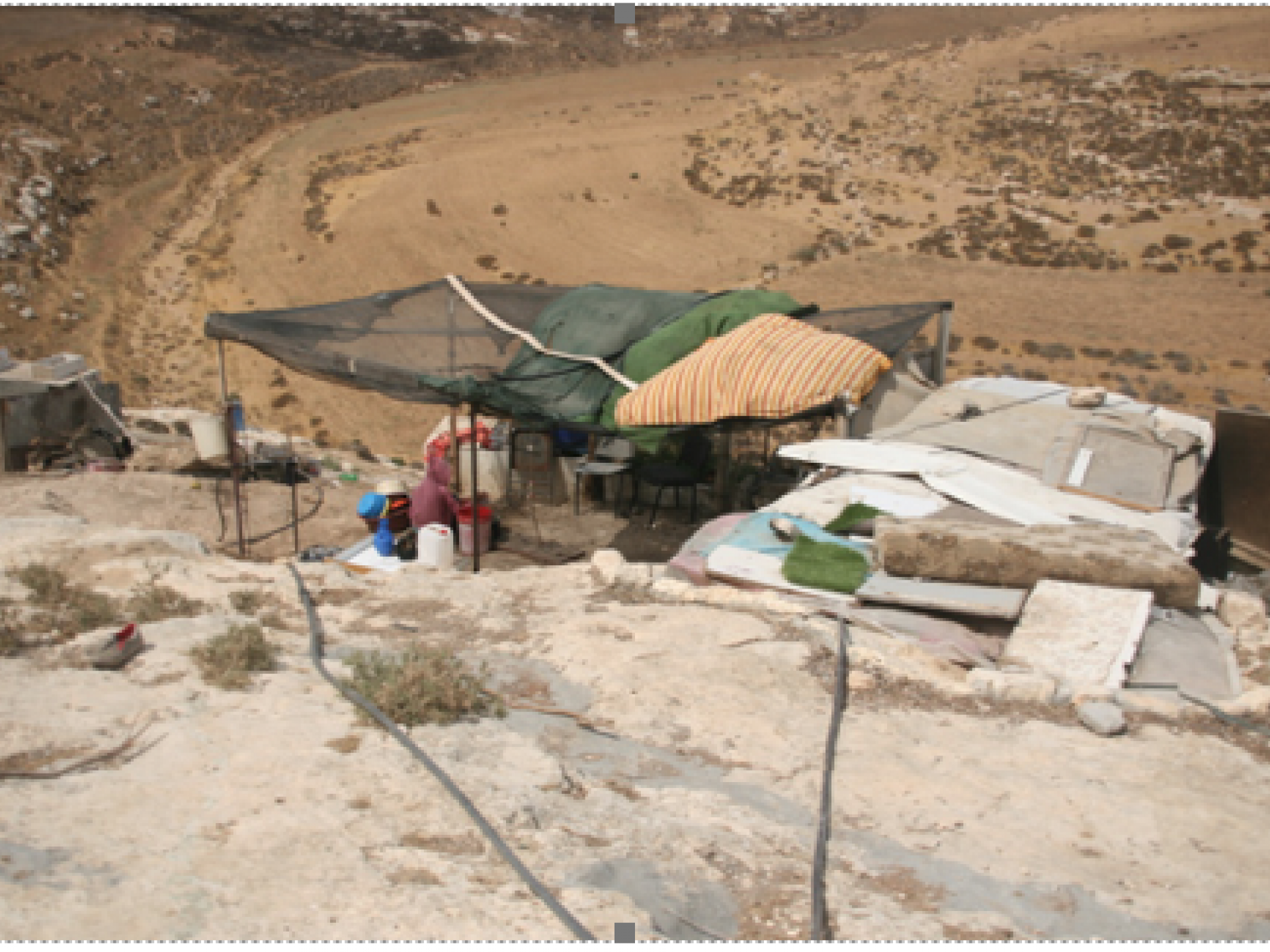 Southern Hebron Mountains: The summer home of the shepherds' family, in winter they live in a cave 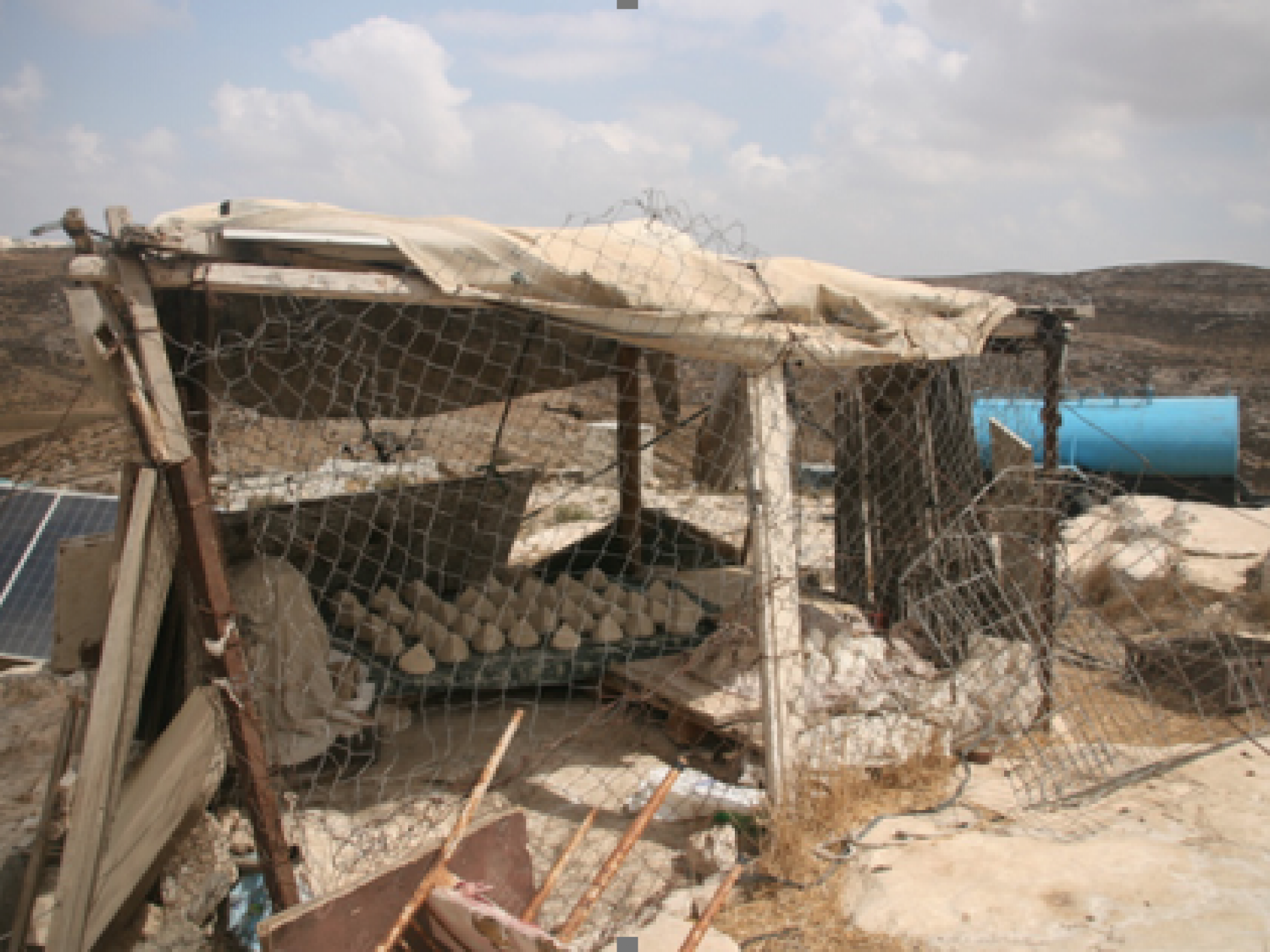 Southern Hebron Mountains: The family's industrial area, where labane cheese is made 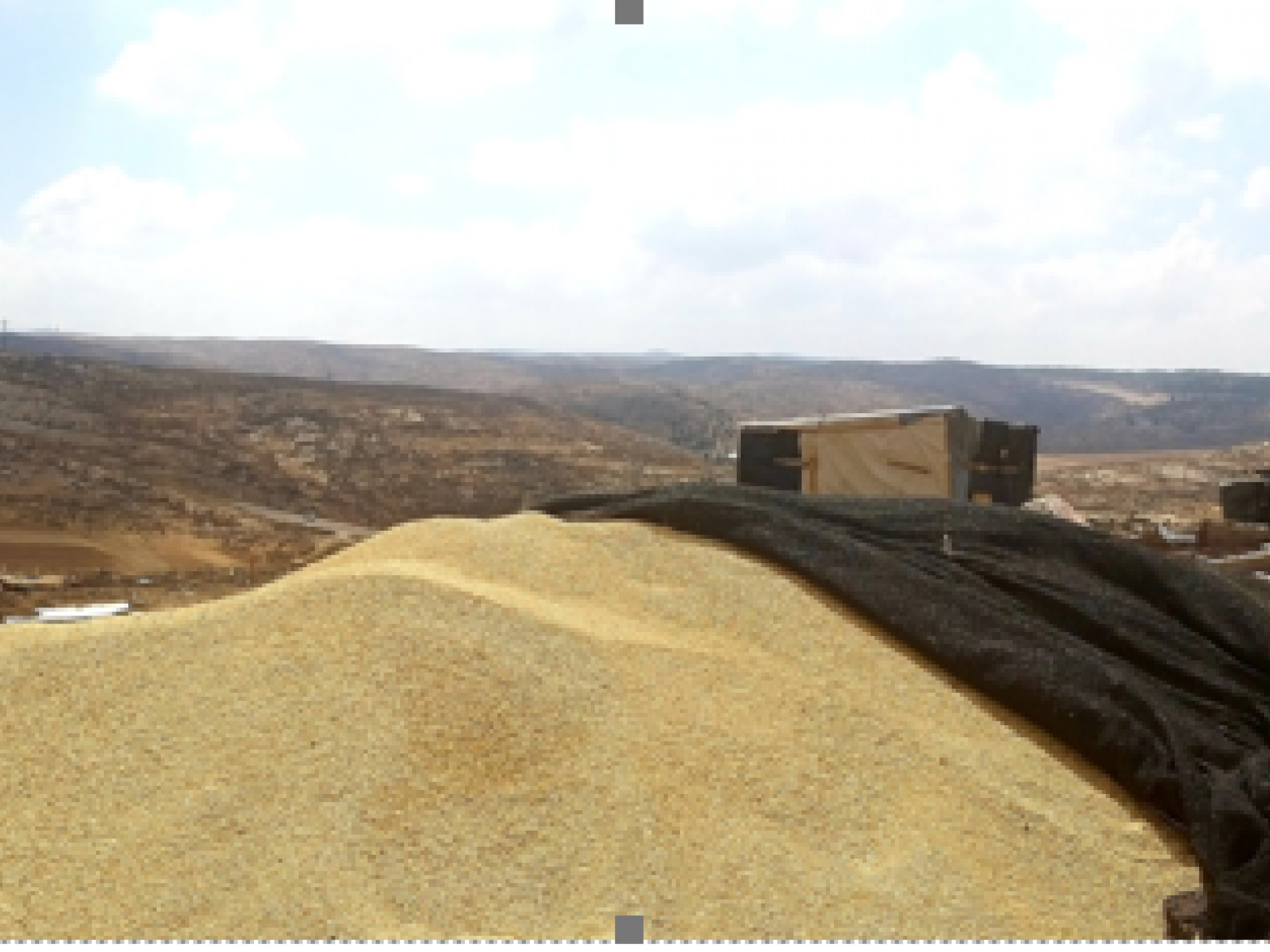 The car-park at Meitar Checkpoint was full, as was the area of Gate 11 (note that this gate is a hole in the Separation Fence which is crossed on foot = 1 for each foot…). According to M., most Palestinians crossing there hold permits to work inside Israel, but they prefer to cross here at “Gate 11”, as Shuli Bar so aptly described in her own report on the northern checkpoints: this must embody their hatred of the checkpoints and all that these represent.

We turned to road 317, and some kilometers further on, between Sham’a and Asael we turned into a potholed dirt track, to a place called “Mukatal Amsalam” – the casualty Amsalam, killed in 1967.

Two shepherd families live there. When we arrived, a couple came to greet us – Amar and his wife Umm Yusef. They have five children – three sons and two daughters, the oldest 13 years old, and the youngest a 10-month old baby

. The family have a winter and a summer home: in the winter they live in a cave, and in the summer, they come up - it’s hard to live inside a cave in the summer.

Their livelihood depends on their sheep and goats. When we got there, the flock was grazing in the wadi, herded by the children. During the schoolyear the children stay with their grandparents in Samu’a. Amar himself studied only four years, and apparently the education of his children is very important to him.

The family’s summer home has electricity coming from solar panels, probably donated by the European Union. Water comes from a water hole near the cave.

In the family’s “cottage industry” they produce labane – salty white cheese. Here the solar panels are situated as well as the spare water tank. Every cubic meter of water here costs much more than an Israeli citizen pays for it. Amar has dug a new water hole up the hill to collect rainwater, for the donkey that brought up water from the hole next to the sheep collapsed under the sheer weight. A settler-colonist by the name of Shai, who Amar says is responsible for the settler-colonies, ordered him to close the hole, but no one has come to do it yet. We also saw a pile of barley seed – feed for the sheep in winter.

Umm Yusef went off to prepare tea with sage growing in their yard. The glasses were washed in water buckets and the tea boiled over an open fire. The scent of burning wood was intoxicating.

And to think that along road 317 infrastructure works are now carried out to lay water and power lines, for Jews only of course.

In the background one sees Sham’a. Amar summoned a tractor to smoothen the track leading to his place from road 317, and enable a truck to bring feed for the sheep. Naturally, the Israeli army came and forbade him to do this. Having no other choice, he did it with his own hands. I can hardly imagine what the track was like earlier, if even now only a skillful driver such as M. can handle it.

I left with a heavy heart.