Theft of Nabi Salah’s land to expand the Halamish settlement 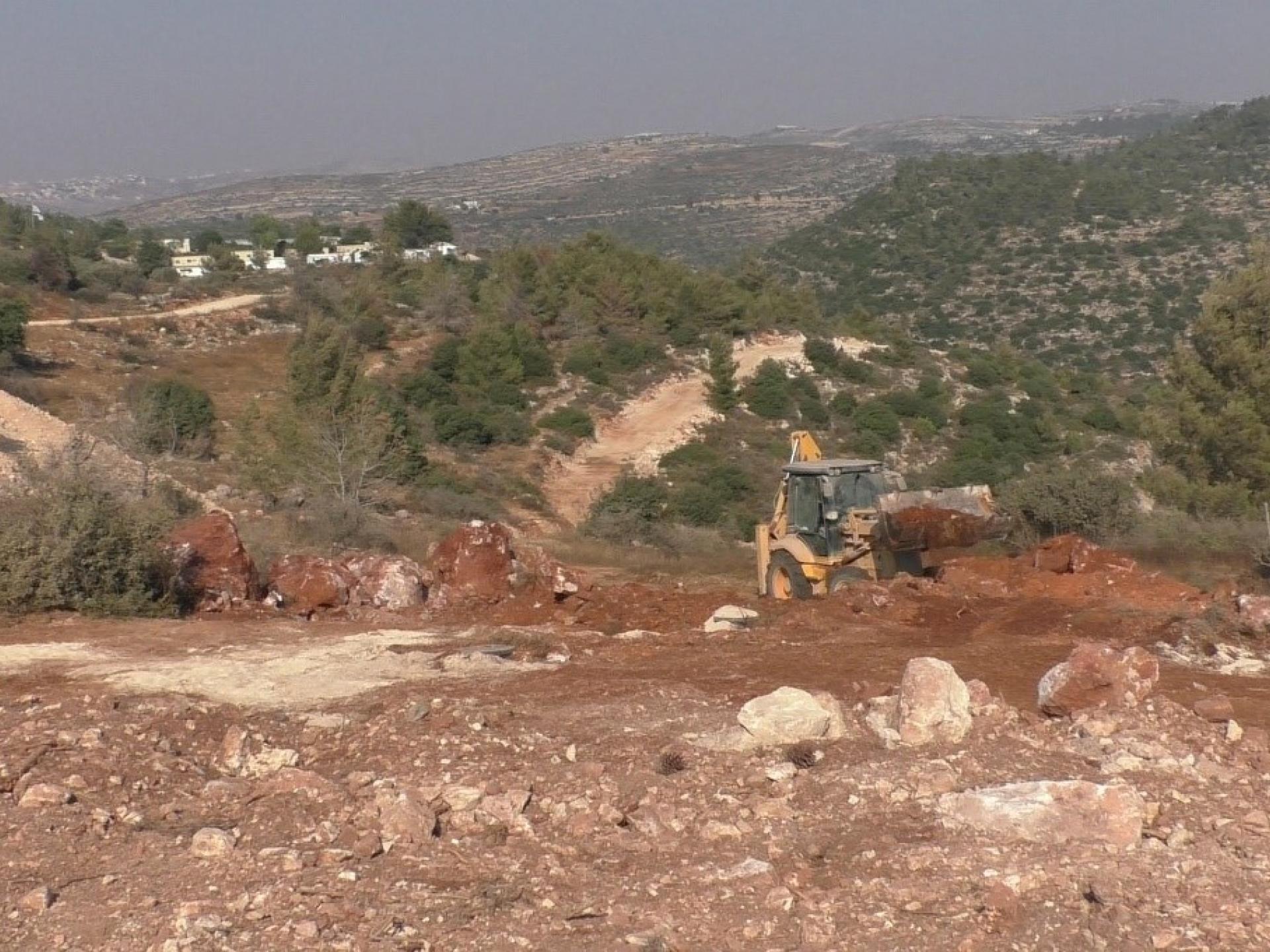 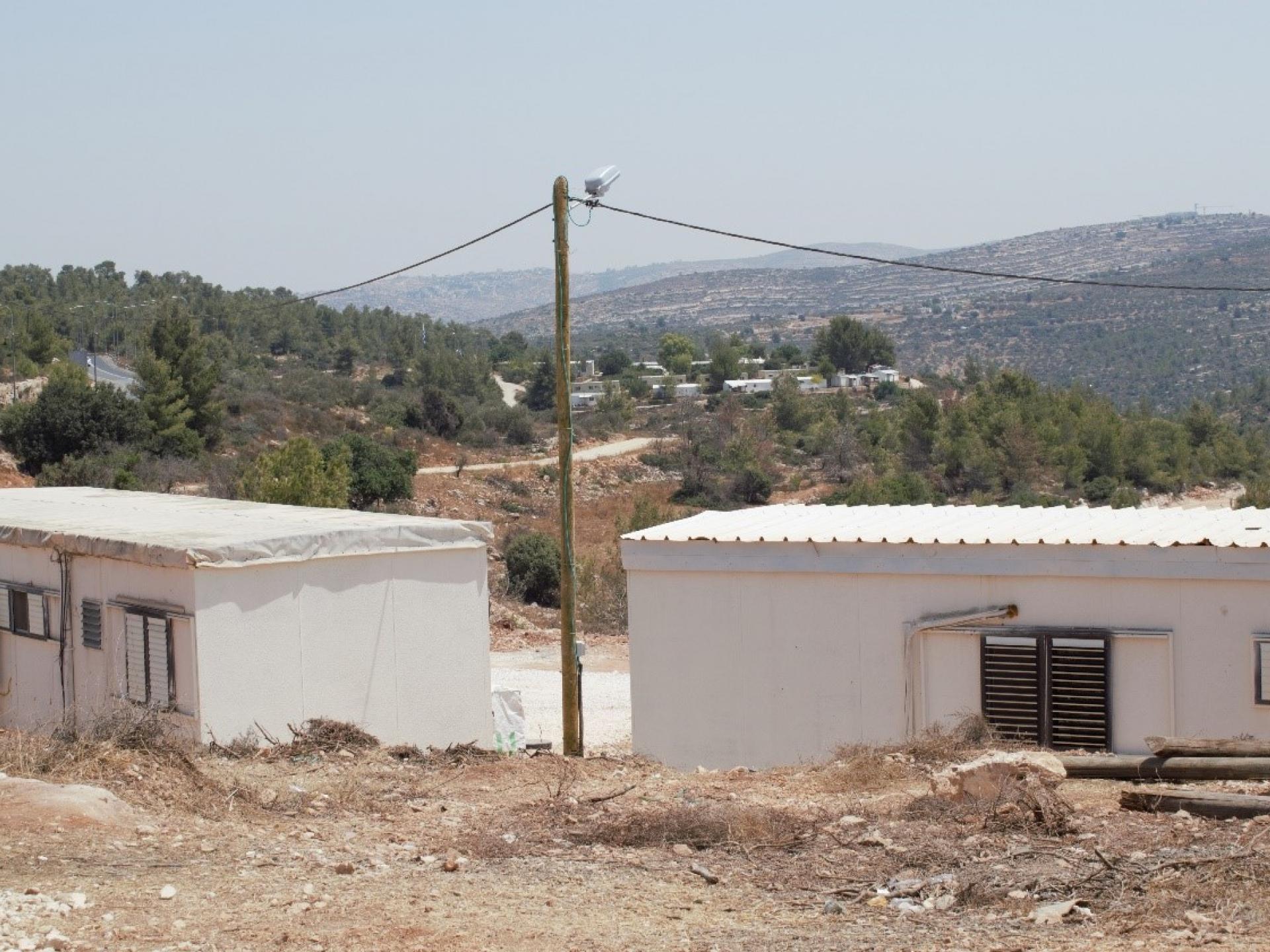 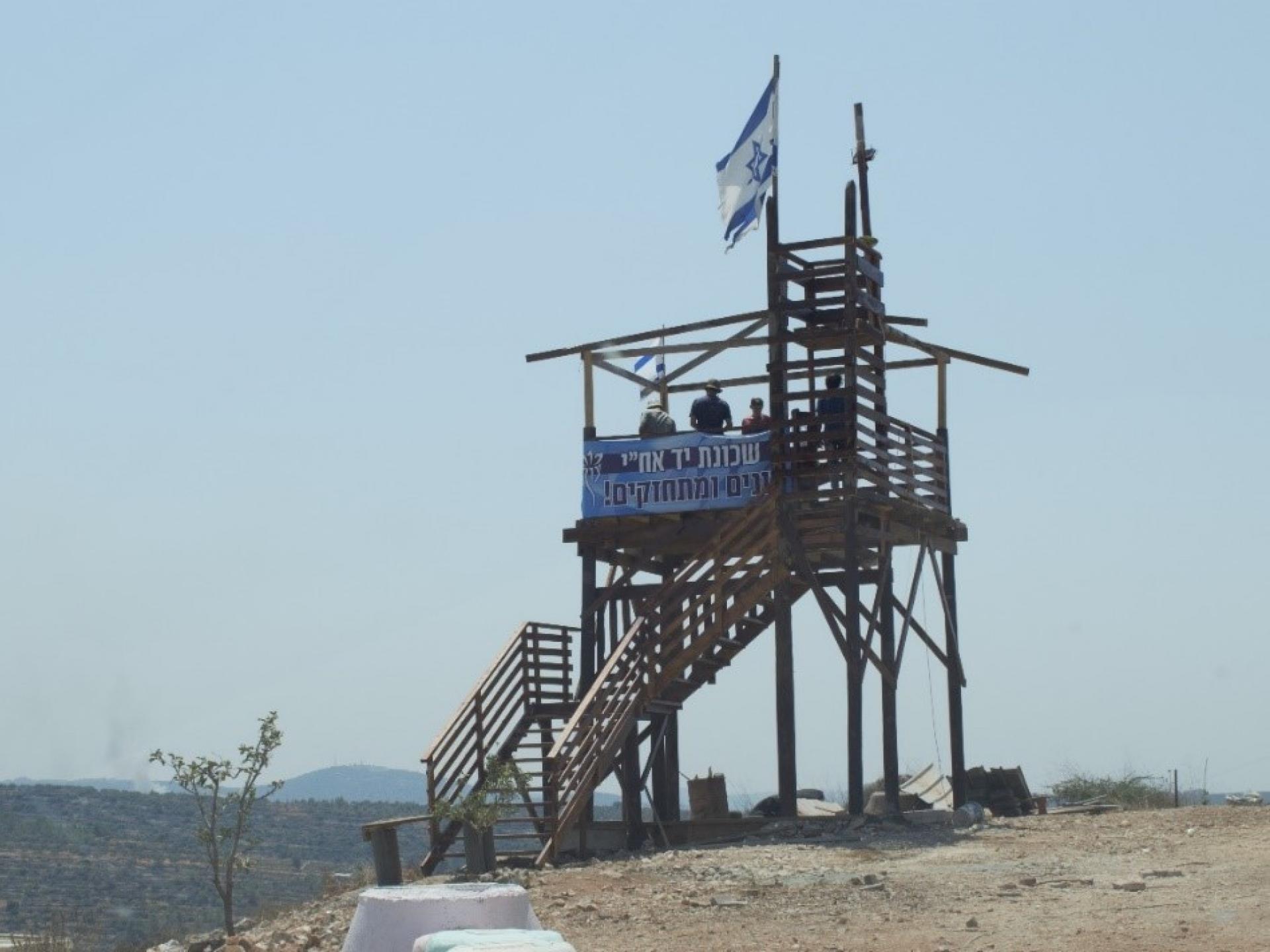 Follow-up meeting after the closure

of a portion of Highway 450, an important traffic artery between Palestinian villages.

Present at the meeting with Naji, the head of Nabi Salah village, and with M., a landowner:  Karin Lindner, Irit Segoli, Nurit Popper, two guests, Naji Tamimi – the head of Nabi Salah village, M., a Nabi Salah landowner.  Naji asked to meet following closure of the road from the Umm Safa junction to Bitilu and the establishment of a new neighborhood on Nabi Salah’s land.  The neighborhood adjoins the Halamish settlement (which the residents call Neve Tzuf), east of Highway 450.

The signal to establish the outpost, which in the future will become a new neighborhood of the Halamish settlement, was given after the attack at the settlement on 21.7.17.  It was carried out by a resident of Kobar, a Palestinian village about 7 kilometers southeast of Nabi Salah.  Of course, the residents of Nabi Salah, Deir Nizam, Bitilu and other villages in the area had nothing to do with the murders.

When we approached the Umm Safa junction we could see tractors preparing a new section north of the settlement in a forested area.  Not too far from the junction of highways 465 and 450, on the road up to Bitilu, we saw many soldiers in the shade of mesh canopies.  They were apparently providing security for the new outpost, ensuring that vehicles with Palestinian license plates don’t pass.  On the other side of the road, opposite the entrance to the settlement, an area had been prepared to situate prefabs.  Four were already on site.  We saw connections to the water supply and infrastructure to supply electricity.  A manned wooden structure that looked like a guard tower was clearly visible.  On it was written “For my brother, building and growing stronger”…, an Israeli flag flying above.  A mesh canopy shaded the mobilization area.  Young people, apparently mostly local residents, wandered around.  When they saw us they grew suspicious.  We assumed it was because our guests looked like Arabs.  We decided to avoid a confrontation and drove away.  The plan was to return to photograph and interview people if possible.

We then drove to Naji’s home in Nabi Salah.  Naji and M. told us about the village and the theft of land that has been underway since the day the settlement of Halamish was established, and about the closure of a portion of highway 450 that connects area villages.  The road has existed for many years, long before the occupation.  They also told us about the Kos spring and the Huvlata archaeological site located inside the settlement.  They’re aware of the occupation’s policy to conceal cultural and heritage sites belonging to the occupied Palestinian nation.  Also endangered are the Deir Nizam and Umm Safa nature preserves located within the regional council’s boundaries as well as agricultural areas whose Palestinian owners are unable to access and cultivate them.

M. owns land that has passed from father to son.  He hopes to be able one day to transfer the land to his sons and grandchildren, and not have it taken by the settlers.  The great fear is that thousands of dunums are about to be annexed to the settlement.  They see a clear trend, to connect Halamish to the Nahlieli settlement to the south and the Atara settlement to the east.  The area, thousands of dunums in extent, will also include the Deir Nizam and Umm Safa nature preserves.  The journey between Nabi Salah and Bitilu, which up to now took ten minutes, will take more than half an hour.  Naji, forseeing the future, fears that all the land up to highway 443 will be closed to Palestinians.

M. said that most of the land on which the settlement of Halamish is located once belonged to Nabi Salah.  The Taggart police station inside the settlement belonged to the government of Jordan.  After 2002 the security zone around the settlement was enlarged even though the land was clearly in private Palestinian ownership.  In 2009 the Civil Administration decided to return the land to its owners because it was no longer needed for security purposes, but settlers seized it and prevented its return.  Since then, M. fears to access his olive groves there.

M. understands the government can close the road for security reasons.  But in the present case what happened had no connection to Nabi Salah.  The settlers used the opportunity to take land whose expropriation had been planned years ago, to connect Halamish with Nahlieli.  It was known they intended to seize the land and were only waiting for the right moment.  It arrived the Saturday night following the murders in the settlement.  They went to the road and blocked the way from Nabi Salah to Deir Nizam and to Bitilu.

The villagers are fighting the theft of their land in court with the help of an attorney from Yesh Din.  They try to avoid confrontations with the army.  That’s one of the reasons they stopped the demonstrations.