The Maqams on which we reported on as being inaccessible for Palestinians since the beginning of the eighties of the last century (when the settlements Elon More, Berakha and Yitzhar in the Nablus district or Mevo Horon in the Ramallah district were founded) didn’t allow for an assessment of the actual loss for the Palestinian communities, without a comparison group with the opposite: Maquams in which there is an activity in the present.

In the course of the shifts during which we dealt with the abundance of wrongs on which we reported here, this item too wasn’t forgotten: we collected data. As a rule the data pointed at the weakening of the religious element, up to its disappearance in favor of the social communal element. Yesterday we even saw for the first time two modest swimming pools (for children and grownups) in the area of the Sheih Huas Maqam with the two brown domes at Deir Ghassane​. (About the two other double domed  Maqams in the village and another similar one at “Atara” we shall report further on).

In the past the Maqams, which also served as substitutes for mosques in villages and small communities lacking a mosque – then had a popular character and even had a connection to agriculture. And not only as a place for prayers for rain, but also for the storage of work utensils and crops which were secured from thefts, for instance, by force of the authority of the saint on whose name the Maqam was called. The era of pre occupation innocence and global internet has changed. In the villages as well. The religious activity in the villages is today concentrated in the mosques which are tightly connected with El Aqsa, which does of course symbolize the national unity of the Palestinians. For about every thousand people in a village there is a mosque where many people pray, even five times a day.

The assembly of more than 10 people is forbidden in the occupied Left Bank because of the suspicion that it would mean a political organization, excluding prayer and listening to the Sheih in the mosque. Is this perhaps the reason why the Friday demonstrations at the Left Bank are begun by kneeling and prayer? And also apart from weddings and popular festivities for which the common area of the Maqam on the hill with the wonderful view is  a perfect setting. Even the event of funerals threatens the occupier, and this is the reason for the draconic conditions for the return of the bodies of freedom fighters who use violent opposition: at night and with a very limited number of participants.

Where then will the Palestinians gather for their family and civil pleasures without being suspected as conspirators? Nothing is more suitable than the leisure area of the Maqam, with its gardens and leisure installations that surround it?

That is the reason that being forced to forego the Maqams and their surroundings which were confiscated from the Palestinians in the Nablus area, is a great loss. If we consider also children and youth, it is a loss that has to be considered together with the other known occupation wrongs such as the expulsion from land and water. All the more so as the Maqam’s site encompasses all the three elements: land, water and a holy site. The traditional culture in a Palestinian village includes the harmonious combination of culture with nature and landscape. The hill with the Maqam, around which there is an oak grove or holy pistacias which characterized this rural space, together with the springs that flow from the hill, are the culture and history of the Palestinian people. For instance each spring has a name, and this name also served as a separator and marker between plots and owners. The land of the Maqams is Waqf land (the Moslem sacred property). Therefore even according to the illegal law which sixty honorable Knesset members voted for – the Jews cannot say “and this too is ours” (Orly Noy in “Local Conversation”).

The village of Deir Rsa’ana was one of the 24 “throne villages” of the Ottoman period. There is an abundance of multi-domed buildings renovated by “Rivak”. On the other hand  the Sheikh Havas Maqam, the ponds, the furniture and the renovation of the site were done by “Rosanna”. The difference in perception and in the result is enormous. The Rivak product is highly cultured (knows all the building techniques and the materials that were collected in buildings and reconstructs with utmost attention and consideration) while that of Rosanna is popular and efficient but to my taste not in the good sense but in some constructor sense. A pity. All this wonderful game between culture and nature which so characterizes the Maqam site, has evaporated. (when we asked  from the general director of Rosanna for a tour (at the meeting at Nabi Salah) with a special request to meet somebody from Rivak we didn’t know that there may perhaps be a problem there…)

The other Maqam is: Sheih 'Asfur which is also renovated in the same manner and includes an area for swings etc. In my opinion the nicest of the three is just the one that wasn’t renovated at all, and in whose yard lives a donkey whose owner stores its food in a cave near the Maqam. The name of the Maqam is Sheikh el Hilwe.

The impressive double domed Maqam, known by the name of Sheih Qatruani, at the bottom of the village of Atara, was also renovated and is active mainly as a festivities and events site including all the equipment and the buildings needed for the wellbeing of the villagers – including children and old people.

These examples from the Ramallah area demonstrate that although the importance of the Maqam as a holy praying site has diminished, its importance as a civilian public, family, community area. When we came to fight together with the Palestinians for the accessibility of the Maqams confined in the Nablus zone , the information we gathered about the active Maqams in the Ramallah area proved very important.

In order to sum this mini investigation up I’d like to point out that the disputed Maqams such as the two at Awarta and the two at Kifel Harith, in which the religious\national contest goes on vehemently (as in the Tomb of Rahel, Samuel, Joseph, Moses etc.) – there is seems that the very national battle enhances the religious one and vice versa. Just to think about the hundreds of years during which the Palestinians so nobly and with such love watched over these sacred places for the three monotheistic religions makes one shudder. These tombs were targets for pilgrimages for Christians and Jews who reported in fascinating detail on these places. Their descriptions enhanced orientalism hundreds of years before it was discovered as a colonialistic component in the 19th century.

In Addition: Confiscation at Deir Balut and the Disruption of the means of approach of the owner of the Antiquities Site “Deir Sm’an” to his Property

Before we reached Dir R’Sa’ana we again met at Deir Ballut with A. a landowner at Deir Kal’a who was requested to relinquish 12 dunams of his land, seemingly for the sake of another approach road to the new Leshem. We photographed the plot he was requested to relinquish and received more documents in order to better understand what one could do and especially in the hope that it would be established that the very building of Leshem isn’t legal and that one could request that it be stopped.

In two previous reports we mentioned the antiquities site “Deir Sam’an” which is confined between two Leshem suburbs. This time we met in the village A-Dik the owner of the plot. P’ is a lecturer in political science in a few colleges. His father dies while cultivating his land at Deir Sam’an, at the age of 56. With the beginning of the building at Leshem his agricultural road to his land was cut off. Today he is required to present an ID card to the guard around the building site and the antiquities.Tonmorrow, when the owners of the houses at being built at Leshem sill enter their houses, what will happen to his right to enter the antiquities site in which his own olive trees are included? 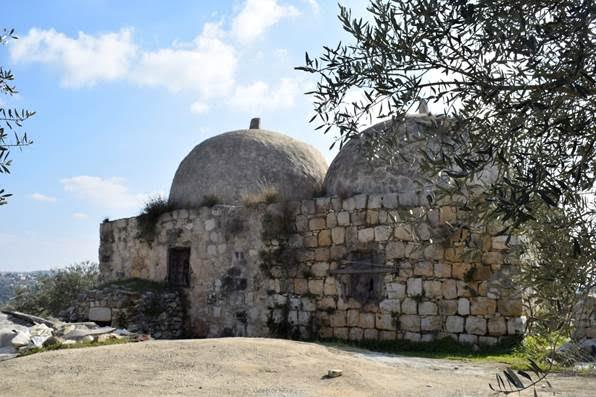 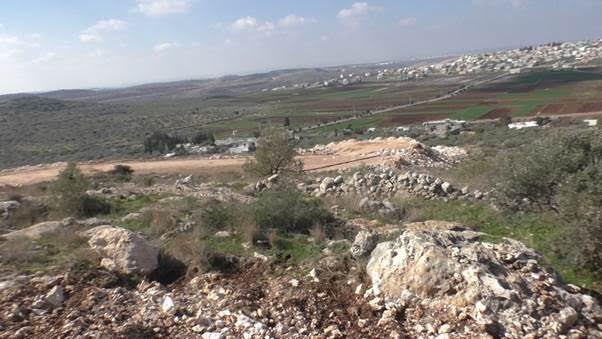 The preparation of a new building site for the new Leshem. In a straight line one can see the houses of the Deir Ballut suburb which is reported on in the report.