You have a cloak you shall be our leader ( Isaiah 3.6) | Machsomwatch
Skip to main content

You have a cloak you shall be our leader ( Isaiah 3.6)

Where o’ where are those girls
With their ponytails and pinafores
Their hoes and sickles
Why do we no longer see them...
They conceal a parabellum
Hand grenades for firing time
(Y. Gamzu) 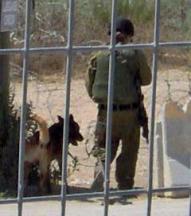 The Zionist movement which in its beginnings was influenced by ideas sweeping Europe at the end of the 19th century, engraved on its flag equality between classes and genders. While World War I caused ideological change in the women’s movements of Europe, which directed their activities to fostering world peace while linking it to the feminist struggle, the the campaign of the women in the Land of Israel (before creation of the State and afterwards) focused on the demand to integrate them in the ostensibly “male” professions, and especially in the military. With time the struggle to integrate women in the fighting echelon became in itself a fight in a media campaign and in the courts.
The establishment, which at first objected to the demands on the grounds of biological inequalities between the sexes, learnt to harness this popular trend to its own objectives. If in the early days of the State the army remained loyal to its self definition as the Israel Defence Forces, since the Six Day War most of the activity is in the Occupied Territories and in contact with their residents. In a large proportion of the friction points with the occupied population of the West Bank, female soldiers are presently stationed, and they serve at almost all levels. Combat means, control and suppression of the Palestinians, also include the dog minders of “Sting” Unit, in which the women soldiers take pride of place, both as trainers and as controllers of the dogs that sniff in every nook and cranny, in the Palestinians’ belongings, around and inside their cars, in the hunt for explosives and weapons. This activity is no respecter of the religious sensitivities of moslems, who view dogs as unclean. The Sting Unit is deployed at checkpoints within the West Bank and on the Seam Line.

From reports:
1.  The woman dog minder puts the animal into a taxi. Its passengers who have already undergone a check now stand on the verge of the road and watch their belongings, lying on the roadway, and the dog which in their view is dirtying their property and the interior of the taxi. They complain to us, in pain and anger. The full report is here.

2. ...a small white vehicle, apparently well-kept. Here too the driver is middle aged. The dog is outside, inside, under, on top. Encouraged by the cry of the minder, for ten minutes sniffs and scratches, for what? Perhaps for the shame that got lost. The full report is here.

Many female soldiers that meet Palestinians face to face and those who hide behind booming loudspeakers, act vulgarly, violently and degradingly. They persist in relating to the transients subjected to their authority without respect, neither for age nor for culture. Sometimes it seems that they want to prove they are “more men than the men”...
The pinafore has been replaced by uniform, the parabellum by more sophisticated weapons for fighting enemies “who rise against us to overcome,” who are the population of the occupied West Bank under an emergency regime and its laws, in areas defined as temporarily held, but where temporary has become eternal.

3.  At crossing 2 acouple of young women Military Police are sitting and making many demands: one at a time – one at a time – that’s normal, but when they pass one at a time and the policewomen are chatting, three men suddenly appear. “How did you pass if we said one at a time?” they shout, “yalla, go back.”

4.  ...today the voice of the Military Police woman roared out of the loudspeaker: “Yalla, come on now, faster, What don’t you understand? How long do I have to wait for you? Ta’al – come already!!!” The full report is here.

5.  ...Military Policewoman explains with endless patience and in an ordinary voice to a Palestinian. “So take it and go. Yalla...” The full report is here.

Sometimes the vocal violence moves up a step. The fact that a soldier – male or female – holds a rifle facing helpless people subject to their authority can result in a power euphoria.

6.  ...I commented to a female soldier about the shouts and derision aimed at Palestinians, and then, but for the reinforced glass, she and her colleagues would certainly have assaulted me physically. And, what’s worse, they shouted: “These are Palestinians, not men, they are stupid. Because of them we are here 12 hours each shift. They should say thanks that we let them live in Israel. Not our problem that they don’t know Hebrew. They should learn!”
We received our punishment when they locked the last turnstile in front of us for a number of minutes. And by the way they punished the Palestinians behind us. The full report is here.

7.   ...the woman soldier shouts into the loudspeaker: “Move back,” but the woman doesn’t understand Hebrew. A woman said that a group of deaf people passed here. The woman soldier screamed at them. The woman tried to explain to her that they couldn’t hear. An old woman wanted to put her hand on the machine. The soldier shouted at her time and again but the old woman didn’t understand what was wanted of her..
Meanwhile the tension and nervousness grew and infected the male and female soldiers. They were obviously confused, opening the turnstile each time for one person, checking and ensuring a pause between one transient and the next.

It’s usual to expect a more human, soft and considerate attitude from a woman than from a man. But that theory doesn’t pass the test of reality at the checkpoint. It seems that the female soldiers, young women, fear being thought goodhearted or considerate, and occasionally there are among them some who make an effort to rise above their male comrades in proving by their vulgarity that they deserve to be classified as fighters.

8.   ...and there is crude language, particularly of one woman soldier “She uses a word I won’t repeat...”When I press, trying to understand what word, he mutters with embarassment: “Slut...”

9.   ...after a few minutes facing the female soldiers in the “acquarium,” the two were sent back and not allowed to pass even though they were holding blue identity cards that had been checked. One of the women was very upset after waiting an hour in the burning June sun, first in the north hut and afterwards in the sleeve

. The soldier’s attitude caused her terrible frustration and she couldn’t hold back her tears.

10.   ...the blue capped military policewomen treat the checkpoint like their home. They cross the vehicle lanes paying no attention to moving traffic, stand in front of cars and prevent their movement, hold out id cards to drivers then pull them back as they reach for them, just for the fun of it. The soldier with drawn and cocked weapon pointing at the driver’s head completes the shameful picture. The full report is here.

11.   “...the worst women soldiers, the male soldiers are better,” he said and related that a few days ago a woman wouldn’t let him pass, adding to the refusal a reverberating and insulting sentence: “Go to God. Only he will renew your permit.” The full report is here.

On the price of “equality’” from an article discussing gender in army service:

There is ambivalent attitude to “femininity” and “masculinity” among both men and women: women fighters are seen by the men as exceptional, worthy of prestige because of their uniqueness in the service on the one hand, but conversely they get a message that they are prohibited from behaving as women. While on their side they formulate for themselves an identity of combat soldier, and adapt to themselves the male behaviour and thought pattern. Thus is created a fuzzy sex identity – already not a woman but never a man. – Giora Inbar, 2005. (“You have a cloak, you shall be our leader” a sex identity and self conception of women and men in the IDF).
Realization of the dream of equated military service, fulfilling roles shoulder to shoulder with soldiers/men, seem to be the satisfying of the ambitions of many of the enlisting women. Perhaps this has become an accepted social norm in materialization of the feminist vision Israeli style.