We drove to Hebron.

Everything along the way seemed normal.  Except for posters on every concrete barrier and every bus stop:  “Time for sovereignty.” Sham’a’s new neighborhood rises gloriously.

All the entrances to Hebron are open.  The roadblocks have been removed. Based on the activity we see at the base at the entrance to Kiryat Arba, the shifts are changing.  Giv’ati are leaving, we’ll see who replaces them. The Hazon David synagogue has been rebuilt.  It’s now in a large white tent on which is written:  “Hazon David synagogue – bravely and courageously onward.” Now it’s being guarded by soldiers. 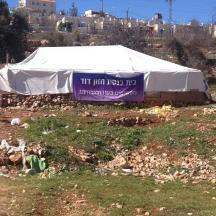 Not far from there, on the Tzion route near the auto repair shops, there’s a new roadblock – concrete barriers and an emplacement that’s manned sometimes.  Why?  Because.

At his shop opposite the Cave of the Patriarchs, ‘Abed tries to demonstrate business as usual, with the usual many guests as well as tourists.

We went to a house the settlers claimed they’d purchased. We’d visited it ten months ago and heard how difficult it was for the family living adjacent to the Cave of the Patriarchs. They’re not home today. A new booth next to it, with soldiers, on guard. Piles of garbage, remnants of food and broken items left after the big raid. Opposite this house, all the shops that had been renovated and opened during Ramadan by order of the GOC are now shut.  We met someone who lives there and is now unemployed.  He says that suddenly, three months ago, they were ordered to close everything.  The army stopped providing security, nobody would explain what was going on, female settlers entered the supermarket he’d opened, attacked him and demanded he leave.  He now understands it was linked to the raid. He sent me photos of a riot by settlers three days ago.  He says there’s continuing agitation and constant incursion attempts. He shows me his small daughters.  He says that one, aged two and a half, was injured by tear gas and went to the hospital five times in the past few days because she had difficulty breathing.

Turkish tourists walking around.  TIPH personnel are also present.  Observing but doing nothing, as usual. There’s also a group of them at the stairs down from the Cordova school, alongside settlers and soldiers, all inspecting those descending the stairs.  They’re only the pupils and teachers, or perhaps local residents not permitted to be there.  Because it’s directly opposite Beit Hadassah and it’s a totally apartheid road. Soldiers on the road up to Tel Rumeida want to be sure I’m alright and don’t need assistance… 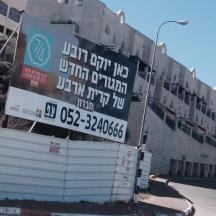 On the way back we see the notorious Anat Cohen driving along Shuhada Street.  She passes by, recognizes our car and returns in reverse.  Poisonously hisses to M., our driver, “Nu, Ibrahim, do you have the knife?”  And continues:  “Have you all brought knives?” Suddenly she sees me beside him.  I’m silent, looking at her, and then the flood of “pearls” bursts from her mouth and she leaves.  So much hatred and brutal racism comes from that woman…

At the first hitchhiking station at the exit from Kiryat Arba is a large sign:  “The new neighborhood of Hebron’s Kiryat Arba will be built here.” In fact, we see construction starting.

We returned via Highway 317.

All the settlements – Carmel, Ma’on, Susya – are undergoing expansion, with new neighborhoods.