After I prevailed over the interrogation by the soldier behind the bullet-proof glass window and refused to answer personal questions, and refused to give him my ID and he became angry, very angry, and imprisoned me for a few minutes in the concrete cell adjoining the emplacement, and spoke about me on the telephone – true, the redeemer didn’t come to Zion, but I was allowed to go through the checkpoint and managed to arrive on time to see two ambulances conduct the back-to-back procedure, how a young woman, a resident of Gaza, in her 23rd week of pregnancy, who was sent for treatment and observation to a hospital in Nablus because of a very large rise in her blood pressure which the physicians in Gaza weren’t able to stabilize, and who, to protect her health and that of her fetus, requires complete bed rest, has been harried since the morning among three ambulances and at least four stretchers. 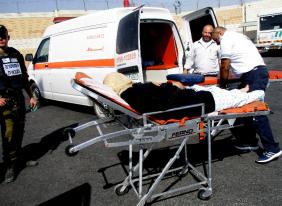 Mohammad Abu-Latifa was murdered by soldiers’ bullets.  He was 18. 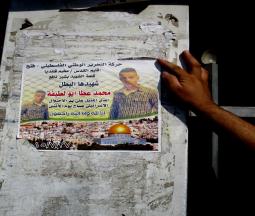 The army’s version blames the victim.

An investigation by “Sihah Mekomit” reveals a different picture of the events leading to Mohammad’s death in the Qalandiya refugee camp on the morning of July 24 that contradicts that version:

And what I heard from one of Mohammad’s relatives:

One day we’ll meet the soldier who killed Mohammad.”

Tomorrow, Monday, all the children will go to school.

Jibril (on the right) will go, Yazzen (above) will go, Muthasem (the youngest child, bottom) will also go and even ‘Abdullah (on the left) who didn’t go last year because his father had no money and wanted ‘Abdullah to work also in the morning, he’ll go to school tomorrow as well.

Muthasem asked me to come visit him in his school in Azariyya (a boarding school/orphanage).  “When I get a chance,” I said. 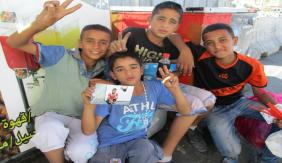