The village of Qaddum has about 4,000 inhabitants. Its existence is officially recorded as early as 1596. In 1975, a Jewish settlement named Kedumim was founded next to the village. This settlement is considered special – Wikipedia describes it as the first Jewish settlement founded in Samaria (the northern part of the West Bank) following the Six Day War… Kedumim also has a population of about 4,000.

From Wikipedia: "… In 2003 the IDF blocked the road leading from the village to the city of Nablus, in favor of the Kedumim settlement's expansion. Due to this blocking, the way traveled from the village to Nablus was increased by about 14 kilometers. Since July 2011 weekly protest demonstrations are held in the village, demanding to open the road…"

Israelis, both settlers and passers-by, are subject to Israeli law. The local Palestinians are governed by martial law. Obviously, people under martial law such as the villagers of Qaddum are not allowed to congregate, and certainly not in protest. I continue the Wikipedia quote: "… the protest demonstrations march from the village center towards Kedumim and the army uses teargas, the "Skunk" and dogs to disperse the demonstrators."

So we met around 12:15 at the Rosh Ha'ayin Train Stations's parking lot and Nadim drove us to Qaddum. We entered the village around 1 p.m.and saw lively traffic of boys and children exiting the mosque after Friday prayers, descending towards the village center. We climbed the road until we reached the demonstration area.

Rather than a demonstration, this is actually a show of presence, silent and painful. The air is charged. As in most Palestinian villages, the alleys are narrow and winding, and stone walls divide the house yards. The locals congregate in groups. They protest the blocking of the main road connecting them to the main road (Road no. 55), leading to Nablus. All so they would not pass through Kedumim. As a result they must make a 14-km long detour in winding hilly tracks. And all because the Kedumim settlers do not see fit to have Qaddum's Palestinians move through their settlement. The participants also stand there because they are not allowed to demonstrate their protest.

Facing them and beyond the curve, IDF soldiers lie in wait in their dark uniforms, helmets, field optic equipment etc. The "Skiunk" vehicle (especially devised to blast protestors with an unbearably foul-smelling liquid that sticks to their clothes and person) is at the ready, everything is set to go. The air vibrates. Who will attack first? Even from afar, on the bare hill rising above Qaddum, soldiers stand watch in their dark uniforms, threatening, armed, at the ready. We are told that they have been positioned there since 10 a.m.

We join the villagers. The "Skunk" has already ejaculated some stench-jets that slowly dribble down the road, scattered with stones and rocks. At the front line stand two elderly men, wearing their "Sunday best", and pants tucked into their socks, waving Palestinian flags. Behind them and near the wall of one of the houses, press photographers kneel with their tripods, wearing bullet-proof vests. Here and there children hold mirror-fragments and try to 'blind' the distant soldiers. Other children bravely attempt to throw stones with improvised slingshots, that land far from the armed soldiers lying in ambush. Groups of men, their faces severe, most of them no longer young, group and wait. Some are armed with gas masks that can be bought at hardware stores in Israel. Three 6-7 year olds run around the men in red-and-blue Superman costumes.

We are happy to meet our friend S., who tells us that this week the army invaded four homes in the village for no reason, destroying their contents and beating up one of their inhabitants. Photos may be seen on his Facebook page. S. also introduces to us a fellow villager, a handsome man wearing an elegant jacket, who tells us that only yesterday he underwent a cardiac procedure, but has felt he must show up for the demonstration today.

We meet several other villagers who are senior officials in the PA police force, all elderly and respectable men, who understand and speak Hebrew. They all stand there in person to express their silent protest. 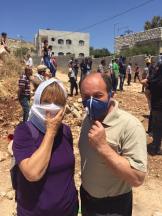 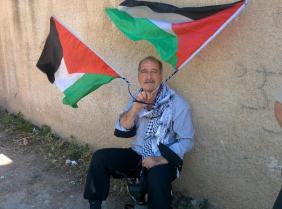 Behind us, down the street, a PA ambulance is parked.

Suddenly, as if out of nowhere, from behind the curve where the soldiers have been taking shelter, a military vehicle appears with a huge Israeli flag. Within seconds, teargas canisters are fired. We run backwards, hopping among stones and rocks. The sky, the air, the street, the horizon, all fill up with thick white smoke. I don't have time to pull my scarf over my face, the teargas suffocates me. It scorches eyes and throats. An young American, a peace volunteer, trips and falls, hurting his hands. We all take shelter behind a stone wall curving nearby. Breathing burns. Slowly the smoke disperses. The wind blows it away from us today, which is good.

The flag-bearing vehicle disappears and after it, all of a sudden, the soldiers as well. Rumor has it that the soldiers are flanking the village on the other side, behind the houses. We run there, but the soldiers disappear. The army's idea is to crowd the villagers back as far as they can into the village, distancing them into Qaddum and away from Kedumim. No, the army is not afraid of Palestinians charging into the settlement. It knows that at the end of every demonstration, youngsters set tires afire. The guys in Kedumim don't like the stench of burning tires. It makes their laundry – hanging to dry in the fresh air – stink. 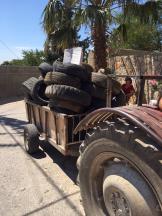 After 2:30 p.m., the tractor that carries a platform filled with tires climbs close to the front line, hides next to the wall of one of the houses and waits for the right moment to jump out, unload the tires and set them on fire.

We take our leave, board Nadim's car and head back home. Another uneventful Friday for the villagers of Qaddum.

And an ironic punch to conclude: Qaddum… Kedumim… Us… You… Who was here first… who has the longer name…

(The root of both words in Hebrew and Arabic actually denotes "being early", "being there first"…)

So this is not what you thought: legend has it that qaddum is in fact a sharp stone, a utensil of sorts which served Abraham to circumcise himself at the very spot where this village stands today. Circumcised himself and passed out.

The village of Qaddum dates back approximately 4,000 years. Today’s villagers mostly work in agriculture and  cultivae olive groves.  The hilly landscape is covered with olive trees and are dotted with patches of green fields.

The settlement of Kedumim was founded in 1975 on lands belonging to the ancient the village of Qaddum.  Since then, Kedumim has expanded to include 5 settlements. The Kedumim settlements separate Qaddum village from its lands and from access to the main road. The road connecting Qaddum village to Route 55 was closed to its residents in 2003. The short ride (1.5 km or less than a mile) between Qaddum and a neighboring village - Jit, turned into a 12 km (7.5 miles) bumpy ride on an unpaved gravely road. Since 2004, residents of the village of Qaddum have been submitting requests to the authorities to reopen the old road leading to Route 55.

On July 2011, the villagers began holding weekly demonstrations in protest of the road closure

and of the theft of their lands. They march to the edge of the village and there they stop. There is a regular routine to the demonstration which always follows with a confrontation with the army when it enters the village at the end of the blocked road. The army reacts to the demonstrations with sharp weapons, rubber bullets, tear gas and lately also live ammunition.  Villagers are injured and hurt each week and often, dozens are arrested by the army. Young people and children are intimidated by the army when they photos are posted in the village streets.

On 12/7/19 a 10 year old boy was criticaaly wounded after he was shot in the head by live ammunition while standing at the entrance to his home in Qaddum during a demonstration.