Preparations for the “Jewish exception” – Israelis will arrive en-masse to pray at the Cave of the Patriarchs during Passover.

Quiet and green on the way to Hebron.

This year even the arid hills on the edge of the desert are flushed with green.

The wheat fields are dotted with red poppies and daisies.  Flocks of sheep everywhere.  A pastoral illusion.

At the entrance to Kiryat Arba, signs offer apartments for sale, an opportunity that shouldn’t be missed, in Mishkenot Mamre.  Uri Ariel – the excellent minister for the settlers and their supporters. 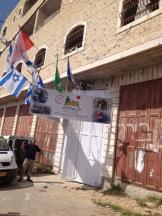 Ofer Ohana “welcomes” us at the entrance to a shop on the ground floor of the building.

A large sign:  A warm welcome for you and your soldiers in Hebron, the city of the Patriarchs, open every day, Beit Hashalom, Kiryat Arba.  That’s apparently how they’ll obtain permission to turn the building into a civilian location, and move people in.

That’s how it will remain a military site, sort of – Israelbluff at its worst.

Ofer, a lovely smile contradicting the words emerging from his lips, “blessings” on traitors, photographs us, I photograph him photographing me, like we always do when we meet, a regular ritual about which, under other circumstances, we could laugh.

Many soldiers getting organized in the parking area across the street, and a crane which brought concrete barriers.

TIPH staffers tell us about the security arrangements in preparation for the intermediate days of Passover, which will be a “Jewish exception,” of course.  An officer from the regional brigade headquarters agreed to talk to me (even though she’d never heard of us).  She said they’re getting ready to prevent what happened last Passover on Highway 35.  I remind her it’s also necessary to prevent an incident like the massacre carried out by Baruch Goldstein.  She grins and says, “Yes, but that happened a long time ago, twenty years ago, I’m talking to you about a recent incident, one year ago…” and turns to go.  Apparently those on tomorrow’s shift will see better what’s planned there.

At the entrance to Shuhadeh Street, at a location where this doesn’t usually occur, Golani soldiers detain two men to inspect IDs.  All the other checkpoints and roadblocks are quiet; we see nothing unusual happening.

We returned on Highway 317.

Rifawiyya, at the foot of the military position overlooking the road to Yatta.  Two months ago, four buildings were demolished.

Given the circumstances, he continues to behave humanely and is open to hear about any problem we raise.

We thanked him for his behavior.  Because of him, this checkpoint operates in a manner that most resembles a normal border crossing.