Nature has been bathed and brightened, the landscape is green, yellow flowers wherever you look.

At the entrance to Sham’a they’re continuing to pave a new road to a new neighborhood whose construction is announced by a large sign.  It’s clear where the funds for building are going.  Not to young couples in Israel.

Starting at the entrance to Kiryat Arba signs hang everywhere praising Lieberman.  Or:  “No more apologizing.”  Or:  “Come together for the Land of Israel, 23 Adar, 14.3 at 20:30 in Rabin Square.”

We went to find out how ‘Abed is, the owner of the shop opposite the Cave of the Patriarchs who was attacked by Baruch Marzel last Wednesday.  Suddenly he receives a phone call from the father of one of the three boys aged 11-12 arrested this morning on their way to the Al-Ibrahamiyya school.  The father is with them at the Hebron police station.  They were detained because they had a fight with settlers’ children.  The settlers’ children are not at the police station, of course.  He needs help.  I telephoned to the Center for the Defense of the Individual.  They’ll contact him immediately.  We telephoned Chana Barg so she could give the details to Yesh Din, who said they’re sending an investigator.  The father was also interrogated by the police, of course.  We went to the school to hear about the incident from the teachers.

The teachers tell us that each morning they arrive at the Pharmacy checkpoint between 07:00-08:00 to see the children and escort them and ensure their journey from the metal detector to school goes peacefully.  The teacher tells us he saw soldiers running and catching the children.  A fourth child who wasn’t detained told him that settlers’ children hit them and ran away and they, who fought back, were taken to the police station [at the time of writing they’re on their way to the DCL.  The father refused to pay a fine and Mohand was told they’d be released].  The teachers also report that Wednesday morning a 14 year old boy also was detained for supposedly throwing stones.  The teacher, who said he didn’t see the incident, ran to the soldier and asked that he be arrested instead so he was also taken to the police station and released after a short time.  The boy was held from 8 in the morning to 5 in the afternoon and released only after his father paid a fine of 1000 shekels.  They showed me a film of the boy and the entire incident on a computer.  We also have a CD that we gave to Hanna Barag.

All along the school’s hallway, on walls usually displaying lesson materials, are photos of soldiers arresting children, inside the school and also in Area H2.

“A glorious legacy,” of that there’s no doubt.  For the younger generation in the city, and also for the Israel Defence Forces. 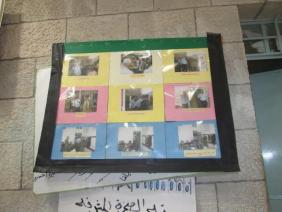 Amira Hass again has a great deal of material with which to write about the arrests of children on the West Bank.

The teachers thank us and send warm regards to Hagit Back.

There was nothing out of the ordinary at all the other checkpoints and roadblocks in the city,  except for the fact that soldiers were stationed at corners they don’t usually man.  An armed soldier is even sitting at the entrance to the gas station.

Natanya reported that also opposite Dahaishe there’s a military vehicle and soldiers on the concrete blocks, and Palestinian cars and trucks are being stopped for inspection at Gush Etzion.

Purim raises the level of concern.

To my colleagues in the southern group:  I think we’ll again have to arrive early at our shifts, between 06:30 – 07:30, to be there when children walk to school.

Hebron, a visit to Araf in the Jaber neighborhood