Meitar crossing – it’s quiet when we go through. 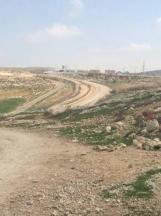 We visit the school in Imnazil which appears clean and well-kept.  The principal tells us about the 14 children from the Abu Kabayta family who go through the checkpoint daily.  They have no problems on the way to school, but on the way back they must undergo a lengthy and tiring inspection.

The school is next to the separation fence below Beit Yattir, which the fence has included in Israel.  The result has been theft of Palestinian land and moving the Green Line northward.

Signs announce construction of a new neighborhood in Beit Yattir.

Settlers have opened a restaurant in Beit Hameriva.  We ran into Ofer Ohana there.  Army and Yehuda battalion flags hang outside.  All their flags hang inside also.  Army-settler symbiosis. 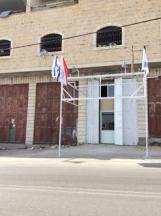 Soldiers have come down from the pillbox above the Chabad cemetery and wander armed among the houses.  They guard the cemetery and ask me whether we’re leading a tour…

Shuhada Street is decorated with Israeli flags, the remnants of the President’s official visit to open the new visitors’ center. 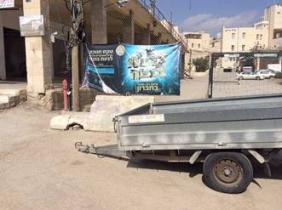 Ashmoret Yitzhak, the Border Police base next to the Giv’at Harsina neighborhood that adjoins the buildings of Kiryat Arba.  (The press reported that the IDF intends to vacate the base, whose land will be used to enlarge Kiryat Arba.)

Two days ago a soldier there shot a Palestinian.   According to the IDF, he tried to grab the soldier’s weapon.

Here’s what the residents told us.  Occasionally Palestinians arrested elsewhere in the city by the Border Police are brought to the base and held until the police take them and they’re brought to the Ofer base for trial.  The Palestinian who was shot arrived at the base at 17:30 in a squad car, handcuffed.  They left him, handcuffed, in the booth at the entrance to the base, and at 20:00 he wanted to go out for a moment and the soldier shot him from about six meters away, maybe less.  The photo shows the width of the road.  And I ask, how could he grab the weapon if he was handcuffed?  The Border Police soldiers on site today all told me, we weren’t here, we don’t know what happened…how unbearably itchy are their trigger fingers.  The wounded Palestinian was taken to the hospital by a military ambulance.

These are the stones thrown on the road next to the worshippers’ route: 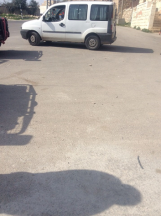 The vehicle in the middle of the road is Ofer’s, who doesn’t stop berating us and speaking extremely rudely.  Nili hasn’t experienced it yet.  I make a huge effort to remain calm and not reply. 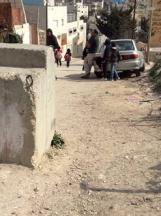 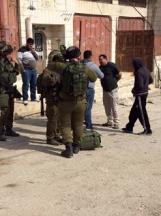