05:40 We arrived at the parking lot where there were three lines of people waiting to move through the shed on the way to the fenced corridors leading to the inspection stations. That’s a sign there’s considerable congestion within. “This is the reason for attacks,” calls one of the men waiting as they let us through to the crossing. Most of the covered area isn’t being used; few people are seated on the benches and there’s a great deal of garbage on the ground. Four inspection stations are open. A woman approaches the closed humanitarian gate, gives up and moves to the regular line. Avital telephones the DCO and the humanitarian office asking them to open additional booths. They tell her the DCO representative with arrive at 06:00. A female soldier emerges from the “cage,” asks who we are, whether she can help us, but she’s unable to open additional booths. There aren’t enough soldiers. She says they’re trying to let people enter in threes instead of one at a time so it will go more quickly. 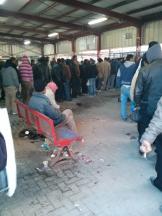 The people on line complain to us about the situation. They ask the soldier to open the revolving gates

so people can advance to the inspection booths. She says she can’t do so yet, but then, a minute later, she allows people through. Whenever she does people rush toward the entrance, pushing. Everyone wants to go through and get to work on time. Some wait at the closed station, hoping it will open. When it doesn’t they move to the others.

06:00 A guard comes out, stands near the humanitarian gate. He says a DCO soldier is supposed to arrive and open it, but he doesn’t. Then a policeman emerges but the gate is still closed. Women, children and others begin forming a line at the humanitarian gate. The crowd outside is restless. Three lines stretch into the parking lot. An additional booth opens a few minutes later and more people are sent through the fenced corridors.

06:10 Individuals arrive from “Blue & White Human Rights” – five young people, including one woman. We spoke with them briefly. They’re training new people, which is why they came in a larger group. They’re young; most of them are students. As you know, they believe in cooperating with the authorities – the army and the police. They write reports which they submit to them. They meet monthly with the DCO. They emphasize they’re in dialogue with the authorities. They’re carrying brochures in Arabic saying they want to insure the Palestinians’ human rights through cooperation with the authorities (the brochure repeats that more than once). There’s a phone number to call. We asked who contacts them, and what they do. The ones who came to the checkpoint don’t really know, but one of them says that most of the calls are from people who have a permit for a specific checkpoint but want to cross through a different one as well - less often with respect to removing a blacklisting and obtaining permits. He doesn’t know how successful they are. 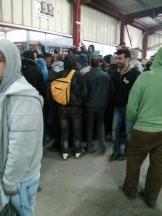 While we’re talking to him there’s unrest in the line. It’s now fully light outside and the line no longer reaches into the parking lot. But whereas people had stood in three more-or-less orderly lines, now there’s a single mass of people trying to enter, pushing and shouting. Young men climb over one another and on the fences trying to enter first whenever there’s an opportunity.

06:20 Now the guard also telephones. The policeman begins checking IDs through the fence and then the soldier finally arrives, opens the humanitarian gate and begins admitting people.

06:25 Shouting and shoving on line. People jam into the fenced corridors like sardines and remain stuck until the revolving gates open and they’re “flowed” through. There’s no longer a line at the humanitarian gate after groups of people were let through in turn, but immediately more people begin waiting - mostly women.

06:35 The disorder eases. There’s no more shoving and shouting, but many still wait to go through. People are let through the humanitarian gate whenever a group of people gathers outside and the inner line to the humanitarian booth shortens.

07:05 The pressure has eased by this time. Laborers have crossed to their jobs and the checkpoint is emptying. We left.

They checked our IDs and the car’s trunk at the vehicle inspection station; we went through with no problem.

Attached are photos of congestion at the checkpoint, the lines inside and outside and the young men climbing the fences.