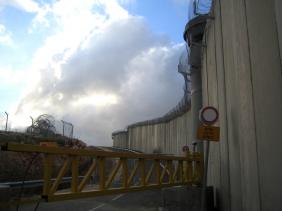 We usually prefer to leave Palestine through the Hizma checkpoint where, unlike elsewhere, there are no lines, we’re not detained, we don’t have to show identification or leave the vehicle to open the trunk and show what’s there – only slow down a little when we reach the soldier, answer “OK” when he asks, pro forma, “What’s up?,” and sometimes not even that, just nod and drive on.

But those who don’t have the “correct” appearance and accent are not treated like us. They, Palestinian residents of East Jerusalem, even though their permanent resident status entitles them to freedom of movement (unlike their compatriots, residents of Palestine), must stop, pull off the road into the parking bay, show identification, get out of the vehicle, open the trunk to the soldiers.

Their right to freedom of movement is relative; they’re subject to the good will and whims of every person in uniform.

A’s story is an example. He returned through the Hizma checkpoint after visiting his family, with his wife, his infant son and an acquaintance who’d said “Do me a favor – I have to go to Jerusalem. Can you give me a ride?” – and they went. A. didn’t investigate the man, didn’t know what color ID he had, nor his address. He simply did someone a favor. But the soldiers at the checkpoint did investigate and discovered that A. had given a ride to someone who isn’t allowed through this checkpoint, which is intended for settlers.

The man was arrested and taken away.

A. was told to turn off the engine, remain in the car, and had to surrender the car keys.

They sat and waited – A., his wife and child. But the baby

, who didn’t yet understand that he had to obey the soldier’s orders, started crying very loudly. Time passed, the crying intensified. But they’re not allowed to leave the car, to remove the baby from the car seat, the mother isn’t allowed to cradle him in her arms. A. tried, got out, wanted to talk to someone, to make a request, but heard “Stay in the car!”, and got back in.

Only after an hour were the keys returned, the woman and baby sent home and A. was taken to the police station where he waited another hour and then was “invited” to return the next day.

Since then he’s been going back and forth to the police station, waiting every day for his name to be called, going into a room where they take the form he was given the previous day and give him a new one which instructs him to return tomorrow, and so on.

And the time, and annoyance, and fear, much less the money it costs him – they’re not relevant, not counted.

Once, when he dared ask why they weren’t taking care of him, the policeman said “I have no time for you; I’ve a lot of work.” “But I’m also your work,” A. replied, but instead of an answer was given a form to replace the one he was given yesterday. Yes, he’ll return tomorrow, and maybe the next day as well.

That’s how those in authority behave, with their unlimited arbitrary power over those whose rights are conditional.