“It’s only a routine inspection” said the soldier guarding the handler training a dog on Palestinian vehicles.

To them it’s routine. Just routine. 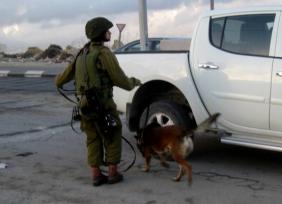 But for someone who was lucky enough to be selected and forced to leave their car, stand off to the side, watch the dog brought in to sniff the tires, walk around the vehicle, jump on it, go into the trunk, into the car, dirty the upholstery, crawl beneath the seats, poke into each crack and crevice and continue until it finds the hidden training bait – for them it’s not routine. It’s humiliating, an invasion of privacy, a desecration of their religious beliefs. Because, for Islam, the dog is unclean.

Nor was it routine for a woman from Gaza released this morning from hospital in Ramallah. According to the long list of conditions she enumerated one by one to her husband, you could characterize her as a “complicated case.” The couple stood there for hours. It’s hard to exit from Gaza, but it’s not easy to return either. The husband was concerned his wife wouldn’t take her medicine in time, was worried they wouldn’t receive a permit before the Erez crossing closed – where would they spend the night? And he also worried about their son hospitalized that morning in Gaza after he lost consciousness – something he told to me, a stranger, not to his wife because he didn’t want to burden her even more. “She’ll find out when we get home,” he said. 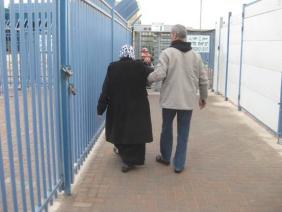 When they were finally able to go through he held his wife by the arm, supporting her, because her legs were swollen, she limped and couldn’t clearly see where she was going. Using the last of her strength she concentrated on lifting one foot, then the other – step by step they both moved forward.

And the man – this isn’t his first time at Qalandiya – looked around. “I won’t come again,” he said very disgustedly. “Even if I have to go all the way to…”, and stopped, searched for a word, found it… ”to Holland!”