Her heart is already burnt.

Calling the settlers’ crimes against Palestinians “Tag Mechir” is misleading.

“Terror” is the only appropriate word to describe the crimes of settlers from Beit El against the residents of the Palestinian neighborhood on whose border the intruders established their fortified locality. 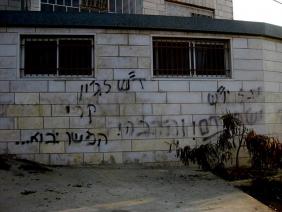 This isn’t only writing on the wall, or on cars set on fire in the middle of the night – it’s the terror and helplessness felt by those who, along with their property, are powerless in the face of the malicious behavior of criminals.

“My heart has already been burned,” said Ayesha, describing the settlers’ repeated harassment, saying she no longer has anywhere to go. “Not to America, not Russia, not China,” because in her old age she, who was born in Al-Abasiyya (on whose ruins Yahud was established), from which she’d been expelled during the nakba, and had grown up here, in Dura al-Qara, as a refugee, gave birth to and raised her ten children here, is seeing her world collapse because she and her family are in danger of being expelled again. But she, Ayesha, isn’t going anywhere, nor does anywhere await this old woman whose heart is already burnt.

And Jamal, a soft-spoken man, told us about his children’s nightmares since they were awaked by that huge fire; he doesn’t know how to calm their fears, how to cure their nightmares. All he can do is add more layers of protection to his home and property, to prepare for the coming pogroms. 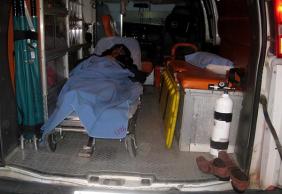 But neither Ayesha nor Jamal believe this was the final attack; they know the rioters won’t be brought to justice this time, as they weren’t before, and certainly won’t be in the future. Ayesha and Jamal, as well as all their compatriots, know their property and even their physical selves are unprotected, at everyone’s mercy, worthless in the eyes of the army and the police and the law who treat people differently according to the nature of the blood flowing in their veins.

On our way back through the Qalandiya checkpoint in the cold evening we saw a dying man being transferred from one stretcher to another, from the ambulance that brought him from Jenin, where he lives, to an ambulance that came from Jerusalem. Because those are the rules of occupation. And rules must be obeyed, even if they violate humane dictates. Only his shoes lying at the ambulance door, bereft of feet, could say something about the man, the path he chose, which path chose him, how far he got.