"They are looking for the man", said a man who just got out of a police trap, not before he received from them a ticket for 250 Shekels after driving on a traffic island.

Only those who drive in the direction of the checkpoint and get trapped inside the bottle's neck where four roads coming from different directions become two lanes that merge with two additional lanes, meaning they become four, and the road becomes one which twists around the roundabout, and it is the rush hour of the end of the working day, know that it is inevitable that at least two wheels will mount the edge of the traffic island so as to merge with this slow progressing madness.

But mounting the traffic island is to mount a separator and mounting a separator is a violation of traffic laws- the policewomen entrapping the drives and hunting down their prey by the wall gave us this new information.

And then it was Unis's turn- a big man with a big laugh, life wisdom, optimism and a love for human beings that can't be understood.

And as part of the assembly line his papers were taken from him and his information was entered into the computer and the policewoman hurried back with her reply: "your license has been revoked" but Unis's license has not been revoked, and a second insertion of his details verified what he said: oh, it wasn't, but is was in the past… " and she didn't get confused and she didn't apologize, she just wrote a traffic report saying: "mounted a separator" and added that she was actually doing Unis a favor, because she could write that he drove over a white line.

Unis told us he lived at Beit Hanina and that he was even teaching his children that a human being is a human being "no matter whether Jewish or Arab", that is because the municipality of Jerusalem didn't take care of the neighborhoods in the east so he would take them to one of the playgrounds at the French Hill, and each time he arrived at one of the playgrounds the police would arrive immediately, within less than ten minutes, and they would ask him, and only him, for his ID.

And to Unis's dismay and in spite his good intentions, the kids are scared of going to those playgrounds where "their father is the only one inspected".

At Jaba checkpoint four male soldiers, one female soldier and a dog were performing the "dog procedure". The last person to be released took his head out of the window and said: "you see how they treat us?"

And the female soldier, who panicked once she noticed the camera

pointing at her and the dog, got the rest of the soldiers in a frenzy. They crossed the road (towards us) in a hurry and yelled and threatened and hide that which the female soldiers calmed that we could take a photo of, and they called for the officer who arrived within minutes and demanded the camera so he could see and delete the picture of the female solider and the dog, but it wasn't handed to him, and he informed us that we were detained until we either delete the pictures or the police arrives. I told him that even though "the pictures didn't come out so good, they were mine and he didn't have the right to touch my property.

And it was dark and cold, and we were detained by the side of the road for (a little over) forty minutes, until the policemen arrived. They seemed confused and didn’t really understand why they were sent there, because they knew as well as we did and as we told the officer, that he had no case. Not for preventing the picture from being taken, not for demanding that we delete the pictures, not for detaining us and not for inconveniencing the police. 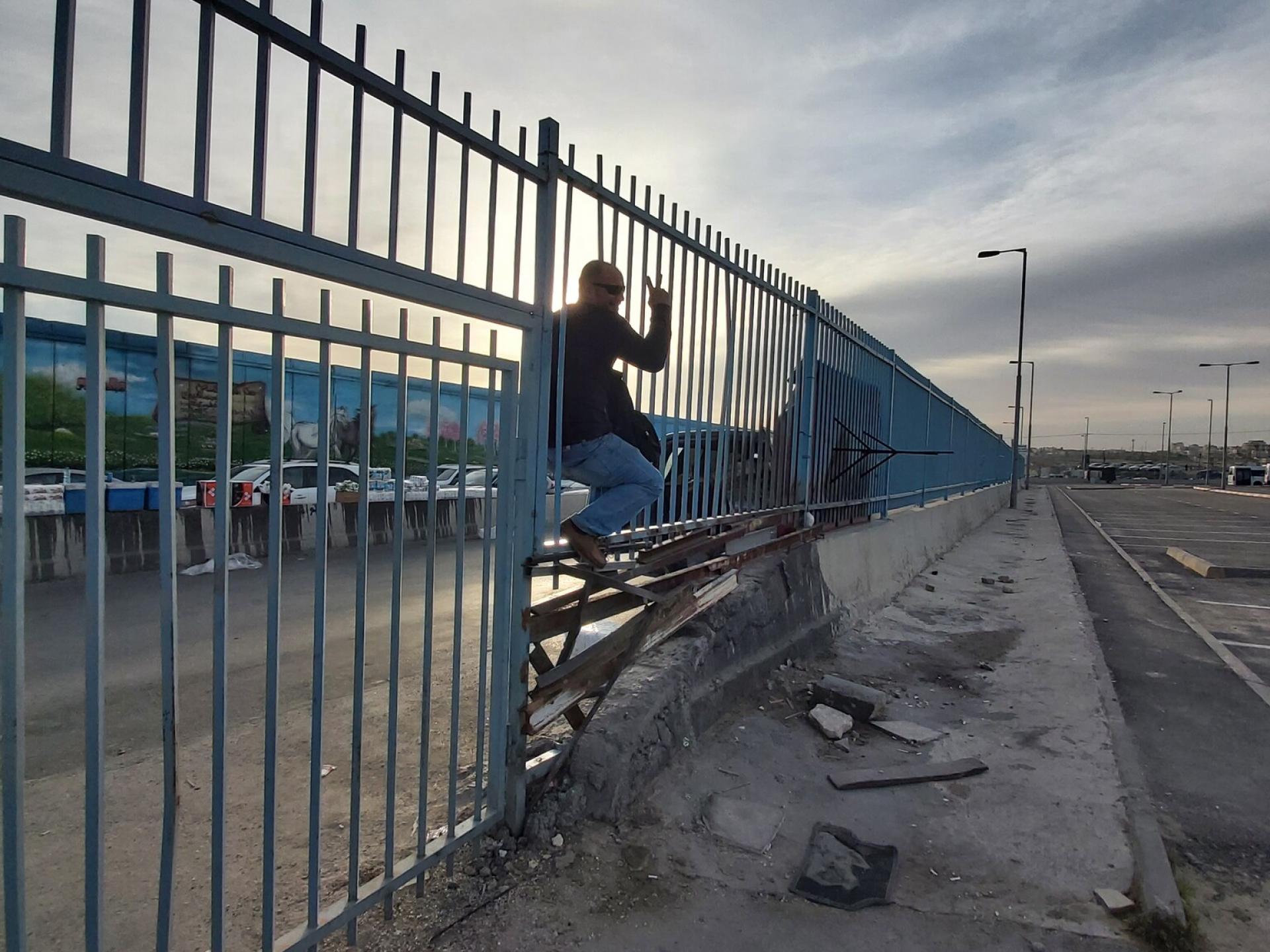 Pass through the fence bars