I see before me a mass of men.  They’re excited, smiling, a look of triumph on their faces.

They gallop like a herd.  They walk fast, some even run.

They’re running toward a structure of pens, like the barn I visited recently, but without the straw (but with the odor).  They grasp the bars, listen to the screams coming over the loudspeaker, a mishmash of incomprehensible words from a barely human, faceless voice.  They wait, and almost all return the way they came.

And I watch, choking back tears.  They stick in my throat.

For the first time I understand what occupation means.

Occupation is when people are so happy to go through one checkpoint, even when they know they won’t be allowed through the next 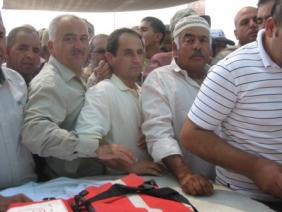 My first time at the Qalandiya checkpoint, together with Vivi, Roni and Tamar from Machsom Watch.

The second Friday of Ramadan.  Special permits, and strange prohibitions.

For example, only people older than 40 and women, accompanied by children under 12 (who must present an original ID, which is usually in poor condition) are allowed through (to reach the Haram al Sharif for the Moslems’ most important holiday).  Vehicles are not permitted to cross; there’s a separate crossing for women.

I’m standing on the soldiers’ side, watching them, one in particular, who seems tense and angry.  She barks aggressively at a Palestinian, stops another and sends him back.  Everything that occurs behind the checkpoint is done hatefully, firmly, in a violently alienated manner.  I think that in order for me to talk that way to a stranger who did nothing to hurt me, I’d have to feel very angry, very hurt.  I wonder what she’s angry about.  I think I’d be angry at being placed in so violent a military setting, a sole woman amidst men, in a setting where any expression of tenderness, compassion, feeling is illegitimate.  With no possibility of rebelling, opposing, saying “What are you doing?!  What are we doing?!.  I won’t be part of this.  I won’t restrict the freedom of movement of people who committed no crime, injured no one, who want only to live in dignity.”

Dear Border Police soldier, my heart goes out to you but I am also angry, disdainful, alienated, pity you.  Yes, all of that.  It’s possible to be a female soldier in the midst of male soldiers and still behave sensitively and humanely.  That’s exactly what’s missing at Qalandiya (Qalandiya as a metaphor for the occupation as a whole).  Sensitivity, dialogue, tenderness, flexibility.  And, at the same time, opposition, rebellion – in order to instill these elements in the discourse and behavior of the male and female soldiers stationed there.  To install a mirror reflecting the ugliness and disgrace of how the occupation treats people 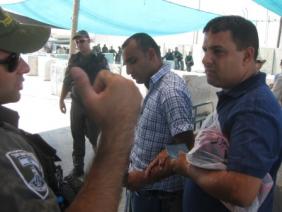 Another Kafkaesque incident:  A blind man who tried to go through the checkpoint in a lane nearer to him, next to the lane for women.  The lane is open, I go back and forth through it freely, but the soldiers refuse to let him pass.  He has to go all the way around to the men’s lane.  The soldiers refuse to accompany him because “It’s their job, not ours.”  But I think “It’s your job.”  Here’s a chance to demonstrate, in a minimal, sorrowful way – but nevertheless – that the IDF can and does behave humanely.  But it refuses.  In principle.

And, as a final chord in the surreal daily reality of the Qalandiya checkpoint. I cross back into Israeli territory without being inspected, without a glance.

After all, we’re not Palestinians; we represent no threat, no danger to the state’s security.