Everybody says that ever since two people were killed there, the CP has become even more difficult than before. M. is standing near the CP and has been waiting for half an hour for the driver of the truck in which he has come; in it is the off-terrain vehicle that he bought a short time ago. He has a receipt from the man who sold it to him, but the soldiers would not let it through. First of all, maybe the it's not really his. Then, even if it is his, it may be forbidden to allow a small tractor, which is a vehicle, into the Valley. "The fact that it is not stolen does not mean that it can go through."

After another half hour, the soldiers send them back to Nablus. The woman soldier takes five women students to an open cell at the side of the CP in order to have them take their coats off. Some look at her defiantly, others are obviously very embarrassed. The soldier is not embarrassed. She orders them to do all sorts of things.

Some people are passing under the magnometer: it whistles, they are made to go back, again and again, until they succeed. Their bags and their documents are inspected; the inside of the cars, the baggage compartments. And if a vehicle advances before the driver was instructed to drive it forward, they are turned back and made to wait for the call.

An acquaintance told us that recently the army has been setting up improvised CPs, sometimes on the Tyasir road. There have been many military exercises in the area in the last month. She also told us that this week on the Tyasir road at noon, she saw a soldier, completely naked, crouchin and relieving himself on the side of the road, while other soldiers stood nearby and laughed. Children were coming back from school at the same time, and saw all of this.

There are several cars in every direction. Every person who goes through has his ID and his bag inspected by one of the soldiers, and then he goes through the turnstile. Behind the turnstile another soldier is waiting and tells him to lift his shirt,  to turn around, to take everything out of his pockets, to lift the trouser legs to show his feet, and to show the insides of his shoes. All the instructions are given in Hebrew, and the soldier gets angry if they do not understand him and he has to repeat himself. He grabs a young fellow and pushes him toward the wall and makes him bend over and kicks him to spread his legs (see picture). Then he touches him roughly and rudely 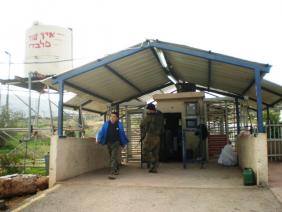 His commander approaches him afterwards and tells him not to touch the people. The soldier does not understand why this is no longer permitted and claims that formerly he (the commander) himself gave different instructions. The commander tells him quietly that now the instructions have changed.

The Palestinians make many mistakes because they do not understand the Hebrew instructions. The soldier says, 'what do you have in your pocket ("kees" in Hebrew)' and means just that. But in Arabic, 'kees' is a bag and the Palestinian lifts his bag asking if that is what he means. Then the soldier barks at him angrily because he has not done what he was asked to do. And the Palestinian is more stressed, and understands even less....

People are waiting for cars at a distance from the CP. The minute the car arrives, the soldier yells at them from afar, telling them to get into the car immediately. If two Palesinians stand near each other, the soldier says, "they are not allowed to stand together."

Because of the pressure, a bag falls apart when somebody pulls it quickly to show it to the soldier. In the meantime, the soldiers talked among themselves about how many cookies each of them has eaten today. It seems that there were not enough cookies for all of them and they accused one another (jokingly) of eating too much.

A driver asks to let one of his passengers join the queue of pedestrians, because he is old. The solier refuses and says --  "only if he is ill."

The soldiers look at the documents. They tell dozens of people to get new documents immediately. Otherwise, tomorrow they will not be allowed to go through. Some of them say that the document they have now is new. The documents are the usual ones, somebody tells them, but this is a new document, I took it out just now.

There are many children, about 9 or 10 years old, going through by themselves (see picture). How does a child feel when he goes through facing a gun?

The soldiers' tap has been dripping for weeks. No one collects the water. Our friends from the encampment would have put a container under the tap to collect the water, because they do not have any. It was taken from them.