The Destruction of Palestinian Subsistence Agriculture 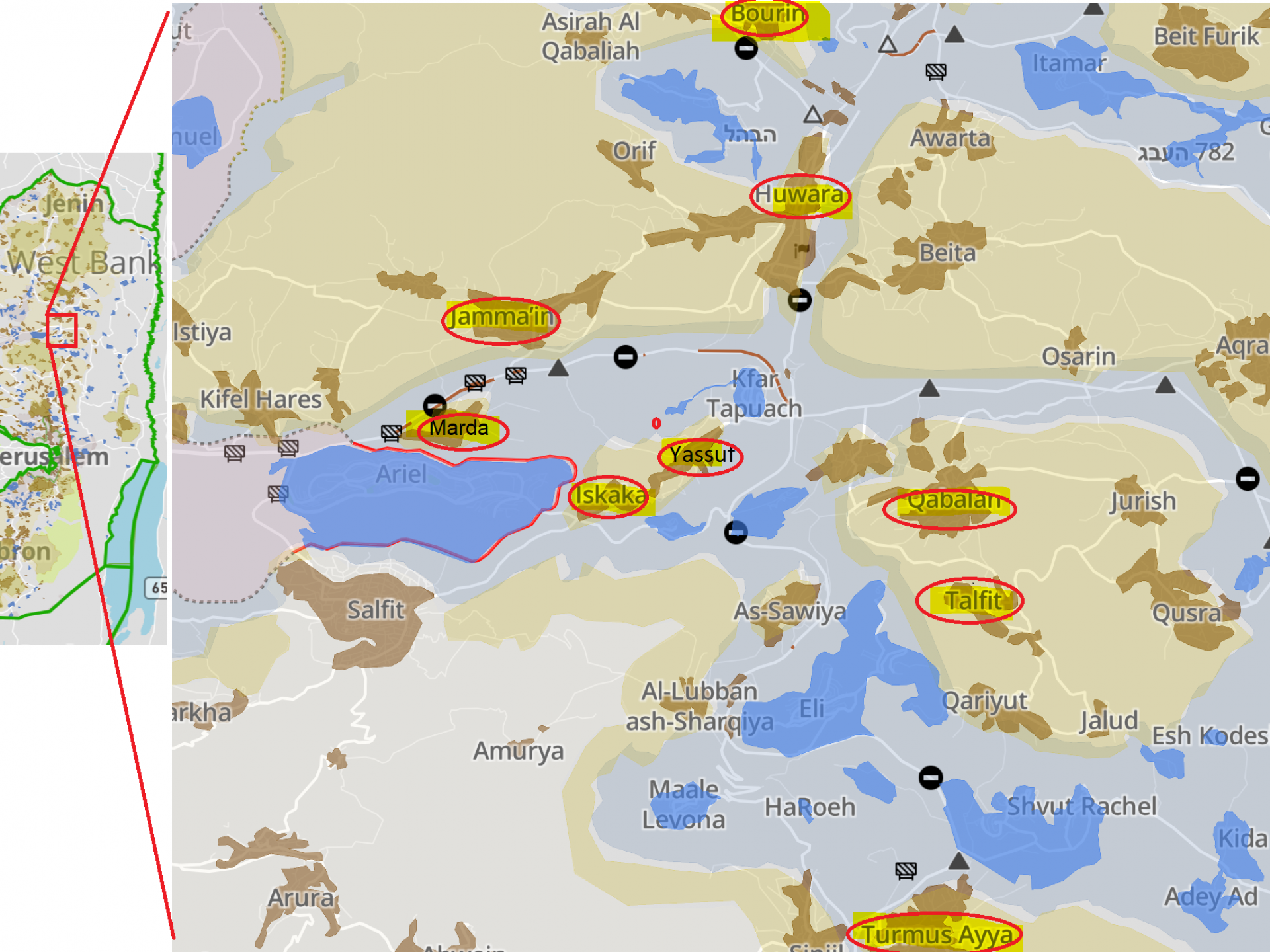 Learn more about the struggles of these West Bank villages

Since 2014, MachsomWatch activists have been visiting villages in the West Bank to understand, and where possible, help solve problems. At first, we visited each municipality every 2 months or after a disturbing event; then, having increased the number of villages we visit from eight to twenty, we now focus on those situated near settlements known to be hostile to Palestinians. The villages we visit differ in several ways.

The issues about which we ask their municipal officials range from their water and electricity supplies, sewage, garbage disposal and dumping, medical services, education, unemployment, the stresses of IDF visits and closures, as well as settler harassment. In this article we will focus on severe water deprivation and settler aggression.

NOTE:  All incidents mentioned in this article appear in reports on the  MachsomWatch website: www.machsomwatch.org

Mekorot National Water Company has been officially in control of the water sources of the occupied Palestinian territories since 1982 and supplies water to settlements and to most Palestinian villages. While settlers and Israelis pay Mekorot 1.80 shekels per cubic meter of water, Palestinians pay 2.50 shekels[1]; and whereas for settlers, the flow of running water[2] is continuous and unrestricted, for Palestinians it is often interrupted and restricted.

Mekorot does not allocate water directly to Palestinian households, but to their municipality, disregarding their religious and seasonal needs, and their population growth. The Palestinian population has increased considerably over the years, but their water allocations are either the same, or even less. And though people wash and drink more in the dry summer months, including the month-long Ramadan fast, there is less water available then than in the winter when, for some people, rainwater fills up their home cisterns.

A few examples show how severely water-deprived villagers are. In the summer of 2016, Iskaka often had running water for only 8 hours every two days; in 2017 Qabalan (population 12,000), only 20 days a month, and Turmus Ayya, even less with 14 days. Those who live uphill — in many villages they are half of the population — fare even worse: they often have no water or hardly any (Qabalan, Huwarra and Zeita Jammain). This happens whenever Mekorot reduces water pressure by partially closing the main valves.

In short, most villagers receive less than 100 liters water per capita per day (Lpcd) which is the World Health Organization (WHO) minimum standard for domestic use (Iskaka 37 Lpcd, Qabalan 57 Lpcd). This means that water cannot be spared for farm animals

or for growing agricultural products. Farmers thus lose potential income from cheese production and the growth and sale of fruit and vegetables. In order to supplement their water needs villagers  have to buy expensive water from mobile water trucks. No wonder then, that for many, olive trees, which survive on rainwater alone, have become the only source of income. Our hosts tell us that their settler neighbours, for whom some villagers work, enjoy flowering gardens and swimming pools.

Settlers who are subsidized by government subsidies, enjoy legal and judicial preferences, and IDF protection. Most live on expropriated Palestinian land, often on a hill overlooking the Palestinian village below and encroaching on some of its more distant lands.  Some settlers seem to be continually eyeing their Palestinian neighbors below, scheming how best to further dispossess and impoverish them.

Regrettably, we note that they certainly deploy strategies which would upset and traumatize most people both physically and emotionally. In Huwarra, a town strategically situated between Nablus and Ramallah, on a hot Friday afternoon during the Ramadan fast, 10 cars carrying 30 settlers arrived, escorted by Border Police vehicles and some Army jeeps. First, their chaperons closed off the main street, stopping the traffic flow; the settlers then sang and danced for 2 hours. The Palestinians wisely decided not to watch the free show nor to react. 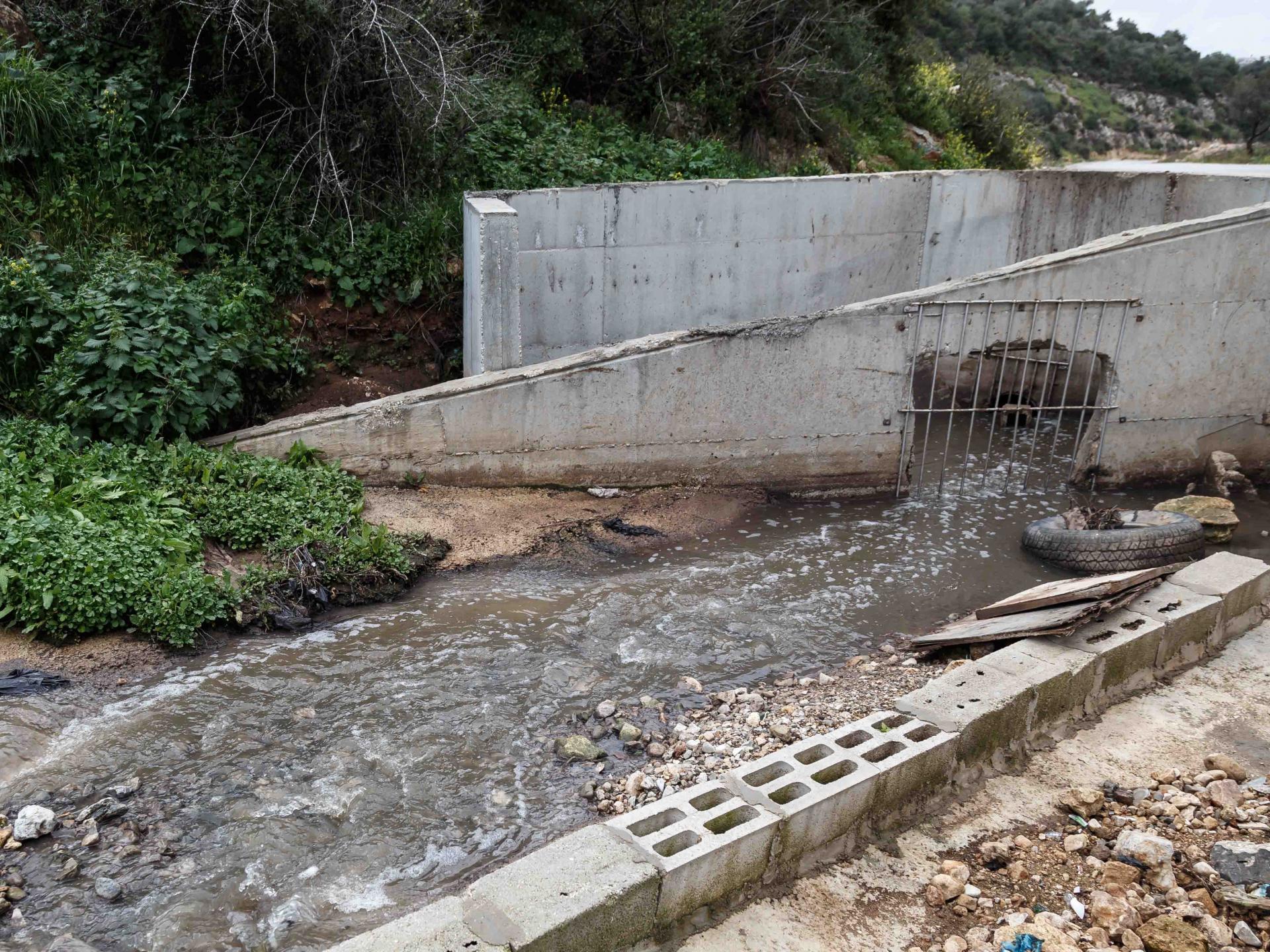 Settlers who live uphill from Marda, a town which is home to a permaculture farm, shamelessly spill their foul-smelling sewage on the village homes below. Others dump their construction debris and garbage in neighboring Palestinian farmlands, thus polluting crops and precious groundwater. While possessing arms is forbidden to Palestinians, many settlers freely use their guns to frighten villagers. During a visit to the Iskaka-Yasuf High School for Girls in 2016, we heard that some settlers used to drive through the main street, past the school, and shooting at random, they  threatened and injured passersby. The next day, after a sleepless night, many girls came to school without their homework and unable to focus on their lessons. Two months ago, violent settlers came down to Huwarra, and beat up farmers at work. Last summer, settlers chased Turmus Ayya shepherds out of their pastureland; some stole their sheep. Many cautious farmers now stay away from lands close to expanding settlements.

Bent on ruining olive harvests, settlers in 2017 burnt 390 olive trees in Burin, engraving their Hebrew names on rocks. One night in Iskaka-- protected by soldiers who closed off the area - settlers cut off 500 trees, destroying the livelihood of four families.

In broad day light in Huwarra, on a recent Saturday, emboldened by Trump’s recognition of Jerusalem as Israel’s capital, hooded men swung on the branches of mature olive tree causing great damage.  Their brazen vandalism continued even while it was being videoed. Recently, after uprooting young olive trees in a Yasuf field, settlers made off with all of them.  Palestinians then planted a new batch; again, the settlers uprooted and stole the trees. This happened three times.

Without regard to land that belongs to Turmos Ayya, settlers brought in a bulldozer and  prepared to pave a road to their settlement. Lastly, on a recent Friday, a day when Palestinians don’t work, a Talfit watchman alerted his fellow-villagers, who stopped two settlers from burning their tractors. These “visitors” told police they were only out for a walk. 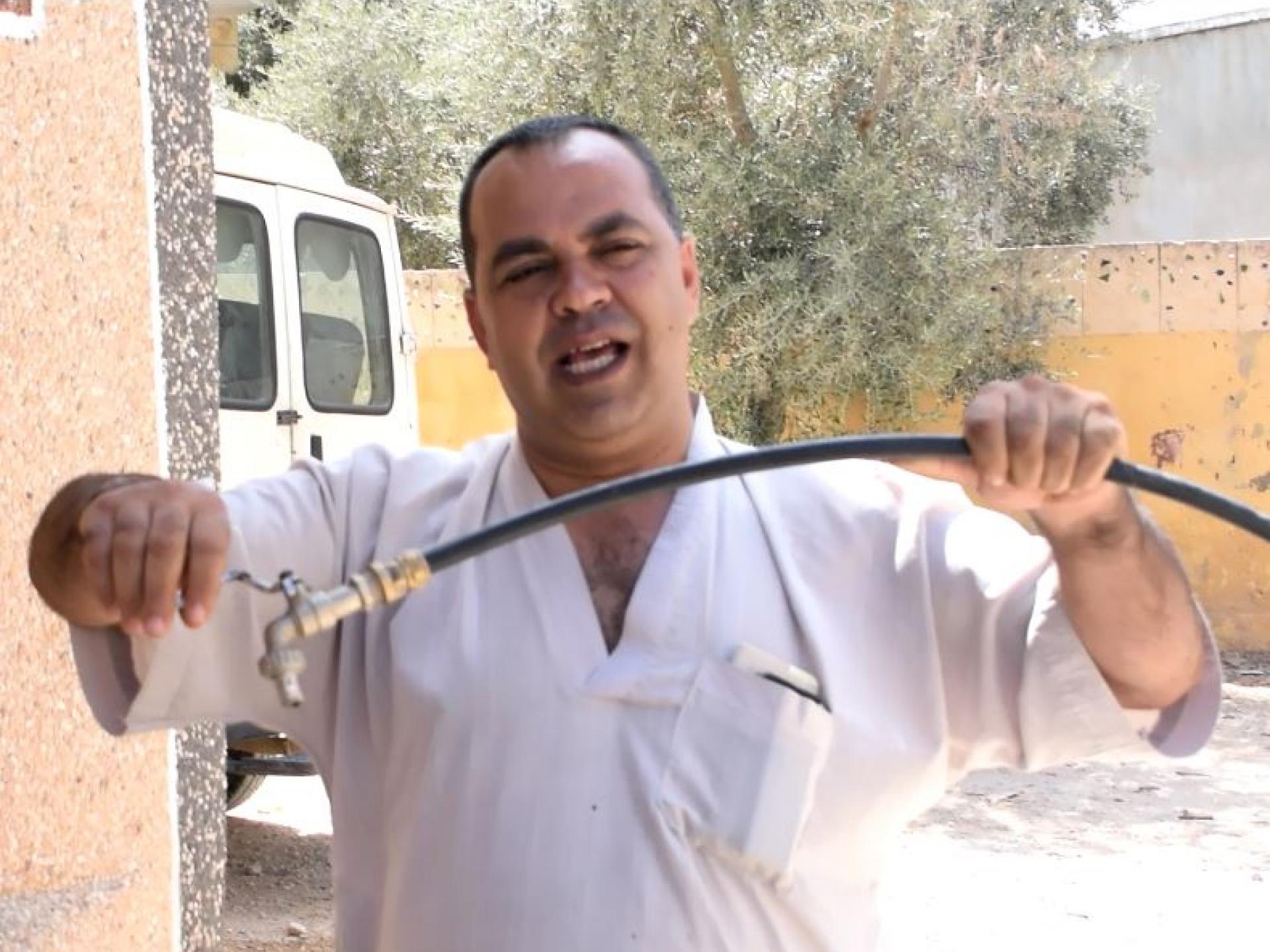 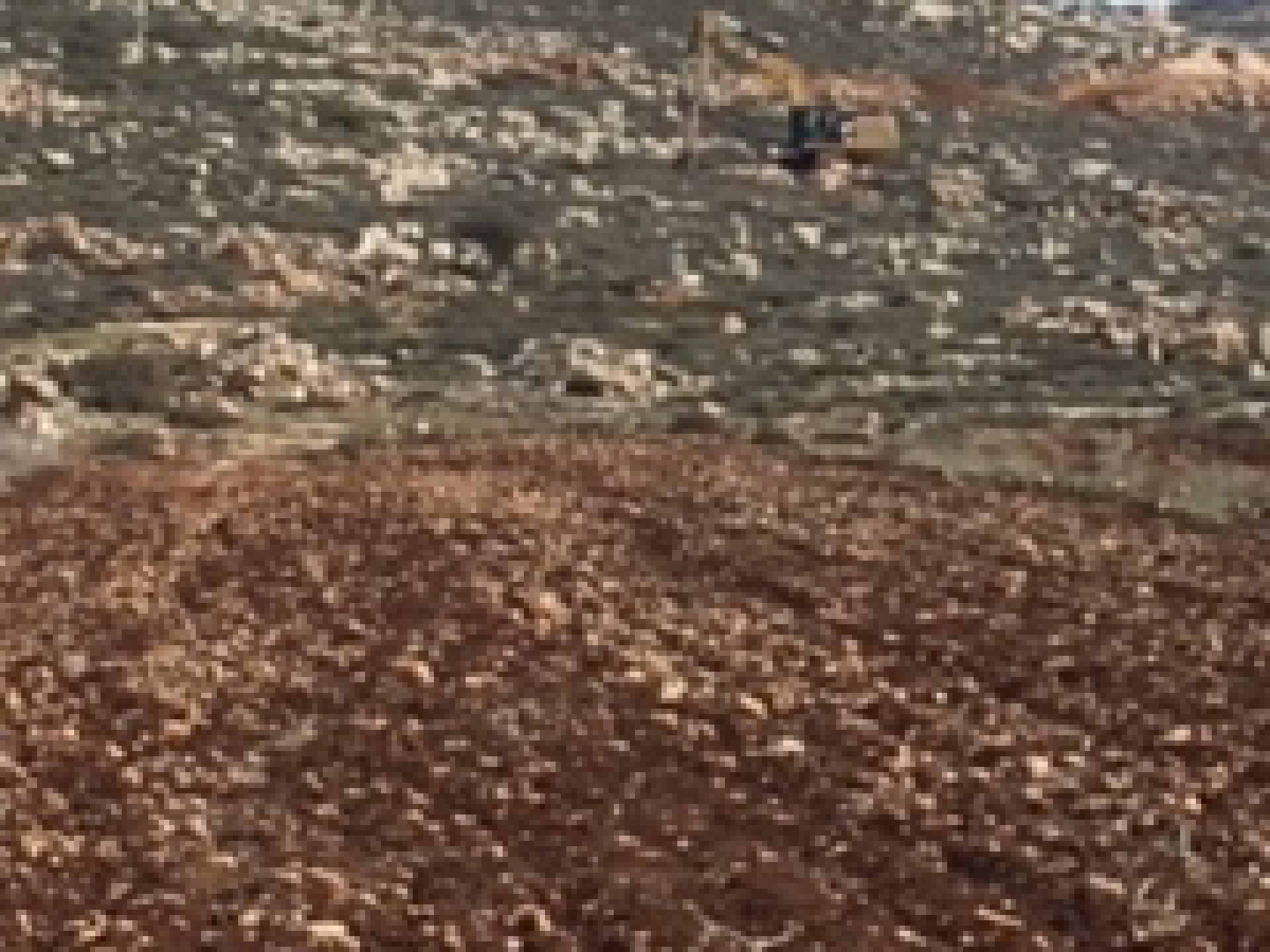 During our visits to the villages, we find it hard to bear the despair caused by the water deprivations (especially in the long summer months) and the constant vandalism imposed by arrogant, fanatic settlers. These actions have impoverished Palestinians and increased their sense of uncertainty and anxiety for their children’s safety. Compensation for damages to Palestinian fields and orchards is never mentioned or even considered.

However, we note some proactive action being taken by the Palestinians. Borderlands are now guarded by a watchman. When settlers stealthily attack, the guard immediately phones the DCO and alerts his fellow villagers, who come even at night and document the vandalism by taking photos and videos.

Though “live and let live” (a Palestinian wish) is not yet here, even empowered and emboldened settlers have not succeeded in eroding the villagers’ Sumud (steadfastness). They will endure and will not abandon their land.

•         Messerschmid, Clemens. “Till the Last Drop: The Palestinian Water Crisis in the West Bank, Hydrogeology and Hydropolitics of a Regional Conflict.”     Abstract (retrieved).