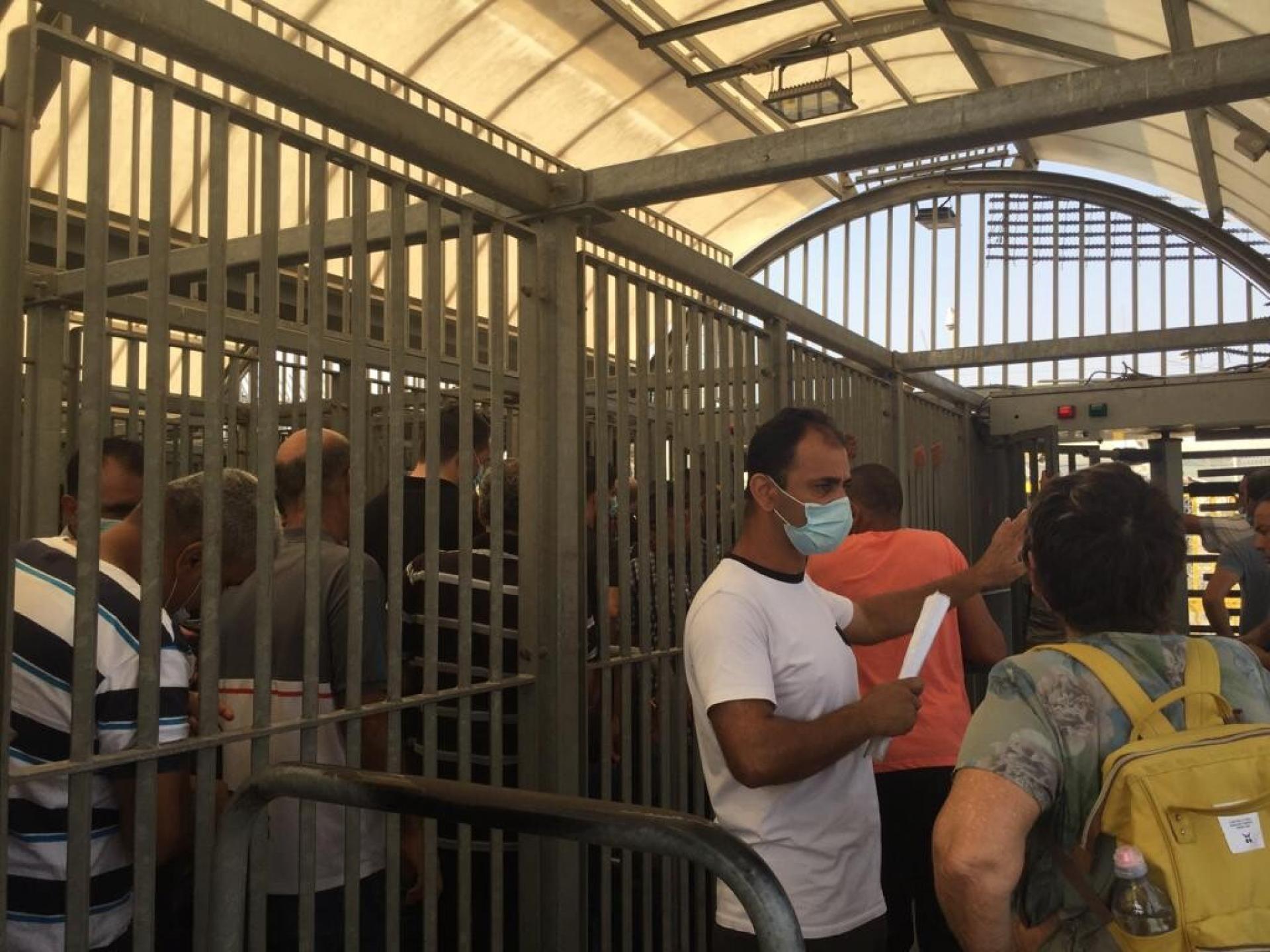 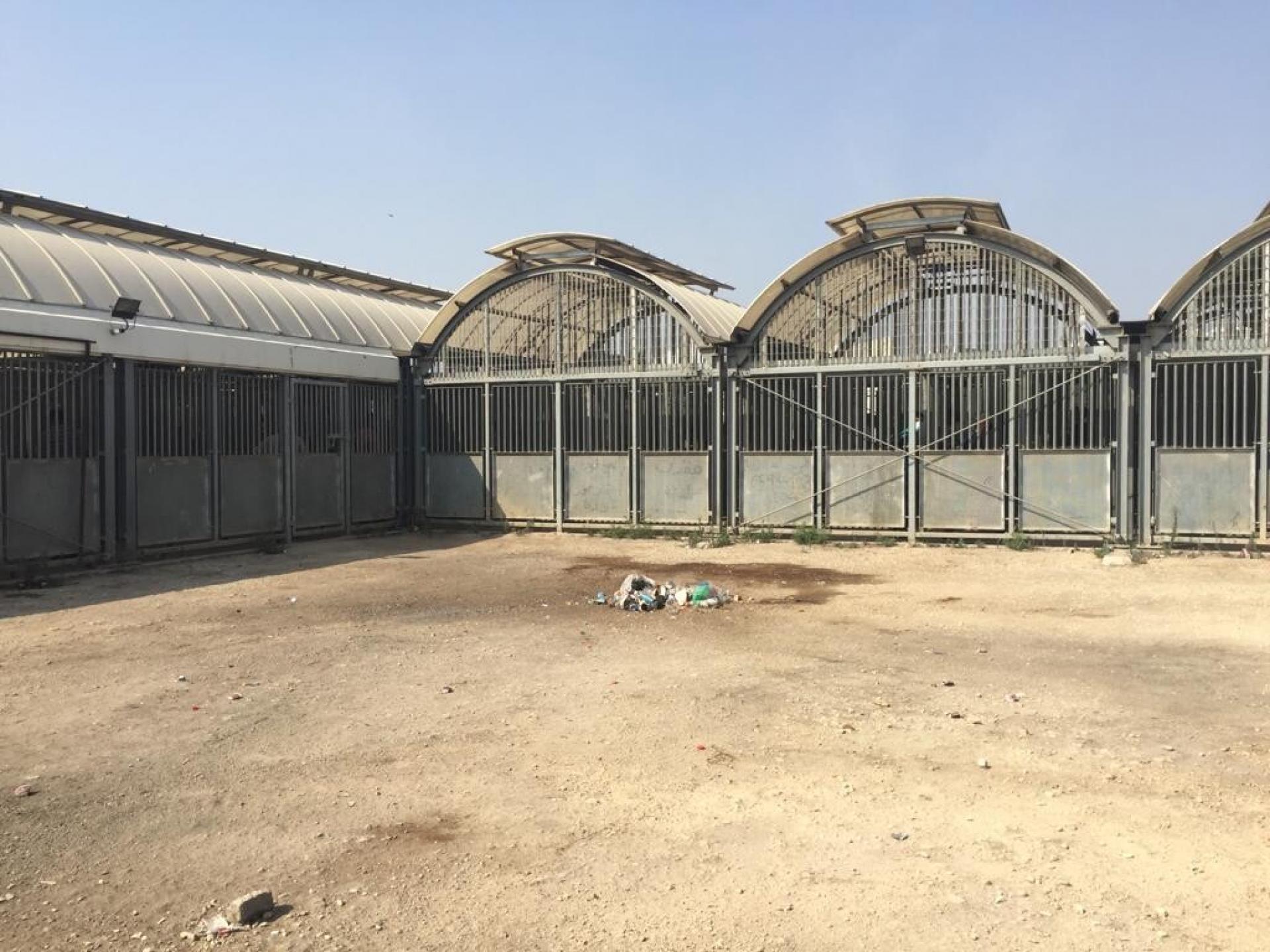 The Israeli DCO area in Tulkarm

At 09:30 we arrived at the Palestinian side of the Israeli DCL in Tulkarm, located at the Efrayim-Irtah gate in Area C.

The sight was depressing – a parking lot with Palestinian vehicles which had brought some of those who came; an expanse of sand and concrete with some stands selling fruit and coffee, while most of the others are closed, in a makeshift market covered by a cloth canopy. At the front is a structure with three arches, behind which is a passage bordered by iron grillwork in which a long, crowded line of Palestinian residents stand three and four abreast in no clear order. They move toward a revolving gate that gives access to the waiting room of the Israeli DCL, where they await their turn to be received by the soldiers behind the reception windows.

While still in the makeshift market area, before nearing the fenced passageway, we met a man older than 55 who had a merchant’s permit for Israel, but he was refused entry that morning and told that persons older than 55 are prohibited entry because of the corona virus. Roni telephoned Chana, from Kav LaOved, and was told that’s in fact the rule now regarding Palestinians older than 55. We gave him the phone number of the Moked for the Defense of the Individual to see whether they could find a solution.

Others also approached us, saying they’ve been blacklisted for 12 years, forbidden to work in Israel. We gave them Sylvia’s phone number. Many also complained that all we do is talk, but accomplish nothing.

We moved to the lines – total chaos. A congested line of some 150 people, one on top of the other, the revolving gate opening every 10-15 minutes allowing 3-5 people into the DCL waiting room some 50 meters away from the revolving gate.

The people on line were irate. They told us they arrive at 5 or 6 in the morning and wait three hours to enter the DCL waiting room, where they again wait to be called by the soldiers. Only one revolving gate is open for them to use. One man said he’s been coming daily for a month to renew his work permit, but never manages to reach the soldiers’ windows, and often they announce at a certain time that no more people will be received that day. Everyone is bitter.

At 10:15 the Israeli DCL called over the loudspeaker, in Arabic, asking people not to crowd the revolving gate, to move back. People moved back a little and you could hear their growing dissatisfaction.

An adjacent revolving gate was used by exiting Palestinians who’d succeeded in reaching the soldiers’ windows – few exited, compared to the mass of people waiting to enter. Some had managed to obtain the permit they’d sought, others submitted documents and had to return in a few days for an answer, and still others, unsuccessful, left empty-handed.

Some Palestinians tried to enter through the exit gate but didn’t succeed; in despair they joined the long line, hoping they’d get in that day. We couldn’t find out exactly what people were hoping to accomplish because they were so upset and annoyed.

The Israeli DCL, even though it’s responsible for issuing permits, hasn’t upgraded the crossings nor increased the number of entry lines, nor the number of soldiers’ windows within, despite the strike by Palestinians.

Even though the Israeli army, as the occupying power, is the responsible authority, according to international conventions, to ensure the welfare of those under its authority, it does nothing at all to ease the residents’ burden. Israel apparently doesn’t consider that its role is to meet the Palestinians’ needs. That’s the case ever since the Palestinian vassal – that is, the potentate appointed by Israel to oversee the Palestinians in their approach to the Israeli lords – decided to stop mediating or, if you like, cooperating/collaborating/call-it-what-you-will, and demands that Israeli fulfill its obligations under the Oslo Accords (which have also failed).

And so the Palestinian residents find themselves between the hammer and the anvil – even what little apparent “independence” they had no longer exists, nor does it seem to.

10:45 We drove to Far’oun. We met Samir. He took us to the agricultural gate and showed the gaps that remained in the fence beside the gate, but now two or more soldiers are stationed at each of them to prevent Palestinians from going through to the seam zone and from there to Israel. All Israeli army solders have turned into a living fence – actual, not metaphorical – interposed between the occupied territories and the seam zone.

Samir told us that, apparently, permit holders were again allowed, from today, to cross through the Irtah-Efrayim checkpoint, but only, as noted, those younger than 55. All others were turned back.

(In addition: As we drove through Tulkarm we came across a maqqam called Maqqam Benot Ya’akov (مقام بنات يعقوب), a building surmounted by two domes and surrounded by a garden that was turned into a park with stone paving, shade trees and ornamental bushes, benches and a small ornamental pool and picnic area. The Tulkarm municipality renovated the location for the benefit of the residents. The guard on site told us people don’t treat the maqqam as a holy place and don’t come to worship or prostrate themselves on the tombs. Families with children arrive in the afternoons to enjoy the evening breeze, outside, in public. In the middle of the park is an additional structure that belonged to an elderly resident of Tulkarm who died two years ago. He’d been the town’s last remaining potter, but his pots weren’t preserved nor were they ever displayed in an exhibition.)

Attached are photos and videos taken by Roni and Pitzi.