Etzion DCO: Victims of the shocking bureaucracy of the occupation | Machsomwatch
Skip to main content
Back to reports search page

Etzion DCO: Victims of the shocking bureaucracy of the occupation 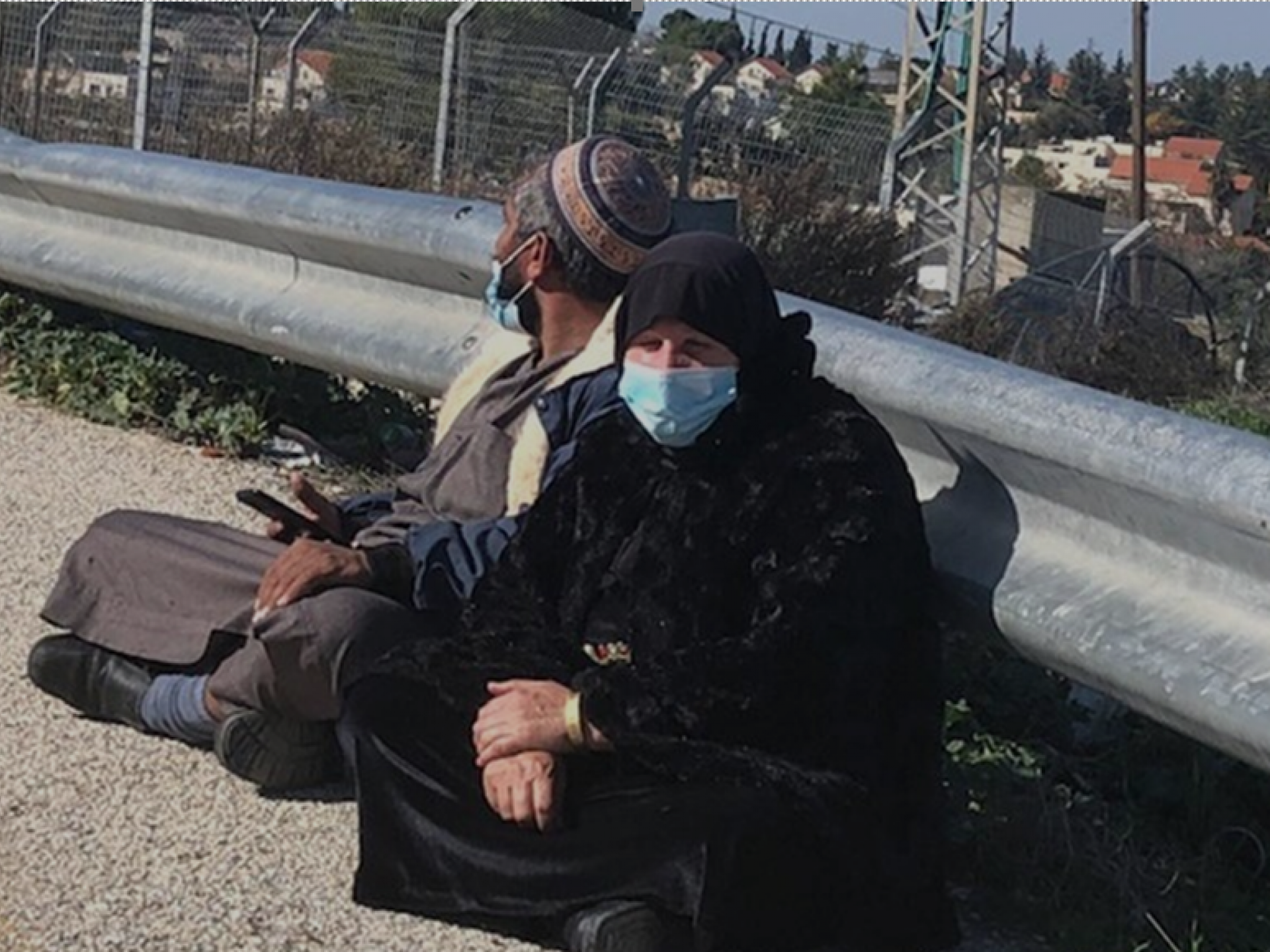 Etzion DCO: An elderly couple are sitting on the road because there are no benches for those waiting 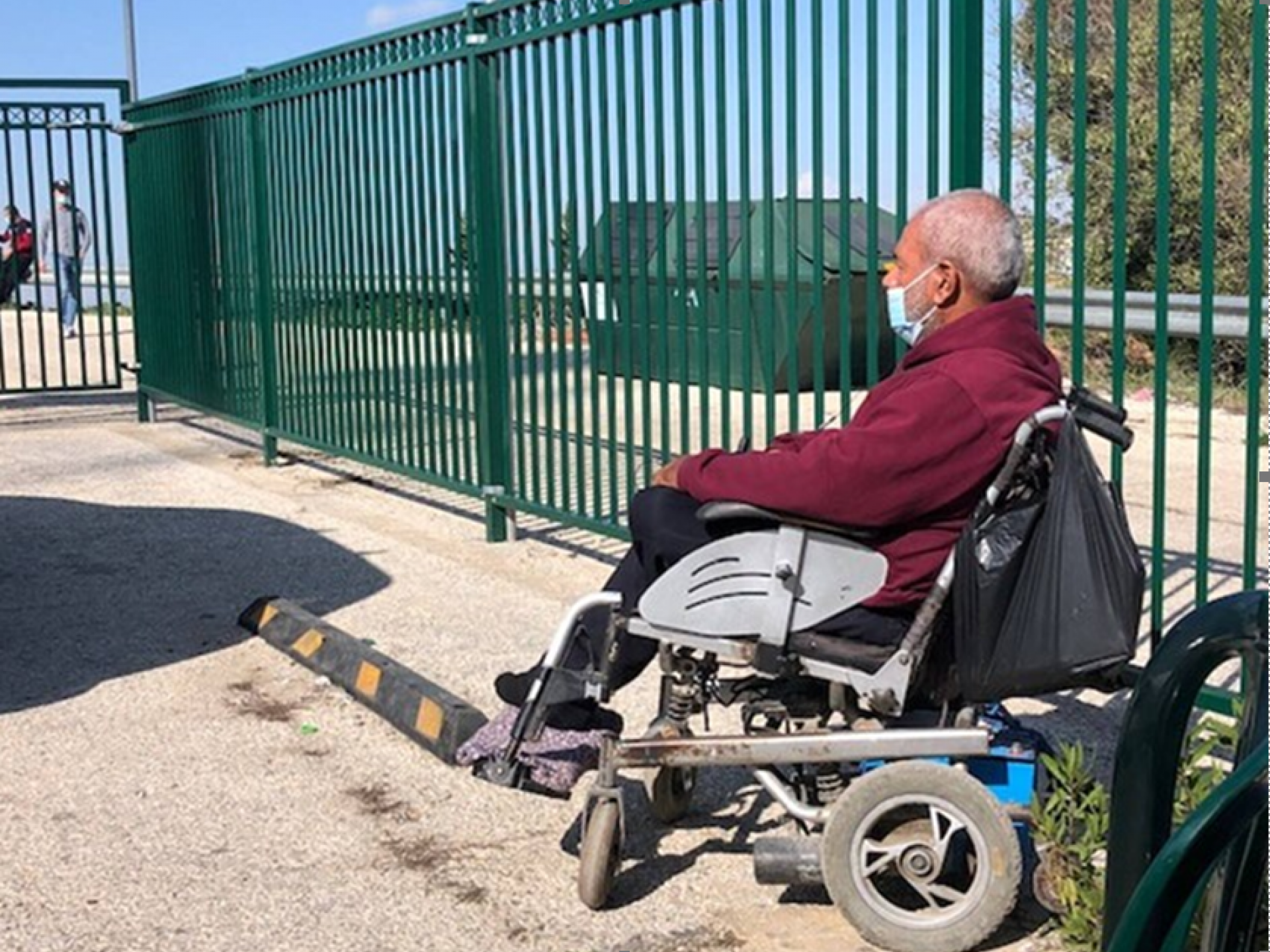 Etzion DCO: An amputee in a wheelchair says that sometimes he is asked to get up from his chair while a probing dog checks the chair.

In most of the following cases we gave people Sylvia’s number to follow through. Two of them said she had helped them in previous years. We gave others the number of LEAP (Legal Aid for Palestinians) and naturally advised them not to turn to lawyers unless they must, and then use Sylvia’s recommended names of honest and reliable people.

Three people who waited, with documents showing their ownership of land, said they had already been to the DCO often in the past about the matter. All the people in the photos enclosed, incidentally, allowed me to photograph them.

An elderly couple sat on the floor, for naturally there are no benches for people waiting.

Among those waiting were people who were summoned for questioning by the Israeli Secret Service. They are all from Hebron. One was lucky. He received a regular phone call and was told to report to the DCO. Two others were less fortunate. One of them said his entire family (12 people, including children and grandpa) were awakened at 2 a.m. by voices of soldiers calling to him politely that he must show up at the DCO at 8 a.m. The other person’s story was less moderate – he too was approached at 2 a.m., but his door was banged in order to give him the polite invitation to come to a Secret Service questioning. His home was messed in the process.

A man caught driving over the white line in the middle of the road gave all of his documents by order of an officer who did not show him any identification, only said his name was Captain Imran. By law, a person is not to be separated from his ID, but this did not deter that officer who took his ID and all the rest of his papers, including car registration etc. He was told to come and get back his papers at the DCO and then at the police station. His friend came with him to the police station, and also gave him both the LEAP number and Sylvia’s.

A person in a wheelchair did not wish to explain to us exactly what his problem was. He said that he was told to wait because the computers were not working, although others were coming out of the offices with their papers… He said someone was helping him.

Someone told us about a man who was told to turn back home at the checkpoint, after having crossed without any problems for the past 3 months. He has not idea why he is suddenly blacklisted. The soldier told him he could not say why the man was prevented, since the computer was stuck. He also saw people coming out of the offices with their papers (out of the computer)/

A man in a wheelchair, an amputee, must reach the hospital. He says that he is often ordered to get out of the wheelchair and stand (how?) while the wheelchair is inspected by a sniffer dog. The dog climbs on the seat and sniffs, leaving marks. By the way, dogs are considered unclean by Muslims. The man was also very bitter about the Palestinian Authority and the way they take care of problems.

Two men wish to go to Jordan. One has a seriously disabled child with a leak in his brain. He is paralyzed and cannot speak. Captain Omar who was at his home and saw the child told him that after seeing the state the child was in, there would be no problem passing him into Jordan. He, his wife and the child showed up at the Jordan River crossing at 3 a.m. and were sent back home. He was told twice that there would be no problem, but was turned back each time. He keeps coming to the bridge and being sent back.

Another man wishes to make the religious pilgrimage with his mother, but since his father was a martyr (suicide comber?), he is refused passage.