My beloved bureaucracy. Bureaucracy is the ideal instrument to bully anybody who seems to need bullying, who in fact just wants to process his land. Delay procedures, innumerable types of permissions, permits and all kinds of coordinations, in the hope he gets fed up with the whole affair and relinquishes his lands. Just do not search for logic in rules and regulations. In this report there are some common instances we encountered during our last visit.

A.'A. cordially welcomed us at his house. In spite of the fast and not heeding our protest, he brought a bottle of cold juice and urged us to drink. “You do not fast, right? So drink!” he commanded, and served me the glass he had filled up.

Only in the course of our conversation, it became clear that over 100 dunams of his agricultural land, on which  fruit trees are planted,  are situated on the western side of the fence. About ten years ago, he was invited to a conference in London, as a representative of the agricultural organizations. There he spoke about the fence. On his return, he became a “prohibited” person and couldn’t reach his land for two years. Thus will be done to whomever discloses the true story of the fence. After lengthy legal procedures, which almost reached the High Court of Justice and in which great financial expenses were involved, he received a “permit of a prohibited person” to reach his land. This means that he is allowed to reach his lands, but the prohibition to enter Israel was not removed, despite his advanced age (73). Four months ago his request for permission to reach his lands was again rejected. When he tried to find out the reason for that, he was told that the land registration had expired. Once every two or three years he has to get a renewed land registration document which, of course, involves payment. All this just to enable him to reach his plantations.(In Israel only whoever changes proprietary rights has to provide a land registration document, which he gets on the internet for a minimal fee, in a day). A.A’. supplied the document from the land registration over a month ago, and is still waiting for the permit. This means that he hasn’t seen his land for five months, and is still waiting. The delay procedure is one of the exhausting bureaucratic procedures of the civil administration, by means of which it rules the life of the farmers and embitters it.

After he gave us to drink and after we heard his story, A.'A. accompanied us to the checkpoints.

We arrived 10 minutes before opening time. A.'A. invites us to breathe fresh air in the shed of the water pump operator. This indeed was a refreshing place on this hot day (photo below). 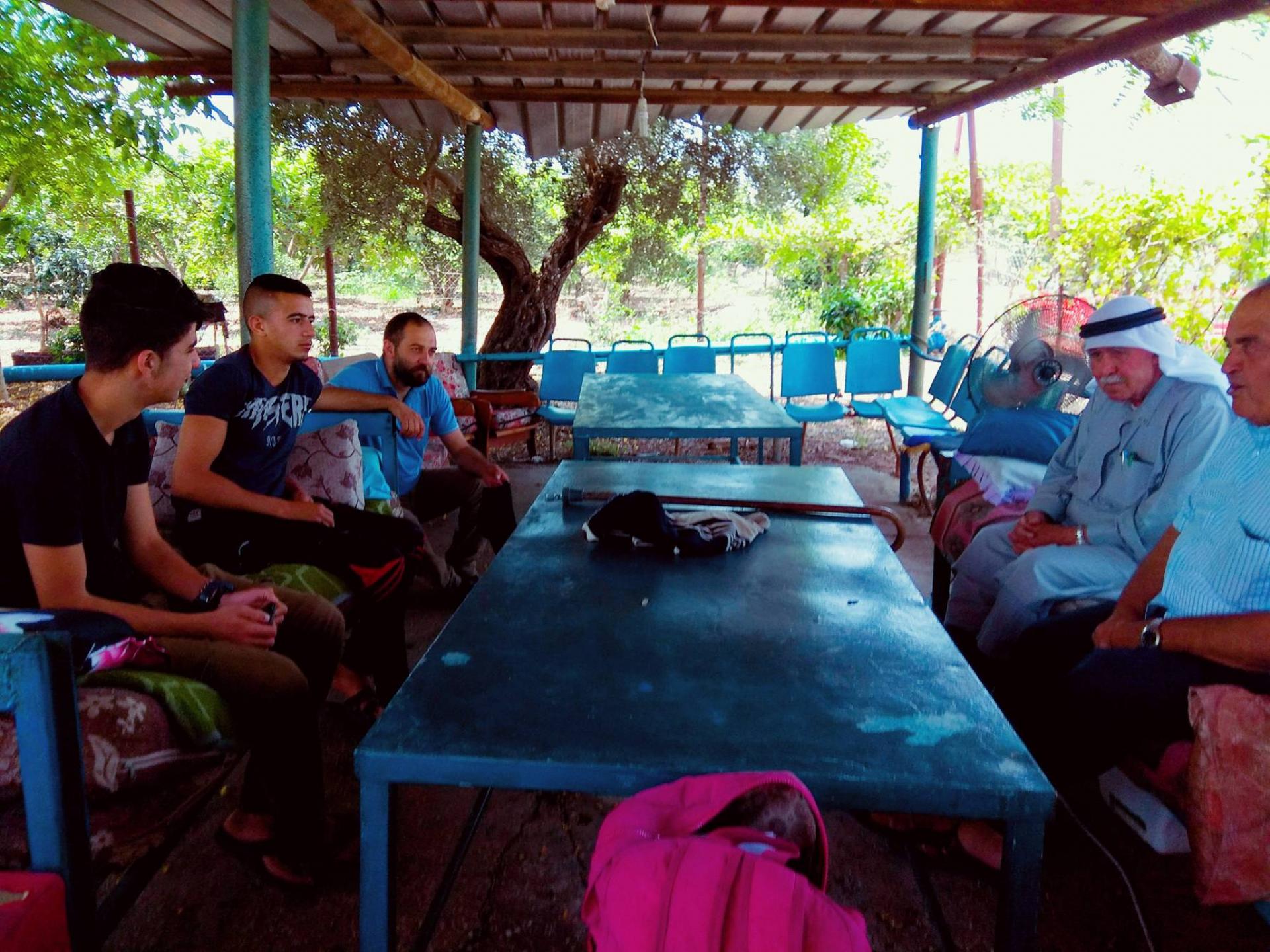 In the shed of the water pump operator
Photographer:
Ziyona Snir

The gate was opened  with a five minutes delay. A young man from Kafr Jamal was waiting for it to be opened. He had a cart attached to a tractor, but since two weeks he enters and exits with the tractor only. Two weeks ago he passed, as usual, with the tractor a d the cart, but when he returned he was told that the cart had no permit to return to the village. Thus, since two weeks. He cannot bring back from the field, crops and equipment. In his attempts to understand the reason he was told that the cart needs coordination!!! Just don’t look for logic. He has already despaired and thought to give up.  In the course of that day he called to announce that today suddenly they allowed the cart to exit without coordination. About ten tractors returned with vegetables or with carts loaded with iron poles.

The gate was closed 5 minutes before schedule.

According to A.H. the gate is supposed to remain open for 40 minutes, but usually remains open only about 15 minutes. Today only 10 minutes were subtracted  and the traffic was very sparse. Perhaps owing to the Ramadan. The gate was opened with a delay of five minutes. Few tractors return or enter. A taxi brings food for the people from Jiyus who have a permit to stay 24 hours, and takes pepper crates from them.