A tour of checkpoints and enclaves in North Jerusalem 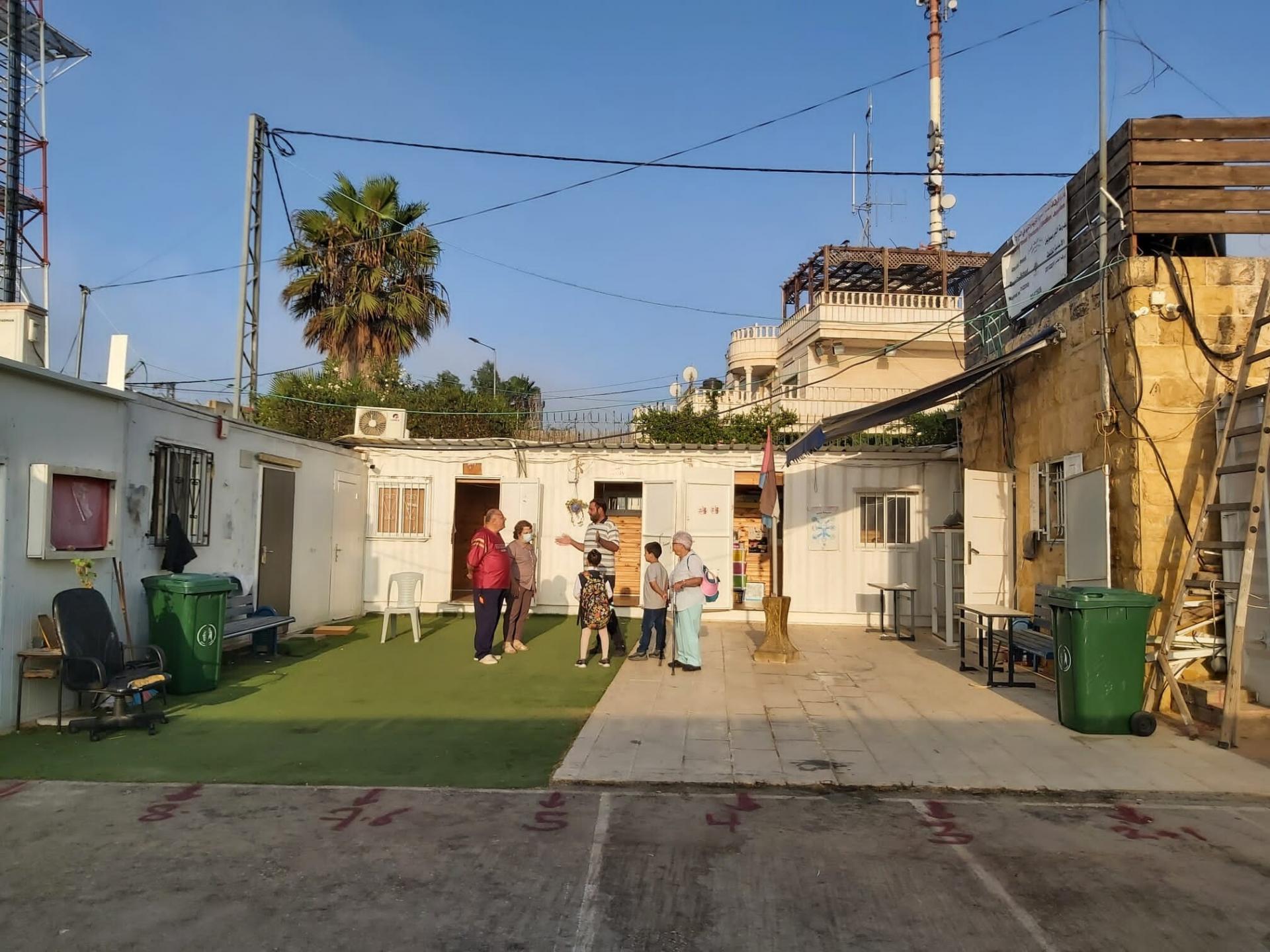 Photographer:
Ronit Dahan Ramati
At school with the maintenance man and two students 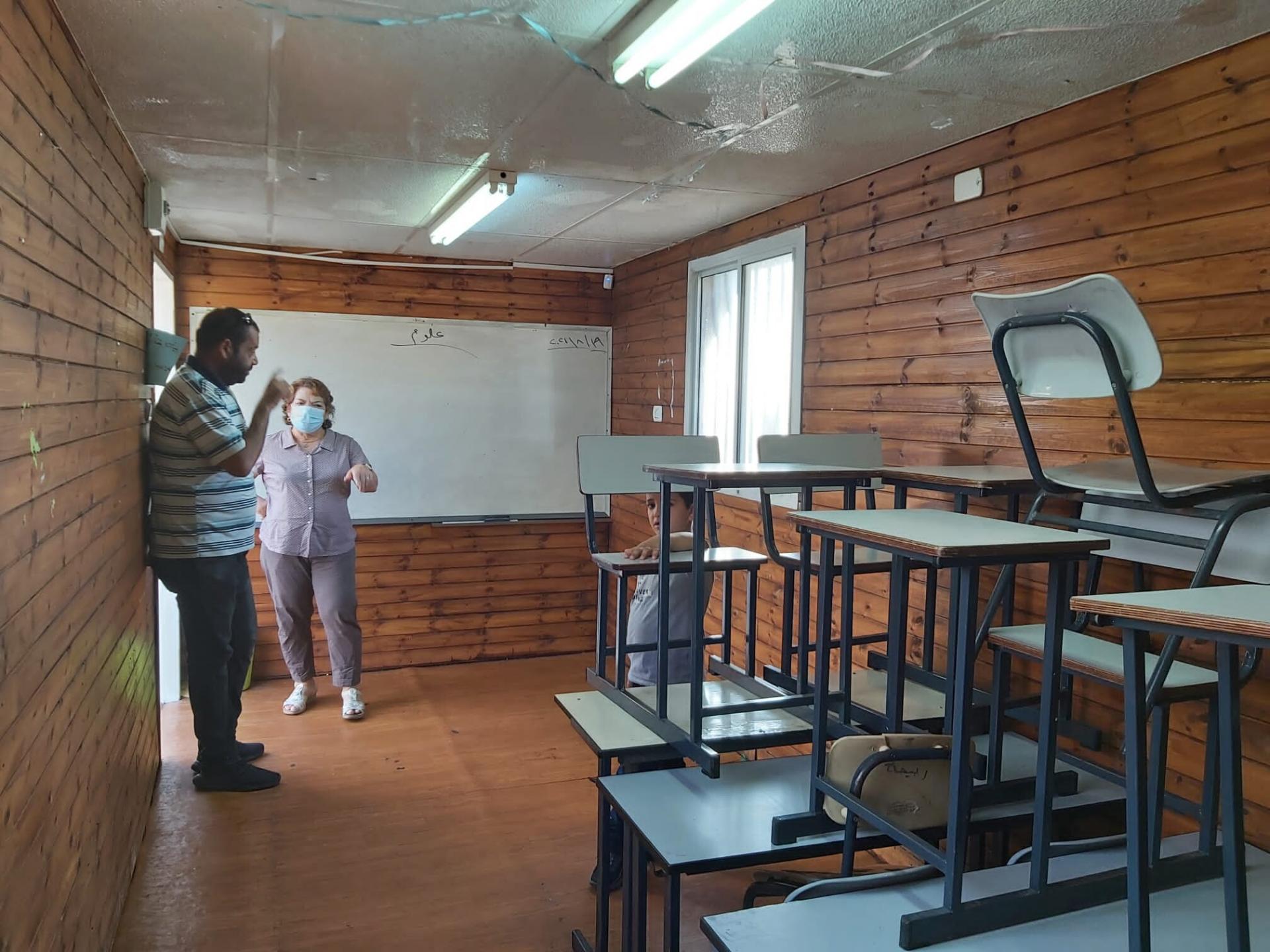 Nabi Samuel: The largest class in the school 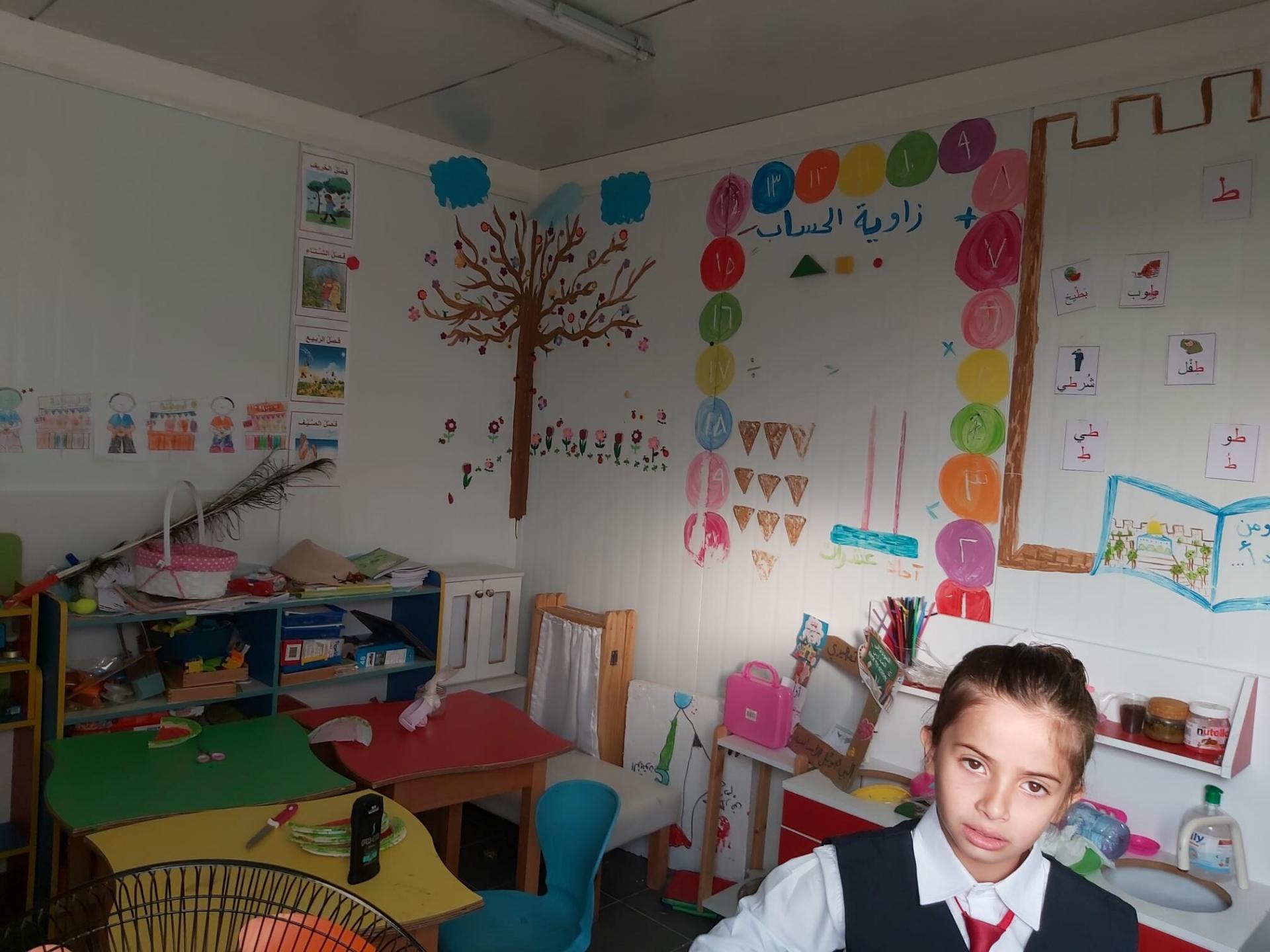 Nabi Samuel: The kindergarten class at the school 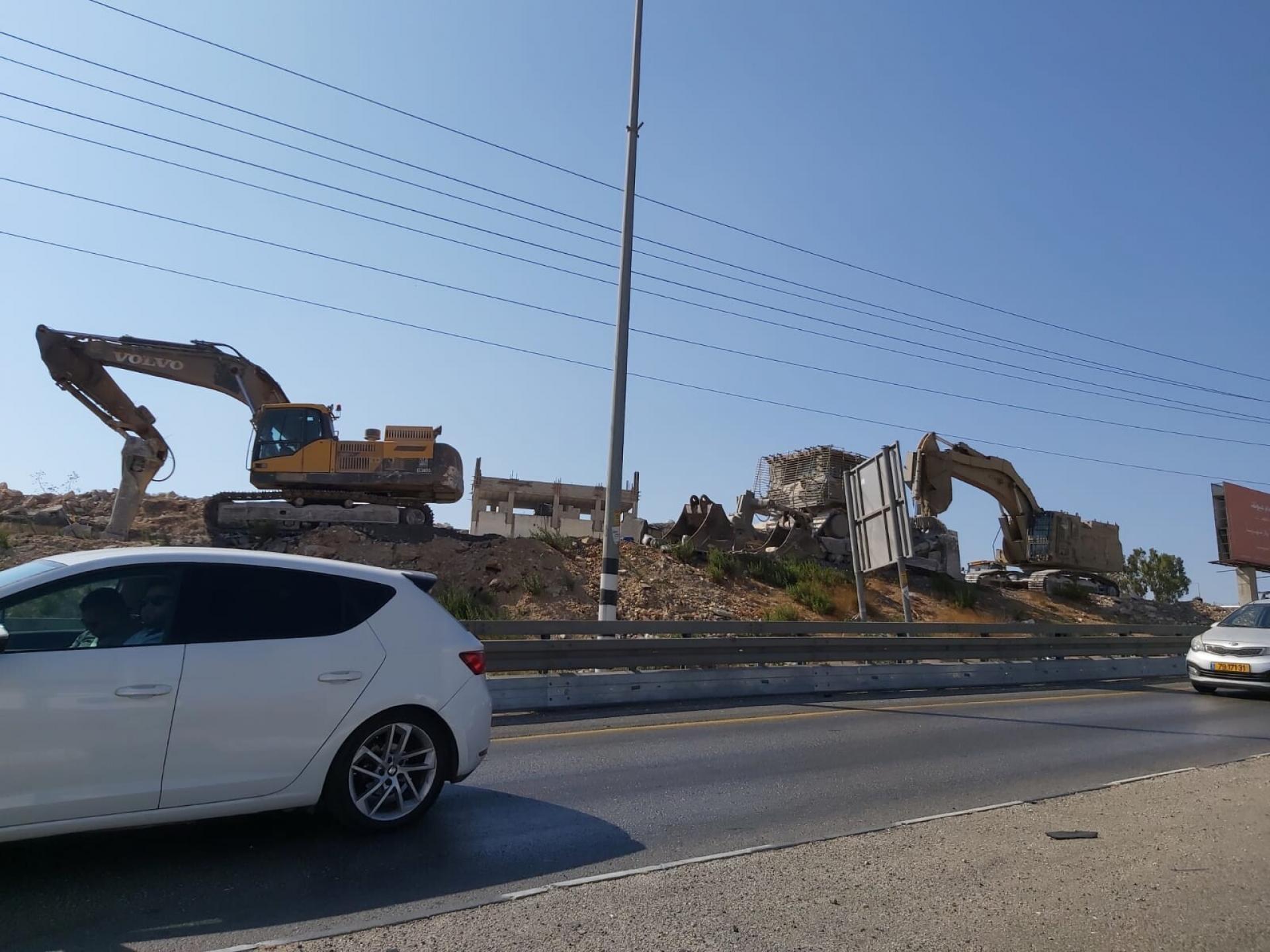 A road is being built over Highway 437

70 school children from kindergarten age until 9-years-old living in Nabu Samauil and the village of Halaila between Giv'on and New Giv'on attend the schoolhouse. The janitor has arrived with his son and daughter, who study at this school. The structures are small prefabs, and the children ran and opened all the doors, proudly showing us the tiny class rooms that hardly contain the chairs and tables. There are 13 teachers, mostly from Jerusalem, and the curriculum comes from the Palestinian Authority (there's a Palestine flag hanging in the kindergarten). In spite of the harsh conditions, apparently the school is doing a good job. The janitor spoke of people's hardships, where they cannot tend their fields or construct, and any building taking place is immediately destroyed. Material about Nabi Samauil is present on our website.

On our way to Al Jib we cross the closed gate near the settler-colony of Mount Shmuel. The checkpoint blocks the road that used to lead to the farm lands of Nabi Samauil and other villages. Luckily there is a hole in the fence that enables one to cross it on foot. We drove to Giv'on to show Ronit the house caged inside fences in New Giv'on. The only opening is a checkpoint leading to the mother-village  of Beit Ighza. Apparently, the settler-colonists living in their large and well-tended colony could not give up even a tiny piece of land that would enable the house to be included in Beit Ighza itself.

The Bidou enclave, Beit Iksa checkpoint, and back through the Bir-Naballah /Rafat Checkpoint to Qalandiya and Jab'a

We crossed the Al Jib Checkpoint to the Bir Naballah enclave. There we drove to the lower road ('fabric of life') – which is the only track connecting the Bidou enclave and the nearby villages (on pnrinciple this is Area C, while the villages themselves are Area B. The soldiers, though, think this is all Area A). Bidou looks lively – which is delightful – although it has lost its numerous Israeli customers. Finally we reached the checkpoint that prevents access from the enclave villages to Beit Iksa. Oly the inhabitants of Beit Iksa are allowed through. Another village under siege.

We returned to the Bir Naballah enclave, whose many Jerusalemite residents deserted as soon as it was surrounded by a fence on all sides. We drove then to the lower road that connects to Rafat village. We continued on the winding road to Kufr Aqab, Qalandiya and Jab'a. On our way we looked at Qalandiya Checkpoint. Even at this hour there were waiting lines at the entrance and vehicle traffic was practically at a standstill. There were bulldozers seen in the army base next to the checkpoint on the east, as works on the lower road have begun, where eventually only settler-colonists and Israelis will be allowed to travel without stopping at Qalandiya or Hizma checkpoints, and from there enjoy a rapid connection to road 443.

Hizma checkpoint was traffic-jammed, and a vehicle stood on the roadside, behind it two police vans flashing their lights. We drove on road 437 leading to the Anata-Anatot Junction On the slope beneath Hizma village we saw heavy bulldozers (one of them army) breaking open a track above the road. The sign announces a new junction to road 437. We do not understand what they're planning here that requires an overpass, but as other members have already said – eventually everything becomes obvious, and mostly touches upon separate roads for settler-colonists.

We drove apartheid road 4370 that leads Palestinians from Anata to A-Zaim, and Ronit saw for the very first time this special checkpoint located just before the connection to road no. 1. It is special since it was built according to the demands of Anatot settler-colony, and thus closed to any traffic on Friday-Saturday. Now there are only security officials at this army checkpoint, showing how the settler-colonists control even roads and checkpoint kilometers away from their colonies.

We drove back to Jerusalem through Issawiya. The police were not present here today, and there is no checkpoint at the connection with French Hill, so no taxes are collected and no licenses inspected.

The northern stretch of Jerusalem, with its many enclaves, is complicated. The enclaves were supposed to solve the Israeli capital's serious demographics. In 1967 we annexed so much territory and it is now stuck in our throats with its presently threatening natural population growth. So we have surrounded many of the Palestinians with a life-blocking wall – among them such whom we had annexed to begin with, and we continue to drive to settler-colonist land in between these enclaves. Good luck, apartheid state. 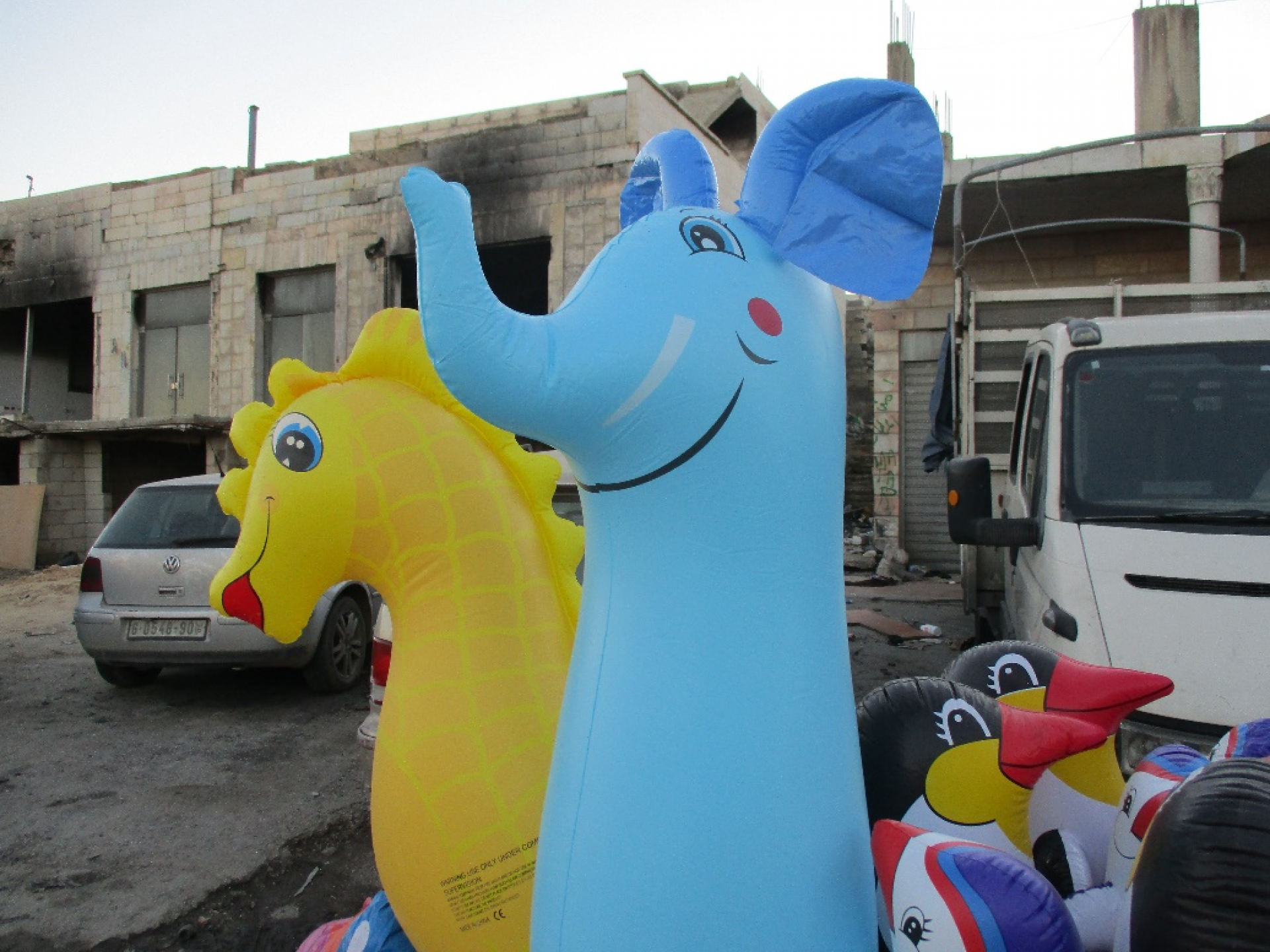 A closed gate in the Separation Fence blocks the road connecting Bidou village and six other villages to Jerusalem. Underneath passes a “fiber of life” road for Palestinian only, leading Bidou villagers and its surrounding area to the enclave of Al Jib and through there to Aqab and Qalandiya – 14 kilometers of a potholed track. The checkpoint disconnects the entire Bidou enclave and the surrounding villages from Jerusalem and Israel in general.

Beit Iksa is a village in Area C on the border of the Ramot neighborhood, to which access is blocked from both Israel and the surrounding villages, as in his hand, Beit Ijaza. The Beit Iksa Ramot checkpoint is located down the internal road that connected Road 436 to the Iksa House. Only local residents and their verified guests can enter the Iksa House.