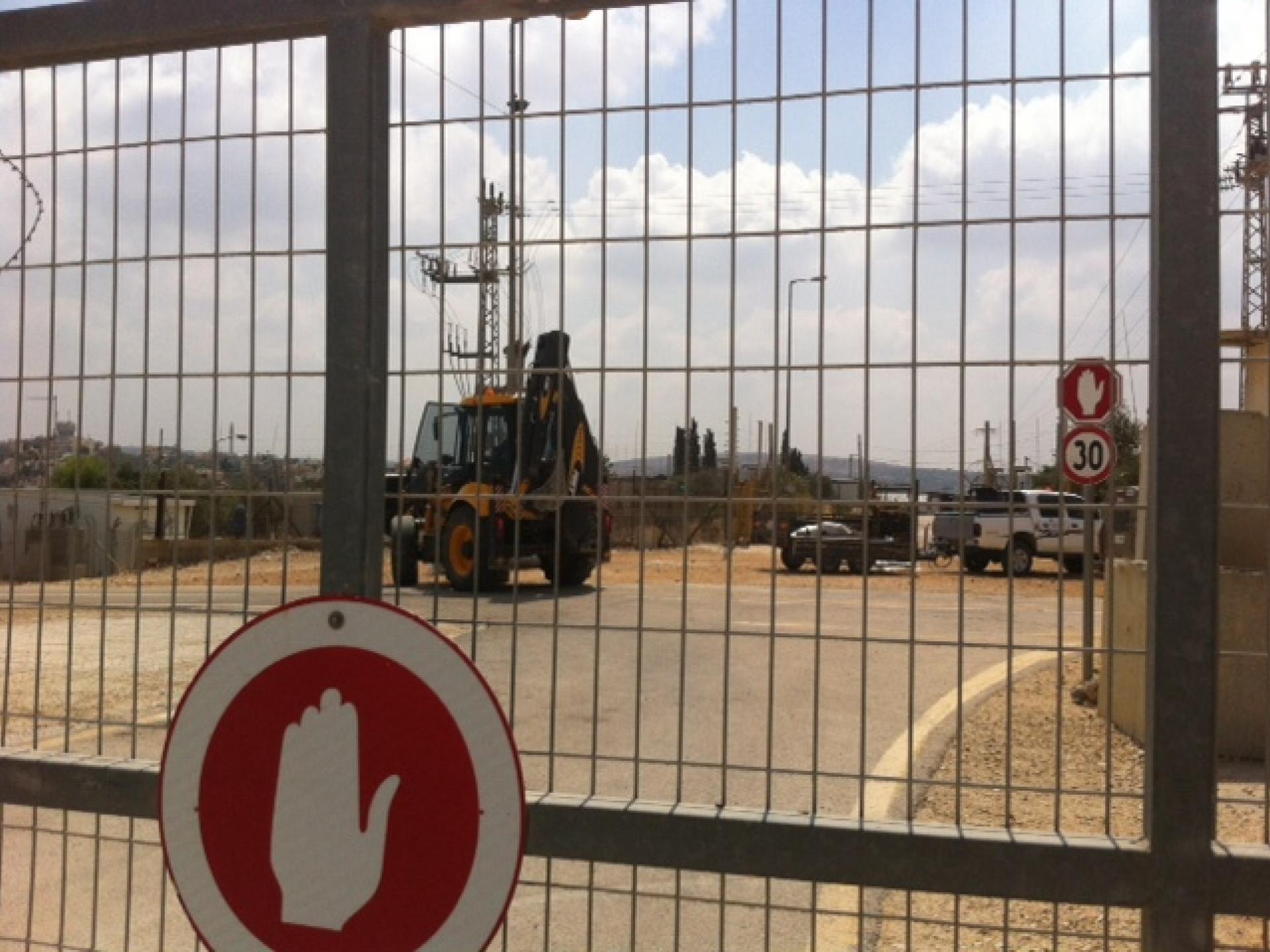 Elkana: Near Hani's gate
Photo:
Karin L
A double object: to check how much information concerning permits and the situation of the agricultural land it is possible to collect at the checkpoints, and also to carry out a short tour in the seam area

for our guests who were mainly interested in agriculture, with explanations about the difficulties of the farmers and emphasis on the improved agriculture in the territories which became accessible after moving the separation barrier westward according to the instructions of the High Court.
11:15 - A stop next to the gate of Hani, with explanations about the seam area, the isolated segments of the settlements, the path of the fence which prevents access to the fields, and also the crossing by the straight short cut between the nearby villages, Siniriyya and Mas'ha.   A truck with building materials arrives, a tractor with a crane and also a military vehicle.  The gate at Mas'ha is open and the equipment passes through.  A settler approaches us and asks that we transalte his words to the guests;  their main content was that no state which had ruled in the west bank had ever recognized a separate Palestinian entity and that, in general, no archaeological excavations carried out in the entire west bank had found anything other than Jewish antiquities, there is no scrap of evidence of other cultures;  he finished by saying that we were the worst of the anti-Semites since we are actually Jewish.  The usual security vehicle also came to check out our identity.
After a short look at the imposing wall alongside Azzun Atma  and its lands, and the closed gate, we continued to Azzun.  We entered from the road which passes next to Izbat Tabib, we were at Z. and then continued to Falamiya.
12:45 - Falamiya North (914).  The checkpoint on our side was empty;  on the other side, a tractor was waiting.   After a few minutes, a private car arrived.  The driver, G. from the village of Sur and his son who is specializing in dentistry in China and speaks fluent English, come out to talk with us.  G. has a 2-year permit, manages to get a permit for his son every summer who comes for a 2 week visit.  He is the only one in the family who continues to work his land despite all the obstacles.  His siblings dispaired and gave up.  He doesn't work their land - it is totally dried up.  In addition to olives, he has other crops.  In his opinion, 80% of the land owners from his village are no longer working on the land because of the difficulty in obtaining permits and the lack of opportunity to farm properly under these conditions.  According to him, in the local council, there is someone who deals with the requests and brings them to the Palestinian DCO, but even he prefers to make his request by himself in order to save time.
12:58 - The soldiers arrive and open the gates

.  A number of tractors enter with big wagons, some of which are loaded with huge sacks and men.  One of them answers our questions.  He is from the village of Jamal and recieved a permit for 20 days only.  He would like to work in Israel, but is not allowed.  I gave him Sylvia's contact information.  He says that, in the village of Jamal, there is someone appointed to bring requests to the Palestinian DCO, not the local council.  Groups of 4-5 farmers send in their requests together.
13:25 - Falamiya South, Jayous 935.  A farmer and his grownup son are waiting on a bench.  He speaks English and is angry about the delay.  They are from Jayous, and he knows that there are many farmers who asked for permits (through the local council) and did not recieve them.  The soldiers arrive.  Not much traffic.  We go through and return through Jayous.