At the entrance to Azzun there are no soldiers. We visit our friend Z. We unload parcels for the shop.

We wish to get to Zeta, 'Atil and Deir al-Ghusun.

We drive on road no. 557, which bypasses Tulkarem, and continue through Anabta northwards.

Yesterday, Tuesday, I called the DCO to find out about the opening hours of these three checkpoints. Immediately upon our arrival at Atil we found out that the hours which were given to us were incorrect. One could explode out of anger.

are closed. The yellow signboard is blank. It seems that the army has put it up for its beauty only and not for transmitting information. 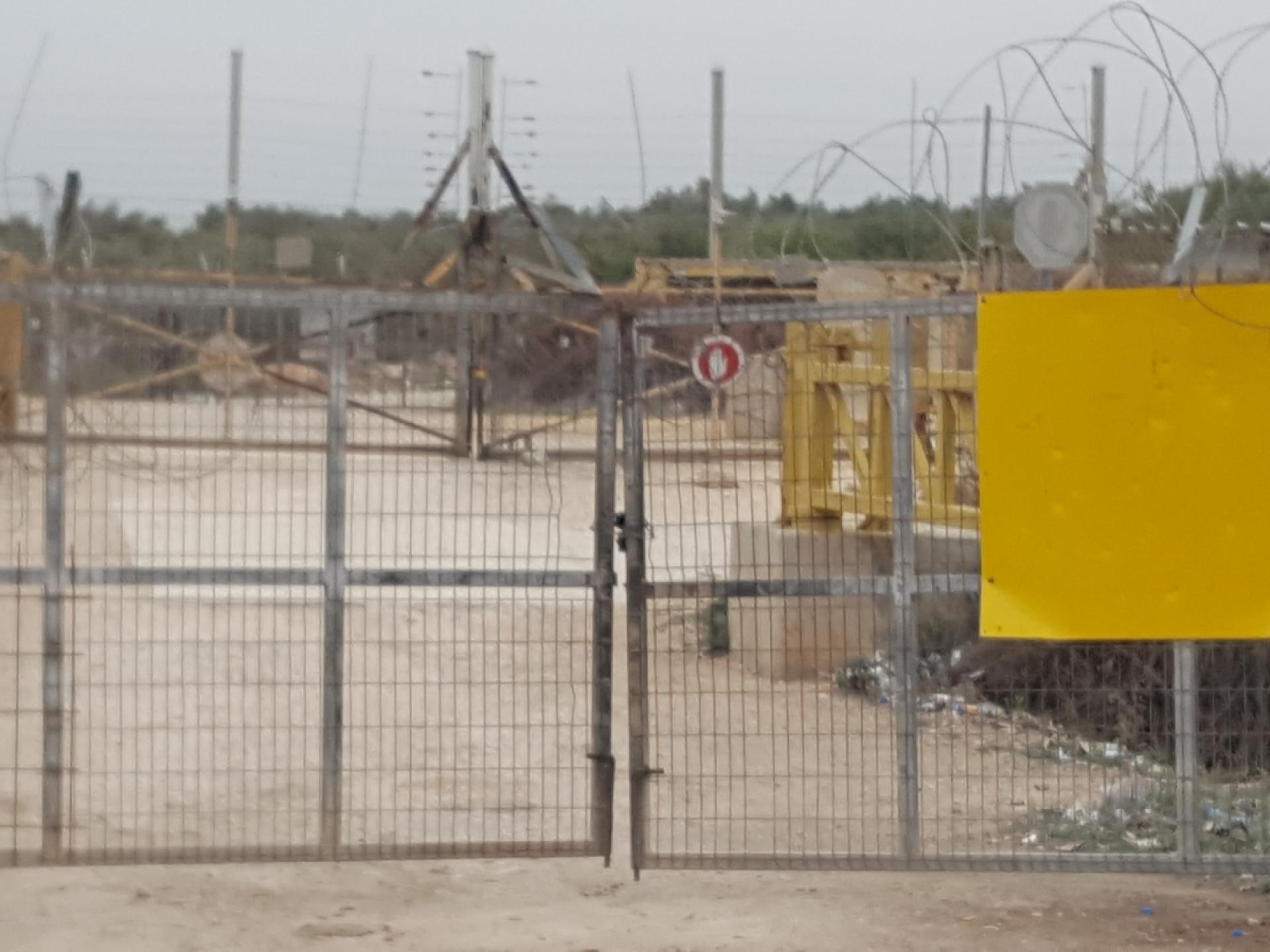 We are happy to observe movement on the other side of the CP, and although at the DCO we were told that it would be opened at 12:15 we decided to wait. It turned out that the opening hour is 12:50.

A military vehicle arrives on time and the gates 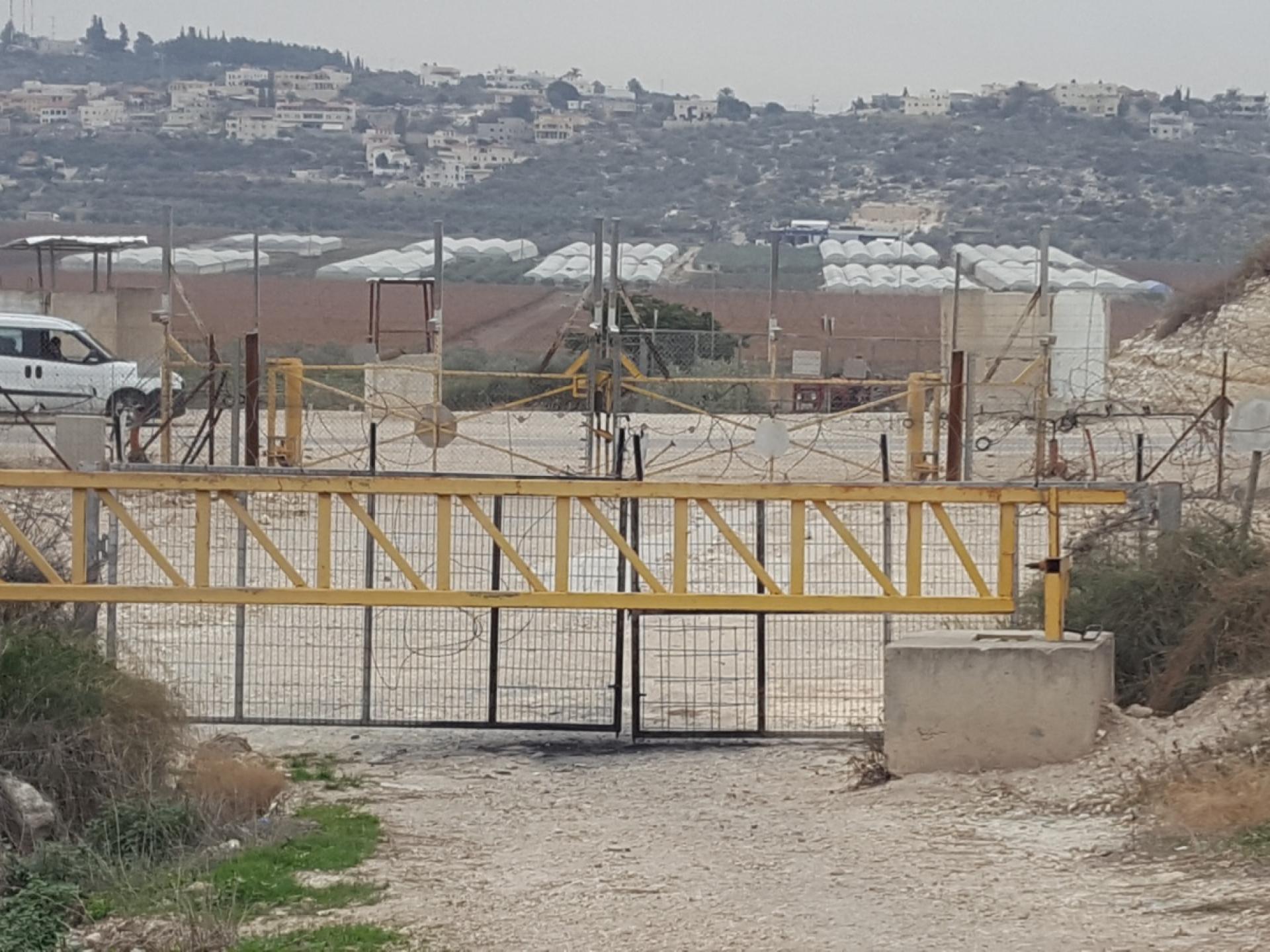 Two women pass as well as two young men on a tractor.

We ask the four to stop and answer a few questions.

All the four are from Zeta.

The two women work in Palestinian hothouses as employees (one can see the hothouses in the background). 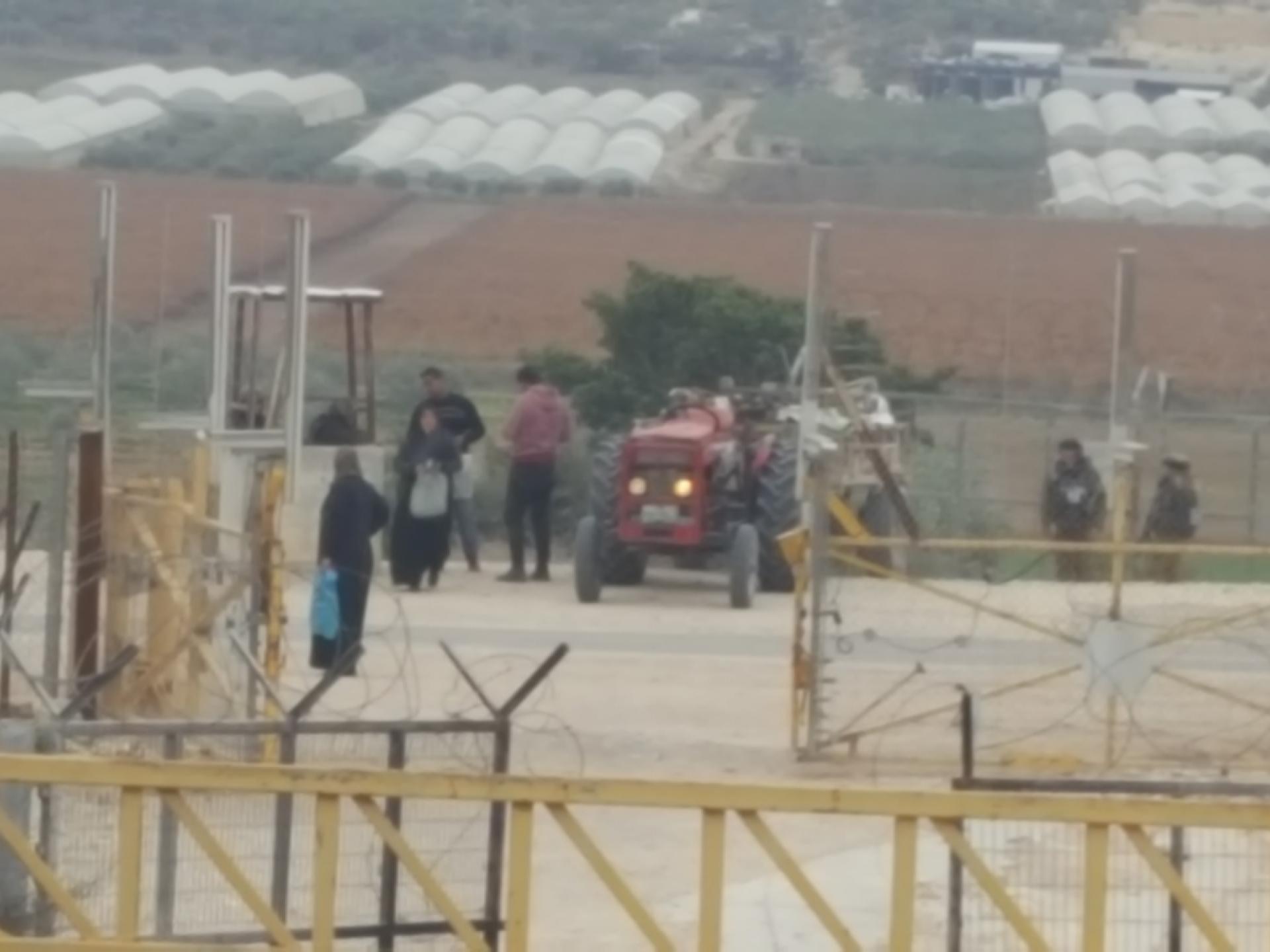 They received permits until the end of the month, and at the beginning of January they will apply again. One of them says that the plots are his grandfather’s and the second says his family has no lands of their own and that he is a salaried worker. Today he worked at a  Za’tar field. Regarding permits they say that sometimes they give them and sometimes not.

In the morning about 20 persons pass at the CP.

The gate is opened 3 times a week, on Monday, Wednesday and Friday and they want it to be opened every day.

One of the women’s brother, 30 years old, applied for a permit in October and hasn’t received a reply.

Thus each day hours are spent waiting. Nobody cares and there is nobody one can talk to.

I give them the phone numbers of the DCO and ask them not to hesitate call and report each delay. Let them bombard with phone calls. Maybe someone would wake up there.

The women ask that lightning be installed. The day is short and they return home in darkness. I refer them to their council…

We drive to G.’s shop and there we meet his brother. He tells us that the CP is opened at noon at 12:00 and in the evening at 16:00. According to the DCO the CP is supposed to be opened at 13:00. There is no connection between the information I received from the DCO and between reality. There is no use driving to the checkpoint and we continue southward.

Although we have not made an appointment we enter the Baladiye. 5 minutes before closing time, but B. agrees to talk with us and he is full of stories:

During the olive picking period 380 persons received permits – for 3 months. All of them got the same permits, without taking into account the size of the plot. After the olive picking period the picture is different: the DCO returns application on the claim that the size of the plot is too small. Whoever has less than 100 meters does not receive a permit.

And how does this happen: Theoretically the Israeli DCO distributes the plot which the children and grandchildren of the initial owner have inherited (according to the Islam men receive a plot double of that of women). As the families are large, the result is that some inherit a very small plot. Those who do receive a permit work in the plots of the brothers who didn’t receive one.

150 new applications which they have submitted to the Palestinian DCO  have not been transferred to the Israeli DCO as they were told that Eyal Salman who is supposed to receive them and deal with them is away on vacation. A good reason, isn’t it? He has no substitute!

At the Israeli DCO they tell the Palestinians that children up to the age of 6 are permitted to pass with their parents without a permit. When they arrive at the CP the soldiers don’t allow them to pass, send them to the DCO to get a permit. Abuse? Bullying?

The soldiers check the clothes of the Palestinians. Persons who wear clean clothes are detained. They immediately are suspect.

They also check how much money they have in their purse. Whoever has over 20 shekel has his permit taken away immediately.

The soldiers also know that a person who works at olive picking has scratches on his hands. The permits of  Palestinians who do not have such scratches – are taken away. The explanations that they wore long sleeved shirts in order not to be scratched – are to no avail.

Sometimes there is a havoc near the gate. Everybody wants to pass and reach his working place. One days the soldiers closed the gate and the people returned home. Only 20 persons managed to pass. A collective punishment as Order must prevail.

A portly young man arrives at the CP. He exercises weight lifting. The soldier tells him “your face provokes me” and takes his permit away from him.

All the people are afraid of going to the Israeli DCO lest they be accused of being collaborators.

The soldier orders a young man who arrived at the CP to sit in the shed as he seems suspect to him. Thus it goes for three days. The young man sits and waits from morning to evening. He asks the soldier why? The soldier replies – because you are a peril to the security of Israel. And this is a Palestinian who got a permit.

B. remembers that seven years ago the soldiers undressed three young Palestinians. There was a big outrage. People from Ramallah and Jerusalem came to hear the story. But the young men were afraid to testify lest the conqueror take revenge on them. The army removed the soldier who undressed (or perhaps they transferred him to undress people at a different CP… )

The Baladiye secretary stands already over half an hour with the keys in her hand. She would like to close and return home. We stand up and take our farewell. Although B, has a load of more stories about the good treatment the Palestinians receive from the most moral army in the world.

At the Jubara CP we are interrogated. Where have you been and what have you done. We visited our aunt at Avney Heffetz we reply. And what is your connection with the driver? His name is Mustaffa and he is of course a suspect. But he is our driver. Not only that he is also a wonderful translator!

At the DCO we were told stories about a key that was lost and that the farmers had to wait for two hours for the gate to be opened – everybody was looking for it, everybody was involved.

And in the afternoon an even weirder story:

The Palestinians are waiting since 15:30 for the gate to be opened and at the DCO they reply that since it is now winter time the opening will be at 16:45. I try to appeal to the man’s logic. I explain to him that in the winter it gets dark sooner therefore the opening hour is set earlier. But the young man is adamant: this is what is written.

It is of course impossible to get in touch with Walid, Fatyan and Eyal. It is Thursday today and they are already at home.

And something pleasant for the end: S. tells me that his “prevention” has been lifted after so many years. He is on his way to Qalansuwa to visit his wife and daughters.

Scheduled to be open daily.