We went to visit Ujja, where demolitions took place 3 days earlier, and the owner of the demolished home was badly hurt by teargas and pepper spray, and was transported by the army to Hadassah Hospital in Jerusalem. We also wished to see what happened to the inhabitants of Al Hama whose encampment was demolished nearly two months ago, and were demolished time and again when they tried to put up some shelter for them and their livestock since.

We found out that at Ras Al Ahmar another tractor was confiscated today, after the inhabitant suffered massive demolitions,

two days evacuation due to army maneuvers and the confiscation of five tractors. 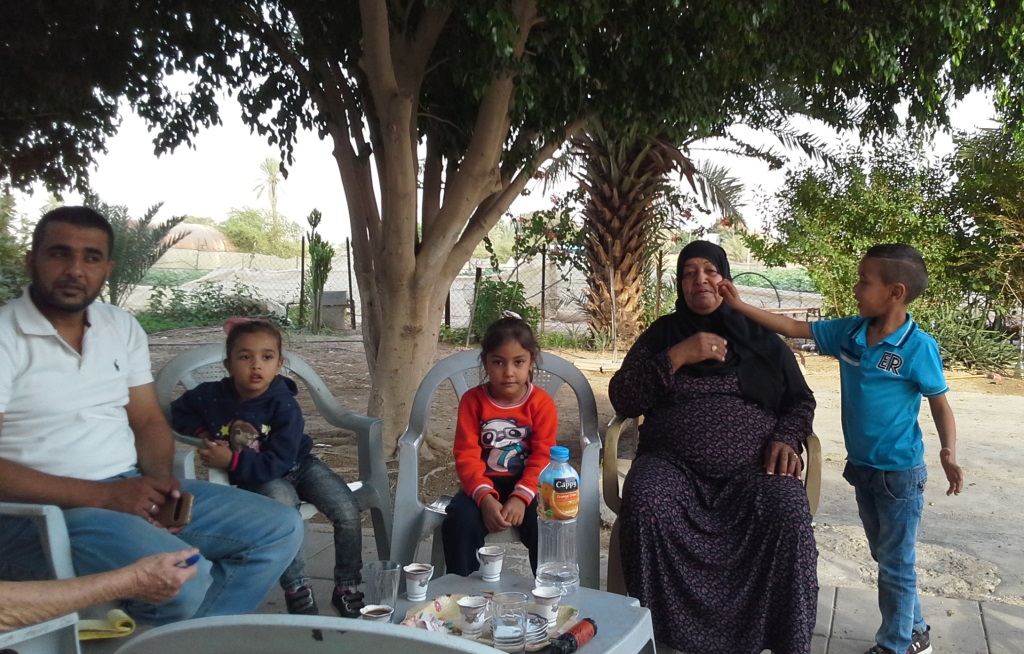 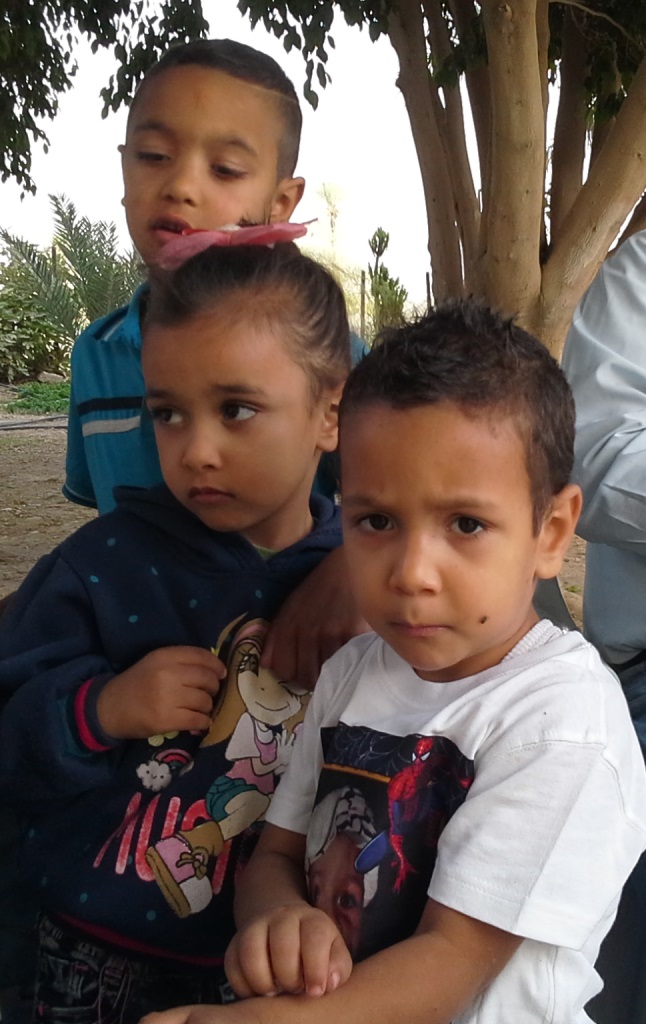 At the northern entrance to the village on road 90, before the shopping area,, to the right of the road, about10-20 meters away, we saw remnants of a long and narrow structure. Small piles of building blocks and other rubble from a demolished building. There we met F., son of the owner who is hospitalized, and were invited to sit in the yard of a nearby home that belongs to another family member.

He told us that the area next to road 90 that belongs to his father. The father built his home there, (the house, still under construction, is still intact), as well as a row of shops that were meant to promote the family's economy. This is not a wealthy family. The father works as a school janitor and earns 1200 shekels a month. The son has

been working for 10 years in Na'ama settlement, earning 70 shekels on an 8-hour workday, without any kind of social benefits (sick leave, pension fees etc.). The Civil Administration threatens to demolish the home as well.

The village of Ujja is located in Area B, namely and supposedly under Palestinian control if all civil issues (except for security). The family was issued construction permits by the Ujja local council. The problem is that their area is located next to road 90. All important thoroughfares in the West Bank are considered Area C. Ujja, at the center of which this road passes, is split in two, because the road itself is Area C. The question is how many meters on each side of the road are still Area C., and who determines this? In the meantime, the army sets facts on the ground by using bulldozers. The family has received attorney services from Israeli peace organizations. 3 days ago, during the demolition, there may have been neighbors gathering angrily about. The army used teargas. The father ran to the yard where we were now sitting, which is in Area B. There a teargas canister fell, and the father collapsed on the ground. After falling, he was still pepper-sprayed. His condition worsened and the army had a helicopter summoned to transport him to an Israeli hospital. Now the army claims not to have thrown teargas ;canister inside the yard, and that the father was not hurt there but on the roadside. We watched videos of the incident which clearly show the teargas cloud next to the house and the father collapsing in the yard, as well as the Border Policeman pepper-spraying him. The bulldozer is also seen in the video, and no one gets in its way to top it. The army demands that the family pay the costs of the helicopter evacuation to the Jerusalem Hospital, a sum of 27,000 shekels, before a single shekel is even paid in hospital fees…

Importantly, the father's conditioned improved and today (Sunday afternoon) he was released home after 4 days in the hospital. One of his eyes was injured so he could not see, and he suffered chest pains from inhaling teargas. At the hospital, according to his son, he was told that his condition would improve with time. We did not meet the father, who returned as we had to get on our way.

We sat in the yard with the man's son, F., and the aunt who prepared coffee, and were joined by three other uncles – friendly, hospitable people who thanked us for our visit. They especially praised our taking interest and the continuous contact with Amira Hass. The Na'ama settlement employers also came to visit. Finally our hosts treated us to packs of dates, probably product of Na'ama, where the son toils for a pittance.

Workers' wages at the settlements

Like F.'s, their wages are 60-70 shekels a day for working in severe heat, sometimes inside the greenhouses, even hotter than the sun-exposed fields. They receive their wages in cash by day, without any kind of "stub", no evidence of the crime… No social benefits. As the settlers are Israeli citizens, they are bound by the minimum-wage law, but everyone keeps violating it. And no one can appeal to the courts. Even a worker who is fired on the spot without any kind of severance pay. Why? Because beyond the problem of proving that he was indeed employed, he will be punished in that neither he nor any of his family members would ever be employed by any settlement in the Palestinian Jordan Valley. This we hear from every Palestinian in the area. And this, apparently, is what they hear from their settler employers.

The A. family at Al Hama

This is the extended family (25 persons) whose homes and sheep pens were destroyed on September 28, and ever since they have been surveillanced and suffered another two demolitions of whatever they put up. In the meantime, a large demonstration has taken place there (about 100 people attended), mostly Palestinians, and a protest tent was erected opposite the outpost of Giv'at Sal'it that is gradually surrounding them. Here too the army used teargas. There were two wounded Palestinians. Taayush members were arrested and were issued distancing orders. In the meantime 3 tents have been erected on the spot. Attorney Tawfiq Jabbarin obtained an interim ruling by the court forbidding further tent demolitions at Al Hama. The question remains: will the army respect the court order as it does the demolition orders.

A,, the family father, told us that settlers from the new outpost do not let the shepherds pass with their flock, although the army says they are permitted to cross (who is in charge in the Occupied Territories??). Today the flock went out to graze unhampered.

We were told that 2 jeeps with soldiers were seen driving in the direction of Ibziq. This is never good news. And indeed, apparently they delivered orders to evacuate the site because of planned army maneuvers Monday-Tuesday (November 21-22) including nighttime.

What we saw on the way:

Hamra Checkpoint was active at 10:30 a.m., after having been opened for free traffic for some months.

At the closed Gokhia (agricultural) gate, a new earthen duke has been added beyond the gate.