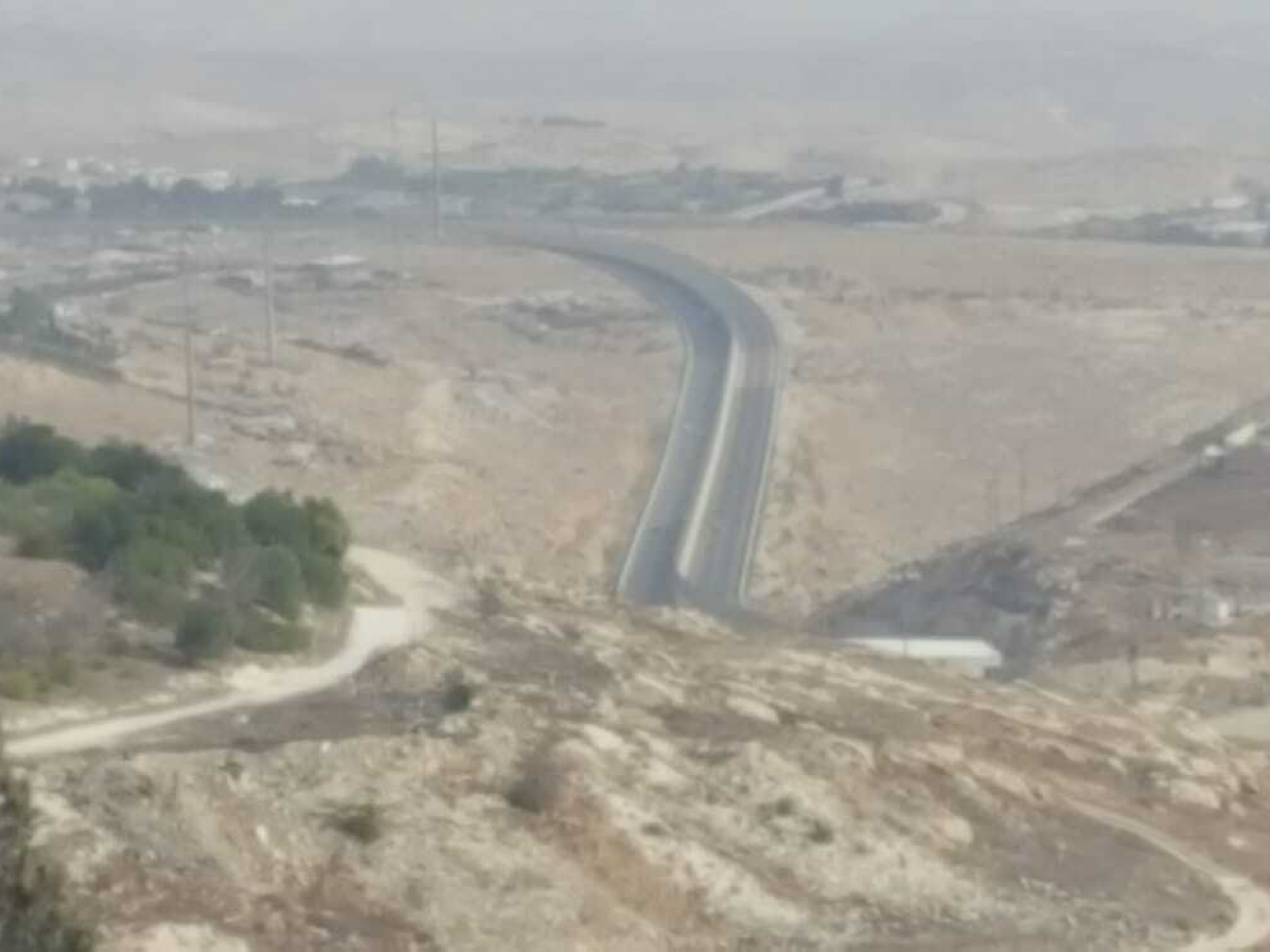 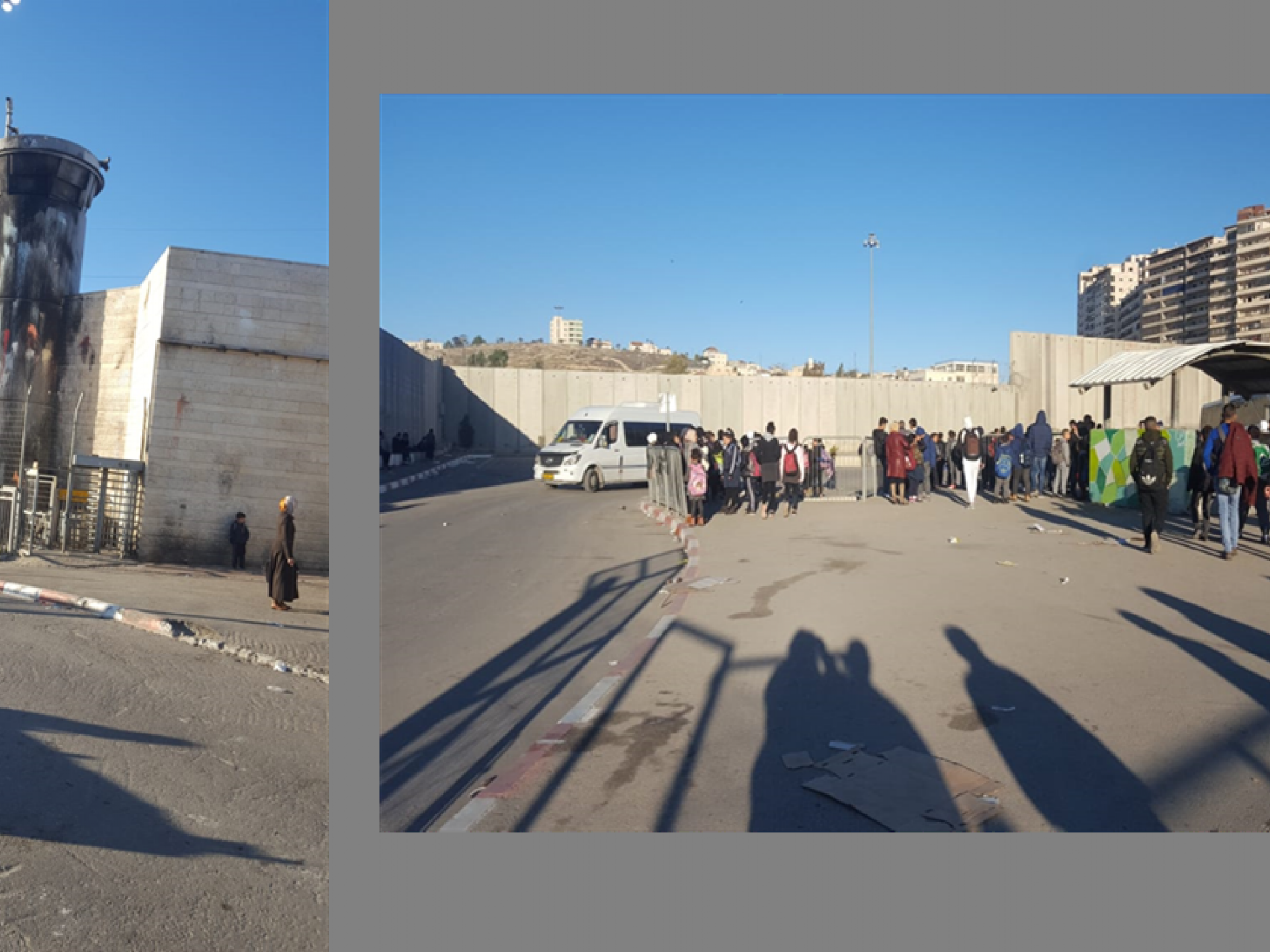 This time we drove in a car from the Abu-Musa transport company.  It was excellent.  The driver, from the Shuafat refugee camp, knew all the checkpoints, the roads and the shortcuts.  He waited until we exited the checkpoints.  We recommend them to Jerusalemites willing to take a shift but who don’t have a car.  You don’t have to pay that day.  The company issues a bill and sends it to our treasurer.

Shuafat camp checkpoint – heavy vehicle traffic toward Jerusalem, a congested traffic jam before the checkpoint.  The pillbox is covered in soot.  Our driver said demonstrations are frequent.

The parking lot used for transporting pupils, a service the municipality pays for, has been enlarged and contains bus stops and even a stone table and benches.  The coordinator from the neighborhood committee says approximately 4,000 pupils study in Jerusalem – they’re transported to school in the morning and returned in the afternoon.  We’re an unusual attraction for the children and youths.  We asked about garbage services in the neighborhood, which had been a problem because the contractors refused to enter the refugee camp.  We were told there’s a new contractor and now the garbage is collected regularly.

The pedestrian checkpoint is filthy.  Only one gate is open but not many people cross on foot.  Most go through in cars.  Three bored female soldiers behind a thick glass window ask us to press our documents to the glass.  There are stairs at the checkpoint exit.  People who aren’t ambulatory can’t use them.  Many personnel at the vehicle checkpoint – security staff and Border Police.  A senior police officer comes over to talk.  He says the situation here has improved thanks to initiatives by the police.  Four community police officers and two investigators are on site.  Activities are conducted in the checkpoint’s rooms/halls (!): theory, Hebrew, information about drugs and crime, art.  We were amazed.  He asks us to contact the police spokesperson to learn about the project.  We tried to ask a couple of people from the refugee camp whether they’re aware of these activities for improving conditions, and the positive involvement of the police and the municipality, but people said they hadn’t heard of it.  We’ll try to find out.

Anata/Al Issawiyya checkpoint on the apartheid highway 4370 (part of the planned eastern ring road) connecting Highway 1 to the Anatot junction on Highway 437 – cf. the interactive map:

This checkpoint has existed since the end of 2018; three weeks ago we added it to our shifts.  At first it was open only a few hours each day.  Today it’s open 24 hours on weekdays.  It’s intended to shorten the trip for residents of the Anatot area settlements who, in order to enter Jerusalem, used to drive to Ma’ale Adumim and from there to Jerusalem as part of the morning traffic jam until they went through the A-Zayem checkpoint at the Zeitim interchange.  We were told at the checkpoint that settlers paid for it, and since they keep the Sabbath it closes on Friday and Saturday.  We found evidence of that in a religious man who refrained from physical contact with us, was unarmed and not in uniform, who said he was a security guard.  Interesting.

As the checkpoint description in the link indicates, Palestinians are not allowed to use it, but travel underneath the checkpoint to a road beyond the wall.  Here are two photos – of the checkpoint and, from Mt. Scopus, at a distance, the road.

We first drove on the Israeli road to Anatot Junction and then returned on the Palestinian road through the outskirts of Anata, to A-Zayyem.

Zeitim checkpoint/Ras Abu Sabitan:  We meet old acquaintances – the cleaner and the drivers who transport workers, waiting on the Azzariyya side.  After our long absence it’s not surprising that the personnel of the command staff of the checkpoint and the DCL has changed.  But as Chana B. advised us, there’s no longer any possibility of connecting with them directly in the event of problems – only with the inaccessible Permits Center at Beit El - nor is there any longer the humanitarian office or the command post of the Jerusalem Envelope military unit.  Nor can the DCL officers be reached by phone, who once could provide answers on the spot.

Zeitim checkpoint, one of the main access checkpoints to Jerusalem, is very congested only in the early morning, and because it’s distant it can be reached only via vehicle, not on foot.  As a major way into the city, the checkpoint has been designed to make access to it difficult.  Two policemen stand at the beginning of the road leading up to it and stop vehicles to inspect drivers’ licenses, vehicle registrations, etc.  It’s not clear why that location was selected, but we saw that elsewhere in the Old City police stop vehicles which appear to belong to Palestinian residents of Jerusalem, and inspect them.  Why not?  They’re obviously second-class residents of Jerusalem, or even worse.

At this hour, approximately 9 AM, there were only about 20 people at the checkpoint, but they had to wait for about 15 minutes to cross because it wasn’t clear whether only one lane was open, or two, and which.  They open in turn, and it’s confusing.  This time two female soldiers, but here a human hand touches the documents.  Equipment:  the revolving gates

get stuck and the light doesn’t change from red to green.  It must be the budget.

A checkpoint on the Eastern Ring Road (4370) opened to traffic at the end of 2018 and connects Route 437 to Route 1 inside Jerusalem. Passing  of Palestinians is prohibited except for blue identity cards. Staffed by Border Police from 5:30 a.m. to evening.