Far’oun, ‘Azzun, follow-up of blocking roads and theft of land by bureaucratic means | Machsomwatch
Skip to main content
Back to reports search page

Far’oun, ‘Azzun, follow-up of blocking roads and theft of land by bureaucratic means 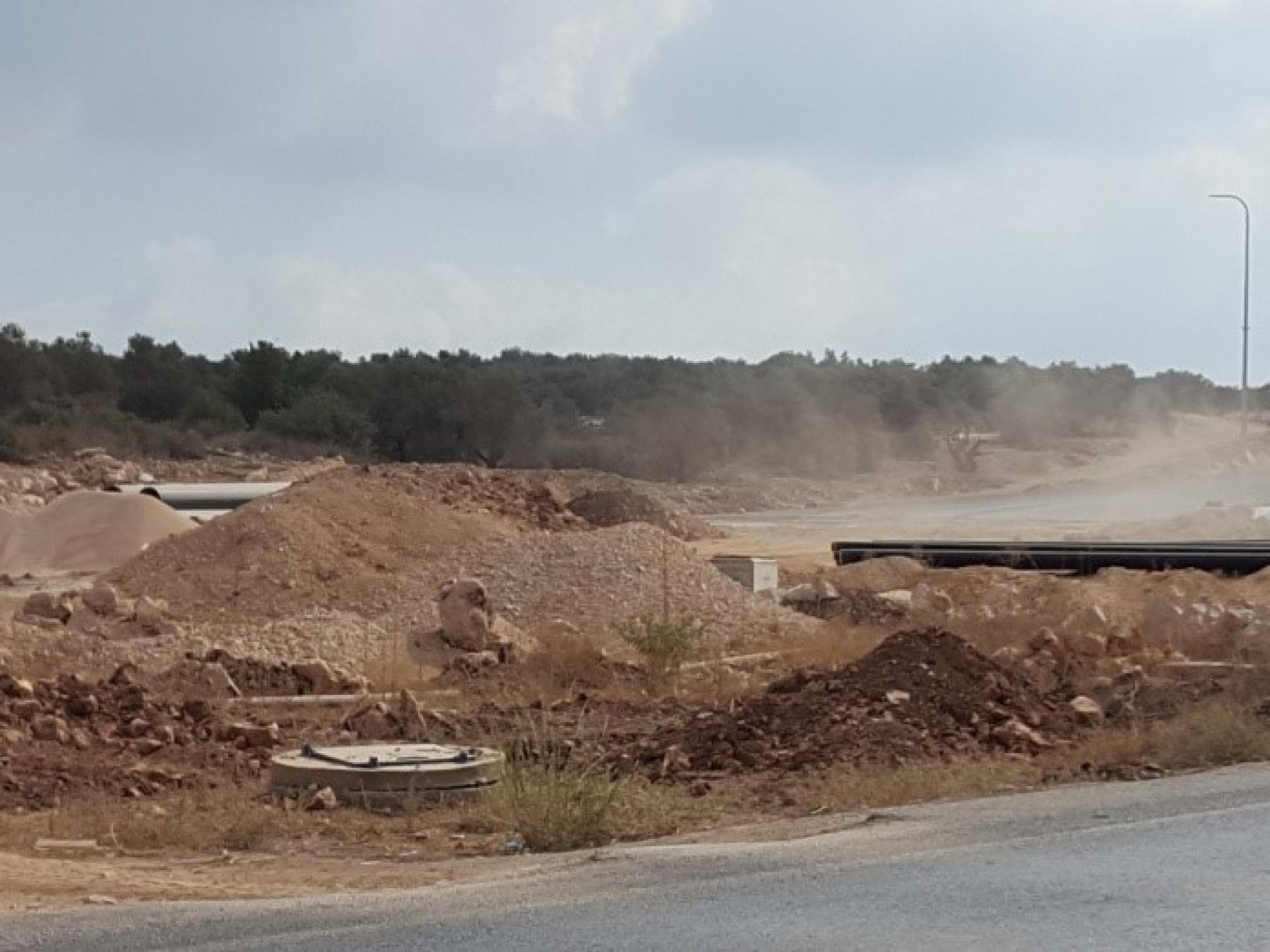 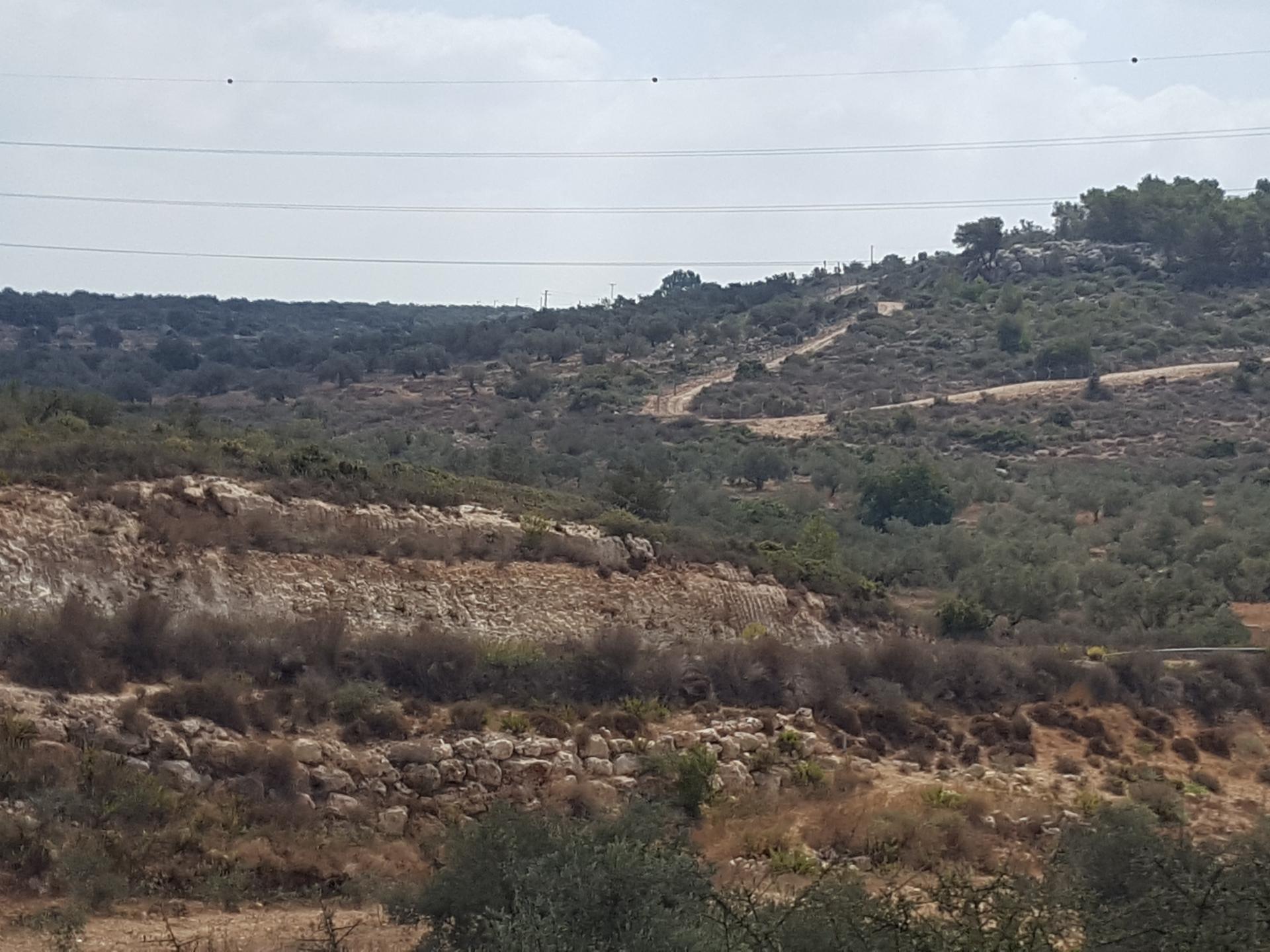 The fence erected on Highway 55.
Photo:
Soshi I 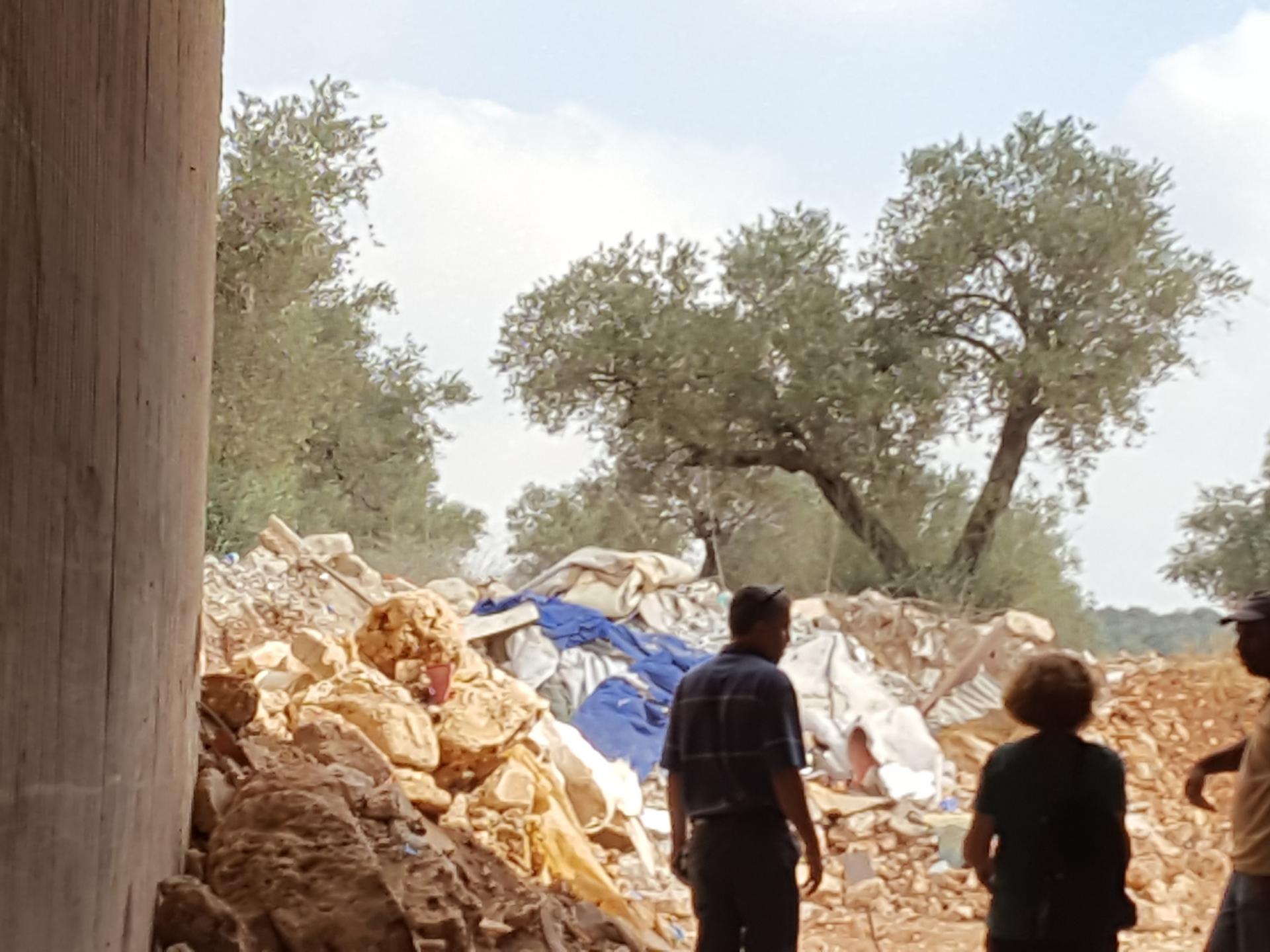 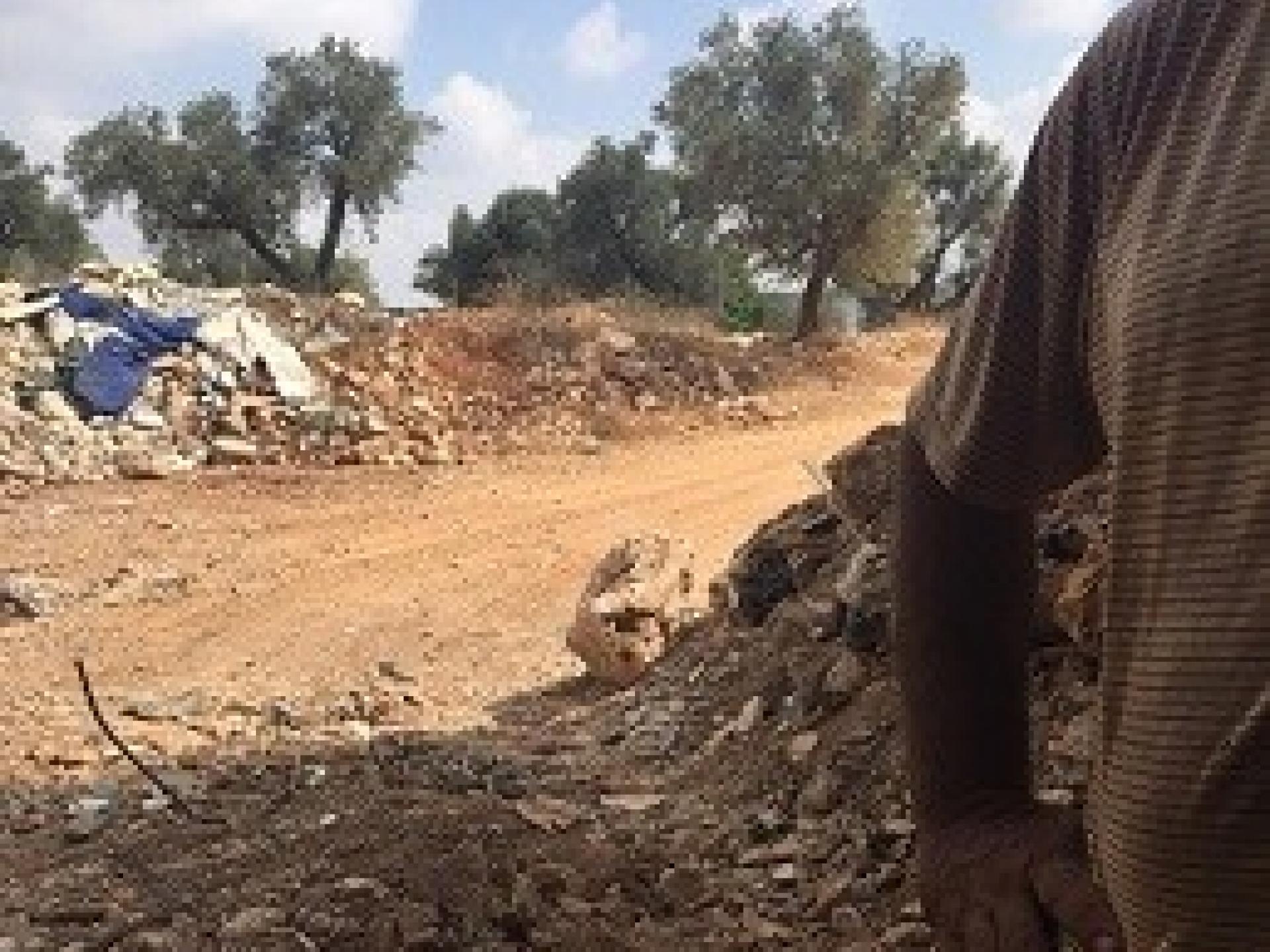 The road that had been blocked was reopened by the farmers.
Photo:
Michal B

We went with a driver to visit ‘Azzun, where we dropped off many parcels of clothing and toys.  Z. seems somewhat disconsolate at the results of his treatments at Hadassah.

The purpose of our visit was to update Karin’s August 10th report about the army’s blocking the route that passes under Highway 55, leading to the agricultural lands north of the road that belong to residents of ‘Azzun.  As a result of the roadblock, residents of Far’oun are unable to access some 1500 dunums of olives, groves and greenhouses (a right turn from ‘Azzun’s main road toward the exit, then a right turn after the mosque).  The road was blocked on 17.7.17.  In addition, Y. updated us (by phone on 13.8) that he removed the roadblock under the bridge on his own initiative.  Soldiers came again and blocked the road with earth and large boulders and he removed them again.  The road is still impassable to vehicles.

When Y. didn’t answer his phone, we went to the municipal building and met S., the head of the municipality, who gladly accompanied us.  S. took us to see another area where a number of unpaved roads used by ‘Azzun farmers were blocked by a fence that was erected along Highway 55.  Now it’s impossible to cross the road other than by a detour which takes hours with agricultural equipment.  The road leads to Ma’aleh Shomron and cuts off many farmers from their land, some 700-1000 dunums.

The unpaved roads and the crossing below Highway 55 were closed about four months ago as collective punishment of the entire locality, because the army claimed children threw stones at vehicles crossing the bridge.  The problem will become much more serious when the olive harvest begins.  Abou70 families (including the head of the municipality) have olive groves to which access is blocked.  The photo of the fence erected on Highway 55 shows the carob trees, whose fruit is ripe but which S. hasn’t picked because of the difficulty accessing the land.  He also told us that many in ‘Azzun haven’t recently received permits, and that every night soldiers enter homes, get adults and children out of bed, interrogate, ask for phone numbers.  Recently things have become worse and the harassment has become more frequent.  ‘Azzun has 12,000 residents, most of them unemployed.  About 1500 residents of ‘Azzun are forbidden to enter Israel.

We made an appointment with S. to receive an update about the permits (crossing permits to agricultural land).  We met at his home.  Last Sunday there was to have been a meeting of municipality staff and the Palestinian liaison office, but it didn’t occur.  He said that the head of the municipality assigned two municipal employees to handle the agricultural permits, and they don’t want to speak to anyone (including Machsom Watch) without “instructions” from the Palestinian DCL.  He said he told Amira Hass, the journalist, about it, and she promised to contact a Palestinian minister she knows to find out what’s going on.

While we spoke, S.’s sister phoned to report the army had arrived at her home.  She lives with two married sons and their families.  We accompanied him to her home and saw two military vehicles, six soldiers and a captain.  He claimed that Palestinians who lack permits to work in Israel use a nearby home to access the road and reach Israel, and they want the family to keep an eye out, prevent that happening and report to the army.  Otherwise, the captain threatened, the family won’t be allowed to access their fields and soldiers will come at night and get the family members out of bed.  We tried to intervene but the assertive officer angrily shut us up.  It’s not clear why it’s the family’s job to ensure that people don’t infiltrate illegally to Israel.  Are they IDF employees?  Isn’t that the army’s job?

“Who are you?” the officer asked.  I showed him the tag and said “Machsom Watch.”  “Oh, yes, you’re the ones who publicize when we don’t open the gate on time.  But we have many things to do…We’re protecting you, and also the Palestinians…there are incidents we must deal with...” he said angrily.  We were glad to hear someone reads our reports…and parted, not amicably.

We returned to S.’s home.  He told us about the problems with permits for ‘Azzun.  In general, it’s the same story Mikki reported on 19.7 regarding Deir el-Ghusun.  The main point is that for the past two months (since the strike ended) the permit-granting process for farmers with land in the seam zone (between the separation fence and the Green line to the west) has become significantly worse.  Many people who received permits in the past are now being refused, and there are endless demands for more documents and more papers that applicants must provide to the DCL before their application will be considered.  Most of the difficulties have to do with the tabu, granting permits only to those whose name appears in the tabu, and not to other family members.  There are all kinds of demands for new tabu documents (for example, because the names aren’t clear), and obtaining a new tabu document is a time-consuming and expensive process.  Other new difficulties in recent months:  an attorney can no longer obtain a tabu document.  Sometimes the application indicates the wrong agricultural gate number and the Palestinian must submit a new application and wait for a new permit.  At Far’oun gate (708), even someone with a permit is not allowed to cross without a donkey or a tractor.  Many can’t even afford to buy a donkey, but they want to reach their land, to cultivate it, irrigate, spray and clear brush.  It’s simply impossible for the elderly.

When S.’s father died he, his two brothers and his father’s two wives inherited only 11 dunums of land.  To divide it among the heirs they must obtain a surveyor, which they can’t afford.  A new application costs NIS100.  An attorney costs an additional NIS150.

In 1997, S. bought a small plot, half a dunum.  Tabu registration cost NIS2500.  The Palestinian Authority charges 1 dinar per square meter.  With such high costs, how can Palestinians who inherited land register them in their name in the tabu?  And when they’re not registered in the tabu, the sovereign doesn’t allow them to access their lands for cultivation.  Another form of land theft.