All five checking stations were open when we arrived at 5:30 a.m. and the lines were relatively short (reaching the kerb by the entrance to the shed), although the progress forward was relatively slow. The  situation remained thus, more or less, throughout  the shift.

The very unpleasant surprise that met us was that in place of the Humanitarian Gate stood a barrier of bars that blocked the path to the inner turnstile and from there to the lane leading to Checking Station #5. It also appeared to us that the turnstile and adjoining small gate (which enables wheelchairs, etc. through) had been moved forward, closer to the new barrier than they had been to the original Humanitarian Gate. We immediately understood that this change was related somehow to the renovations that are beginning on the pedestrian checkpoint (the addition of five more checking stations, we had been told).  Nevertheless, the more people began to gather before the gate that had metamorphosed, overnight, into a static barrier, the more perplexed and anxious people grew. We phoned the DCO line to report the problematic  situation and were told that a soldier was on the way to handle it. 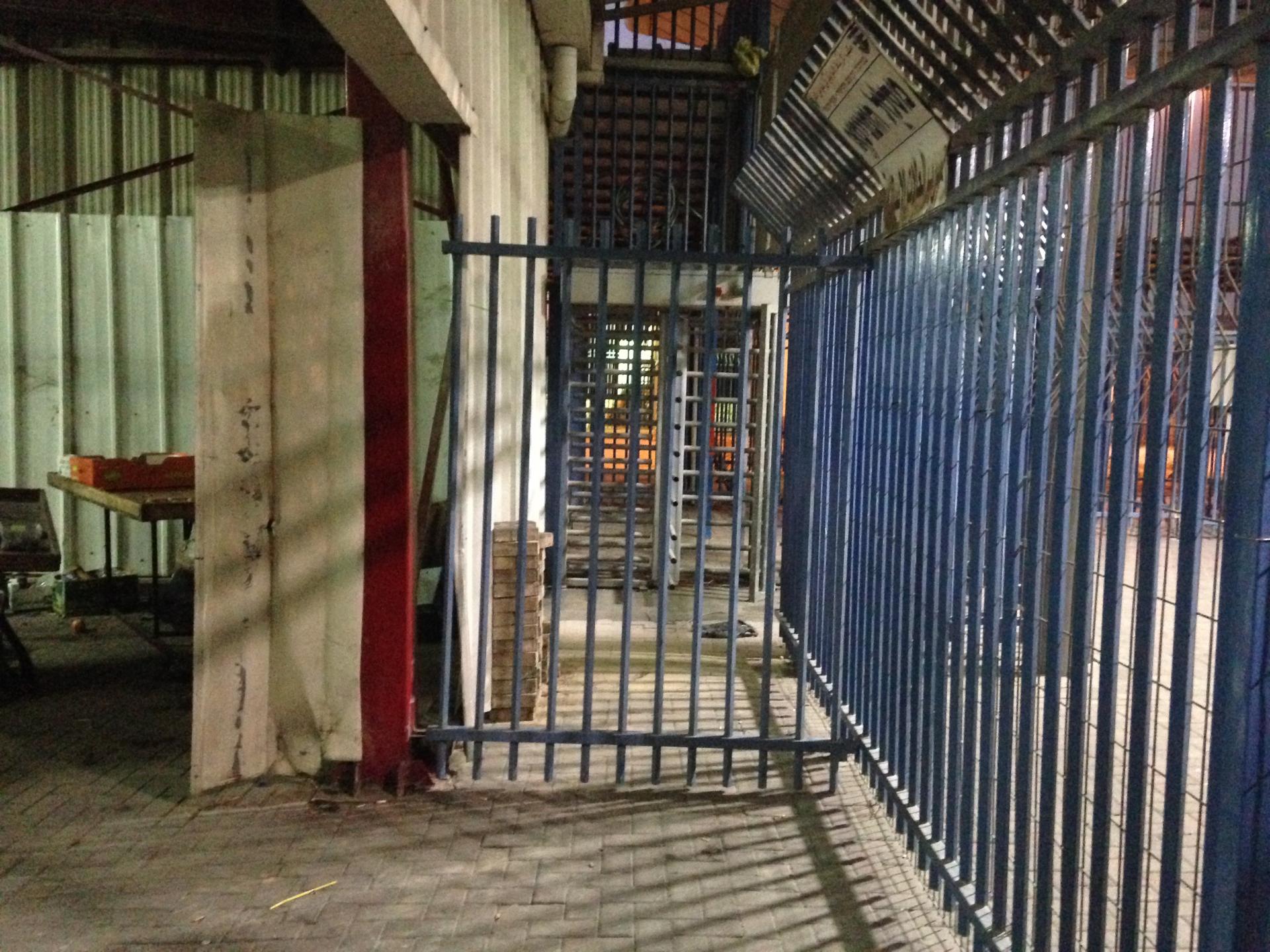 ​The barrier erected in place of the Humanitarian Gate
Photographer:
Ina Friedman

.And indeed, after 6:00 a  Civil Administration officer and two bodyguards arrived. But they appeared to be no less perplexed than we were. One of them mused that perhaps the barrier was erected by mistake by workers the previous day. But in general, despite our attempts to encourage the three gentlemen to tackle the problem – call somewhere, consult with someone, whatever – they behaved as though they were resigned to the new situation and simply sent the people who were waiting for a solution  -- including older women -- to stand on the lines going through the “cages.” As one security guard answered us – pretty cheekily – when we said (based on what we had been told by the Palestinian regulars who use the gate) that yesterday everything was in order and it’s worthwhile clarifying why things had changed: “Yesterday was yesterday, today is today.” Period.

And then, fortunately for the people who avail themselves of the Humanitarian Gate, a loud argument broke out by the entrance to the left cage (ever a magnet for mayhem because of the gap between the bars that practically invites people to jump and push their way into the cage from the side). Apparently because there were women standing at the scene of the dispute and an unpleasant and perhaps violent incident loomed, the policeman who had recently joined the officers and guards took command of the search for a solution to the barrier. For when our attention returned to this part of the shed, we saw him standing behind the turnstile and adjoining gate, speaking on his cell phone. Suddenly the small gate opened (with a key?) and the four men walked through it toward the barrier. Then someone remembered that the turnstile is controlled by the soldier in the “Aquarium,”  and he was ordered to unlock it and leave it open to turn freely. Now only the problem of barrier remained. After some give and take among the men, one of them gently lifted it upward, pushed it gingerly forward, and Voila! The barrier swung open as though it were a replacement gate (though connected only by a thick cord and lacking a lock).

We thanked the policeman, saying, “Way to go for your initiative!” He signaled us as though to say, “Just doing my job.” But after years observing at Qalandiya, we do not take initiative for granted.

This little drama concluded at 6:25. When the Civil Administration officer and the two body guards departed at 7:25, they left the barrier open and the turnstile and adjoining small gate locked. Let’s hope that no one moves the barrier overnight, lest a different  team turn up tomorrow and have no idea how to deal with the situation. 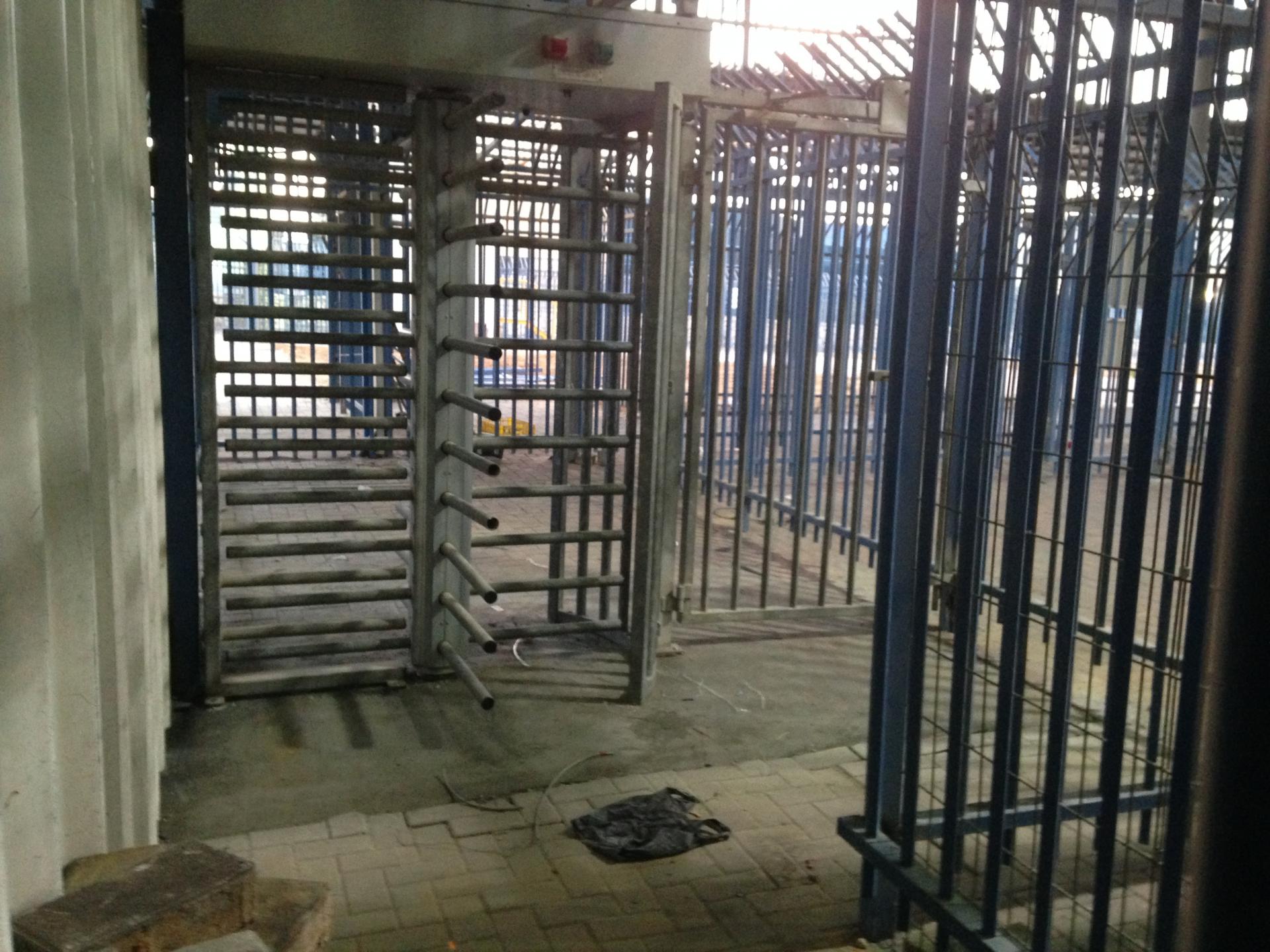 At 7:40, when the lines were contained within the shed, we joined one of them and completed the security check 25 minutes later.