Following our endless verbal and written requests to the DCL, and a letter from the Far’un council to the Palestinian DCL and from there to the Israeli DCL, it has been decided to open Checkpoint 708 gate during Ramadan at 12:00 instead of 16:00.  We went there to confirm.

Leora met a blacklisted Palestinian to have him sign a document from Sylvia’s staff, and visited Z.’s shop to deliver parcels of clothing and household goods.

12:10  We see no soldiers.  I start to call the DCL to determine why.  They promise to find out.  Time passes, no soldiers.  Today it is very hot.

12:25  A Hummer passes on the security road without stopping.

I continue calling the DCL and the crossings officer. They’re looking into it.  They’re always looking into it…without results.  Who even gives a damn?

They’re on their way.  What’s the hurry?  Let them wait!

12:44  Another military Hummer arrives, and this one stops.  The Palestinians who’d found some shade beyond the hill begin to approach the fence. 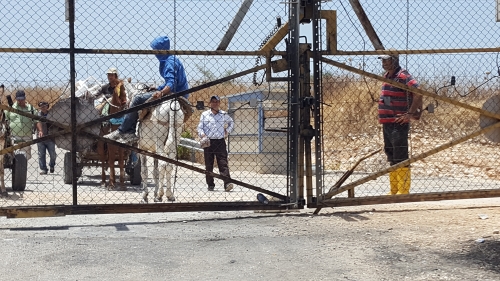 12:48  The gate finally opens and 11 Palestinians, plus carts, come through, including our acquaintance S.

I’m notified by the crossings officer that the gate opened at 12:27.

But he’s not here, and I am.  The reports he receives from the military unit aren’t correct, and I’ve already mentioned this in the past. I told him that he is constantly being given false information, and he should investigate whether it’s correct.  He doesn’t respond.

The delays in opening gate 708 aren’t new. I’ve been seeing them for months.

In the afternoon of June 7 the gate opened at 18:06 instead of 16:00 – two hours and six minutes late.  So what?  The Palestinians can wait.  Ramadan started the previous day, and some of them are surely fasting.  It’s not enough that they’re working in the fields in the severe heat, they also have to wait hours for the gate to open while the soldiers report to the DCL that they’re on their way…  And the delay? A security incident. That’s the usual response.

That’s the humiliating daily reality. The forces of the occupation.

We drive to S.’s home and receive the names of people not permitted to access their lands, to check them with the DCL.

The issue of dumping refuse that has been turned over to Yesh Din – the contractor is now dumping it elsewhere. There are still piles of construction rubble on Far’un’s agricultural land.  Maysun, the Yesh Din representative who had viewed the site, promised to report the matter to the Ministry of the Environment.