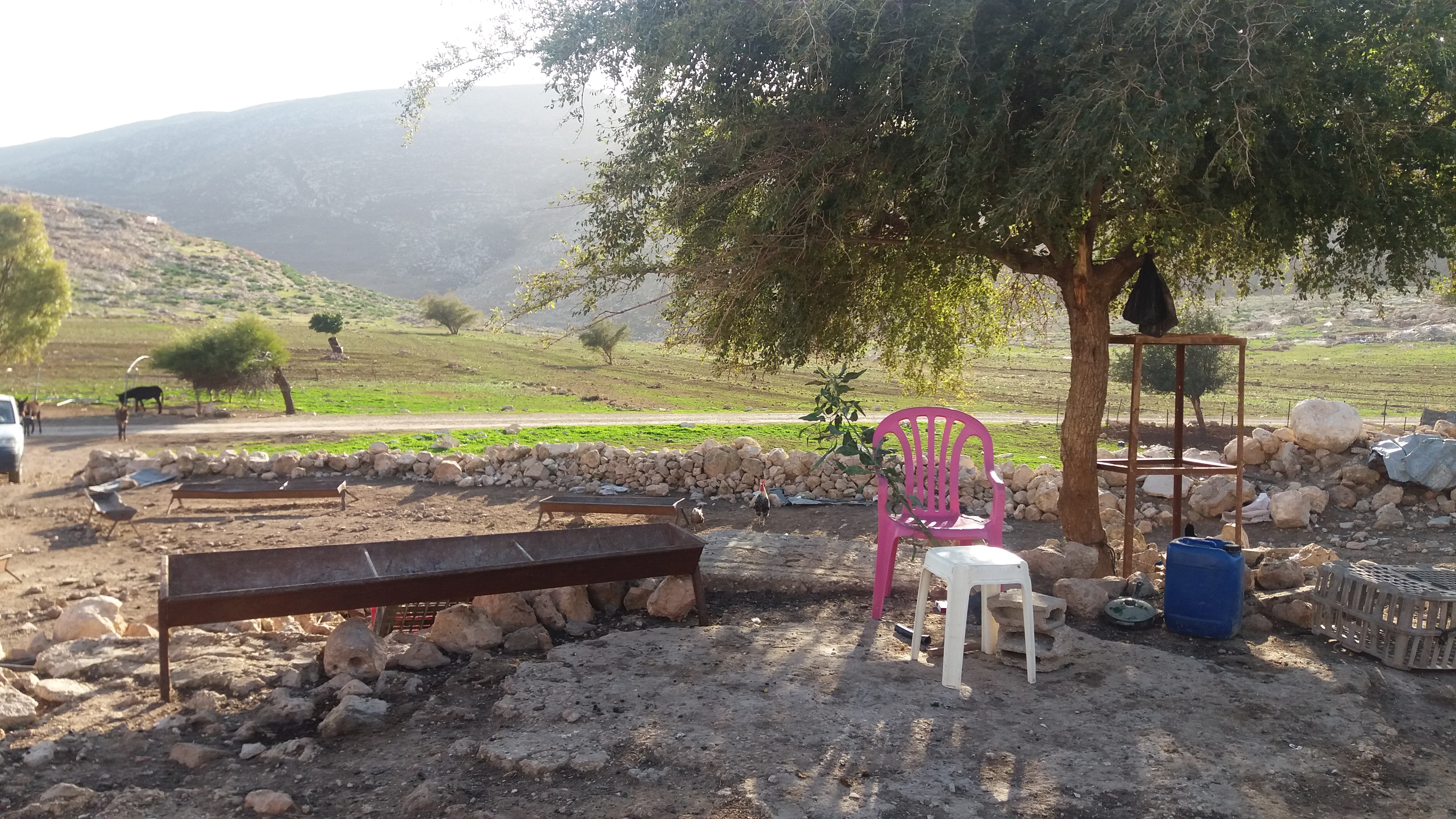 We were particularly interested in going to Khirbet Tana after I read in Al Ittihad on Wednesday, 3.1.17, about demolitions soldiers carried out there.

Khirbet Tana is located south of Nablus, east of Beit Furik.  It is surrounded by three settlements – Itamar, Gitit and Mehora.  Its main entrance is from the direction of Mehora, in the Jordan Valley, a distance of about one kilometer.  But the army forbids the inhabitants to use that road, and erected a gate there for military purposes.  So they’re forced to use the road from Beit Furik, a distance of five kilometers.

There are no buildings in Khirbet Tana.  The inhabitants live in tents and in caves, and make a living from raising sheep and cattle.  In the winter they grow grain. 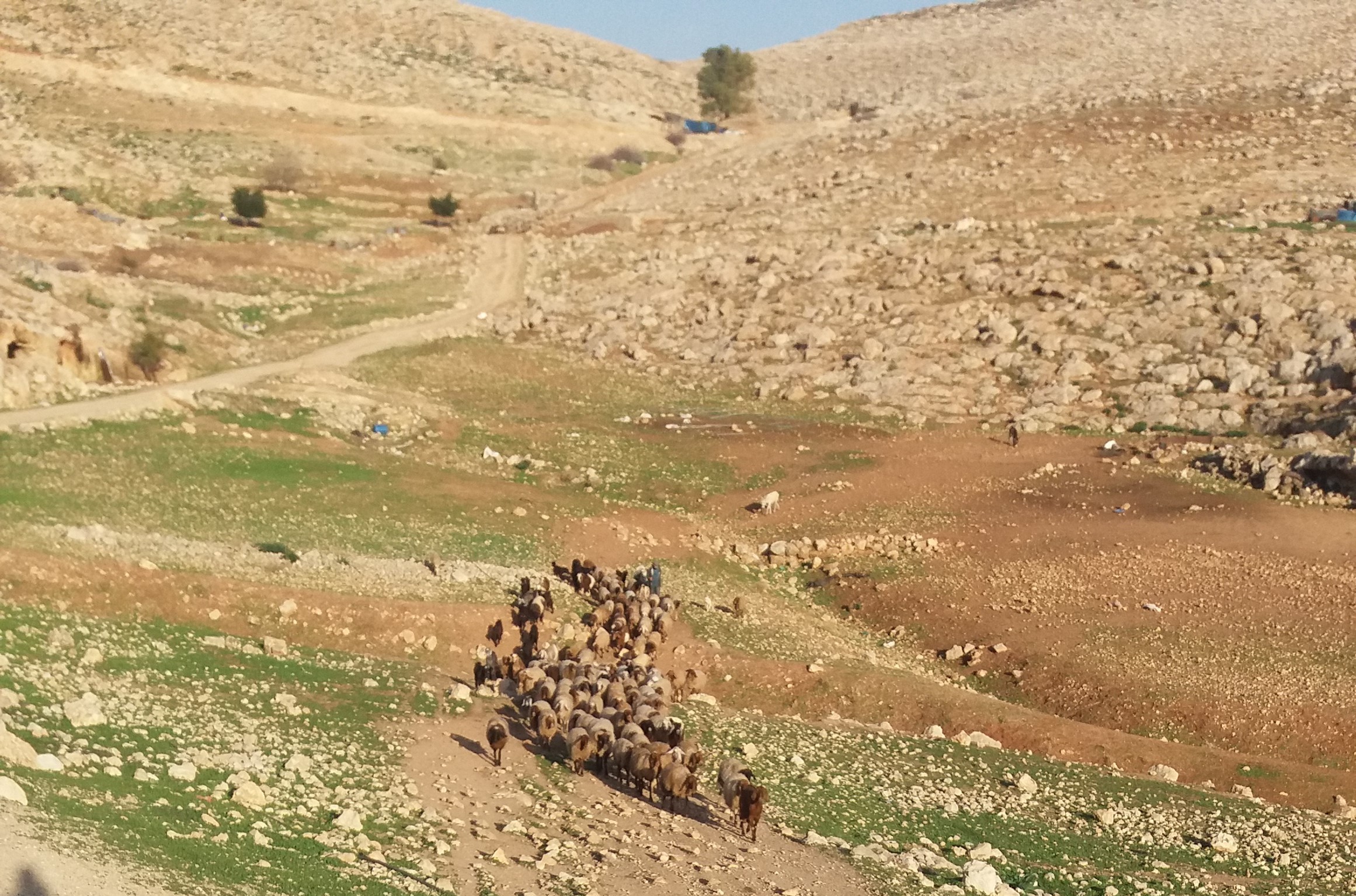 Furik.  Of course, the army came and demolished the structure.  But the inhabitants rebuilt it with the assistance of, and contributions from, the EU’s Humanitarian Assistance Office.  The work was carried out by the Italian GVC organization.

They have two springs from which they draw water which they transport in tankers.

On Tuesday, January 3, soldiers accompanied by tractors arrived and demolished 13 tents, and tried to destroy the caves in which they live, but weren’t successful.  But they did confiscate their water tankers. 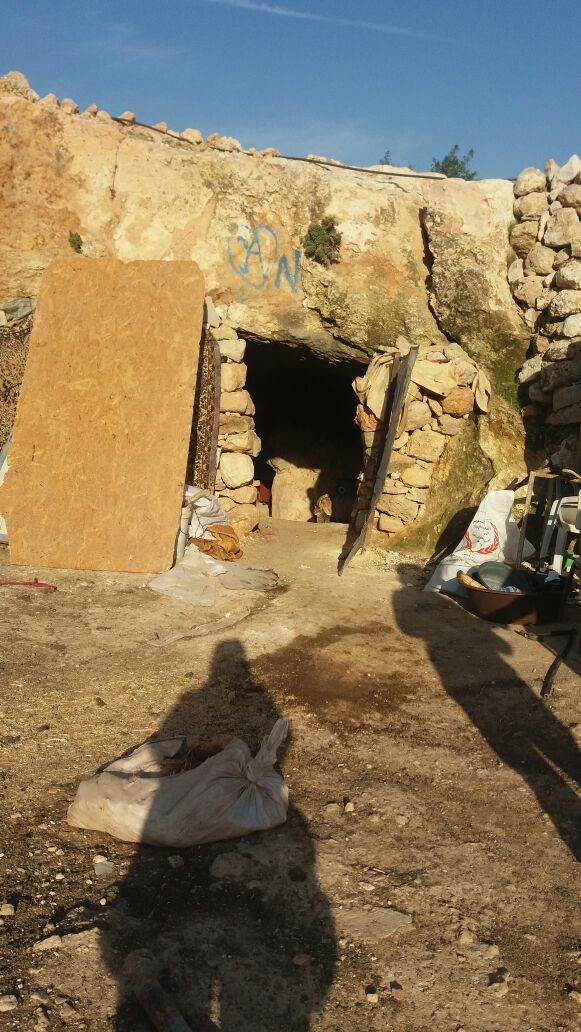 From time to time settlers from Itamar come to graze their sheep in the area and harass them.

That’s what we were told by M., a resident.  “The goal of the army is to chase us off our land.  We’re here to guard the land our fathers and grandfathers took care of for generations.  We have a kushan proving the land is registered in our name and we won’t abandon it, nor will our children…”

16:20  We left.  On our way back the Beit Furik checkpoint was manned, as was Huwwara checkpoint.  It was the time people return home so it created a traffic jam.

17:00  Huwwara.  A military vehicle, soldiers alongside it, was parked beside the shops on the main road, where there was heavy traffic of military vehicles.  Three military ambulances drove by, travelling in the direction of the checkpoint.

South of Nablus, at junction of Routes 57/557, between settlements of Bracha and Itamar. One of three checkpoints that close off Nablus, together with Beit Furik and Beit Iba.

Click here to watch a video about Huwwara checkpoint.