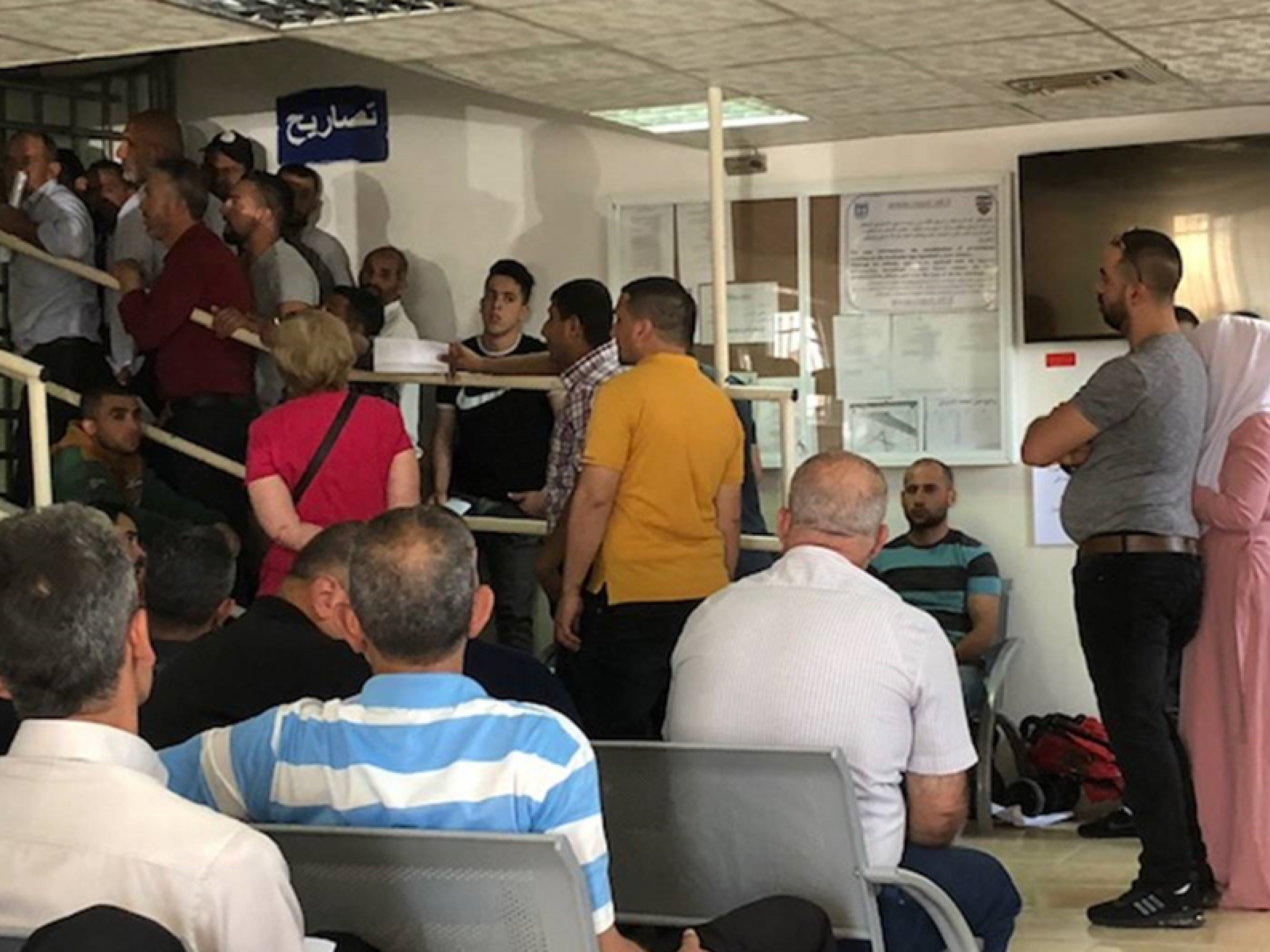 Etzion DCO: many people waiting for the magnetic card but having another endless problems 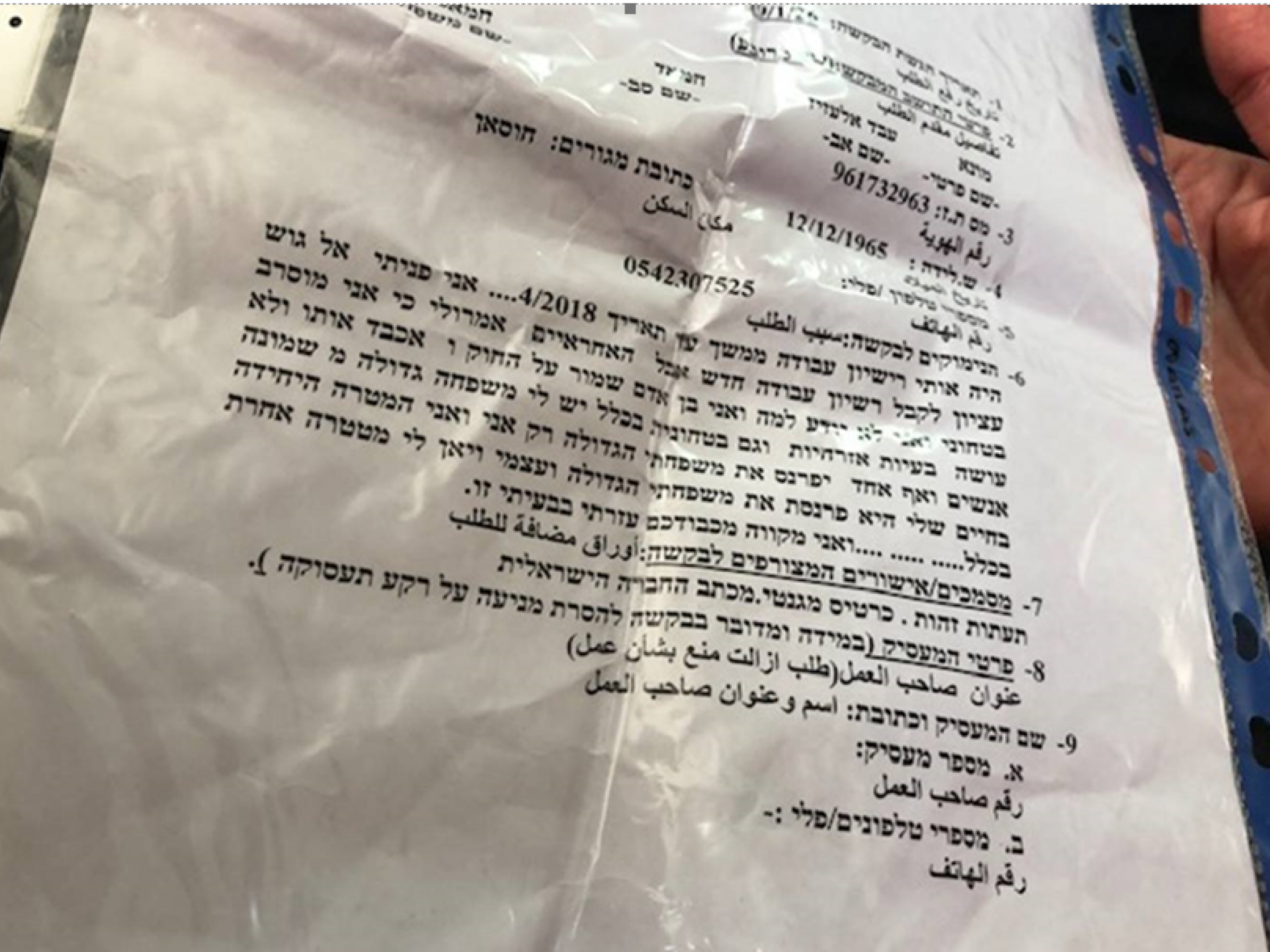 Etzion DCO: a man showed us a statement written almost in Hebrew, and whoever had written this confused the genders so it took us a while to realized that it concerned his wife. 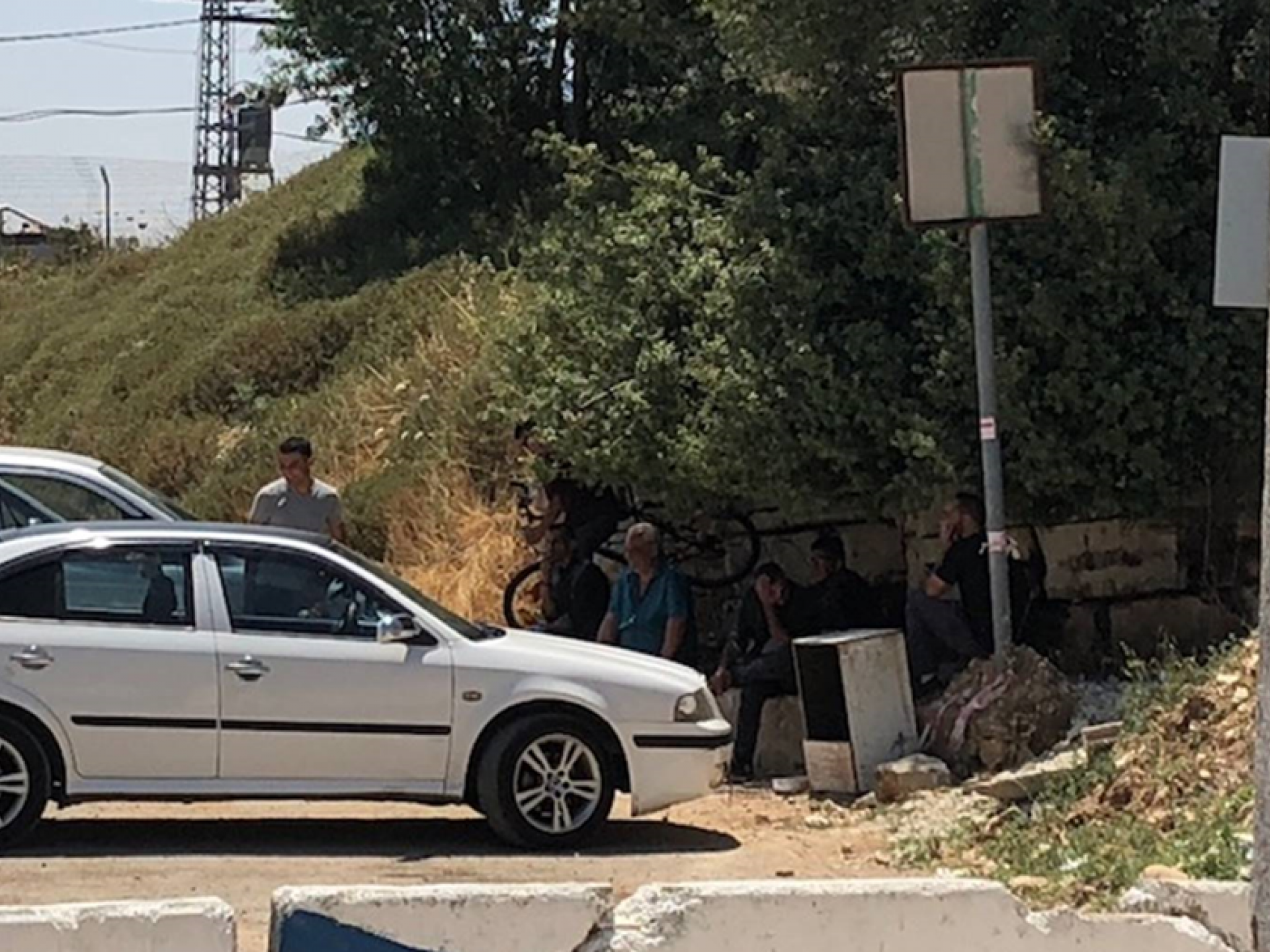 Etzion DCO: These people were waiting out in the shade as evidently they had a long wait ahead of them and it was pleasanter there.

We arrived to find that the parking lot was packed with cars. Inside the shed were about 70-80 people and outside sitting under the little shade that there is and inside the courtyard at least another 40. The turnstile was so packed that it reminded me of Qalandiya and once or twice a fight nearly broke out.  During the entire time that we were there people kept coming up to us with various problems and questions and even at the end of the shift when we went outside we were stopped by more Palestinians and as we drove off were stopped again. We do not know if the large crowd was because of  Ramadan, Shavuot?
Many people waiting for  he magnetic card but having another  problems without end.

The woman soldier eventually started calling out names and t! hen numbers and after about half an hour things quietened down to some extent but the amount of people remained constant. It looked as if people who had appointments at hospitals to go through ahead of others. This included one man whose daughter was  pregnant and need ed to go to hospital with someone to accompany her.

So as not to keep repeating the details,  to some of those who had problems we gave Sylvie’s number. Sometimes I think that the women of Machsomwatch are thought to be cloned as over and over we were asked if we were Sylvie whose fame and that of her team has evidently spread. We warned all not to go to private lawyers but to first contact Sylvie or Hamies in Hebron who only takes 50 shekel. People were also told to make sure that they spoke to our Sylvia and not to another lawyer by the same name in Hebron.

One man had a paper showing that he was no longer forbidden but for some reason it still appeared on the computer. Shlomiet explained that it sometimes took a month or two for the computer to be updated. His son had  been in jail and his previous permit had been taken from him. He had contacted the Palestinian Authority who told him that he was now clean but he had even been refused a magnetic card. He has twice already been sent from pillar to post. We have never heard of anyone being refused a magnetic card before. He had been there again in Ramadan.  We told him to try again. Happily enough he tried once more and came out with a permit and a magnetic car! d.

A contractor had arrived at Meitar checkpoint and, Jack Robinson, he had become “prevented.” He even had permission to sleep in Israel but another man who was working with him was there illegally and he had been accused of having helped him although he had nothing to do with it. He was referred to Hamies in Hebron.

Another man whose belongings were still in the criminal  prison in Ramle and had not been returned to him when released. Of course he cannot go there himself. He had been caught illegally in Israel and had been three weeks in prison. He was let out on bail.  He has to appear in court in three weeks’ time. We told him to speak to Sylvie.

A well spoken man told us that he has a big business and has worked in Israel for     12   years and b! efore that for 17. He does not know what the problem is as he has never been in jail nor has anyone in his family. Shlomiet spoke to Amira Hass who knows him and has been in his house. She said she would be overseas for a week but would contact him when she came back.

One man had had a family problem with his wife who had complained about him. They had now reconciled but he still has a problem and has been told that he had to speak to a policeman.  But there is  no policeman of course and he will have to keep trying.

One man had been prevented until 2019 and though it had ended it had been extended for another year. We told him to speak to Sylvia.

A complaint from a man who has been “refused” for a period of three years. The problem is that the poli! ce have come to his house at least four times to search and, of course, only in the early hours of the morning. Last night they had arrived at 1.30 and given him an order to appear at the Shabak this morning at 10.00. He had been waiting but no one answered the bell. Shlomiet eventually went and spoke to the ………..    She was told that there was no way out but to wait until 5pm. To ring the shabak every half an hour and if not he would have to come back the next day.  At the same time there were another four men there who did not look as if they had had more luck than he was having.