evidently opened on time. When we arrived (a little late, at 04:05 instead of 04:00) dozens of people had already passed through the checkpoint. At 04:10 the turnstiles at the entrance closed for several minutes. We have no idea why they needed to close so soon after opening.

The entire time we were there, we didn't see anyone climbing over the barriers between the lines. There was no crowding or pressure.

The women whom we timed got through the checkpoint in 5-6 minutes; men took 14-17 minutes, about the same throughout all the time we observed.

There is still no separate route for people returning to Palestinian territory.

A few weeks ago we reported on laborers who were paying a contractor significant sums of money every month in order to get work permits. This time a small group of people (with work permits) spoke to us after they had passed through the checkpoint. They asked if it was true that it was possible to buy permits for money; they hadn't known about the option. So clearly some workers are still employed in a legal, fair way. We explained that we don't have a way to get around security blacklisting; what some people pay for is a letter from an employer, that enables them to apply for a permit.

The big innovation this time was an electronic sign with colorful messages alternating between English, Hebrew, and Arabic. In Hebrew it said, (in red) Welcome, then, (in green) to the terminal, then Shaar Efraim, then Happy Purim. We didn't see any happy workers under it.

Unfortunately, pictures didn't manage to register the messages, just the existence of the bright new sign. Who is it intended for? Do other checkpoints have the same thing? Pretending that this is a normal border crossing? 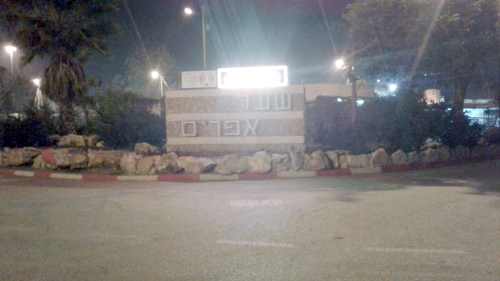