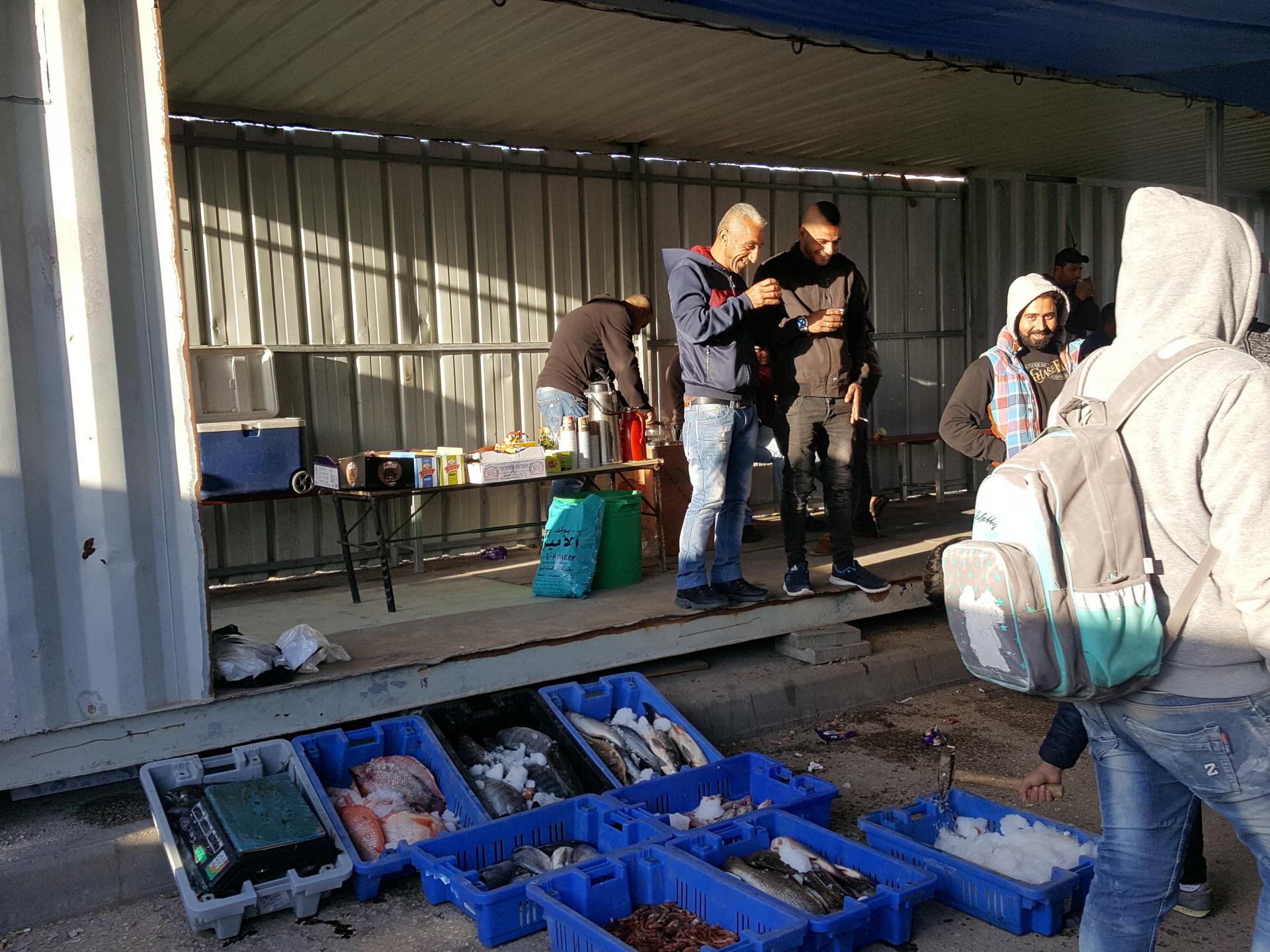 There were road repairs being done and lights were being repaired along the road.  Two women were sitting under the shelter on a bench without any seat waiting for a ride that arrived immediately.  A tractor loaded with various goods crossed to the West bank.  There was very little traffic in both directions as usual.  A young Palestinian was cleaning up the checkpoint.  It appears that his job is to clean up the area between the two fences, but outside it is not important.  Two military policemen approached us who did not know that it is permitted to take pictures and thought that we had to keep far away from the gate.  They are new here.  We asked if school children crossed today.  They did not know, and were unaware and did not care that schools in the West Bank were on strike today.

Anna noticed that the sign for supervision of flora and fauna near the truck crossing lists the goods that are forbidden to bring across only in Hebrew.  The general description is written only in English and Arabic.

The parking lot was full and unusually disorderly.  Two Palestinian attendants were standing at the entrance and did not prevent people from parking on the sides of the road.  Many people were coming back from work at this hour.  The two containers that were placed in the parking lot until permanent structures are built are full of activity.  One has been converted into a prayer corner, and the other which has had one of the walls removed has been converted into two snack bars and a fish market (see photo).  A blue plastic sheet has been erected between the two sheds.  People complained that the rain comes through holes in the plastic.  They also complained that the checkpoint managers make it difficult for the owners of the booths on the Palestinian side, but allow the kiosk located in the sleeve

on the seamline zone side belonging to the settler to continue to operate.  No one mentioned Trumps speech yesterday about the United States recognizing Jerusalem as the capital of Israel, and we did not ask people about it.  One person spoke about the shooting at an Israeli bus near Emricha.

He explained that on the other side of the fence near Emricha (see report from November 22nd) there is concertina barbed wire stretching from Emricha all the way to the Mevo Dotan Checkpoint that has been there for a year.  We drove to see this fence that we had never noticed, and only saw some small sections of wire.  The fence had rusted and was the same color as the ground.  Soldiers were standing near the fence.  Perhaps they were stationed there because of the shooting yesterday.

Cars were driving in both directions without being checked, but they were being held up by the concrete blocks that left only one lane of traffic open.
16:00 – We joined the drivers who were returning home after driving people from the checkpoint.