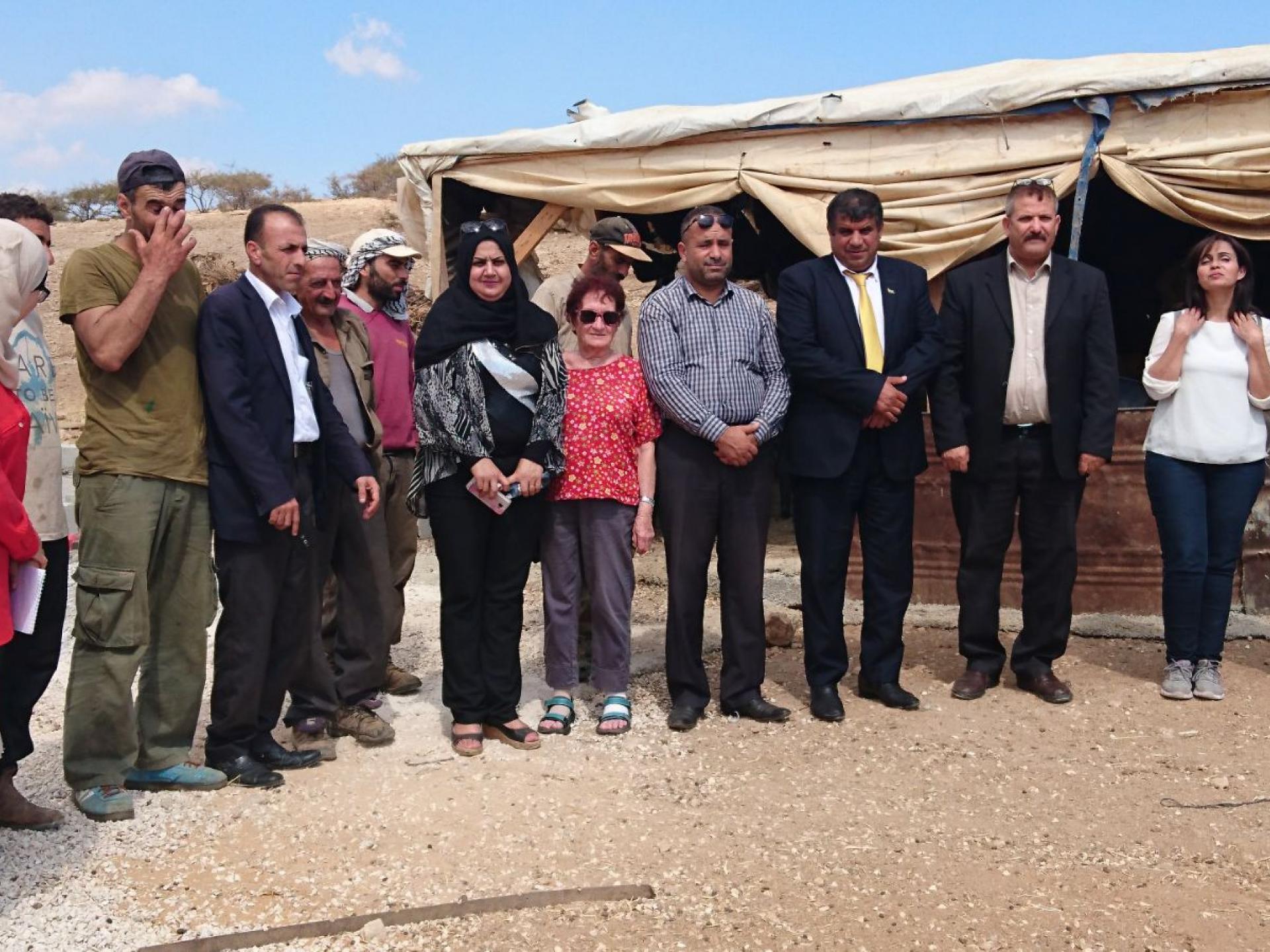 Change of personnel in the regional authority of the Shepherds, in the Northern Jordan Valley

Araf Dargma, who served as the mukhtar (mayor) of the shepherds' community and who served as the Liaison with the Palestinian Authority since 2009 was fired from his job. Abu Sakker Bashrat was appointed in his place. He works together with a council of 8 members who represent the families. Araf Dargma worked by himself with no transparency and retained all authority for himself and no one knew what he was doing. Rumors of corruption spread. On the other hand, Abu Saker distributed jobs and responsibilities to all eight members of the council and encouraged them to take initiative. We met Mahdi Dargma, one of the eight members of the council, together with the person who is responsible for the regional authorities. They were going from one tent to another inquiring who needed solar water heaters that were being given out by the Palestinian Authority. Everyone, including Abu Sakker, works on a volunteer basis. There will definitely not be any more problems with taking women and children to the beach in the future.

Visit of Representatives of the Palestinian Authority at Khalat Makhul

While we were visiting residents of Khalat Makhul a delegation of the Palestinian Authority happened to arrive in two cars.  The delegation included three representatives from the Foreign Ministry in Ramallah, the new regional mayor Muataz who is responsible for security in the area of Tubas, a woman representative from the ecology department and others. Burhan and Abu Salah representated the residents of Khalat Makhul.  Muataz, whom I visited previously about taking people to the beach, remembered me, and the discussion began with much praise for Machsom Watch and its activities on the part of the representatives of the Foreign Ministry and the mayor as well.

The representative from the Foreign Ministry promised to involve foreign diplomats, particularly Americans, regarding the threat of house demolitions in Khalat Makhul.   He promised to bring representatives from the American Consulate next week.   The mayor encouraged the people not to give up and  promised material aid in case homes were demolished.

Beginning the Implementation of the "Agreement" reached through Attorney Taufik Jabarin

I read about the house demolitions in Khalat Makhul on social TV.   Attorney Jabarin submitted the petition and succeeded in convincing the civil authorities to form a committee that would allow local residents to present legitimization of the existing buildings. Even if they decide to reject the request, the demolition will be postponed for 45 days – allowing them time to take the matter to court.

We met a certified surveyor and his helper who was hired by Jabarin who were measuring and photographing all the buildings belonging to the families who live there.

There were two soldiers guarding the junction at Za'atra – Tapuach Junction.

There was no activity at the Ma'aleh Ephraim checkpoint or anywhere else today.  Today is the first day of the Sukkot holiday and most of the soldiers are on leave. The roads are empty.