Meetings with two brave Palestinians who dare to express their opinions loudly.

I had fixed an appointment with S. from Fara’un with whom the relations had been continuous but have lately been severed somewhat.  The Far’un CP 708 is open 3 days a week (Sunday, Tuesday, Thursday), three times a day, for a quarter of an hour each time (8:00, 12:00, 16:00). The soldiers are in the habit of being late, and the farmers have to wait in the heat or in the cold for long hours.

In 2009, following a petition by the inhabitants of Far’un, the High Court of Justice instructed to change the route of the fence. In May 2011 work began, and in 2013 it was finished. As a result of the displacement of the fence, 1400 dunams are located within the region of the village, and to reach 2600 dunams the inhabitants have to pass by CP Fara’un 708.

Two persons deal with requests for permits at the Baladiya – G. and S.

Those two have a job somewhere else and their function at the Baladiya is probably  perfomed on a voluntary basis, which is why they are busy and are prepared to meet our members (Diane) in the evening, after 18:00, or on Saturdays.

Since April 2018 over 200 requests have been submitted. Three answers were received. In one of them the petitioner was asked to distribute the land to his heirs and to register it at the land registry. By the Center for the Defenceof the Individual in Jerusalem they were told not to divide their lands.

Thus a kind of political game is being played between the two DCOs and in the meantime the Palestinians wait to receive their permits and do not cultivate their lands.

When the State of Israel was established, Arabs who were Israeli citizens, were land owners at the west bank. As they were unable to cultivate them they used to rent them out. Everybody knew everybody and didn’t need receipts.

Years later when the land owner died the State executor took the lands and rented them out to Palestinians. When the tenant died his son was requested to pay enormous sums for all the years his father rented the land (without receipts).

S. is the unofficial director of Far’un. Everybody turns to him with each and every problem. He is a household member at the Israeli DCO because he takes care of everybody’s problems. But S. got tired and his friends disappointed him. When he declared a strike only few people arrived at the fence (we were there with him…). When there was a meeting with the representatives of the Palestininan DCO and Israeli officers, they remained silent.  He stopped informing me about delays in the opening of the gate and stopped “managing” the affairs of Far’un.

But there is also a ray of light in his life – his prevention order was removed and he even doesn’t know why. For many years the General Security Service has imposed preventive measures on him, and today he can go anywhere in Israel except to Elath (why?). His son who lives at Far’un is registered in his mother’s identity card. His mother lives in Kalanssua. The son was hospitalized last week at the Meir Hospital after a road accident, and S. visited him every day.

I learned yesterday  that at Far’un there are 3 gates

in the fence, and all three are CP 708. When the soldiers arrive they open all three gates. This is one of the three which I haven’t known.

An elderly woman who has worked at the piece of land belonging to her family, approaches the gate. She pleaded that her son should get a permit to pass by the CP. The young man sits at home doing nothing while she is forced to cultivate the family plot. 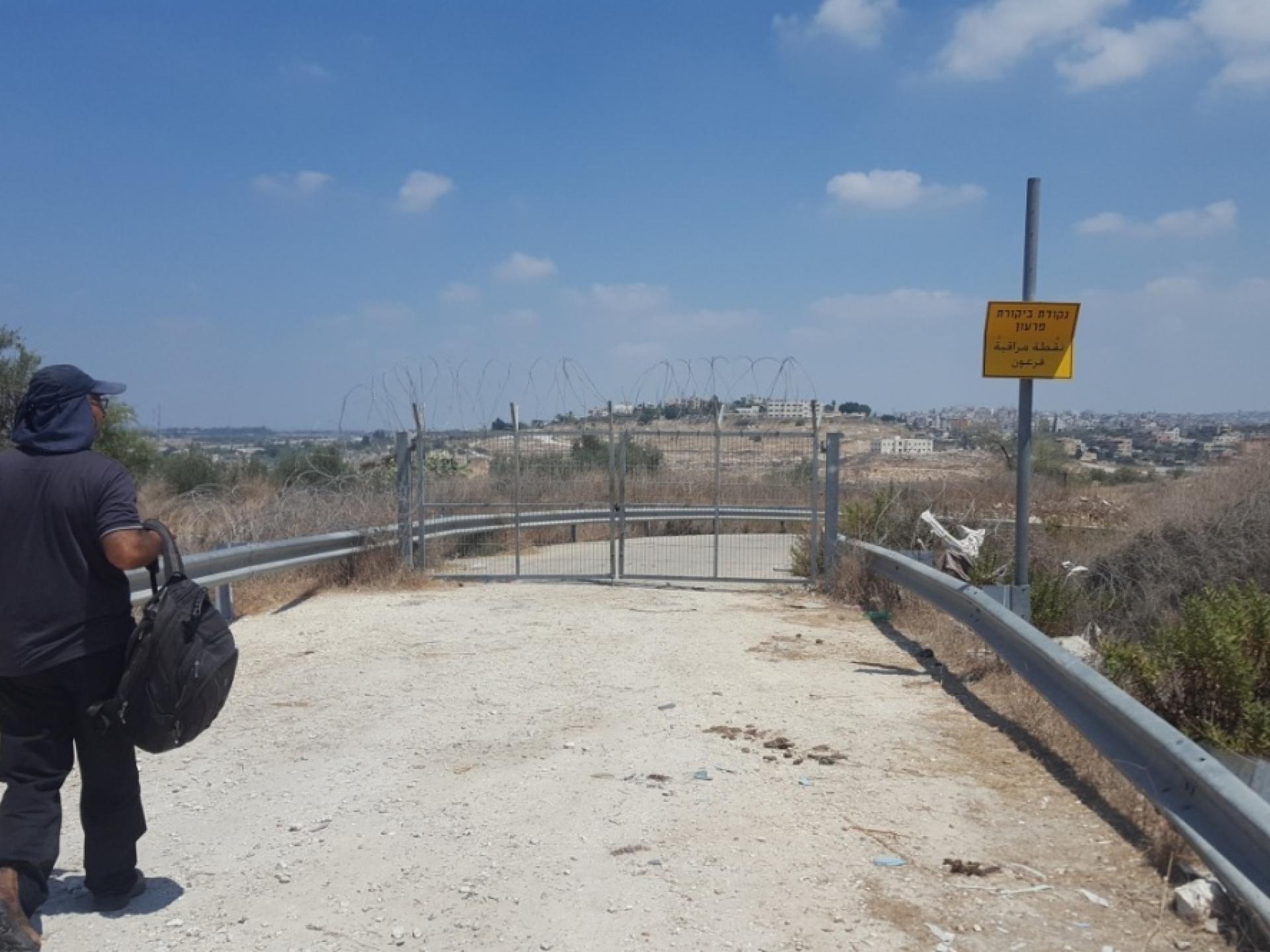 One of the three Far'un gates
Photo:
Shoshi Anbar 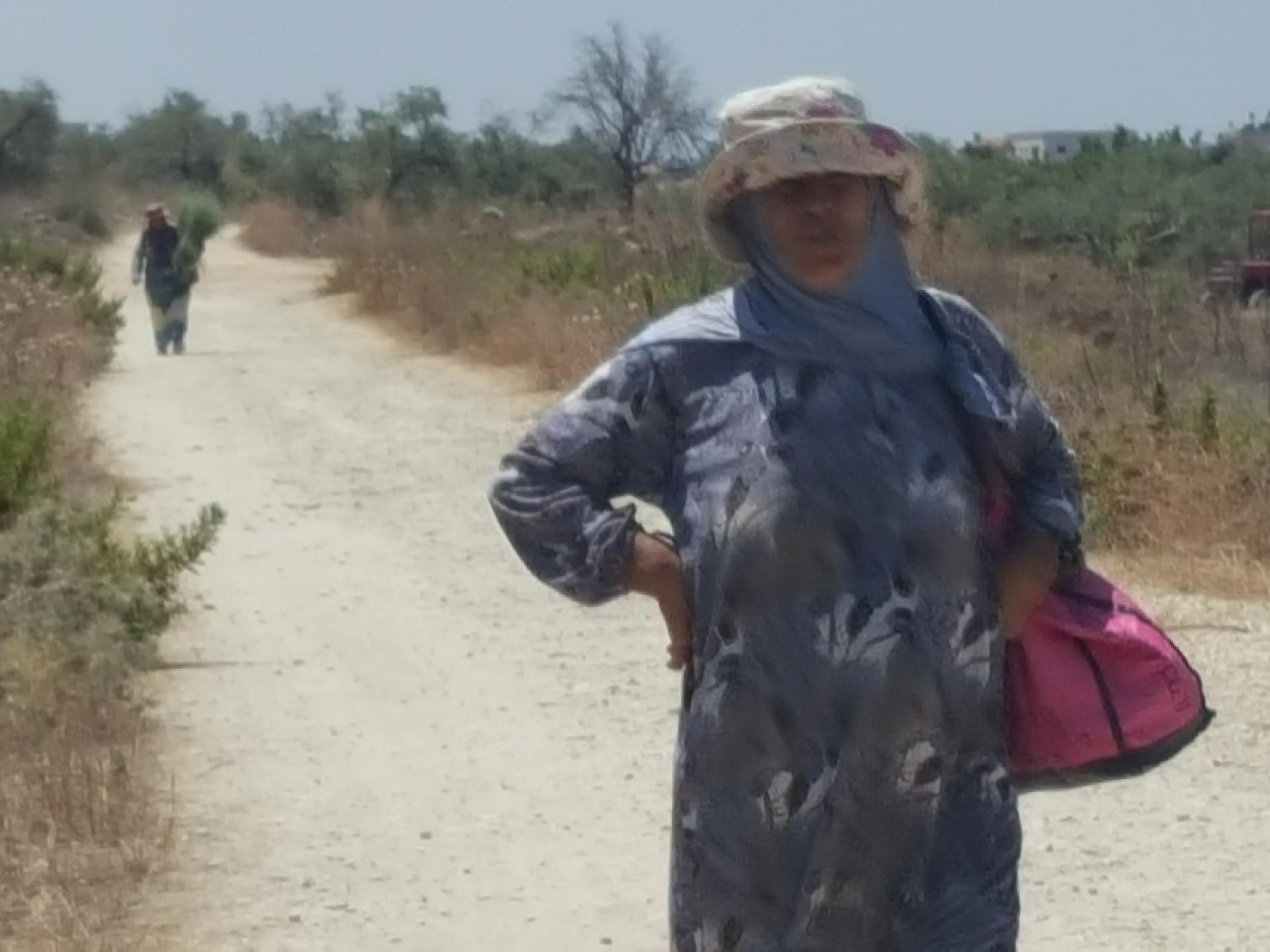 We parted from S. and drove to the Hable CP no. 1393. The gate was opened on time. The traffic was sparse and the checking wasn’t performed in the usual booth but under the shed. Whoever arrived passed immediately. There were hardly any vehicles.

During the school holidays the children join in to help

Wounded horses from Jaljuliya and Qalqiliya arrive for treatment by the Veterinary doctor at Hable. The wound on the horse’s leg is an open one and looks very serious. We wish the horse well. 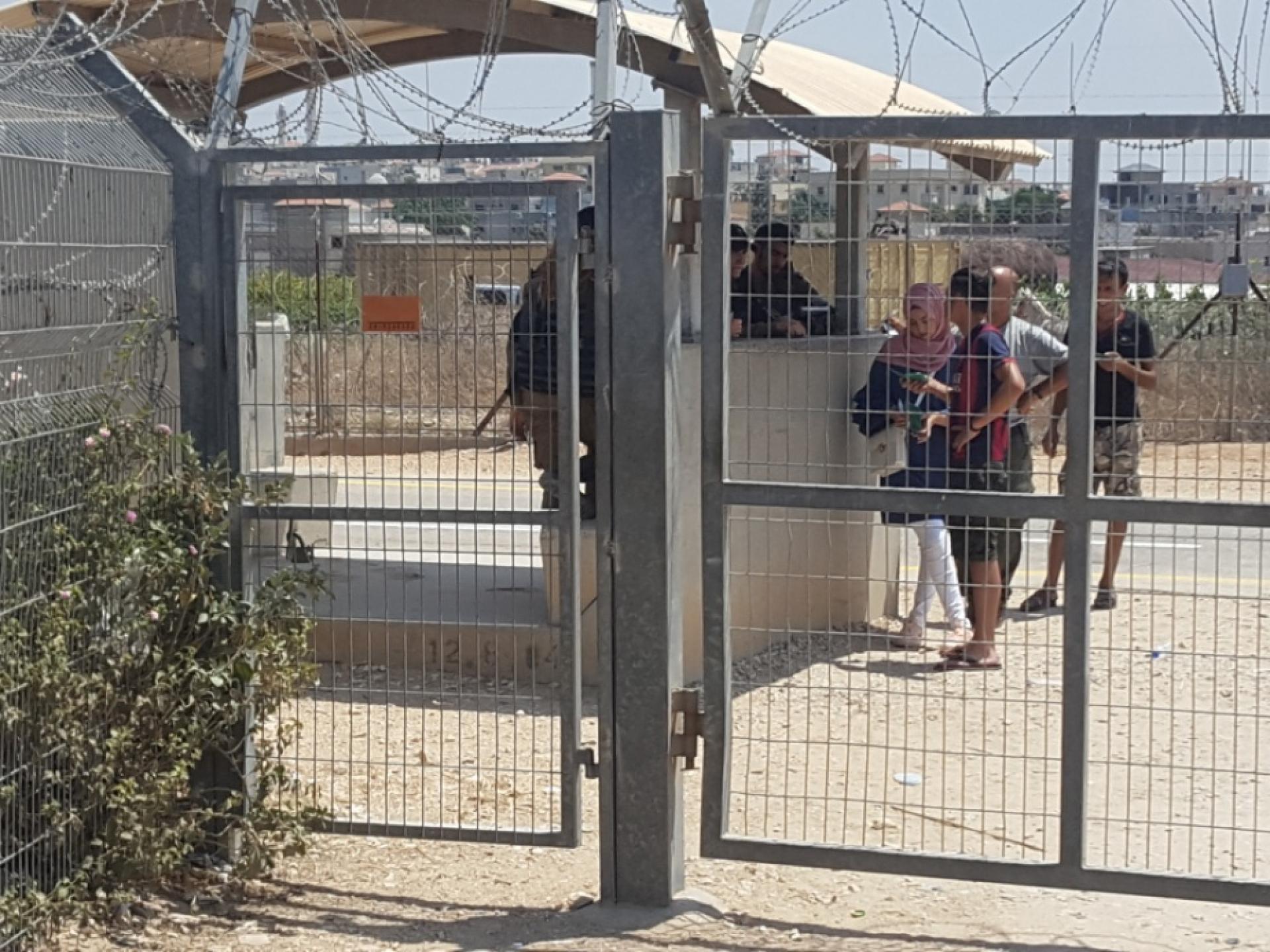 During the school holidays the children join in to help

Wounded horses from Jaljuliya and Qalqiliya arrive for treatment by the Veterinary doctor at Hable. The wound on the horse’s leg is an open one and looks very serious. We wish the horse well. 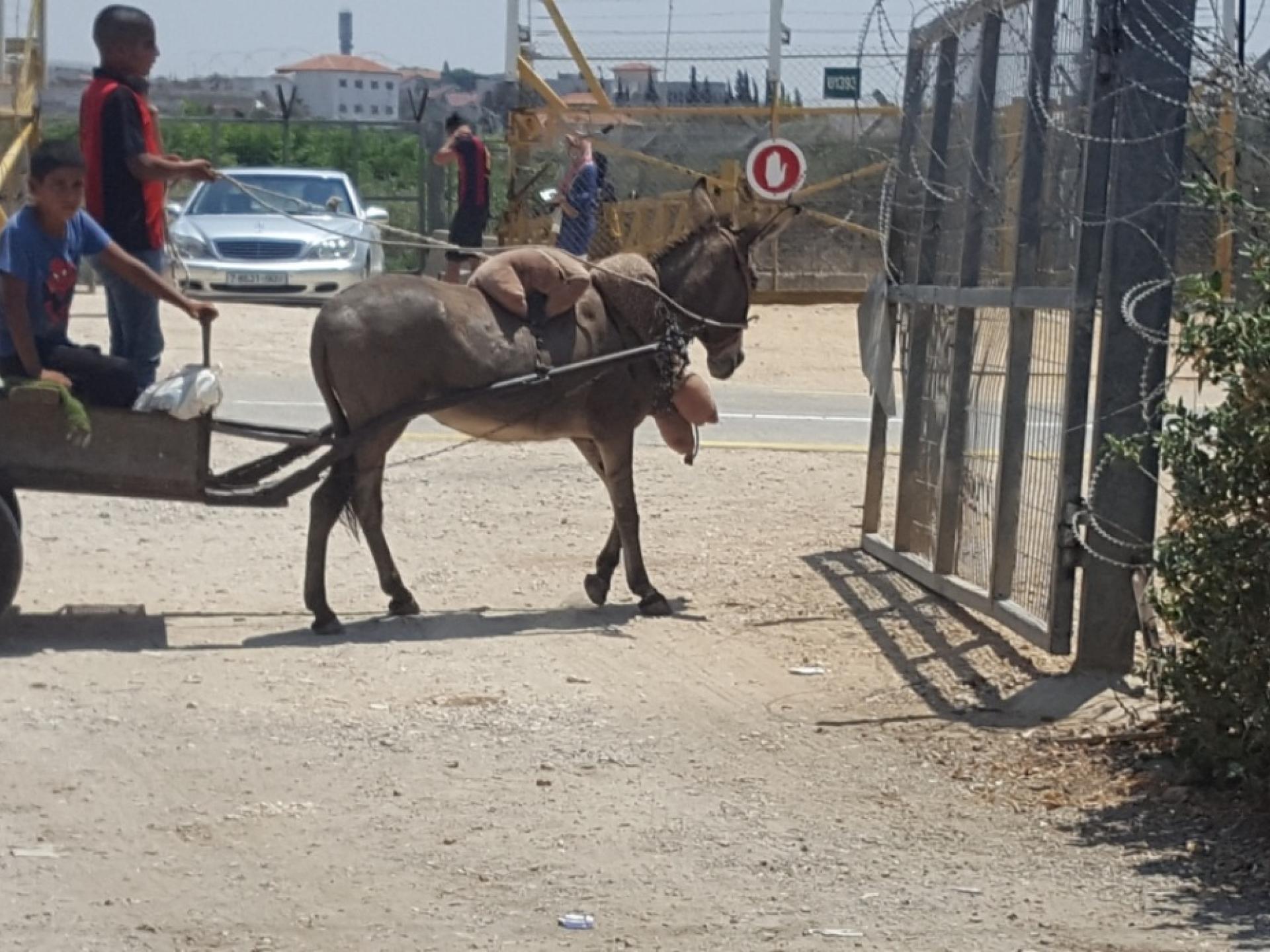 The children help in the summer
Photo:
Shoshi Anbar 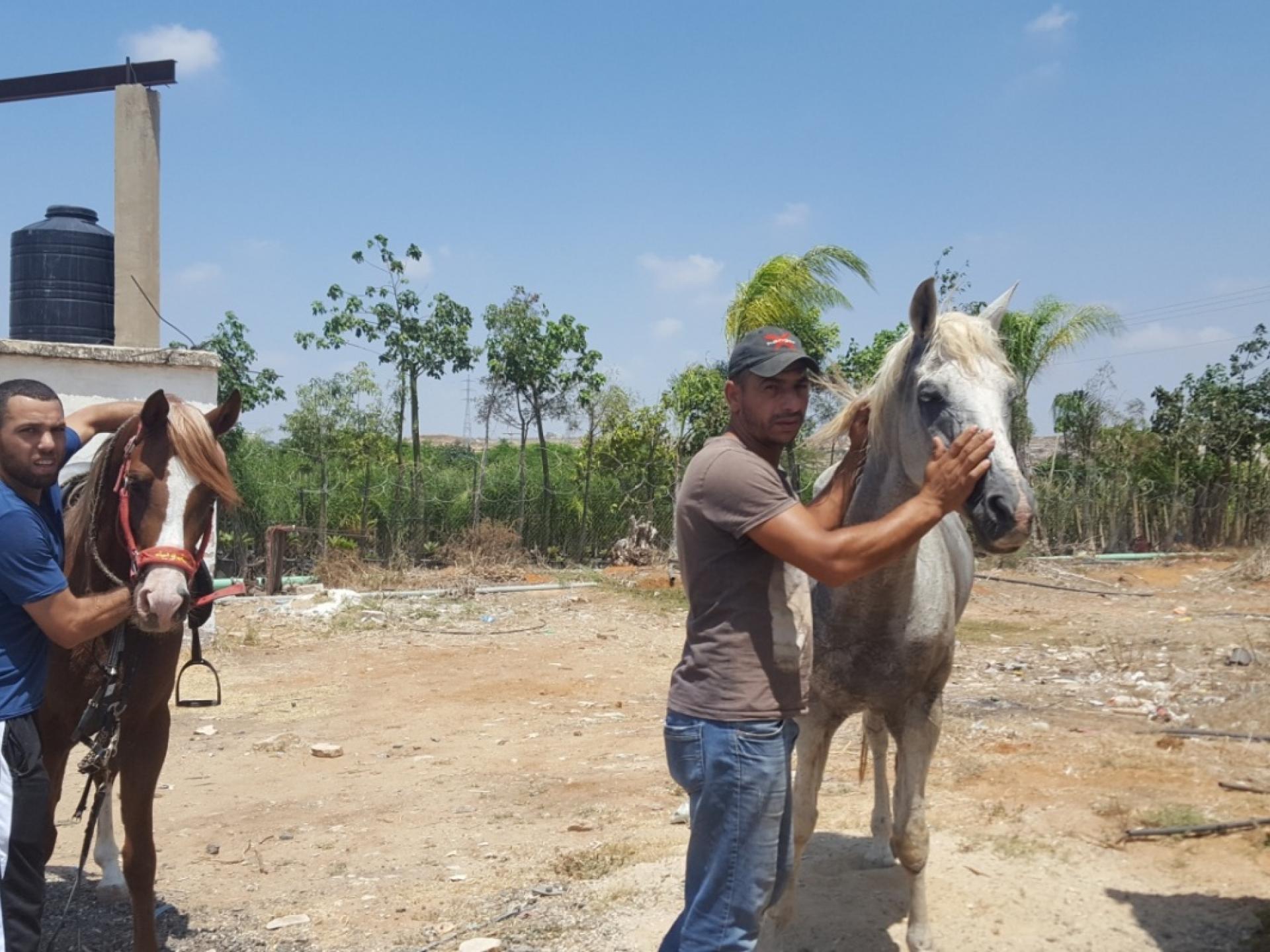 On the way to the veterinary doctor
Photo:
Shoshi Anbar

We have a conversation with O. at the plant nursery. The crew at the CP has been changed but there is no change in the situation as they are not permitted to pass goods. All the trucks with the seedlings have usually passed by the agricultural gate but a new, irrational rule, forbids them to pass with cargo, even seedlings. And O. asks: “what do they want?”. At the Eliyahu CP  each car, pichup truck, truck etc. are checked meticulously which forces the Palestinians to wait for hours. The cargo is dismantled by means of a forklift, each pallet is taken off the vehicle, and then the trained dog arrives to snuff. A. says “my passage depends on the dog. And if he is hungry, if doesn’t feel well…” . The excuse of couse is security, but there has never been any smuggling at the Hable CP. The bosses maintain that there hasn’t been a catch because the soldiers have no serious instruments for checking.

K., who is responsible for the passages arrived for a visit after he received Hanna’s letter. At this time the checking process is performed quickly and efficiently. The next day the civilian security men returned to their thorough work and the delays at the CP returned too. What has been performed in the past by 10 soldiers is now done by 30 security persons. We have already reported on the investment in the environmental development. Here one doesn’t economize. The Palestinians feel that they are being fed poison which gradually accumulates in their body until their death. O. swears that he will never cooperate with the Israeli General Security Service.

And what is foreseen for the future? In his opinion the final closure

of the Hable CP.